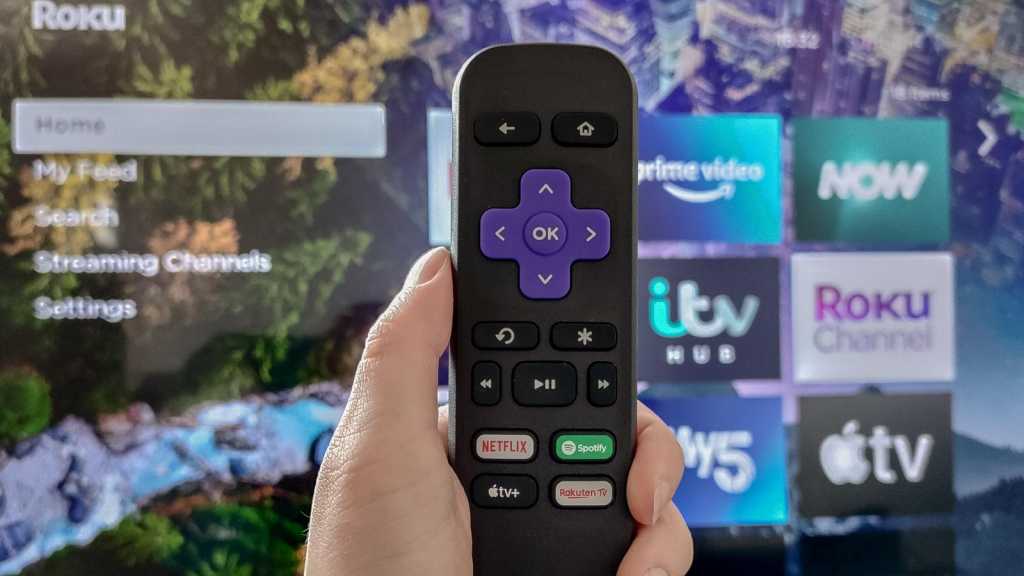 One of the best value streaming sticks you can buy – if you don’t mind using a second remote for your TV.

The Roku Express 4K is the latest streaming device from Roku that offers Ultra HD and HDR viewing at a budget price at under £40/$40.

The Express line from Roku has traditionally been associated with being the budget but basic alternative to flagship models, but this streamer offers nearly all the same bells and whistles of the previous Roku Streaming Stick+ for a competitive price.

But how does it hold up day-to-day?

The Roku Express 4K boasts the same curved shape as seen on the standard Roku Express. It has two ports – one to connect to your TVs HDMI slot, and one Micro-USB port for the power.

The device also comes with an adhesive strip, so you can stick it straight on the back of your TV and not have it lying around. It’s not a stick (aka dongle) like many. The matte black finish allows it to blend in nicely.

No additional extender cables are included in the box, so you’ll need to make sure that your socket is within close range, or alternatively, you can power it via a USB port. The setup guide states that the box needs to be within the line of sight of the remote. However, I stuck it to the back of my TV and used it with no issues.

This device also has Micro-USB ethernet combability, so if you’d prefer wired speeds for a stronger connection, this is doable. However, a dongle doesn’t come in the box.

The other main part of the Roku Express 4K is the remote. Roku’s remotes are great for accessibility, with big chunky coloured buttons that are clearly labelled, as well as a rectangular shape that’s comfortable to use.

There are buttons for playback, navigating the menu, opening the options bar and going to the home screen. There’s also hotkeys for Netflix, Spotify, Rakuten TV and Apple TV+.

Unfortunately, this remote can’t be used as a full TV remote, as you can with the Roku Streaming Stick+. There are no volume buttons, nor is there a power button on the UK model but there is in the US.

The interface does include a tile to turn off your TV, however, you’ll need to enable CEC on your TV (the method will depend on your model). In addition, the Roku will never be fully turned off unless unplugged at the wall – it will just be in standby mode. This is something to keep in mind if you like to be energy efficient with your tech.

Unlike the Amazon Fire TV streaming sticks, there’s also no voice support directly on the remote. However, you can still get voice support and other additional features via the official Roku remote control app.

The brand new Roku Streaming Stick 4K will have voice support, as well as Dolby Vision.

Once you download the app on your phone, it will automatically detect any Roku devices within close range, and you can then use it to navigate the interface, control playback and search for shows and movies.

Roku supports lots of different types of commands, and responded easily to ones that I tried out, such as ‘Play The Falcon and The Winter Soldier’ and ‘Open YouTube’.

There’s also personal listening mode, so you can listen to shows with your headphones via your phone. You can also cast photos and videos to your TV with the app – though some videos did not appear in the correct orientation.

Setting up the Roku Express 4K is extremely simple. Once you’ve plugged everything in and added the supplied batteries to your remote, you simply connect to Wi-Fi (Roku will list the strongest signal at the top), sign into Roku to confirm your device and then choose which channels and apps you want.

The new Roku OS 10 offers the choice to calibrate your 4K TV to get the best picture quality and you can also trigger a setting so that the box automatically adjusts each time for the most optimal performance.

The Roku Express can stream 4K HDR content along with 1080p and 720p up to 60fps, with support for HDR10 and HDR10+ (used by Netflix and Amazon Pirme Video respectively).

To get the full 4K experience, you’ll need to ensure that your HDMI cable is plugged into a port with HDCP 2.2. Not all 4K TVs have this, although it is likely if you have a fairly recent model. Roku’s set-up will tell you if that’s not the case. You can read up more in our guide to HDMI and Roku’s support page.

It’s worth noting that on the TV I tested ( Hisense A7100F) I had to go into the settings whilst using the Roku remote to grant access for 4K via the HDMI ports. Therefore, if you’re finding that your TV isn’t giving you the optimum quality, you may have to adjust the settings on your device.

There is also smart-home integration on the Roku Express 4K. You can get voice support compatibility with Alexa or Google Assistant-enabled devices, as well as integration with Apple AirPlay and Homekit.

Roku offers the majority of the major streaming apps, including Netflix, Disney Plus, Apple TV+, Now, Amazon Prime Video, YouTube, Spotify, All 4 and My 5. There’s only a couple of omissions – Amazon-owned streaming service Twitch isn’t available, for example. There’s also the Roku Channel, which includes over 25,000 hours’ worth of content completely for free.

Roku’s interface is simple and easy to navigate, with every section clearly labelled. Once you’ve cycled through a list, it will be repeated. I’m not a fan as I get confused about whether I’m at the end of my options, but that’s a personal preference. You can also change the wallpaper and screensaver to something a little more your taste.

There’s less focus on prioritising its own content like Amazon does with Prime Video. You have sections for the homepage (where your main channels sit), your feed, a search bar, streaming channels and settings.

The only slightly annoying thing is the sound that the interface makes every time you press a button, but this can be turned off. In general, the Roku Express 4K was extremely quick to respond, and I encountered no lag or issues with any of the streaming apps that I used.

The Roku Express 4K goes on sale in the UK in May. It costs £39.99, and you’ll be able to purchase it from the Roku website and major retailers such as Amazon, Argos and Currys PC World.

There is a version of the Roku Express 4K available across the pond for US$39.99 which you can purchase from the Roku website, Amazon US and Best Buy. This is actually even better value for money, as it includes a power button and volume controls.

For the price, this currently makes it the most competitive 4K streaming device on the market – outbidding the Amazon Fire TV 4K, Chromecast with Google TV and the Apple TV 4K (the latter by quite a large margin).

UK users desperate to have a power button or volume controls on the remote can check out the older Roku Streaming Stick+, which has dropped in price since it first launched.

For further options, take a look at our guides to the best streaming sticks and set-top boxes. You can also read more about what originals will be coming to the Roku Channel later on this year.

Roku continues to be a force to be reckoned with in the streaming space. The Roku Express 4K is simple to use, offers a broad range of entertainment and also gives 4K streaming on the lowest budget seen so far.

The lack of power button and volume controls (on the UK model) may be a let-down for some viewers, as will the lack of voice support on the remote itself. However, these are just minor niggles in what is overall a solid choice for a streaming stick.