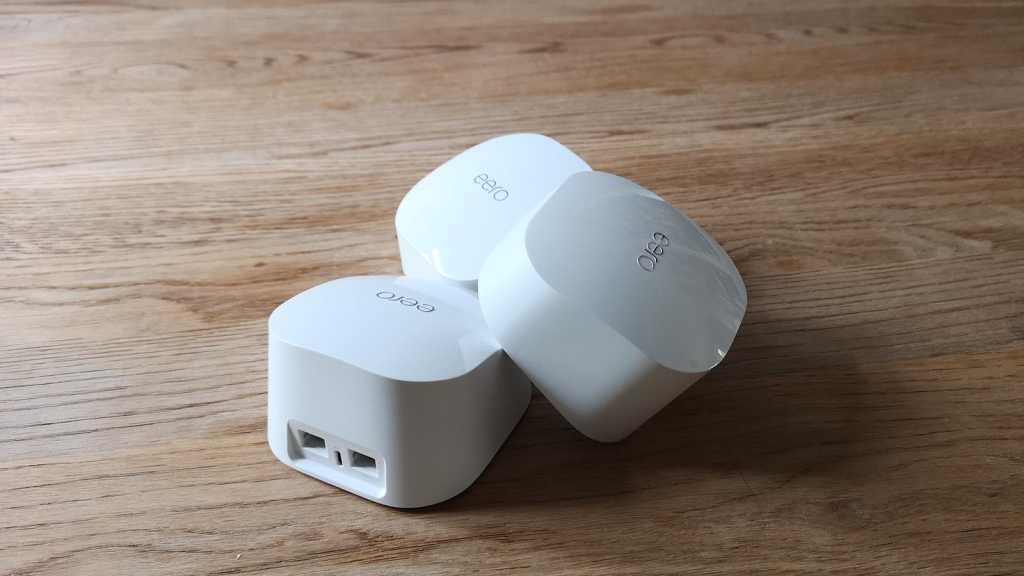 The Eero 6 offers fast Wi-Fi speeds and robust whole-home connectivity for a very attractive price. Incredibly easy to set up and use with lots of handy features via the well-made app.

The Eero 6 is the latest whole-home mesh Wi-Fi system to arrive from the Amazon-owned home networking company. The Eero 6 launched in the United States in late 2020, and now, it’s finally arrived in the UK.

The original Eero made waves when it arrived last year, as it offered customers struggling with wireless not-spots in their home a simple and effective solution – multiple hubs providing blanket coverage while using the same network name.

While lots of other networking devices have offered this exact same service in recent years, Eero’s proprietary TrueMesh technology, which aims to redirect connections to devices as and when required, and the clean and user-friendly interfaces, not to mention attractive prices, made the first generation of Eero stand out.

One thing that was missing from the tick sheet was support for Wi-Fi 6, the new wireless standard which basically means faster and more reliable Wi-Fi connections. As its name suggests, the Eero 6 addresses this.

Another nice addition this time around is an integrated Zigbee hub, which makes it easier to use Alexa to connect with compatible smart home devices – previously, if you wanted to do this with an Eero, you’d need to buy a separate hub.

That’s the new Eero 6 in a nutshell; here’s the full rundown.

Measuring a mere 99.4 x 97 x 61.4mm each, they’re dinky little things that hardly take up space on your desk. They look more like smart plugs without the pins.

Like all mesh Wi-Fi solutions, the Eero 6 hardware consists of a main unit – the Eero 6 router device – and several satellites, or extenders. The only physical difference between the router and the extenders is that the router has two Ethernet ports, while the extenders have none.

As the name implies, the router is the device you’ll connect to your existing modem with an Ethernet cable, and to all intents and purposes, can act as a standalone router. The extenders are the ones you’ll dot around your home after you’ve finished setting up the router, allowing you to extend coverage to those parts of your home where better Wi-Fi coverage is needed.

The review unit I was sent was a 3-pack, consisting of one router, and two extenders.

Eero promises us that this set-up is powerful enough to provide solid Wi-Fi coverage across 460 square metres (approximately 4950 square feet) of home space, while a single unit will cover around 140 square metres (1500 square feet). Interestingly, this is the same level of coverage that the original Eero system gives you as well.

The system is set up so that you can add more routers to your home network in lieu of extenders, should you need more Ethernet connections meaning they act like wireless powerline adapters.

If you want to use a wired connection for your TV set-top boxes, games consoles, desktop PCs, NAS drives and the like, you’ll need to consider getting an Ethernet bridge too – or pick up a mesh Wi-Fi system that gives you more ports.

Check out our round ups of the best mesh Wi-Fi kits and the best routers to see how the Eero 6 compares.

The Eero 6 uses the same simple set-up process that the original Eero does. This is good news, especially if you’ve never installed any home networking equipment before.

You’ll need to download the Eero app (iOS, Android) to get started. This guides you through every step of the process, with clear instructions and helpful animations.

Setting up a home network isn’t exactly what I’d call ‘fun’ but Eero has done a good job of making it kind of enjoyable – a cartoon dog will help you ‘sniff out’ good spots for Wi-Fi coverage, and the app will cheerily tell you if you’ve picked good locations for everything.

You’ll be asked to pair each Eero device with your phone via Bluetooth during set-up, but if that doesn’t work for whatever reason, you can manually input the serial number of each unit.

Once the Eero router is up and running, you’ll be able to give the network a name, as well as create a password for the network (so people can connect to it) and the admin password (so you can log in from a desktop device to configure settings in the future).

You’ll also need to tell the software which room in your house you’re setting the Eero router up in, i.e. your living room. When it’s time to set up the satellites, you’ll do the same thing – kitchen, study, bedroom, etc.

This helps you see at a glance, which devices are connected to the Internet throughout your house when you’re using the app.

From here, you can tap on a specific device, like ‘Tom’s MacBook’, see which access point and radio frequency it’s using, and if needed, assign each device to a personal profile. This lets you apply content filters to specific devices, and schedule pauses, if you wanted to do things like enforce homework hours (assuming no internet is required).

Setting up a guest network for when you have visitors is also a breeze, as is doing basic things like changing the network name and password.

New features include a usage dashboard that lets you see which devices on your network are the most data-hungry – handy if you’re keen to know which of your flatmates has been caning your connection with Steam downloads.

Another new feature is Eero Secure, a new security suite from Eero. Available in two versions (Secure and Secure Plus). This comes with a lot of features you’d see in most other security suites, like content filters, ad blockers and active network protection.

The more expensive Plus option (see prices below) throws in extras like an account for password manager service 1Password, the Encrypt.me VPN and Malwarebytes anti-spyware software. Depending on your current security and VPN set-up, this could be quite a convenient option, but you’re not obliged to sign up, of course.

If you’ve got any Alexa-compatible devices, you can also manage them through the Eero app too, thanks to the Eero 6’s built-in Zigbee hub. I wasn’t able to test out this particular feature in my review, as I don’t have any voice-activated hardware, Alexa or otherwise, at home.

Finally, you can play about with extra features in the Eero Labs section of the app. At present, there are just two features, local DNS caching, which should speed up load times of frequently-visited pages and WPA3 for devices that use the new encryption standard.

Here’s where you’ll see the main difference between the Eero 6 and last year’s Wi-Fi 5-only Eero hardware.

I performed multiple speed tests throughout my home with two devices, a Huawei Mate 10 Pro, and a RealMe X50 Pro – phones with Wi-Fi 5 and Wi-Fi 6 antennas, respectively. The results below are mean averages, rounded up. I’m using a Virgin Media Super Hub 3 (which I’ve set to modem mode when using the Eero 6) for comparison.

While it’s not a fair like-for-like comparison – the Super Hub 3 is just one dual-band router versus a mesh Wi-Fi product – the numbers demonstrate the benefits of using a multi-hub system instead of a standalone device:

As more and more devices hitting shelves now feature Wi-Fi 6 radios, your best bet is to look at the Wi-Fi 6 set of scores – anything new you buy this year phone or laptop-wise will likely be Wi-Fi 6-compliant. All your older devices with Wi-Fi 5 radios will still be able to connect to the Internet via the Eero 6, they’ll just do so at slower speeds, so refer to the Wi-Fi 5 table.

It’s worth noting that the first two speed tests here were taken while I was connected to the main Eero 6 router, which I’d set up in the living room. The drop in speeds can be attributed to the fact that there’s a brick wall between the router and the test devices, and the fact that I was, in both cases, switched to the 2.4GHz radio band.

The third test result was recorded while connected to the Eero set up in the office, towards the back of the house connected to the 5GHz band, while the garden test, taken while standing three metres away from the nearest access point in the kitchen saw me default to the 2.4GHz band again.

I really like that the Eero 6 very quickly moves you to whichever radio frequency is the most appropriate, depending on where you are in relation to an access point – the 5GHz radio frequency is notoriously not great at reaching through walls, whereas the lower 2.4GHz frequency is.

It’s slower, however, at handing over between the individual points themselves. For example, when walking into the kitchen from the living room – in other words, walking from one room with an Eero into another – I’d find that wireless speeds would drop and I’d still be stuck on the living room access point, despite being stood literally inches away from the kitchen access point.

The switchover would happen naturally after a minute or so, but if you’re a little impatient like I am, you’ll find it’s faster to simply disengage Wi-Fi on your phone, and turn it back on – your device will then connect to the nearest access point.

Hopefully, improved handover times will be rolled out in future software updates. It’s a small thing, to be honest, perhaps more noticeable by the fact that virtually everything else runs like clockwork.

You can pick up Eero 6 routers from Amazon and John Lewis in the UK, for £139, as well as single extenders for £99.

The 3-part Eero 6 package costs £279 from Amazon and the same from John Lewis – these bundles save you £58.

On Amazon’s Australian site, the Eero 6 router is going for $229, while individual Eero 6 extenders are $199 apiece. A pack with one router and two extenders costs $499 –  again, much cheaper than buying everything individually.

The Eero 6 offers fast Wi-Fi speeds, provides excellent whole-home coverage, works right out of the box, and is competitively priced.

It’s a simple and effective solution, aimed at people who don’t want to spend forever tinkering with Wi-Fi extenders and network names. Extra features, like Eero Secure security software, are there and ready should you want to use them adding value to buyers who, again, want to be able to secure their home network with minimal fuss.

You can get cheaper standalone Wi-Fi 6 routers, like the Honor Router 3, but that’s not set up to give you whole-home coverage. While the relative lack of Ethernet ports means this isn’t suitable for all households, in which case, something like the Netgear Nighthawk Mesh WiFi 6 might be more suitable, for under £300, you get a system which will deliver fast whole-home wireless coverage.