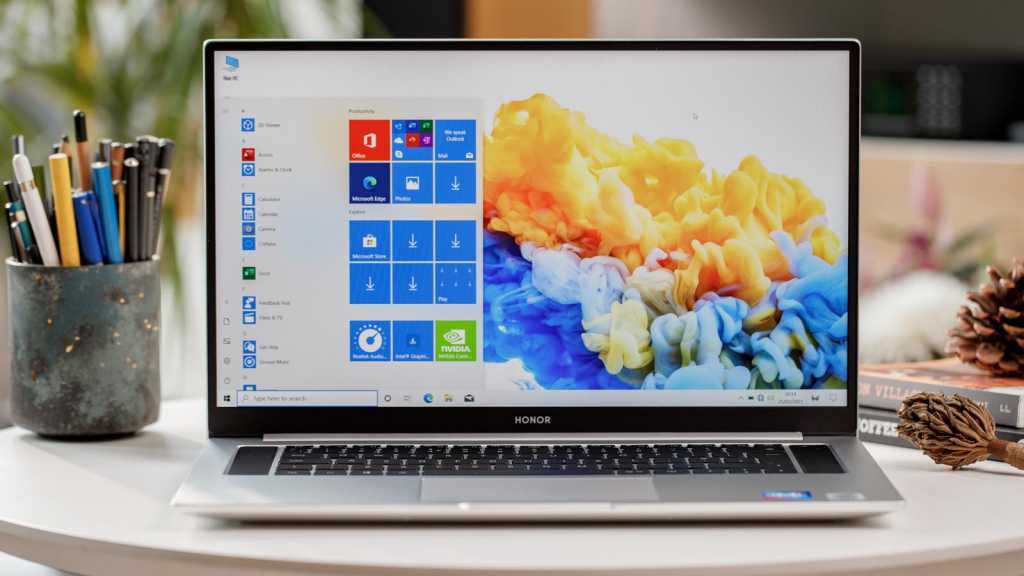 An attractive design, impressive keyboard and discrete Nvidia GPU makes the MagicBook Pro one of the best 16in laptops you can buy. Its main sub-£1000 competitor is the earlier AMD version, which delivers more well-rounded everyday performance.

Honor’s smartphone division has been hit hard by ex-parent company Huawei’s ongoing US trade ban, but there have been no such problems for its laptops. Unlike Google, Microsoft was able to obtain a special licence for Windows 10, allowing it to continue issuing software to Huawei. Around the same time, sub-brand Honor’s MagicBook line of laptop was beginning to make a name for itself, and it’s gone from strength to strength since.

The MagicBook Pro made its debut in Europe at IFA 2020, but without a high-end display or discrete GPU, it struggled to live up to the ‘Pro’ name. Despite launching after Honor’s split from Huawei, the new Intel version retains all the hallmarks of previous MagicBook Pro devices. With an appealing price tag and dedicated Nvidia graphics card, can this updated 16in PC compete with the best laptops you can buy?

I’m trying to approach this review without leaning too much on the AMD version, but it’s impossible not to where design is concerned. The Intel MagicBook Pro looks identical to its earlier sibling, with a sleek, minimalist aesthetic and Mystic Silver finish. There’s also a Space Gray model, but I’d have liked to see more vivid colour options. This muted design language means there’s little else to report externally, aside from a reflective Honor logo on the rear.

As you might expect from a 16in laptop, this is by no means a small device. The MagicBook Pro features slim bezels in order to minimise its total footprint, but still comes in at 36.9cm wide and 23.4in high. This will take some adjusting to if you’re used to 13in or 15in PCs, and it takes up significantly more space on a desk.

Despite these sizeable dimensions, the MagicBook Pro remains relatively portable. It comes in at around 1.7kg – I wouldn’t call this lightweight, but laptops of this size often exceed 2kg. I’d have no problem moving the device between rooms or throwing it in a bag for travelling.

Flipping the device open reveals the 16in display, which I talk about in more detail below. It’s flanked by some very slim bezels, giving the device an impressive 90% screen-to-body ratio. Combined with wide viewing angles, it helps deliver a more immersive viewing experience.

Despite offering relatively little travel, the keyboard is a joy to use. Each key feels clicky and responsive, and I rarely had to glance down from the screen while working. The keyboard is backlit, although there are only two brightness options. The large trackpad also offers a convincing navigation experience, although I’d still recommend connecting a mouse for long-term usage.

The MagicBook Pro could easily accommodate a separate number pad, but Honor has used the extra space for a pair of front-facing speakers instead. Its decision is justified here, with the MagicBook Pro delivering detailed, rich audio that surpasses many modern laptops. The speakers are still slightly lacking when it comes to bass, though, so don’t expect them to replace dedicated audio equipment.

The right grille is where you’ll find the power button, which also doubles as a fingerprint scanner. It’s easy to set up and offers a reliable method for quickly unlocking the device, although it is quite sensitive to moisture.

That’s your only biometric unlock method, as the pop-up webcam is built into the row of function keys and doesn’t support Windows Hello. It’s what allows Honor to keep the bezels extra slim, but the angle of this sensor is deeply unflattering. I’d have rather seen thicker bezels in exchange for a more traditional webcam placement – a physical shutter could be used to protect privacy.

The MagicBook Pro features a 16.1in, 1920×1080 LCD panel, the exact same as you’ll find on the AMD version. I had no problem with the resolution or lack of OLED for everyday work, but creatives might not feel the same. It covered the full sRGB colour gamut, but only 79% for DCI-P3 and Adobe RGB respectively. There are definitely more colour accurate displays out there, although it’s unlikely you’ll notice while web browsing or watching Netflix.

It also has a 16:9 aspect ratio, once the industry standard but something which has now been replaced by taller 16:10 displays. It means the screen isn’t as tall as you you might be used to, but it doesn’t affect the viewing experience too much.

However, it only hit around 329 nits at maximum brightness. That’s slightly higher than we recorded on the AMD version, but still means visibility is poor in bright environments. It’s also still stuck at 60Hz refresh rate, meaning you won’t get the full benefit of that Nvidia GPU while gaming.

There’s also no touch support, something we’ve seen on many Honor laptops in the past. It would have been useful on this large display, with a big gap between keyboard and screen helping avoid accidental touches.

The only differences between the two MagicBook Pro models come under the hood. This version swaps the mid-range AMD Ryzen 5 4600H for the Intel Core i5-10210U. Unfortunately, this is a 10th-gen processor and so not from the latest Tiger Lake series. The 11th-gen chips launched back in September, so it’s strange to not see them on Honor’s ‘Pro’ branded laptop.

However, there is a trade-off here. While you don’t get the latest and greatest Intel silicon, you do get a Nvidia GeForce MX350 discrete graphics card. By comparison, there’s only an integrated GPU on the AMD version. This gives the Intel version a crucial upper hand for tasks like gaming and content creation, which usually puts increased load on the GPU. It’s still not quite a Pro-level device – there are occasional hiccups and stutters – but it delivers a convincing high-end experience.

Still, everyday performance on both MagicBook Pro devices was solid, with very little slowdown across email, word processing and web browsing. It’s aided by 16GB of DDR4 RAM, while a 512GB SSD means you won’t be running out of storage anytime soon. However, that’s not necessarily reflected in the below benchmarks, where there’s a significant drop-off compared to the AMD version:

The Intel and AMD MagicBook Pro model have the exact same 56Wh battery. That’s fairly average by modern laptop standards, and means any variation in battery life is determined by the power efficiency of the CPU and other components.

In our 720p video loop test, I recorded 9 hours and 7 minutes before the laptop put itself to sleep. The AMD version was streets ahead in this regard, lasting 12 hours and 53 minutes in the same test. It’s strange to see such a disparity between the two results, but goes to show that there’s more to battery life than sheer capacity.

There’s also more to it than benchmarks, though, and I was confident of getting a full eight-hour workday from a single charge. You’ll probably need to plug in at the end of the day, but that’s more than acceptable for most people.

When you do, the 65W adapter included in the box got me 46% charge in just 30 minutes. That’s identical to the AMD version, making it great for a quick top-up before heading out.

Unlike many modern laptops, the Intel MagicBook Pro is available in just one configuration in the UK. That pairs the i5 processor with 16GB RAM and a 512GB SSD, and costs £949.99 (approx. US$1,320). That’s £100 more than the equivalent AMD version, although the inclusion of the GeForce MX350 will make this worth it for many people. The device isn’t widely available in the US, but you can still buy one from Geekbuying. As is the case in China, both i5 ($1169.99) and i7 ($1279.99) versions available from Geekbuying.

Both laptops are significantly more expensive than the regular Honor MagicBook – these are pitched as the high-end devices from a company that usually targets affordable markets. There are plenty of great alternatives in our best laptop chart, but few can match the MagicBook Pro for screen real estate. In that regard, the LG Gram 16 (from £1,249/US$1,199) provides the most obvious direct competition, while the Gram 17 (from £1,349/US$1,600) and Dell XPS 17 (from £1,799/US$1,399) are also worth considering.

If you’re set on a big-screened laptop, the MagicBook Pro has almost no similarly-priced competition. Just make sure you choose the right model – the AMD version is superior for everyday performance, but the Intel device comes out on top for more graphically demanding tasks.

The Honor MagicBook Pro delivers a compelling 16in laptop experience, at a price that undercuts many similarly-sized rivals. This Intel version uses older 10th-gen chips, but pairs it with a GeForce MX350 GPU for solid all-round performance. It excels at more demanding tasks, although the cheaper AMD version is a better bet for everyday use. Judging by benchmarks, the latter also comes out on top for battery life.

Much of the other features are consistent across both devices. You get an attractive design, superb keyboard and razor-thin bezels. However, the display is fairly mediocre and the pop-up webcam impractical for video calls.

However, if you’re looking for a 16in laptop but don’t want to pay well over £1000/US$1000, it’s easy to recommend the Honor MagicBook Pro. This Intel version makes a compelling case, even if there are familiar shortcomings.