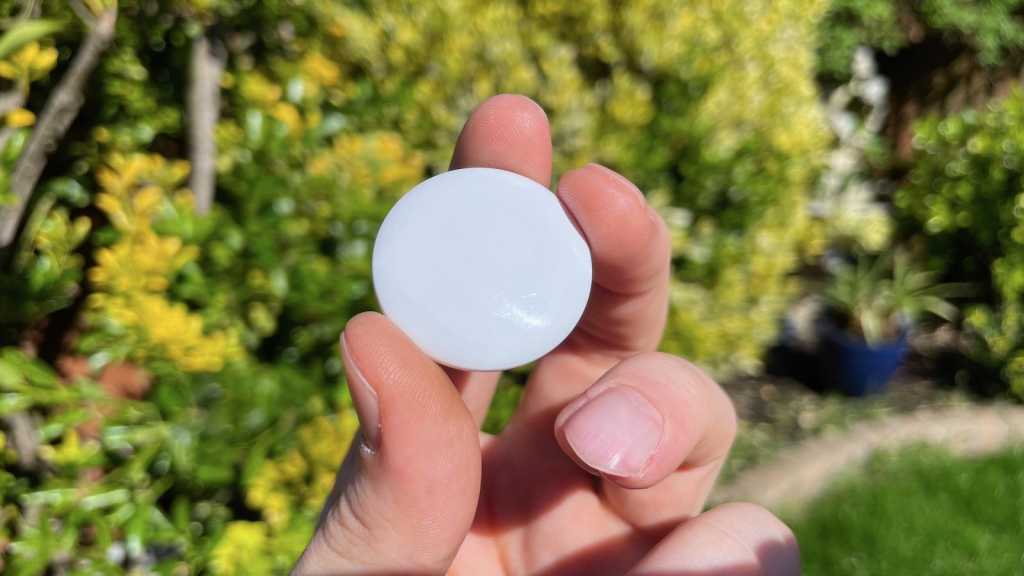 The AirTag is a capable tracker with unique benefits including the Find My network and Precision Tracking, but the reliance on accessories may put some off.

After months of leaks and rumours, Apple’s AirTag is finally here and, when combined with the billion-device-strong Find My network and ultra-wideband-based precision tracking, it has the potential to be one of the best Bluetooth trackers in 2021.

However, Apple’s clean design ethos means the AirTag isn’t the most adaptable tracker around, requiring a bevy of accessories to attach it to your keys, rucksack and other valuables. The question is, does the AirTag offer enough to compensate for the added cost of accessories? For the most part, the answer is an unequiovcal yes.

AirTags look great when you take them out of their packaging, but both the front and rear are prone to scratches, with marks appearing on mine within hours.

It has a diameter of 31.9mm and is 8mm thick, roughly the size of a £2 coin. It’s lightweight at only 11g, which makes it easy to pop an AirTag into a wallet or rucksack and forget about it until you need to find it.

Like other trackers, the AirTag can play a tune to help you locate it when nearby, but there isn’t a speaker output anywhere on the tracker itself. Instead, Apple uses the curved shell of the AirTag itself as a speaker, and it has surprising volume and clarity, allowing you to find your keys (or anything else you’d like to track) by ear when they inevitably fall out of your pocket and down the side of the sofa.

The lack of a traditional speaker also helps the AirTag achieve its IP67 water resistance rating, meaning it’ll survive the heaviest rain and even being submerged in up to 1m of water for 30 minutes.

Apple has designed the AirTag to be environmentally friendly, allowing you to change the CR2032 battery once it’s run out – a process that’ll take around a year, according to Apple. Simply push and twist the stainless steel back to reveal the coin-type battery inside.

While it’s a much more environmentally friendly alternative to ‘disposable’ trackers such as the Tile Slim, which are useless once their battery dies, there are concerns that the AirTag battery is too easily accessible and could pose a choking hazard to children – so much so that one Australian retailer has pulled it from shelves already.

The back easier to remove on the AirTag than trackers from Tile, Chipolo and Samsung, so if you do have small children, it might be worth looking at an alternative from our selection of the best Bluetooth trackers.

The big problem with Apple’s drive for clean design here is that there’s no way to attach the AirTag to a keyring or a dog collar. Other Bluetooth trackers tend to have a hole for a keyring, making the AirTag comparatively less adaptable without the use of (costly) accessories – of which Apple, of course, makes plenty.

Amazingly, these cost as much as – if not more than – the AirTag they’re carrying. The selection starts with the £29/$29 polyurethane AirTag loop and £35/$35 AirTag leather keyring, and goes all the way up to the premium AirTag Hermès Luggage Tag at £399/$449.

They’re great quality accessories, make no mistake, but it’s hard not to see them as a money-making exercise when Apple could have put that keyring hole in the AirTag somewhere.

The good news is that accessories from third parties are already available for a lot less than Apple’s official options. And, putting an AirTag in a keyring holder makes the battery harder to access for your kids.

You might not need a keyring or any other accessory if you can slip it into a rucksack pocket or wallet, but you’ll want the AirTag to be clearly visible to anyone that comes across it in the event your item does get lost – more on that later.

The AirTag setup process is as simple, but you will need an iPhone or iPad running iOS 14.5 or later. And note that you cannot pair an AirTag with Android. Sorry, Android users.

Simply pull the plastic strip out of the AirTag to activate the battery – a chime indicates it has power – and bring it within 20mm of your iOS device. You’ll then go through a quick step-by-step setup that’ll let you rename the tracker, assign an emoji and most importantly, link it to your Apple ID.

Once that’s all done, you’re free to attach your AirTag to the item you’d like to track. Whenever it comes within range of any iPhone or iPad running iOS 13 or later, the location will be updated in the Items tab of the Find My app. It’s all done via Bluetooth LE, with no need for a Wi-Fi connection.

So, what do you do when you inevitably misplace your AirTag-equipped bag or keys? There are a few options, all accessible via the Find My app or Siri. Once you tap on the item you’d like to locate within the app, you can either play a sound or use precise tracking to hunt it down.

As described earlier, the former makes the AirTag play a little chime on repeat to help you locate it as you wander around your house. It’s loud enough, but obviously it’s quieter if the AirTag is covered by clothes or a pillow. For those situations, the better option is precise tracking – and it’s a complete gamechanger for Bluetooth trackers.

You see, inside the AirTag you’ll Apple’s proprietary U1 chipset, technology also found in the iPhone 11 and 12 as well as recent iPads and the HomePod Mini. The U1 chip utilises ultra-wideband (UWB) technology to provide precise distance-based tracking that is also used for features such as hand-off between the iPhone and HomePod Mini, but the best implementation so far is with the AirTag.

If you’ve got an U1-equipped iPhone, you can tap the appropriate button in the Find My app to access precise tracking. Using a combination of U1 tech and information from your iPhone’s gyroscope and camera, your iPhone will make a connection when roughly within 40ft of the AirTag and direct you towards the accessory.

It does this using a combination of on-screen arrows, distance readings, haptic feedback and audio cues, with the latter two enabling those that are visually or audibly impaired to find AirTags easily.

It’s impressively accurate once the connection has been established, but I found the precise tracking performance varies when introducing obstacles like walls and doors. If there are walls between you and your AirTag, you’ll have to be much closer – sometimes as little as 10ft away – before precise tracking kicks in.

If you have an iPhone X or older, you won’t be able to use precise tracking.

But for those with an iPhone 11 or newer, the AirTag will stand out from the other Bluetooth trackers on the market.

One feature that’s missing is that the AirTag doesn’t currently offer separation alerts. This is handy if you leave your keys in a coffee shop and walk away, for example – and is what some would consider basic tracker functionality. It is possible that this could be added in a future iOS update, though.

Finding AirTags around the world

But what if you lose your AirTag-tracked item when out in the big wide world? That’s where Apple’s Find My network really comes into its own, separating itself from established trackers like Tile.

You see, while Tile relies on smartphones that have the Tile app installed, and Samsung’s Galaxy SmartTag relies on Samsung phones, Apple’s Find My system simply needs an iPhone or iPad to be nearby to anonymously update your AirTag’s location. Given that there are over 1 billion iPhones and iPads in use according to Apple, that’s a vast-reaching network, and it’ll only get bigger as more people buy Apple products going forward.

That means that you’ll likely get an up-to-date location for your AirTag if it’s in a relatively populated area – although the same can’t be said of more rural locations where there are fewer people and thus fewer iPhones and iPads for the AirTag to piggyback off.

There’s a dedicated Lost Mode available via the Find My app for when you’re confident that your lost item isn’t nearby. This marks your AirTag as lost, and if someone with an iPhone or Android device finds it, they’ll be able to get the name, email and phone number linked to your Apple ID to contact you and (hopefully) reunite you with your lost item.

It’s actually easier to identify a lost AirTag on an Android than an iPhone, with an Android user only needing to hold the AirTag near the NFC tag on the smartphone to get contact information. iOS users, on the other hand, need to go to the Find My app, select the Items tag and tap identify lost AirTag.

Of course, with such an expansive network, there are fears that some could use it to unknowingly track others, but Apple has implemented ‘stalker-proof’ features to help avoid this. The big deterrent is that you’ll be notified on your iPhone if you’re travelling with an unknown AirTag if the owner of the AirTag is no longer nearby. Those on Android need not worry either, as the AirTag will also make a noise if it’s not near the owner’s iPhone or iPad for more than three days, alerting you to its presence.

That’s a fantastic move to stop people abusing the tracker, there’s no denying it, but it also makes it easy for thieves to identify an AirTag hidden in a stolen item and remove it, making it more difficult to retrieve stolen valuables.

We discuss the anti-stalking features among other pros and cons of the AirTag in Episode 64 of Fast Charge, our weekly podcast:

While some were initially worried that, being an Apple product, the AirTag would be overpriced compared to the competition, but that’s not the case. The AirTag is available for £29/$29, and there’s also a four-pack available for £99/$99 if you want to track multiple items.

That’s in line with the likes of the Tile Pro and Samsung Galaxy SmartTag, although you will admittedly have to buy additional accessories if you want to connect the AirTag to an item – something not required by most alternatives.

You can buy AirTags directly from Apple (where you’ll also be able to customise the trackers) and third-party retailers like Amazon. We outline where to buy Apple AirTags in the UK & US separately if you want more options.

Apple’s AirTag is a great little Bluetooth tracker with genuine innovations such as the UWB-based precision finding and anti-stalker features, and it’s both small and lightweight too.

With over 1bn iPhones and iPads making up Apple’s Find My network, it casts a wider net than competing alternatives from Samsung and Tile, likely resulting in more frequent location updates when you do misplace an AirTag-tracked item. The Find Mode is equally handy, allowing anyone to quickly scan an AirTag to get your contact information – as long as they’re aware of how AirTags work, that is.

Aside from the need to have a recent iPhone to use precise tracking, the only real drawback is the lack of a keyring hole on the AirTag, forcing you to buy accessories to connect the tracker to keyrings, bags and other valuable items. That and the fact that Apple’s accessories can cost more than the AirTag itself. There is a healthy market of cheap third-party alternatives, but that’s not something you’d have to worry about at all if you went for a Tile Pro or Samsung Galaxy SmartTag.

Still, if you have a recent iPhone or iPad, the AirTag is a great Bluetooth tracker.