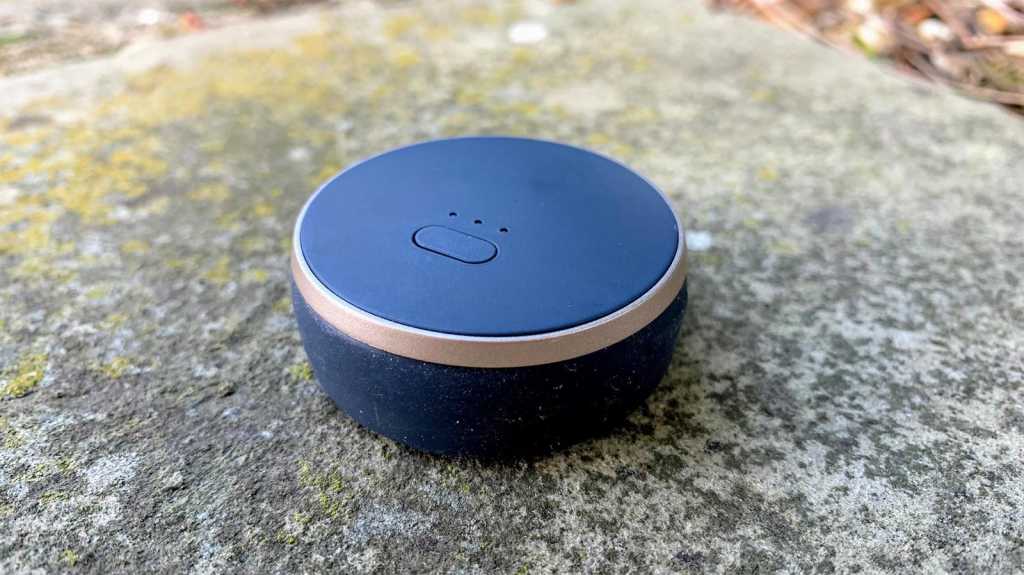 The Curve does its job pretty well. It isn’t perfect, but it gives you an accurate location for whatever you’re tracking so long as there’s a GPS signal and Vodafone coverage.

Being able to keep track of something valuable, and locate it when it goes missing, is something that has been a reality for years. What’s interesting about the Curve is that it combines various technologies which are usually used in isolation to form a ‘super-tracker’.

It has GPS, but can also use Bluetooth at close range to make it easier to actually find whatever it’s attached to.

On top of that, it also has Wi-Fi and – as it’s a Vodafone product – a SIM so it can update you on its location in 90 countries.

Then there’s the price. At just £20, it’s cheaper than an Apple AirTag, Tile Pro and Chipolo One, all of which lack GPS and are only really useful for tracking lost keys and other items around your home.

They do have the ability to be tracked via other users’ phones, but even with millions of iPhones and other Apple devices that can help track AirTags, there’s no substitute for GPS which can tell you exactly where the tracker is located at all times.

The ‘all times’ part is true, but with the Curve you have to trade off the frequency of updates with battery life.

There are four modes. In Power Saving, it will report its location every two hours and last seven days. In Everyday mode, it will update every half hour and last about five days.

Performance mode gives you updates every five minutes and a full battery will last about three days.

There’s also a realtime mode which will – as you’d expect – give you realtime tracking, but is limited to 15 minutes at a time.

The tracker itself is circular and is a similar size and weight to a car key fob.

There’s a button on the side, which is used to turn it on and off and a second button on the front that’s for sending an on-demand location update to the app. It’s hard to think of too many situations where this could be useful, though. If it’s attached to a pet or a valuable, they can’t press the button.

Vodafone says it’s not designed to track people and if you did plan to give it to a child to keep track of them, note that you can track their phone’s location with an app as smartphones all have GPS built-in.

There are three status lights, and it’s a shame they’re not labelled. This is partly because the green LED doesn’t look very green – more amber. There’s also a white and orange LED and until you can remember what they mean, they’re not helpful at all.

Green, for the record, means the Curve is fully charged or, when not charging, that’s it’s on and connected to the Vodafone network. The USB charging cable is magnetic and proprietary, so you don’t want to lose it.

In the box are two rubber bands, one including a loop for attaching the tracker to something else such as a keyring, which could then be attached to a dog’s harness.

Vodafone says the Curve is IP67 water resistant which means it can survive being fully immersed in water for 30 minutes.

Setup involves downloading the Vodafone Smart app, switching on the Curve and connecting it to the app. You then choose a subscription – either £3 per month for 12 months or £2 per month for two years. Note that you don’t need to have a Vodafone SIM in your phone: the Curve will work even if you’re on EE, 02 or another network.

Once up and running, you can see the Curve’s location on a map in the app.

The app also lets you change the tracking mode and, if you choose realtime, will show a countdown timer starting at 15 minutes.

I found the realtime mode worked well, with the location updating every couple of seconds and being as accurate as you’d expect from GPS. If you use the Curve to remember where you parked your car at the airport, you’d easily be able to find it again.

It’s only when the GPS signal could be blocked – such as in a multi-storey car park – where this may not work well.

In modes other than realtime, the location will update less frequently according to what you’ve set it to. But the app will show you how long it has been since the location was last updated. Sometimes it can take a while to refresh the location when you open the app, but enabling realtime mode only took a few seconds each time I tried it.

By default, it won’t show you the Curve’s route on a map – the sort of thing you see when you use a GPS-equipped fitness watch to track your runs. It will only show the current location.

However, if you tap “Start walk”, it will show a route on the map. You’ll be able to see  this in the History tab, too, along with a timeline of locations – you can tap those to see the address on a map.

You can also set up zones, so when the tracker arrives in or leaves the zone (such as ‘home’) you’ll get a notification. Not instantly, mind. Sometimes it can take quite a while before the app shows those because it will depend upon the mode the Curve is set to. In Power Saving mode, that’s every two hours, and if the location was updated last just before moving into or out of a zone, it could be almost four hours before you see the notification.

Obviously, if you have lost an item, GPS tracking will help you get close to it but it’s the Bluetooth that can reveal its exact position. This is a recent update which has also been rolled out to existing users.

Unfortunately, in testing I found I had to be very close to the Curve – within a few metres – in order to hear it beeping: it’s just not very loud. Vodafone claims a 5m range, which is around a tenth of the range of the best Bluetooth trackers.

The white LED flashes, but again, it isn’t that bright, so isn’t easy to see unless it’s dark.

If the Curve is buried under other things, such as a cushion or a coat, its buzzer becomes even more difficult to hear. Both the Tile and Chipolo are much louder and easier to find.

The Bluetooth finding range was also smaller than Tile and Chipolo. If there’s a wall or another obstacle between you and the Curve, chances are the app will tell you it’s not in range and won’t let you sound the ringer.

At £20, the Curve is less expensive than some Bluetooth trackers. The monthly subscription prices aren’t bad either, especially if you opt for two years.

There’s no rolling monthly option, though, and the warranty lasts only one year, which is disappointing.

You can buy a Curve from Vodafone, but it’s also available from Amazon and Argos.

Note that you cannot buy charging cables separately, but they are available on ebay if you need them.

Depending upon what you want to use it for, the Curve can be a good choice. It’s the price of a Bluetooth tracker but, for a small monthly fee, can be tracked just about anywhere there’s a GPS signal.

This makes it ideal for dog owners, especially with the recent increase in thefts.

You can remotely change the mode via the app, allowing you to save battery power when you don’t need frequent location updates, then get realtime updates when you do.

It’s a shame the app doesn’t overlay a route on the map but the real niggles are the quiet beeper and small Bluetooth tracking range.

Before you buy one, be sure there’s good Vodafone coverage in the area you want to use it as the mobile signal will play a large part in whether it works well or not.

Battery life is ok: it’s limited by the size of the Curve, so if you’re looking for something that lasts for longer, you’ll need to look elsewhere. One alternative is the SpyTrack Nano.