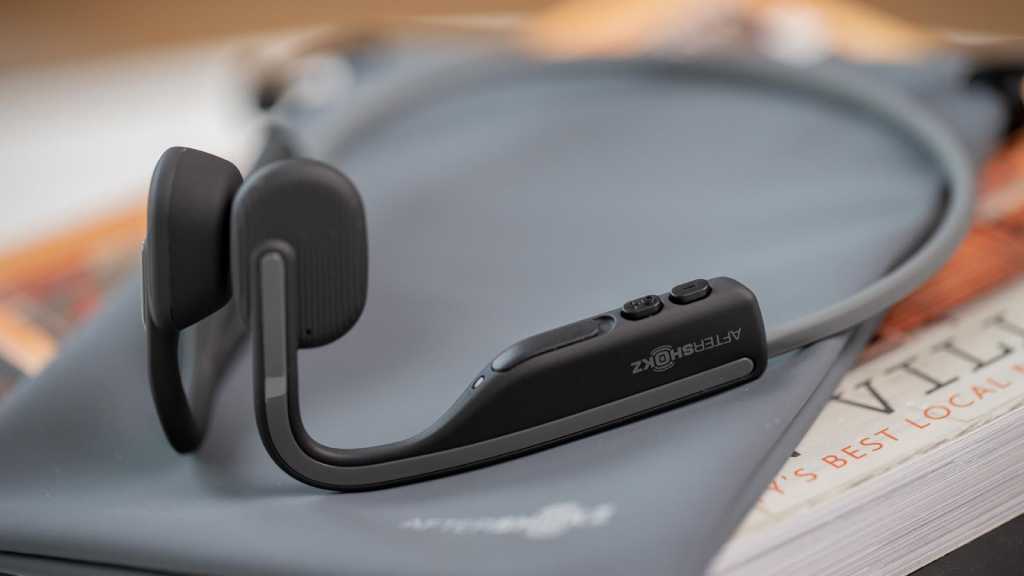 The price, fit and battery life are all pleasing, and bone conduction has its advantages. But audio quality simply cannot match what you’ll get from more traditional headphones.

The OpenMove headphones from AfterShokz have a simple design and an affordable price tag, but the final verdict is likely to depend on your feelings about bone conduction technology. They bypass your eardrum and pipe audio through your cheekbones directly into your inner ear, a strategy that brings a plethora of pros and cons.

In our in-depth AfterShokz OpenMove review we help you decide if bone-conducting headphones are for you, and if so, whether these are the right ones for you to buy.

Pairing with a smartphone (an iPhone 12 Pro) proved straightforward: you enter pairing mode by turning off the headphones and holding the volume+ button until the LED flashes red and blue, then select the headphones in the phone’s Bluetooth menu. It’s not as easy as connecting a pair of AirPods, but still pretty painless.

What is rather less straightforward is a feature called multipoint pairing, whereby you pair with two audio sources at the same time – sort of. Setup for this is rather laborious: you have to activate multipoint mode, then power off, enter pairing mode, connect with device A, power off, enter pairing mode again, connect to device B, power off yet again, and finally power on to find that both devices are connected.

The way this then works isn’t very well explained in the manual, and you certainly don’t (or I certainly couldn’t) hear audio from both at once. Rather the headphones play the audio from whichever device is currently outputting, with the one that started first seemingly given priority if both are. In practice this just makes it easier to switch from a YouTube video on your Mac, say, to a song on your iPhone.

The AfterShokz use Bluetooth 5.0 and maintained a connection reliably throughout testing.

These are open-design headphones, with the arms hooking over your ears and nestling against your cheekbones rather than covering your ear canal. They connect to audio sources wirelessly, but the two arms are connected by a hard neckband.

There’s a robust-feeling chunkiness to the OpenMove design. You don’t get a sense of luxury – which is fair enough, given the price tag – but they do feel like they could cope with being dropped. Not that drops are likely, given the quality of fit, but we’ll get to that in a later section.

They’re also able to deal with sweat and rain thanks to a moderate IP55 rating. A quick glance at the IP ratings shows this certifies them as being capable of handling “water projected by a nozzle from any direction”, but not immersion. Don’t take them swimming.

Aesthetically the headphones are quite basic. The designers have gone for the classic matt/gloss contrast, with a shinier rib of plastic carrying on the colour of the band into each matt-plastic earpiece, which looks reasonably smart. The grey model, which I tested, has a 1980s Casio watch flavour, but the white, blue and pink finishes are a bit livelier to look at.

The controls are a little unusual in being split between the left and right arms. (Headphones often cluster these together on one side, usually the right.)

The main button is on the left, and it’s easy to miss at first: the shiny rib that runs along each earpiece is slightly raised on this side, and can be pressed once to pause or play music, twice to fast forward and three times to rewind.

The makers actually call this a multifunction button, and they’re not kidding. Depending on context it can also be used to answer or reject calls, redial the last number (which I did once by accident; watch out for that), bring up Siri or another voice assistant on the paired device or even change language. A handy range of options, but a little intimidating, particularly when you’re new to the product. 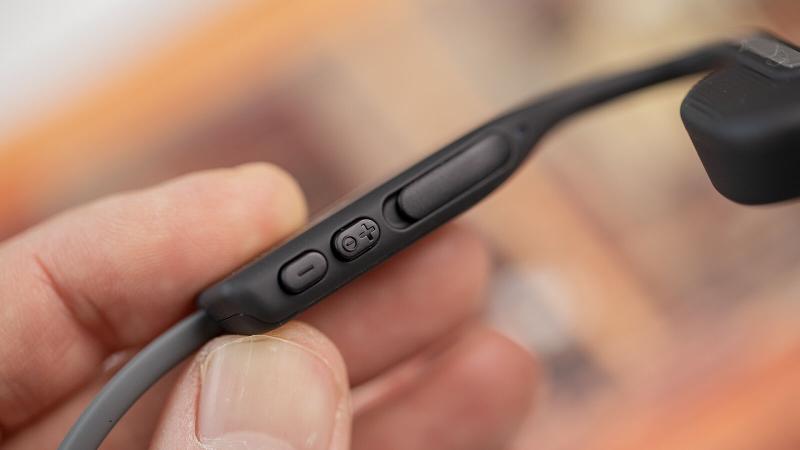 On the right, meanwhile, you’ll find the volume controls – two separate (and rather small) buttons rather than a single rocker. If you press and hold the volume+ button the headphones will power down. Next to the volume buttons you’ll find the USB-C charging port, hidden beneath a flap. 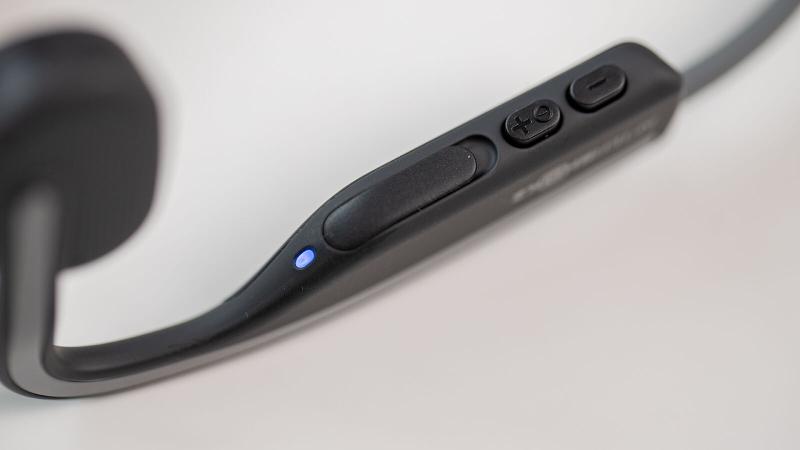 I found it counterintuitive that you have to use two different hands to trigger the various controls, and it’s also odd that the one on the left relies on a forefinger and the one on the right uses a thumb; those volume controls are also quite fiddly to reach, tucked away behind your ear.

Note that there’s no head detection, so taking off the headphones doesn’t pause the music. Not that you’d realistically expect a feature like that at this price.

The AfterShokz are pleasingly lightweight at just 29g, a few grams more than the excellent Powerbeats; you hardly know they’re there.

The fit is decent, too. The curve and material of the neckband causes the arms to naturally and gently push inwards and grip your head, ensuring a reliable fit and a close contact between the earpieces and your cheeks; it also means you can pop them around your neck when not in use and they will stay in place. 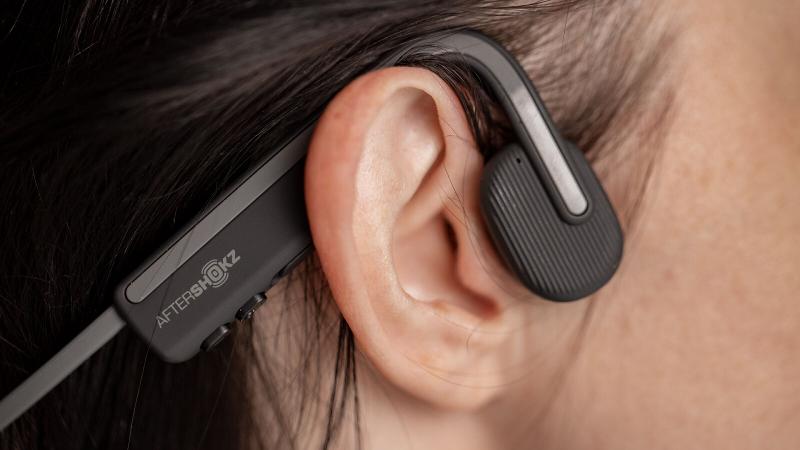 I tested the AfterShokz primarily while running, which can be a demanding environment for headphones, with plenty of head and body movement to cope with. But they never fell off, or felt like they were likely to.

This was mostly comfortable, although I started to feel very mild discomfort over the ears after prolonged wear.

Aside from being pushed inwards by the neckband, those arms are attracted to one another magnetically, and the headphones will stay in a ‘closed’ position if left idle.

The OpenMoves use bone conduction, and that is inevitably going to colour everything I say about the audio experience. Bone conduction will always struggle to match the sound quality of traditional in- or over-ear headphones, but it brings compensations.

The headphones don’t sit in or on your ears; they rest on your cheek just in front of the ear, and direct the sound through your cheekbones. In theory this bypasses the eardrum and communicates directly with the cochlea in the inner ear, which means those with hearing impairment may be able to get more from these than from more conventional headphones. It also means the ear canal is left completely open, which makes the wearer far more aware of their surroundings and therefore safer when out cycling, running at night etc – although many in-ear headphones, such as Apple’s AirPods Pro, feature transparency modes that deliberately pipe in ambient sound and provide a similarly safe experience.

Bone conduction has its advantages, then, but this mode of transmission means the sound is thin, and doesn’t compare at all with traditional audio. You don’t get any real substance from bass in particular, which feels like it’s happening entirely in your cheeks and inner ear – you don’t experience it viscerally as you do with the best conventional headphones and speakers. (I find that with decent in-ears the bass hits me further down – around the back of the neck or throat. With premium over-ears it’s almost down into the chest, and of course a substantial speaker will get you in the belly.) 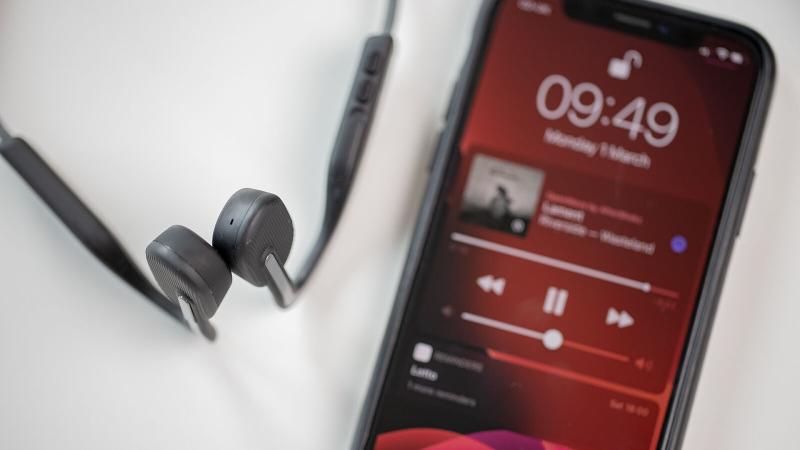 On less bass-reliant tracks such as pop and classical the lack of punch was less noticeable, but I was still conscious that it was a relatively thin sound without much substance or sense of space. Spoken word is probably the headphones’ strongest suit because it is the least reliant on a rich, bass-heavy delivery, but even when using the dedicated Vocal Booster Mode you’re missing that sense of being in the room with the speakers that over-ears in particular are so good at providing.

I also found that pushing up the volume in quest of a harder audio kick was uncomfortable in a slightly unsettling way: the vibration of the speaker units gave a very slight but noticeable buzzing sensation on my cheeks. Having sound conducted through your cheekbones is a peculiar idea that I didn’t like at first, and while I was mostly able to get past that in practice the strangeness returned at high volumes in a way that I found off-putting.

Finally, bear in mind that the open design, which is useful in some respects, means there is absolutely no passive noise isolation at all. If you want to be cut off from the sounds around you, and God knows we all do sometimes, these are not the headphones to buy.

The manufacturer claims a battery life of six hours’ use, or 10 days of standby.

The OpenMove actually did considerably better than that in testing, although (for an accurate recreation of my usual audio habits while running) I alternated between bass-heavy music and podcasts, a less demanding diet than all music, all the time. The headphones made it to 11 hours and 31 minutes before expiring, which is a decent showing by general industry standards and very impressive for such lightweight kit. 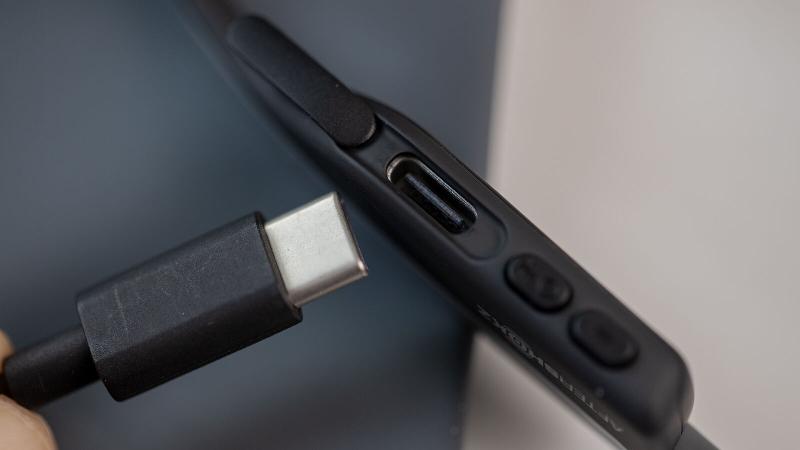 I have a quibble about battery performance, however.

During testing I tracked power levels using the Batteries widget on the associated iPhone, since the headphones themselves offer little detail on this front. But unlike the Apple devices I track in this way, the AfterShokz always reported a battery percentage that was rounded to the nearest 20% – and even beyond this the numbers really didn’t give an accurate assessment of how much juice was left.

Up to roughly six hours in – albeit with those less demanding podcasts predominating in early testing – they were still showing a scarcely credible 80%. This then switched abruptly to 60%, which lasted until around 10 hours. And in the remaining hour and a half, they dropped to 40%, then 20%, then turned themselves off.

Note that you don’t necessarily need to rely on your smartphone to get an update on battery levels: you can instead press the volume up button while music is paused to get a (somewhat indistinct) spoken status. But this is extremely – and to me, unnecessarily – vague, with only high, medium and low to choose from. Or, once you get below 20%, “charge me”. There’s also an indicator LED that flashes red when battery levels are low.

Overall, then, while the battery performance itself is good, the headphones do a poor job of informing the user how much longer they can be expected to run without a charge. 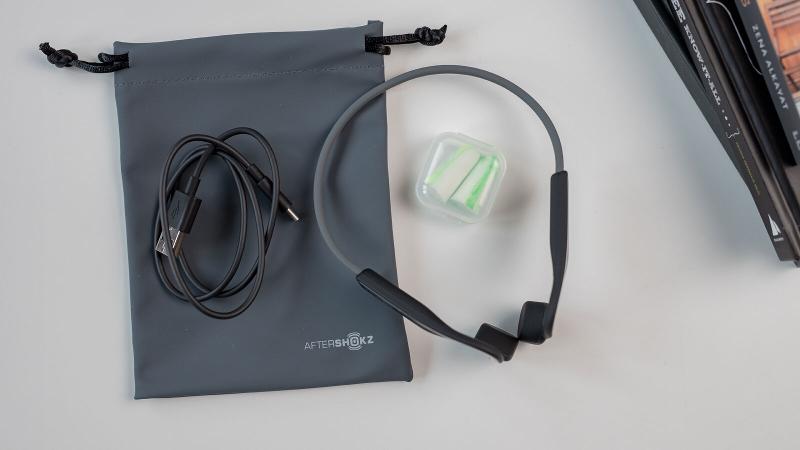 Bone conduction has its advantages, and the AfterShokz OpenMoves are a good choice for those with the specific hearing issues that will be aided by bypassing the eardrum (I would recommend speaking to a doctor) and for anyone who prioritises being able to hear background sounds while using headphones.

For the average user these may be less of a slam-dunk. Audio quality is thin at best: it’s okay for podcasts and other spoken word recordings, but anything that calls for a bass kick is going to disappoint, and even quite trebly classical had none of the richness you’d get with mid-market traditional in-ears.

The runners among you will appreciate the reliability of fit, and should find that the OpenMoves refuse to budge during even the most strenuous of exercise. But that usage category tends to go hand in hand with bass-heavy dance tracks, which won’t be rendered with the oomph required to motivate and enthuse.

A tough one to grade, overall, since my complaints about audio quality are rather par for the course when you plunge into the world of bone conduction. The price, fit and battery life are all pleasing, but it’s important to be aware before spending your money that headphones in this category are not going to provide the audiophile experience you can get with other types.