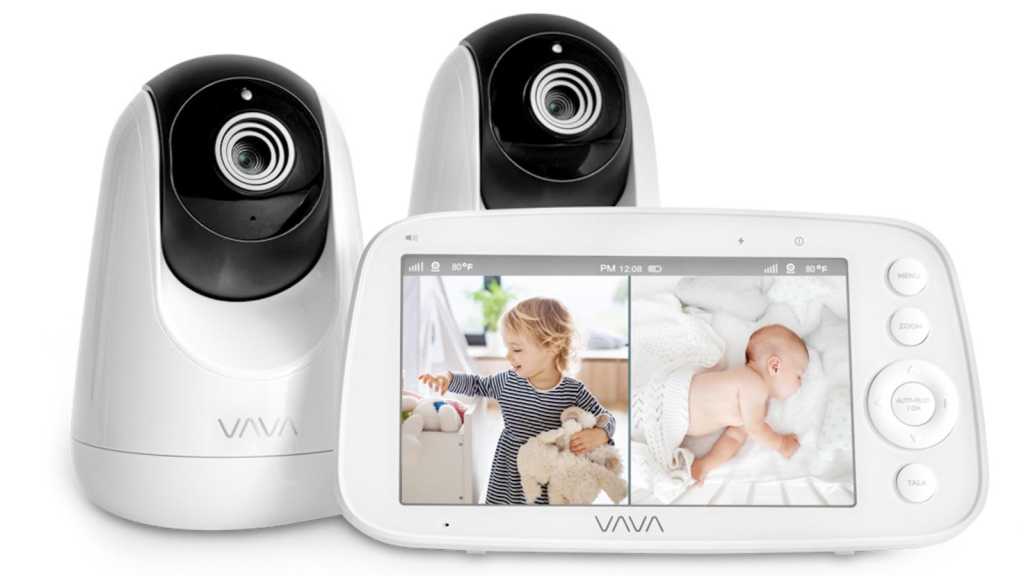 The Vava Split Screen Baby Monitor is a must-have if you have two children to keep an eye on. The ability to view two live feeds simultaneously saves time, stress, and fiddling about with buttons and menus.

The split screen VAVA monitor is neatly packaged. The quick start guide, user guide and warranty extension come in an envelope at the top of the box; the two cameras and the monitor nestle in padding underneath, with the plug and cables in a small cardboard box at the bottom.

Getting this monitor out of the box and figuring out what plugs in where is simple, as it should be – considering you may already be in the throes of chronic sleep deprivation when you unpack it.

The conical cameras feel sturdy. There’s a good weight to their bases, and each one stands on a rubberised ring, so they aren’t going to skate across a surface if you accidentally nudge them with your elbow.

That said, the cameras don’t come with a manipulable spider claw or snake that you can use to attach to an unconventional surface (although you can buy a compatible one for $19.99), such as a cot top rail, nor do they come with wall fittings included. However, each camera does have a mounting hole in the base and the manual shows you how to properly attach a camera to a wall.

Bear in mind that the cameras need to be plugged in at all times: they don’t have a chargeable battery. Each camera has white housing that clasps a black camera orb, an on/off power slider, and comes with a 192cm cable.

This length is great for a chest of drawers a foot or two to the side of a power socket, or the top of an infant’s wardrobe (around 137cm), and will even reach the top of an IKEA Kallax shelving unit (147cm high) as long as the plug socket is directly behind the unit. You’ll struggle to place it on the top of a conventional children’s wardrobe, as most of these come in at a height of about 180cm.

The monitor also has a reassuring weight to it. The fold-out back stand keeps the unit stable in spite of the long, foldaway antenna. There’s a power button on the top and a charge socket on the left side. The power cable is a 150cm long USB-C, so it’s workable in all manner of viewing situations.

Obviously, you need to charge the monitor before going cordless (VAVA says the total charge time is eight hours, and this seemed accurate to us), but you can set up the system as soon as you plug the monitor into a power socket.

The setup process really is the moment of truth for any baby monitor system: does everything connect quickly and easily?

I have to say I was impressed. I expected to fiddle with settings and menus to connect two cameras to the monitor, and possibly run through a pairing cycle for the second camera twice, but one camera comes factory paired to the monitor out of the box, and the other connected immediately. When I turned on the monitor, both feeds were there in an instantaneous split screen.

You get a 5″ HD720p display, and it gives you vibrant colours and excellent detail across a viewing angle of 1.5 metres vertically and 1.4 metres horizontally. You also have eight brightness levels, so you can adjust the picture to work with the atmospheric light in the room.

Furthermore, the pan-and-tilt capability has excellent range for tracking down errant tots. You can remotely adjust either camera 108 degrees vertically and 270 degrees horizontally from the monitor controls, so the only thing you can’t see is the 90 degrees directly behind the camera, the floor directly below and the ceiling directly above.

You can also purchase wide angle lenses for the monitors separately if you want a wider view of a room. These cost $6.99 from Amazon US.

The zoom feature is also pretty good. The camera magnifies 4x, although you do lose detail the closer you zoom in, but, as you can see from the images below (which show full screen, 2x zoom, 4x zoom and night vision), the image at 4x is just somewhat lossy – it’s not as though your infant becomes a pixelated blur.

The only flaw is that it’s tricky to initially figure out how to pan, tilt and zoom each individual camera. When the monitor initially connects and turns into a split screen of both live feeds, it’s not immediately obvious how you select each feed and then pan, tilt or zoom that particular camera.

This issue is compounded by the fact the menu structure on the screen is a bit confusing.

But it is a bit of a steep learning curve and took me about five minutes or more to figure out – not something you’ll be able to do if you have a child crying in your ear.

The monitor automatically turns to black-and-white night vision when it detects the light in the room dip, and, again, the images are excellent, although it is worth flagging up that when you zoom 4x in night vision, the resulting view can be a bit eerie.

The monitor also shows the temperature of each camera room (you can switch between Fahrenheit and Celsius through the settings menu), the current time (which you set yourself through the menu), which cameras are currently streaming to the monitor, the battery level, the signal strength, and the sound level.

VAVA also suggests you get 18 hours of battery life from a fully charged battery if the screen is off, and we found this to be reasonably accurate.

You have seven speaker volume levels, with 0 being mute. The highest volume level, I found, picked up voices from the living room downstairs, so the microphone in the cameras must be pretty sensitive. You can also change the global system volume settings through the menu.

When in split screen, the monitor switches sound from one camera to another every fifteen seconds, and the sound levels visually display at the top of the monitor through a series of dots: green for moderate and red for loud noises and crying.

There’s no lullaby mode with this monitor, so it won’t play melodies or atmospheric noises, but it’s debatable how much value those types of features add, particularly if the playable sound quality is not great. However, if that’s what you’re after, you might want to check out the Philips Avent DECT baby monitor.

You can set an alarm for two, four or six hours, or specify a precise time through the alarm menu option. The alarm itself is a series of five beeps that repeat in sequence; it isn’t offensive and doesn’t set your nerves jangling.

You can also change the automatic screen sleep time from one minute to two or five minutes, or turn it off entirely.

It’s important to note that you can’t take snapshots or record video with this system, but it’s worth considering whether you really need this feature, considering the sheer volume of image and video data you’re likely to accrue over the first few years of your child’s life.

Also, this system doesn’t track breathing, baby temperature, rollovers, or sleep trends in real time, nor room humidity, nor can you plug a smart sock into it. For that kind of facility, you might want to look at the Owlet Smart Sock baby monitor.

The VAVA Split Screen Baby Monitor is not Wi-Fi-enabled, so you can’t stream feeds to your smart phone.

What you get with the VAVA is a private connection between camera and monitor where signals are digitally transferred in the 2.4 GHz frequency with FHSS technology. This means your system is virtually impossible to hack and you don’t have to depend on your router for video feeds to the monitor.

VAVA says that the operational range of its system is up to 280m to 300 metres without obstacles. However, in our test, in a UK stone built, semi-detached house, we had a range of only 30 metres (98 feet) from the cameras to the monitor before the picture cut out.

So, that’s something to consider. If you live in or around properties that are older and built of more traditional materials (thick stone external walls and internal brick walls, rather than brick external walls and plasterboard partitions), it may inhibit range – but this will be a problem with many monitors.

That said, this monitor system retained a good picture at 30 metres before it cut out, and the sound was decent as well.

You can add an additional two cameras to this VAVA system (so four cameras in total), and also choose which cameras you wish to see in the split screen through the menu system. An additional VAVA camera currently costs $95.98 on Amazon US.

The VAVA split screen baby monitor costs $259.99 from VAVA. You can also buy it from Amazon US for $279.99 and it can be shipped to the UK. It’s also available from Amazon UK, although at the time of writing it’s out of stock.

A split screen baby monitor is a game changer, and extends the life of a system beyond the cot years. If you have twins, or two under-fives in separate rooms, or a pre-schooler with both bedroom and playroom access, a split screen monitor is a phenomenally good idea. It just lessens stress: you don’t have to faff about with changing camera feeds to your monitor in the middle of the night.

This VAVA system has a great display with good resolution. Okay, it doesn’t have the bells and whistles that other systems may, but the split screen more than makes up for the lack of whale noises.