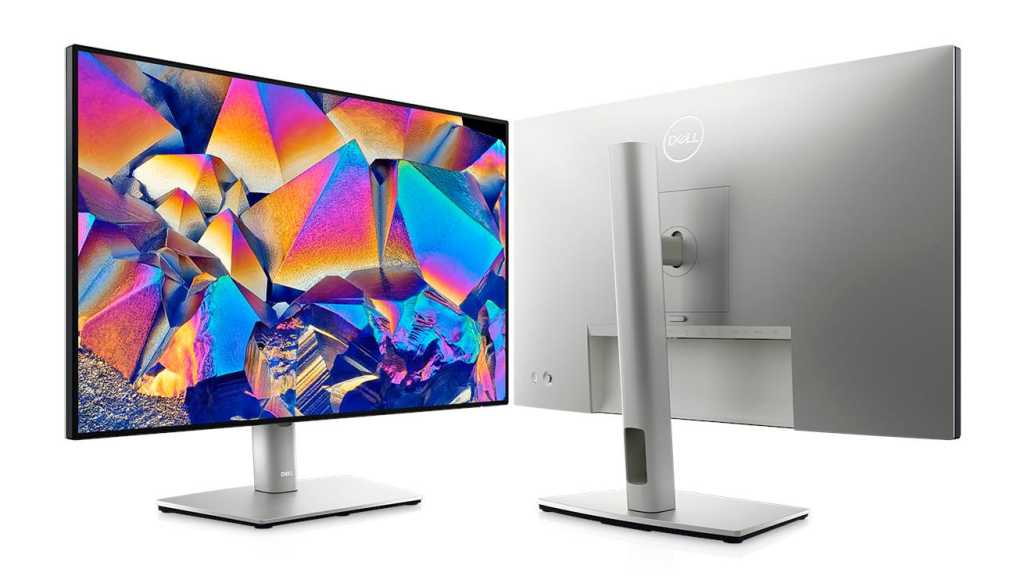 The Dell Ultrasharp U2421E is a slick design perfect for those with a USB-C charged laptop, as the docking station features are handy. The colour range is also good, but the price is too high for this resolution and size.

Due to an increase in home working and the limited space that entails, smaller monitor designs are making something of a resurgence. Where once bigger-is-better was once the mantra, now considerations like blue-light protection, power consumption and efficient use of space are given greater weight in monitor choices.

Dell, never one to ignore a developing opportunity, has produced the stylish Dell UltraSharp 24 (U2421E) to address this market. A USB-C Hub Monitor big enough for general office work and perfect for those who use a laptop as their daily workhorse.

Did Dell get the mix of functionality and performance right with the U2421E, or could it have been better?

Dell deserves a gold star for the packaging alone. The tray that holds the U2421E, its support arm and all the cables uses pressure-formed cardboard and not that horrible, expanded foam so beloved by many monitor makers.

Not only is this better for the environment, but this option doesn’t coat the display with excessive amounts of static electricity that then attract all the dust from the room within hours.

Along with the display, you get a two part-support arm that can be assembled and attached to the screen without tools and a good selection of cables.

Gone is the era where an included HDMI cable impressed us, but then that isn’t included. What is are a DisplayPort cable, a Type-A to Type-C USB and a dual-ended USB Type-C cable.

There were also two power cords in my box, one for the US and one for the UK. Dell is usually very attuned to local socket differences, so I would expect at least one power cord that fits the outlets in your home or office.

Getting the U2421E out of the box and assembled is remarkably easy, as the panel only weighs 4kg, and joining it to the support is a tool-free operation.

The support arm and base are both plastic covered but have metal internal parts making them sturdy enough to support the display. They also provide plenty of adjustment with 21 degrees of tilt backwards and 5 degrees forward, 40 degrees of swivel and 90 of pivot. The pivot, or twist if you prefer that word, is combined with 15cm of vertical travel that enables the U2421E to be used for portrait mode.

Other aspects of this design that I like include an internal PSU, avoiding the annoying proprietary power brick that is usually the first point of failure. Dell also resisted the urge to put a cover over the inputs, making cabling remarkably easy if you use the pivoting feature to improve access.

I’ve concluded that all monitors have the designer’s thinking embedded in them intrinsically. Presumably, as a start point, each is given an archetypal customer definition and the resulting product represents an answer to that problem.

The mystery is that we never get to see the brief and only guess what it included based on how the design ended up. At the heart of the question answered by the U2421E is laptop use, specifically those that use one for both mobile computing and in the office.

Therefore, an essential aspect of this design is its ‘hub’, which performs the same role as a USB-C docking station.

Connecting requires a USB 3.2 Gen 2 USB-C port, ideally the charging port on the machine. With increasingly powerful laptops coming to market, offering 60W or even 85W might not be enough.

This one line can deliver 90W of power, enabling it to power the machine in use and charge the battery simultaneously.

But this connection also provides for downstream USB connections to peripherals, like a mouse and keyboard, another USB-C device with 15W of charging (a phone), RJ45 wired networking and can also carry the display data.

Via this single cable, the laptop is not only able to recharge but connected to everything it needs quickly and effectively, avoiding the need for a docking station or more complex wiring solutions.

But you can also connect any computers that have the most common video outputs. HDMI and DisplayPort are standard requirements and therefore expected, but the inclusion of DisplayPort out is an odd option that we don’t often see these days.

Dell makes a dual Monitor arm, the MDA20, that two U2421E might nicely fit. A single DisplayPort output can be connected to one and then chained to the second monitor via the DisplayPort out.

As neat a solution as that might be, it only works if the price of two U2421E is less than an ultrawide display that only has a single connection, has no frames dividing the middle of the image and doesn’t require a dual monitor arm.

The market for this design evidently isn’t gamers, as this is an IPS technology panel that can only achieve 8ms refresh in normal mode or 5ms in ‘fast’ mode. But other limitations such as the maximum 60Hz refresh and the lack of variable sync underline that there was no intention to make this panel a multi-purpose solution.

What IPS displays are good at is viewing angles and colour gamut, and the U2421E ticks those boxes at least on the paper specifications.

Most flat monitors made these days have the same ratio of 16:9, but the U2421E has a ratio of 16:10 and a resolution of 1920 x 1200. That was a popular resolution in the early days of LCD panels, but I’ve not seen many supporting it recently.

The advantage of this resolution over more conventionally 1080p, is that it leaves additional vertical room for the taskbar without covering up any 1080p content being shown above it. The extra slice of screen real estate can be useful, although if you play a 1080p movie in full-screen mode it will end up being relegated to black bars at the top and bottom of the image.

To avoid predictable confusion, Dell placed an orange plastic plug in the DP-out port, so users wouldn’t insert a DisplayPort cable in there from the computer and then wonder why they got no picture.

There is also an irritating downside to this feature. Under the rules of HDCP, ‘repeaters’ are not allowed as you might be stealing that content away. As dumb as this might all seem in a streaming world, and it is, some HDCP compliant applications may refuse to play with this screen connected.

The on-screen menu is accessible with a button joystick on the back right of the panel that’s more intuitive than a line of buttons and faster to make changes. Basic pre-sets include Game, Movie and Standard, and you can adjust the colour temperature, aspect ratio, input colour format and numerous other features that relate to the USB hub.

Top marks here for ease of use and making things you might often change, like input source, quicker to access, but offering many adjustments deeper in the menu for those that need them.

One potential issue that I experienced is that this monitor appears as an audio device, and Windows will typically make it the default output when you connect it to the computer. That device is the audio jack for headphones, as it has no integrated speakers.

I mention this for those who might wonder what happened to sound after hooking the U2421E up to a system.

Dell very kindly includes a factory generated colour calibration report in the box, showing how the monitor performed before it was shipped.

My sample had three graphics that covered sRGB Delta E over the spectrum, Gray-Scale tracking of colour temperature and finally Gamma against brightness per cd/m2 (nits).

What is odd is that on Dell’s graph, the U2421E failed to reach the 350 nits quoted on the specifications. Not that makers don’t exaggerate about their products, but in my testing this design not only reached that level but exceeded it.

Peak brightness was 365 cd/m2, above the quoted 350cm/m2, and static contrast was 980:1, just a tiny bit short of the 1000:1 that Dell quotes. The uniformity of brightness is also good, with an average deviation of less than 4% from the centre, although for whatever reason, it is noticeably darker in the middle top.

However, when you push the brightness up from the 75% default setting on the OSD, you are asked if you are sure you want to do that. If operating above this level is an issue, why provide the option to select it?

More positively, the colour representation is good, but not at a level that would impress those considered to be colourists. The screen managed 99% of sRGB and 83% of P3, but only 76% of the AdobeRGB gamut. The spectrum weakness is almost exclusively on the green side, with the blue and red scope being first-rate.

For a business-orientated panel, these are solid numbers and could sway some to spend more on this design for the high quality of the representation.

These prices are more attractive than the RRPs but there’s tough competition out there for similar monitors.

It might be much cheaper now, but the U2421E still isn’t an inexpensive option. Find out what other options you have in our best monitor chart.

The U2421E has strengths but also a few weaknesses.

On the plus side, it looks professional, and the support arm allows it to pivot and tilt extensively. It’s also got decent colour representation with close to 100% sRGB coverage and 83% of the P3 colour space.

The USB-C features are also a successful enhancement as they could easily remove an expensive USB-C docking station from a system purchasing budget. However, I can’t accept the notion that it makes economic sense to buy two of these and chain them via DisplayPort, even if it is technically possible.

It is possible to source an Ultrawide screen for less than the combined cost of two of these, and that hints at the significant problem the U2421E fails to confront, cost. A short surfing session on many large online retailers will reveal several similar designs with a remarkably close specification, and most are generally less expensive.

While it doesn’t need to match or better the very cheapest alternatives, it needs to be closer to them than it currently is to make this a worthwhile investment.