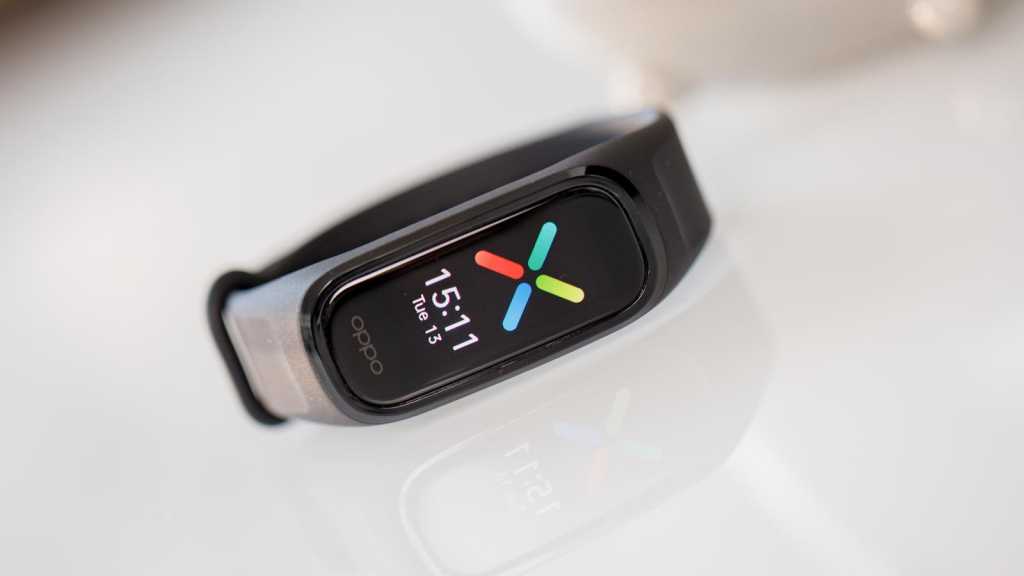 Oppo’s first activity tracker is very good, but it doesn’t beat the competition or offer anything new.

Oppo is still a relatively unknown brand in the UK, though its good-value phones are helping to change that. The Band is the company’s first wearable, alongside the Oppo Watch.

Both devices were launched almost a year ago in China, but are now available in the UK. Technically, the Band we have here is the ‘Sport’ model, as opposed to the Style which you’ll also find for sale on Amazon and other retailers. That’s not officially available from Oppo yet, but it’s essentially the same tracker with a more stylish band.

As you’d guess from the design, this is a fitness tracker that’s similar to a Fitbit and many other rivals, including the Xiaomi Mi Band 5, Honor Band 5 and Amazfit Band 5 (no, that’s not a copy & paste error – they all have the same name, such is the lack of imagination from these companies.)

Oppo’s wearable has a couple of highlights including SpO2 (or blood oxygen) monitoring, which the Mi Band 5 lacks, but the other two also have.

Given that Apple made this the headline feature of the Apple Watch 6, it’s quite surprising to find it on a fitness tracker that costs this little.

Available in any colour you like (as long as it’s black), the Oppo Band doesn’t do much to stand out from the crowd. It has a nice, bright 1.1in touchscreen, which can show the time, your steps, the date and other basic information. 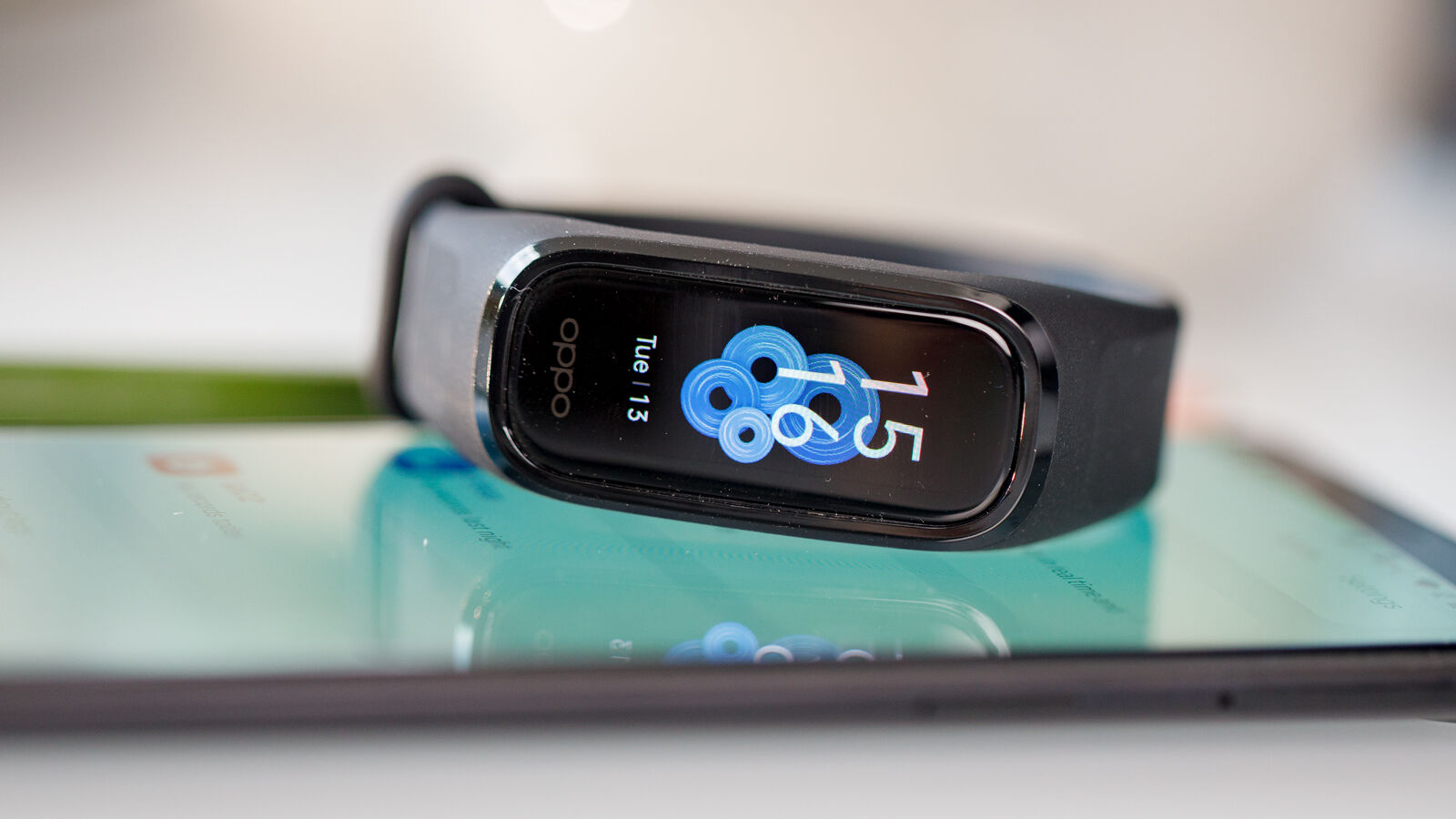 You swipe in different directions to navigate the menus and to change between five different clock faces. There are lots more – which you can pick in the HeyTap app for Android – but only five can be stored on the Band at any one time. (Note that the Band only works with Android, not iPhones.)

If there’s a niggle, it’s that – unlike the Mi Band 5 – you have no control over the information shown: you have to pick a face that has the data you want, such as heart rate (which isn’t a continuous readout, by the way) or your step count. There are none that I could find with the current temperature or forecast, for example. 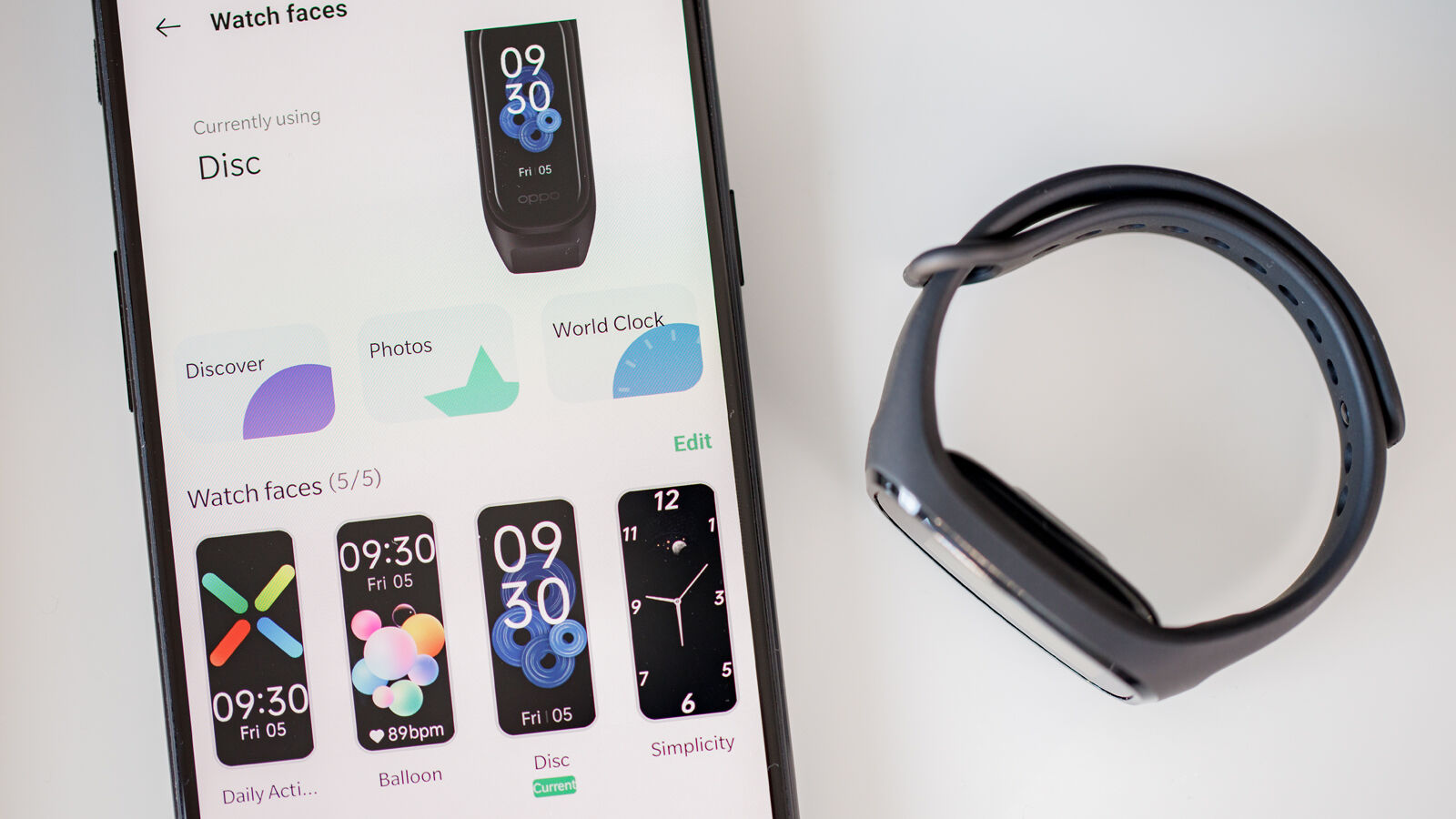 The rubbery strap should fit all but the very largest or smallest wrists, but it’s a bit frustrating that you have to remove the tracker from it for charging as the strap stops the proprietary charger from attaching. That doesn’t happen with the Mi Band 5.

Oppo says the 100mAh battery will last up to 12 days, but it could be less if you receive a lot of notifications on it or have the screen on a lot. I found the claim to be accurate, however. 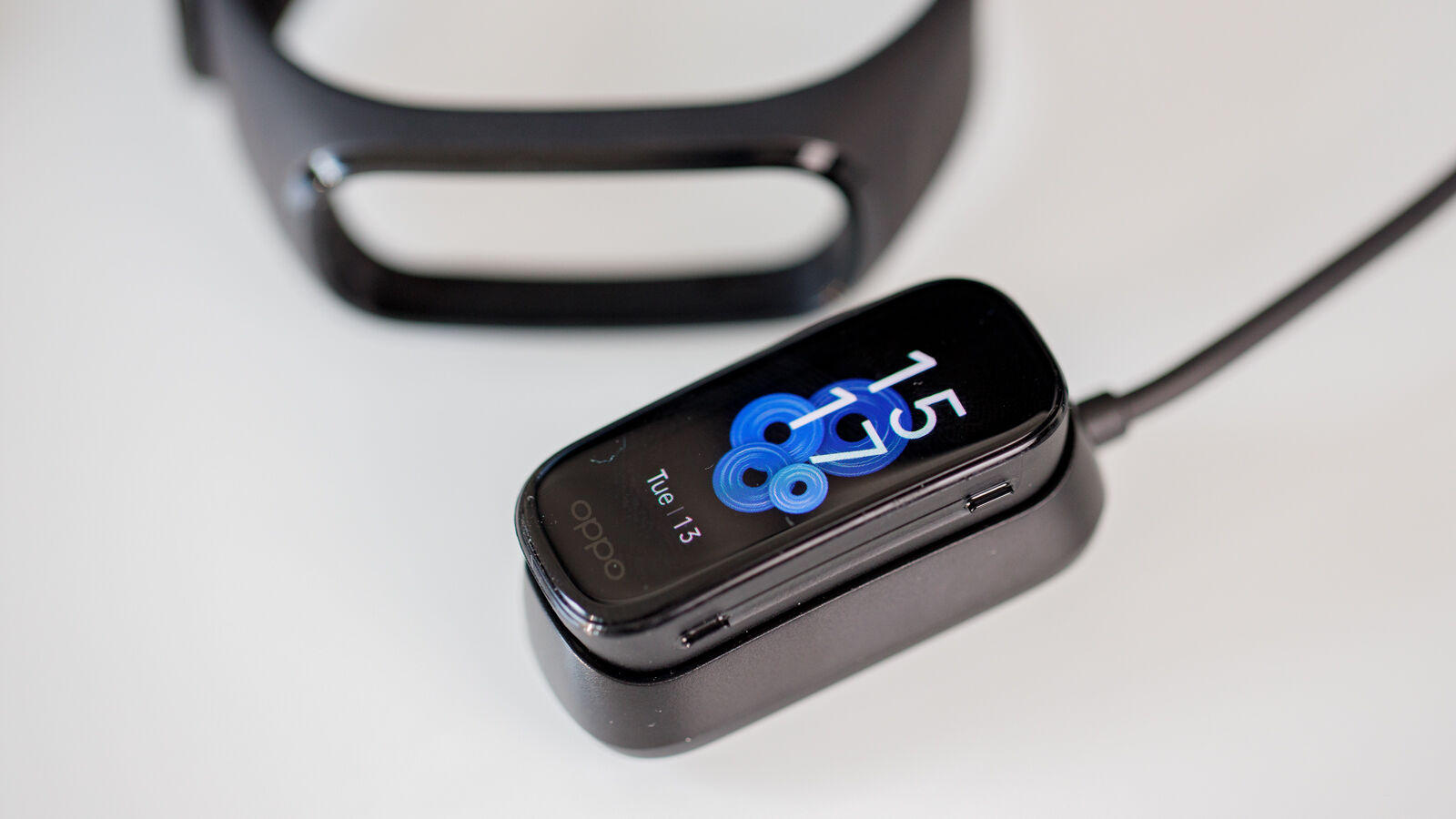 By default the screen only turns on when you tap it. You can change this by enabling the Raise to Wake option in the app so it lights up when you turn your wrist to look at it.

Just by wearing the Band, it will track your steps, calories burned and your sleep. But you can also get it to track specific workouts (there are 12 total), including running, cycling, walking, rowing, swimming, yoga, free training, and, unusually, cricket and badminton.

You have to start and stop these manually though, as there’s no automatic workout detection onboard. 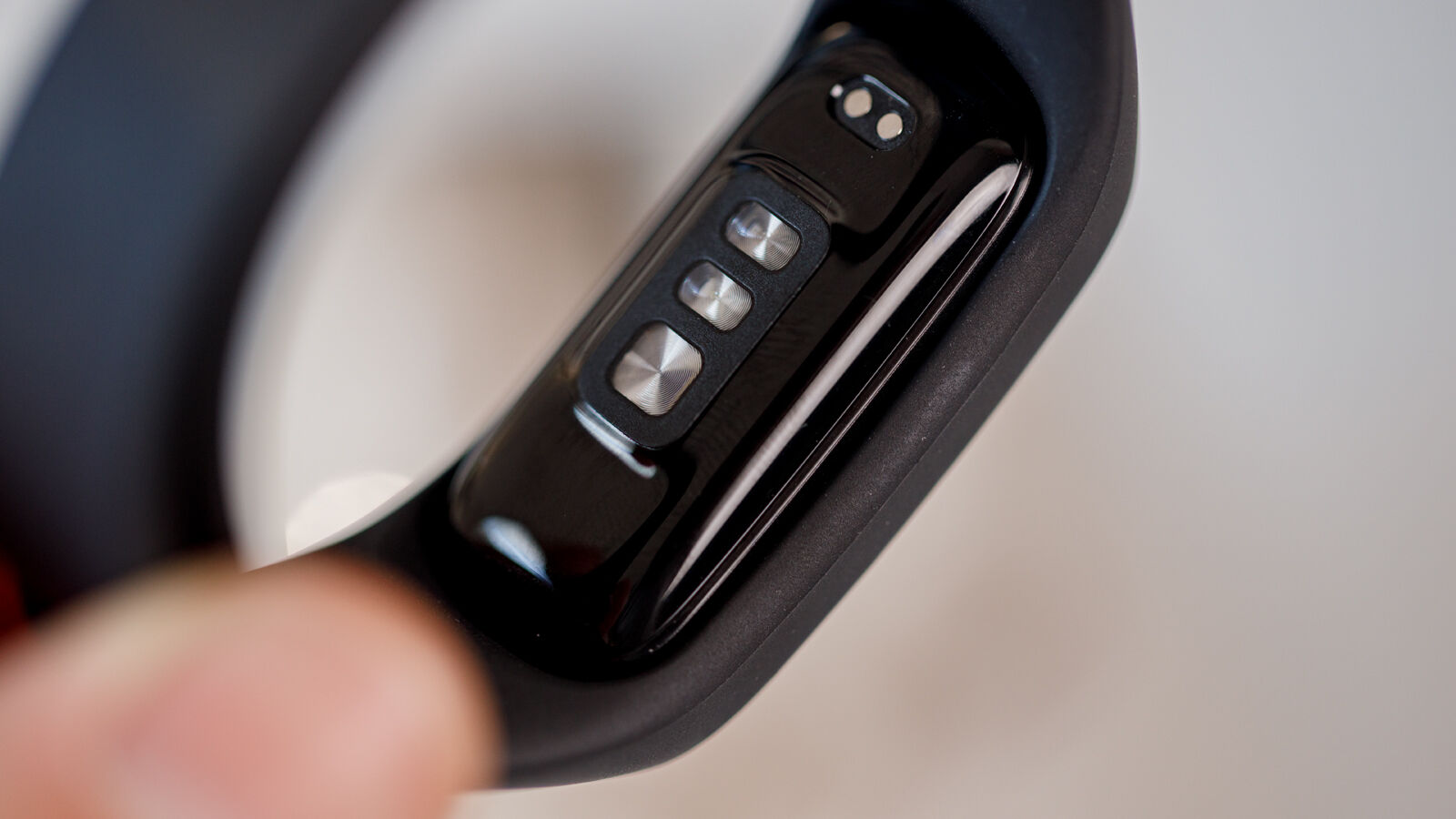 Using sensors on the back of the device, it can also measure your heart rate on demand and blood oxygen levels but will only do these continuously when you start a workout mode or when you’re sleeping (something which, usefully, is detected automatically; you don’t have to start and stop sleep tracking).

While working out – depending upon the exercise type you’ve chosen -you can check stats such as your distance, current intensity, pace and more.

Although the Band doesn’t have GPS, it uses an accelerometer to measure steps and can track your route if you carry your phone with you by using its GPS (i.e. connected GPS.)

Beyond fitness, the Band can do other things for you too, including waking you up in the morning, timing your pasta while it’s cooking, giving you a weather forecast for today and tomorrow, controlling music playback and more.

By default, the playback controls will appear on the Band whenever you use your phone’s music player (whichever app that happens to be.) 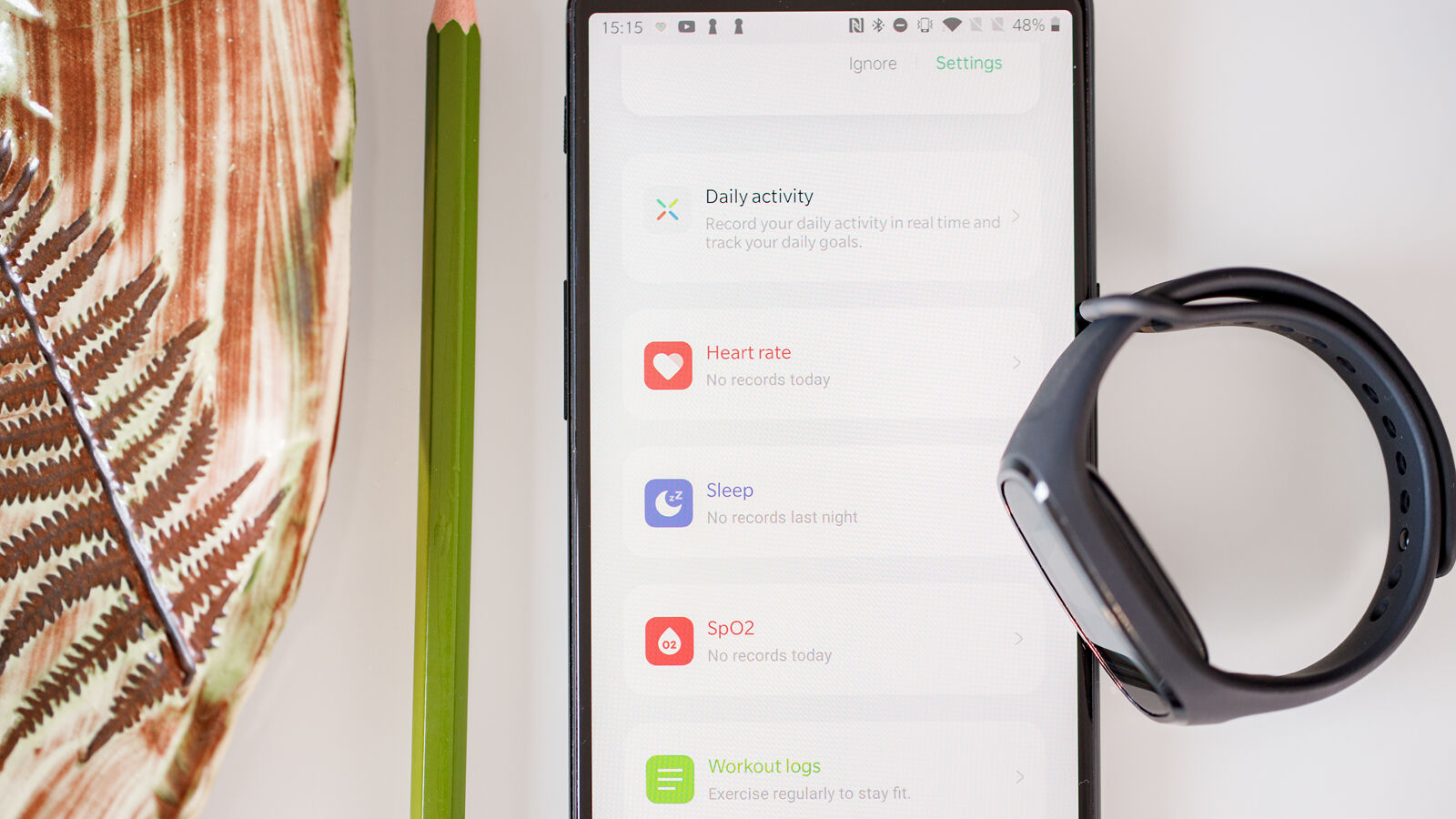 There’s also a tool to make your phone ring when you’ve misplaced it, but this could be better. For a start, it’s buried in the Tools menu, which takes five swipes and a tap to get to, then another tap to use the feature. It would be better if it was a shortcut displayed when you tap on the clock face. What you actually see when you do that is the battery percentage, step and calorie counts, and the date – you can’t even enable Do Not Disturb here, that’s awkwardly in the Settings menu.

Getting back to the Find function, it relies on your phone’s volume being turned up fairly high. If it’s quiet, you’re unlikely to hear the ringing, and it’s completely useless if your phone is set to silent. At least, that’s how it worked on the Huawei P30 Pro I used to test the Band.

Finally, there’s a Breathe app that works just like the Apple Watch’s; guiding you to inhale and exhale, and reporting your heart rate at the end.

There’s no way to use it to pay for things, which is a shame considering it works with Alipay in China.

Quite a few settings, such as choosing a time for the morning alarm, are only found in the HeyTap app: you can’t set them on the Band itself.

While you can see some data on the screen, such as how long you slept last night, you’ll need the app for more details. 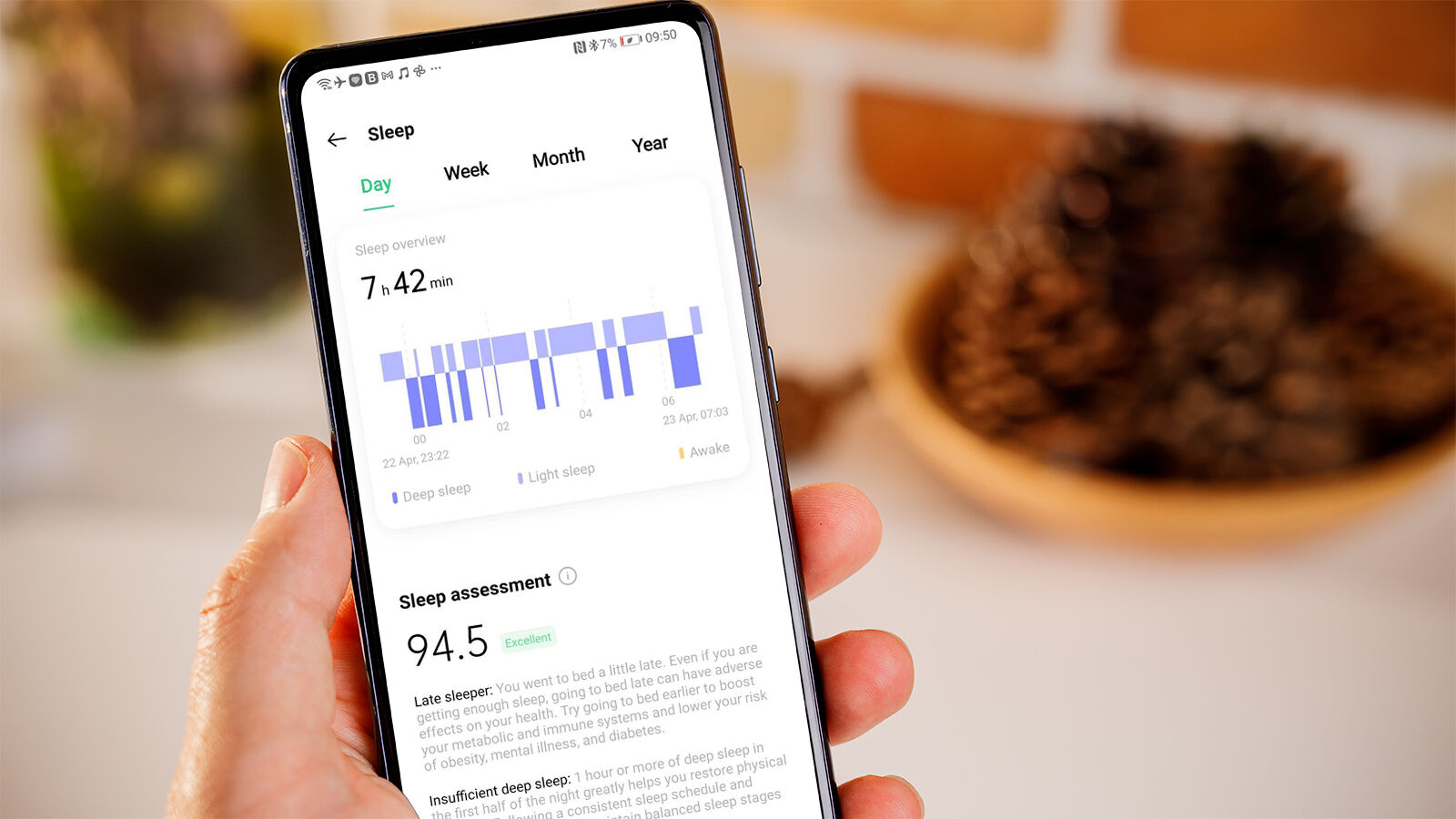 HeyTap has a clean interface but is relatively basic. It’ll give you an overview of your progress towards your step, calorie and workout goals for the day (using the ‘X’ graphic, which is also one of the Band’s faces), and you can also view historical data, by week, month and year.

In the Preferences, you can disable any of the main menu items you don’t want to have to scroll through on the Band, such as Breathe or Weather.

It’s in HeyTap where you choose whether or not to see notifications from each of the installed apps on your phone. You can’t reply to messages on the Band – or take phone calls – but you’ll know when someone’s calling you and you get a preview of messages.

Of course, getting notifications means you need to be in Bluetooth range of your phone, and thanks to Bluetooth 5.0, that range is pretty sizeable.

As well as enabling the raise-to-wake setting in the app, you’ll probably also want to turn on the Night mode, to stop the screen lighting up every time you move. That’s because screen brightness doesn’t adjust automatically: it’s either the brightness you set or it’s in Night mode.

As mentioned at the start, the Oppo Band costs £39.99 from Amazon. That’s a great price for a fitness tracker with a good OLED screen and the ability to monitor SpO2 levels.

But it’s £10 more expensive than the Mi Band 5, so unless you specifically want to monitor blood oxygen levels, Xiaomi’s tracker is the obvious choice. And even if you do want that feature, the Honor Band 5 costs £39.99 with support for this type of tracking, as does the Amazfit Band 5.

You’ll find other options in our roundup of the best fitness trackers.

Aside from the few foibles mentioned above, the Oppo Band is a perfectly decent fitness tracker. The problem is that its rivals have offered the same features (and in some cases a few more) for a long while now, and Oppo hasn’t done anything to elevate its Band above all the others.

Part of the issue could be that it’s not actually new: it’s been available from Chinese retailers since June 2020. The Oppo Watch – a smartwatch based on Google’s Wear OS – is arguably the better of the company’s two wearables, so it’s well worth taking a look at that instead, if you’re after a piece of Oppo tech on your wrist, specifically.