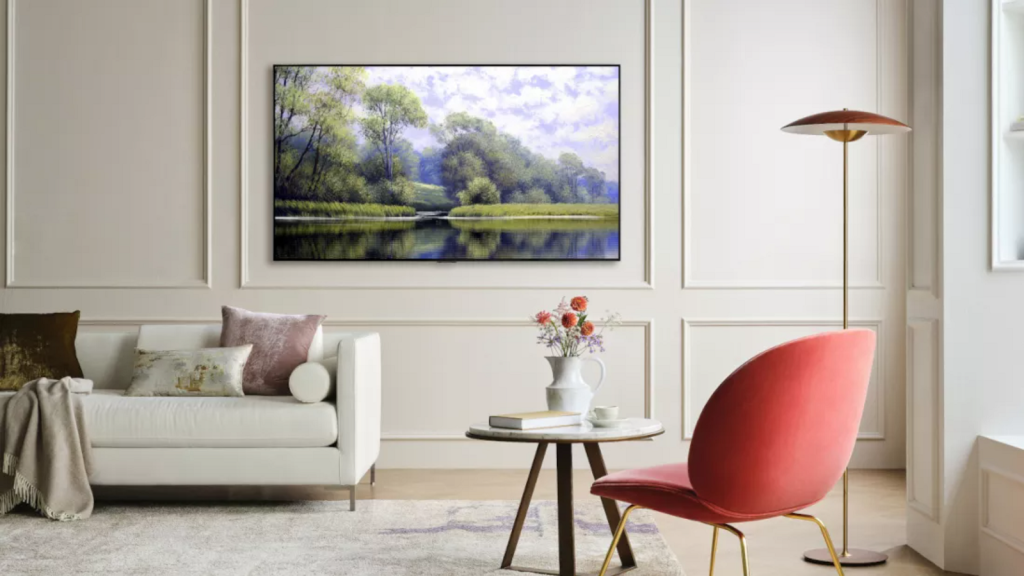 The LG G1 won’t be for everyone – it’s expensive and designed for wall-mounting, but the scintillating picture quality and an advanced feature set make this a screen we can all lust over.

Last year, LG’s OLED TV range was distinguished by spec and design. Picture performance was the same across the range, with the sole exception of the entry-level BX model.

This year, the G1 owns LG’s 4K performance high ground, thanks to a new Evo high brightness panel.
The catch is that the G1 is LG’s Gallery offering. This means it’s primarily intended for wall mounting and doesn’t even ship with feet. LG offers boots, or better still a cute retro tripod stand, but at additional cost.

The G1 is a follow-up from last year’s LG GX so the firm has swapped to a numbering system for 2021 and we are testing the 65in model here.

This isn’t a cookie-cutter OLED screen. Uniformly 2cm deep, the flush fit Gallery design is intended to be wall-mounted. As mentioned above, you’ll need to pay extra if you want to set it on some furniture or the floor.

And a lot more as the feet cost £99 and the official  Gallery Stand is a whopping £349 – the same price as many budget TVs.

The G1 is minimal in extremis, with an ultra-thin black bezel and little else to distinguish it. Build quality and finish is excellent.

The set ships with the latest version of LG’s Magic cursor remote control. It’s a slimmer, slicker pointer, but functionally the same as what we’ve seen before.

It comes with dedicated Netflix, Prime Video, Disney+ and Rakuten hot buttons, as well as Google Assistant and Alexa shortcuts.

Thankfully Freeview Play is back on-board this year, which means we get a return of all the main catch-up TV apps. The G1 also introduces a new look webOS platform, v6.0, which is well stocked with streaming treats.

The full-screen v6.0 look isn’t a million miles away from the new Google TV interface as introduced on the Chromecast with Google TV.

A Trending Now bar mixes live TV with Prime Video, Rakuten TV and Disney Plus recommendations, although Netflix suggestions are notable by their absence. Scroll down and you’ll see an app launcher, home to Netflix, BBC iPlayer, ITV Hub, All4, My5, Apple TV+, Now, Sky Store and YouTube, amongst others.

LG has ramped up gamer support for 2021. A new Game Optimizer interface, which unlocks when you connect a console, offers a genre selection, which adjusts processing based on game style.

Latency is above average. I measured image lag at an excellent 12.7ms (1080p/60fps), in the Game optimizer mode.

This LG is a visual wow. Its images are ridiculously lush and crisp. Time to heap praise on the Evo panel, and 4th-gen Alpha 9 image processor.

The Evo panel achieves higher brightness thanks to the introduction of a brand new blue material in the OLED stack, said to be more luminescent. There’s also a new green layer. Coupled with the upgraded image processor, the result is a brighter, sharper, punchier image.

LG has also improved its AI Picture Pro picture system, which analyses images and identifies content style in real-time. It can pull more detail from brickwork, find extra detail in trees and foliage and add a supple believability to skin tones.

Auto Genre selection, trained by deep learning, even allows the set to tell the difference between movies, news, animation and sports, and tweak accordingly.

From the box, the default image mode is Eco, which we would suggest immediately swapping to Standard. Other options include Sports, Cinema, Filmmaker Mode, ISF Expert bright/Dark and Vivid.

Watch Dolby Vision content from Netflix, and you’ll add Cinema, and Cinema Home options to the mix. Standard and Cinema Home became my go-to modes for most content, as they gave the most consistently rewarding pictures.

So just how good a performer is the new Evo panel when it comes to HDR? In short: very. I measured HDR peak highlights just shy of 800 nits using the Standard image present, and just over that with the Vivid preset.

For more HDR content mastered with a standard 1000 nit ceiling this means little or no tone mapping will be required.

Sonically, the G1 is a little more prosaic. For an ‘invisible’ sound system, the G1 makes a solid noise. Overall power output is rated at 60W. There’s a Dolby Atmos decoder onboard, as well as offering Atmos pass-through over eARC.

When it comes to Atmos playback there’s stereo panning, but spatially nothing beyond that, which is as I’d expect from a downward-firing speaker array.

If you want a TV with a superior sound system, look to the Philips OLED+935 with its Bower & Wilkins collaboration.

Here are the prices of all three G1 sizes:

You can buy the G1 directly from the LG store or from retailers such as Currys PC World and John Lewis – in certain sizes anyway. Sevenoaks and Hughes both have the 55in model.

Note that in the UK the models have ‘LA’ at the end of the model number while ‘PUA’ is used in the US.

The G1 is supported in LG’s OLED product hierarchy by the C1 model, which adds a 48in panel to the line-up, but lacks the G1’s panel innovation.

Check out our chart of the best TVs to see what your options are.

The LG G1 is a stunning 4K screen, the sort that stops you dead in your tracks. As befits its flagship position in LG’s OLED 2021 line-up, it boasts leading edge picture processing, best in class connectivity and a next-generation high-brightness Evo panel.

The new webOS and streamlined menu is a big success and a sensible reunion with Freeview Play makes the G1 more usable than its 2020 predecessor.

The caveat is that the form factor isn’t mainstream having been designed primarily to go on the wall. With no pedestal supplied, this is as much an interior design solution as it is a high-end display.

If the G1 suits, then go for it. It’s absolutely gorgeous. For the rest of us, look to use it as a benchmark for the rest of LG’s 2021 OLED models. We can’t wait to see how close they come.