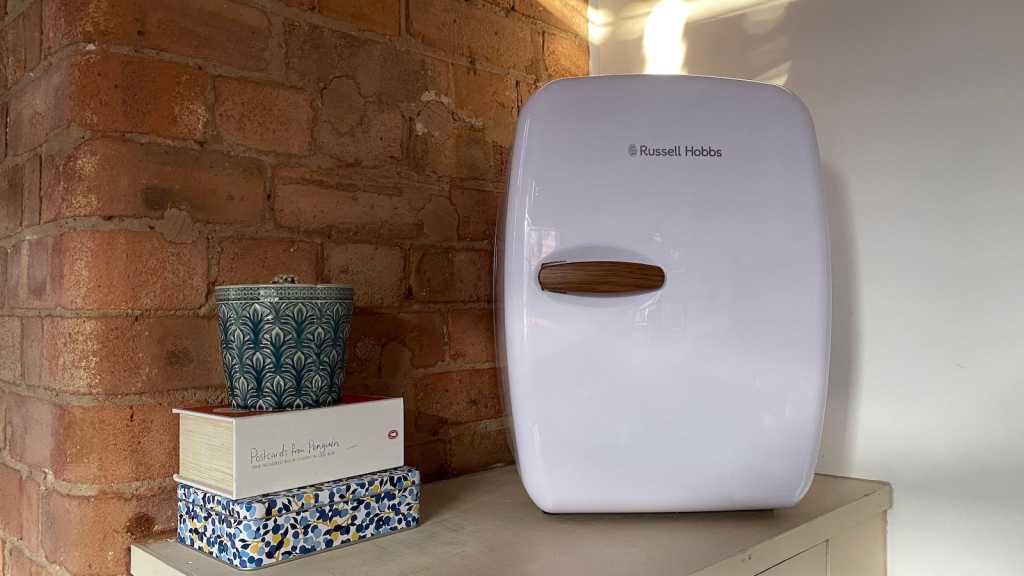 This spacious, portable mini cooler would make a handy addition to a home office or student bedroom. Still, we’re less impressed with its warming function: it doesn’t heat up food. It just keeps prepared food warm – and isn’t an energy efficient way of doing so.

Russell Hobbs’ mains-powered mini coolers are a lighter and more portable alternative to a mini-fridge. They also double as mini warmers.

The mini coolers come in two sizes: 4 litres and 14 litres. The 4 litre size will hold six 330ml drinks cans. The 14 litre model, which we’re testing, can hold up to 14 cans.

Inside the larger cooler, there’s a removable shelf. Take it out and you can store full-size bottles of wine or water.

The coolers come in two designs: Retro and Scandi. They’re functionally the same, both shiny, with an identical, curved shape. They differ only in terms of their colourway. The Retro fridges come in black or white, the Scandi models in black or grey, with wood-effect door- and carry handle. 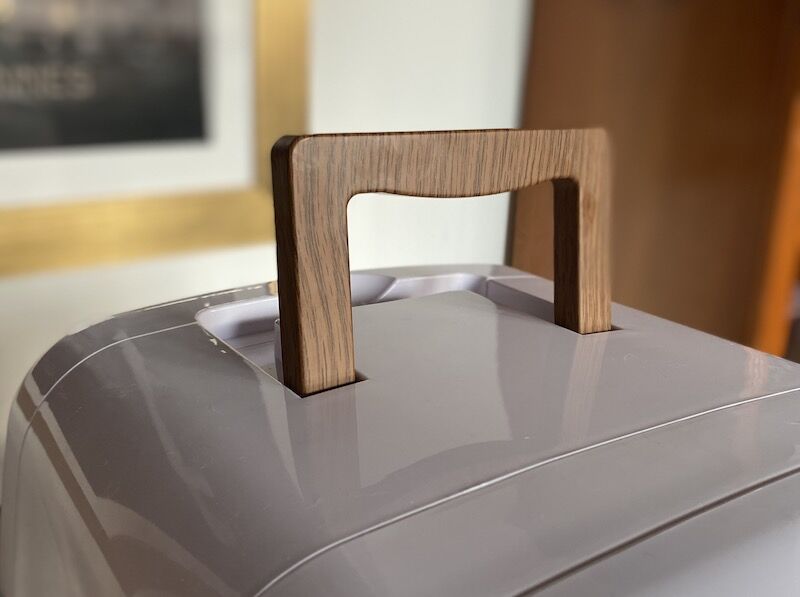 Design-wise, they’re cute rather than sophisticated and would fit in with a funky home office, student room or bedroom. As they come with an in car 12V DC adaptor, you can also use them on camping trips and picnics.

I’m testing the 14l Scandi cooler in white. It measures 42.2 x 32.3 x 32.4cm. The wood effect is moderately successful, especially when observed from a distance. I found that after using it for a while, the door handle stuck a bit on opening. Because the appliance isn’t particularly heavy, I had to hold onto its top so I didn’t drag it off the shelf when opening it.

When you plug it in, the plug protrudes from the back, which is a bit of a reminder that you’ll need to leave a 10cm space around the appliance for airflow.

When it’s first switched on and set to cool mode, the appliance goes into what the instructions call, in deafening capitals, MAX COLD mode. What this will mean to you is that it’s pretty noisy at the start.

Once it gets going, it quietens down – although it’s still audible, sounding a lot like an unending sigh. And each time you open the cooler’s door, the noise level ramps up again for a while. 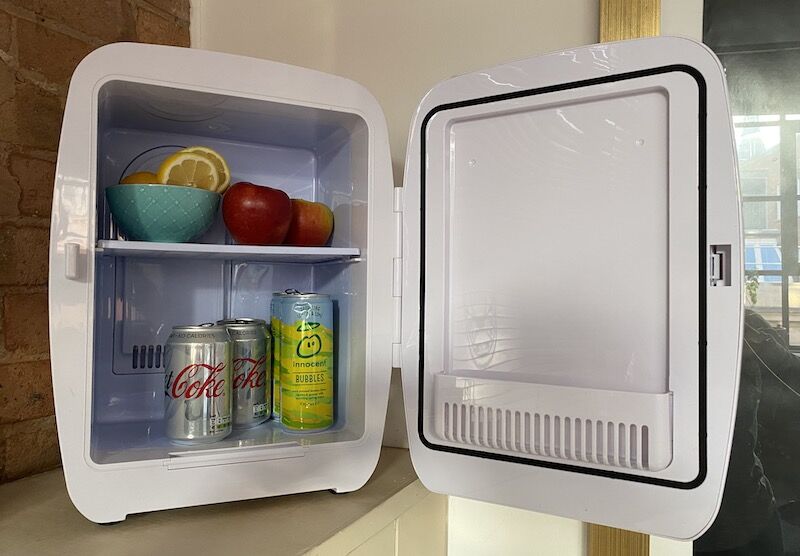 Although I said the cooler would be handy in a bedroom, it might disrupt your sleep, depending on your tolerance for white noise. If you use a white noise generator, however, you could just kill two birds with one stone: put this by your bed instead and wake up every morning to a cold beverage or, if you’re the Patrick Bateman type, a cooling eye mask.

In fact, Russell Hobbs does suggest you could use the coolers to store cosmetics. #Beautyfridges are indeed a thing, as Instagram will attest.

The jury is still out as to whether you actually need to do this (the jury seems to be leaning quite heavily towards a no), but still, many people swear by storing bottles of nail varnish in the fridge. And as long as no-one mistakes them for booze miniatures, have at it.

So, if you’re looking for a beauty fridge, the 4l version is very much beauty fridge standard size and at £44.95 for the Retro style and £49.99 for the Scandi, it’s competitively priced. As they only come in black, white or grey, however, they might not be as Insta-friendly as some of the pastel-coloured dedicated beauty fridges.

The cooler is capable of cooling to 16-20°C below the room’s ambient temperature. The lowest temperature it can achieve is around 5°C. This makes it fractionally warmer than a fridge.

What this means is that, in a room within a normal temperature range, it’ll keep your canned drinks perfectly cold. While we wouldn’t recommend storing meat or other similarly perishable food in one, the Russell Hobbs cooler will also be fine to store your snacks like chocolate and fruit.

However, the cooler isn’t just a cooler. It’s also a warmer, and this is where things get weird. We’ve noticed a few multifunctional appliances recently, most notably Haier’s InstaSwitch, which can be a fridge or a freezer, depending on your mood (or more reasonably, what food you have to store).

But a cooler that’s also a warmer? I’m not convinced.

I removed all of the nice cold drinks I had stored in my test appliance and flicked the switch on the back from cold to hot.

The waiting game began. When you choose a setting (either Hot or Cold), you must then leave the appliance for four hours to reach the correct temperature before you start storing food inside it.

The noise ramped up and so did my anxiety as the air around the appliance began to grow warm. Incidentally, in its warming mode, it is noticeably louder. So, using it for warm midnight snacks may not be ideal.

When it had heated sufficiently, I opened it. I can’t tell you how disturbing it is to open a fridge door and be greeted with a burst of hot air. Your senses tell you that the appliance is malfunctioning.

The bacterial ‘danger zone’ is between 8°C and 60°C. If food is kept colder than this, bacterial growth is slowed or stopped. Warmer and they’ll die off. The Russell Hobbs cooler will heat up to 65°C above the room’s ambient temperature, which should put it in the safe zone and avoid the heat-lamp nightmare of food poisoning.

Nonetheless, there’s no temperature gauge and no way to adjust the temperature.

I’m also not really sure what you’d use the heating feature for. It’s not hot enough to cook anything and it takes a significant amount of time to reach its upper temperature.

On its website, Russell Hobbs shows the appliance heaped with pasties, but surely it would be easier to heat these in the oven?

If you were camping, would you really have your car engine running for an hour so you could heat up pasties? Are you going to serve warm pasties to guests from a small fridge in your living room?

Anyway, I tried it out and while it does keep your food warm, it’s not steaming, piping hot. It’s just warm. Yes, you could use it to stop your coffee and toast going cold before you had a chance to eat it (although you’d have to decant your toast onto a saucer, as a side plate won’t fit in) but that just seems like a monumental waste of electricity.

The coolers are available from a number of retailers, including Amazon and the Russell Hobbs website, which have the best price.

The 14l Scandi-style coolers are available in white and grey for £89.99. The same size Retro style coolers cost £84.99 and come in black and white.

The smaller, 4l coolers come in the same styles and colours. The Scandi models cost £49.99 and come in white and grey, while the Retro coolers are black or white and cost £44.99. This pricing is in line with cosmetics fridges.

If you’re looking for a portable and versatile alternative to a mini-fridge, Russell Hobbs’ cooler is a good option. It won’t get as cold as a fridge, so it’s definitely for drinks and snacks only. But it’s light, easy to move around and use.

The warming functionality, however, seems like a strange add-on and I couldn’t find a use for it during testing. Ultimately, I was reminded of the line from Jurassic Park: “Your scientists were so preoccupied with whether or not they could, they didn’t stop to think if they should.”

For a drinks fridge option on the other end of the spectrum, check out our review of Haier’s luxurious Wine Bank 50 Series 7.