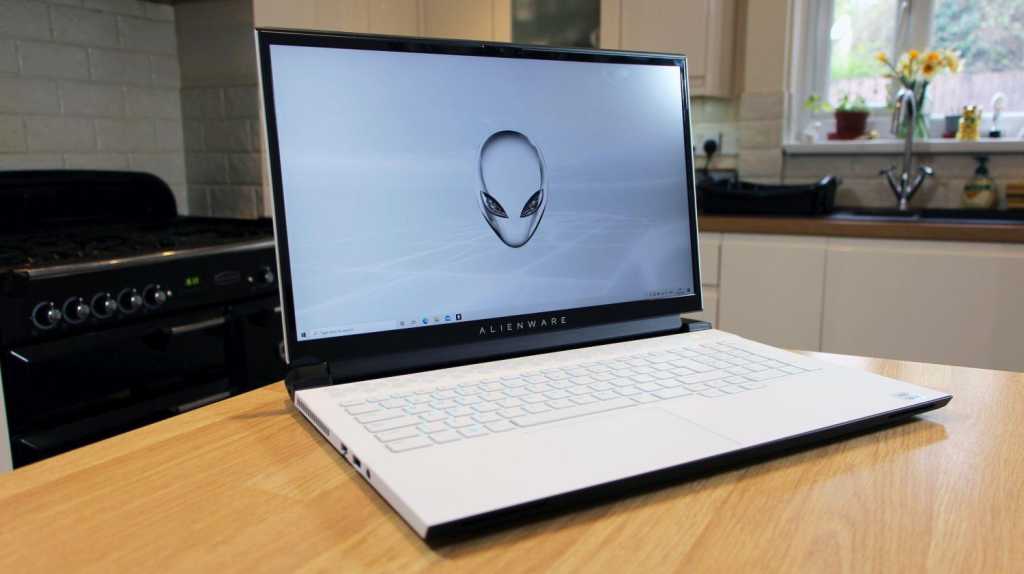 The Alienware m17 R4 is lightning quick, with solid design, a great screen and an impressive keyboard. It falls victim to the usual gaming laptop flaws of heavy design and poor battery life, but this expensive beast is a top-quality, high-end option for those that don’t need portability.

This is the fourth Alienware m17, hence the R4 model name, and at first glance, not much has changed. This gaming laptop still has the same stunning exterior as last year’s model and it still has a sky-high price.

If you’re going to shell out £3,499 or $2,999, though, the lack of design change isn’t a big issue. Instead, this m17 R4 justifies the cost with upgraded internals, including Nvidia’s latest silicon and a stunning 360Hz display.

The Lunar Light colour scheme I’ve tested combines a white base and lid with black accents, and the Alienware still has an ample assortment of RGB LEDs and eye-catching honeycomb venting. You can also get it in Dark Side of the Moon (black).

In terms of aesthetics, there are very few complaints: the bezels could be slimmer and there’s a little too much movement in the keyboard and the underside, but it’s still one of the sturdiest and best-looking gaming laptops around.

Alienware’s machine weighs 2.97kg and remains 22mm thick, so it’s heavier and thicker than its rivals. The latest Razer Blade Pro 17 and the 15.6in, dual-screen Asus ROG Zephyrus Duo are both slimmer and lighter. These are slim margins, though, and they won’t much difference in daily life.

There’s only a minor change in the port selection: an upgrade to HDMI 2.1. This updated port can handle 8K output, so you’re future-proofed if you buy a high-resolution TV in the next few years.

Elsewhere, the Alienware retains its trio of USB 3.2 Gen 1 ports alongside a Thunderbolt/USB-C port, a mini-DisplayPort output and a microSD slot. It’s a shame that faster USB 3.2 Gen 2 or Gen 2×2 are absent. On the inside, the Alienware upgrades to 2.5Gbps Ethernet, and it has dual-band WiFi 6.

The m14 R4 falls behind Razer in terms of connectivity, with the Blade offering more USB ports and a full-size SD reader.

The Alienware m17 R4’s standard keyboard remains impressive, with macro keys, a number pad, large buttons and a generous 1.7mm of travel alongside n-key rollover. The buttons are fast and consistent, with a solid base and it’s the best chiclet keyboard for gaming.

As before, UK users have per-key RGB LED backlighting, while US buyers get four-zone lighting – the per-key lighting costs $30 extra.

The mechanical hardware costs £100 in the UK and $150 in the US, but that’ll be worth paying if you find chiclet keys light and unsatisfying.

The trackpad remains reasonable, with fast, shallow buttons, but the pad could be larger. That said, most gamers will use a USB gaming mouse with this laptop.

The Alienware m17 R4 is better than both aforementioned rivals when it comes to keyboard quality: the Razer has a shallow keyboard with no numberpad, while the dual-screen Asus is cramped.

Last year’s Alienware m17 R3 had a 300Hz display, but this year’s model has Nvidia G-Sync and a 360Hz refresh rate. It’s 17in as the name suggests.

When combined with the Full HD 1080p resolution, it’s a top-level display for single-player gaming and eSports: buttery smooth in every game, and with enough speed to sate the most demanding competitive players.

The real-world gap between last year’s panel and this year’s model is tiny, but competitive players need maximum speed, and this also helps keep the Alienware in line with rivals.

Quality levels remain virtually unchanged from last year. The Delta E of 1.28 and colour temperature of 6,445K are both fantastic and ensure accurate colours, the 320 nit brightness level is good enough for any indoor situation and the black point of 0.23 nits is great.

The contrast ratio of 1,391:1 is marginally better than last year, and it delivers well-balanced vibrancy and depth.

The m17 R4 has impressive uniformity, and it renders 97.8% of the sRGB colour gamut, but it only rendered 69- and 72% of the Adobe RGB and DCI-P3 gamuts, so it’s not suitable for those colour spaces.

The speakers remain the same – tinny with poor bass. They’re fine for casual gaming and media use, but gaming headsets are better, of course.

Alienware’s updated gaming machine uses the Nvidia GeForce RTX 3080 laptop GPU, with its 6,144 cores and 16GB of memory, and this isn’t a variant with reduced power consumption – this is the proper chip, with peak power of 165W.

The Intel Core i9-10980HK has eight cores and a theoretical peak speed of 5.3GHz, and the m17 R4 deploys 32GB of memory and a 1TB RAID array made from two SSDs.

In Far Cry New Dawn and Wolfenstein: Youngblood with both games at Ultra the Alienware delivered framerates of 96fps and 184fps, with both results comfortably ahead of the RTX 2070 Super inside the 2020 R3 model. Turning off Ray-Tracing and DLSS in Wolfenstein saw framerates ascend to nearly 300fps, which is spectacular.

There isn’t much that this laptop can’t do. It’ll play anything on the 1080p display, including tough single-player games and top eSports titles at 300fps and beyond. It’ll output to 1440p panels, VR headsets, widescreens and 4K displays. This is the fastest gaming laptop around and the only way to get more graphics power is to use a desktop instead.

The Intel processor will handle tough content-creation tasks, too, and its Geekbench 5 and PC Mark 10 scores of 7,780 and 6,235 are excellent. They’re joined by SSD read and write speeds of 3,272MB/s and 2,348MB/s, which keep the laptop responsive.

Happily, the Alienware Command Centre has a couple of overclocked modes that deliver modest but noticeable performance gains in benchmarks.

The Core i9 CPU is undoubtedly powerful, but Alienware will soon be selling its m15 with AMD processors. AMD’s laptop CPUs are better than Intel’s equivalents in most workloads – the AMD Ryzen 9 5900HX in the Asus ROG Zephyrus Duo scores around 9,000 points in Geekbench so look out for those if this is important to you.

Alienware does a decent job of cooling the powerful internals. Even during the toughest gaming and productivity stress tests, the noise levels are no worse than any other high-end laptops – so they’re not terrible, but you’ll still want a headset.

Elsewhere, internal temperatures are fine, but the CPU still throttles in tough situations, some panels become warm and the right-hand side still vents hot air towards most people’s mouse hand.

And, as ever, don’t expect great battery life from this machine: it lasted just over an hour in a gaming benchmark and one hour and forty-one minutes in a work test.

You can also get the RTX 3080 with a Core i7 CPU and the 144Hz display for £2,899 or $2,599. As usual, screen, storage and memory customisations are available alongside warranty extensions.

There are also plenty of alternative options in our best laptop chart.

The Alienware m17 R4 is a formidable and improved high-end machine for those looking for a larger gaming laptop.

The RTX 3080 is the fastest laptop GPU available and is great for single-player gaming and eSports. The Core i9 processor is fast, the 360Hz screen is tremendous, the chassis looks great, and the keyboard is impressive. There’s even a Cherry MX mechanical option.

The issues are not surprising or ruinous. Battery life is poor and the Alienware is thicker and heavier than rivals, but this machine will stay rooted to a desk. The trackpad and speakers are mediocre, but most gamers will use a mouse and a headset.

It’s loud and hot, but thermally it’s no worse than other high-end machines. As ever, this machine is expensive, but plenty of customisation is available.

The latest Alienware is impressive, with huge power and superb design. It’s one of the best options available when it comes to high-end gaming laptops, and we’d only recommend looking elsewhere if you need more CPU power or it’s too expensive.