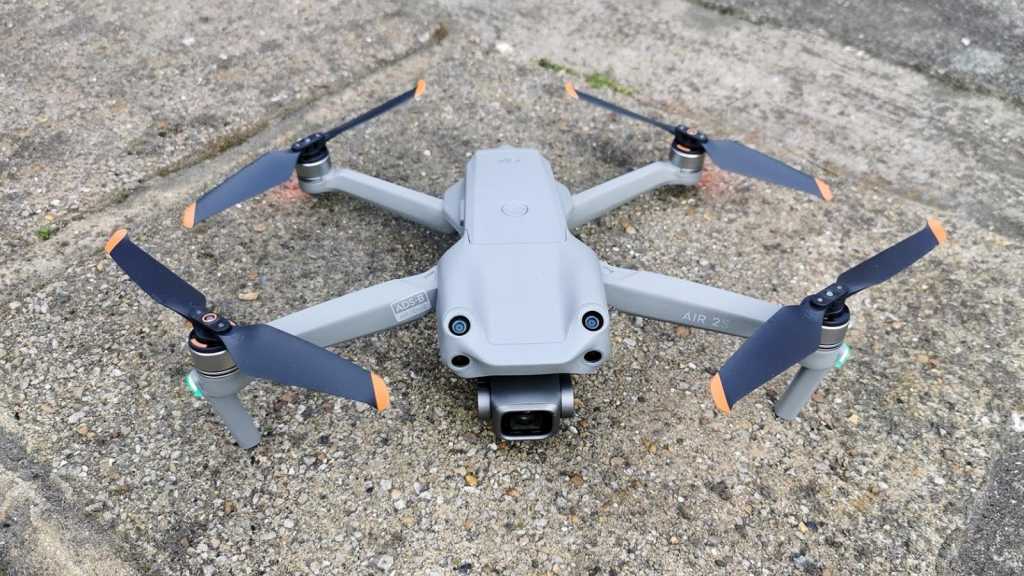 If the Air 2S was the same price as the Mavic Air 2, the newcomer would be a no-brainer purchase. The 2S is a fantastic drone, but only spend the extra if you’ll really use its new capabilities.

The original Mavic Air was a fantastic drone. It wasn’t perfect, but struck a brilliant balance between portability, price and capabilities.

With the Mavic Air 2 representing a decent upgrade in 2020, it’s a slight surprise (especially considering how much  coronavirus has disrupted work and supply chains) that DJI has been able to launch the Air 2S in spring 2021.

It isn’t the Air 3, but don’t let the ‘S’ fool you: this is a proper update with some significant changes. Sure, it may look very similar to the Mavic Air 2, but with a major camera upgrade it should appeal to enthusiastic consumers as well as pros thanks to the ability to shoot in 10-bit D-LOG and 10-bit HLG. 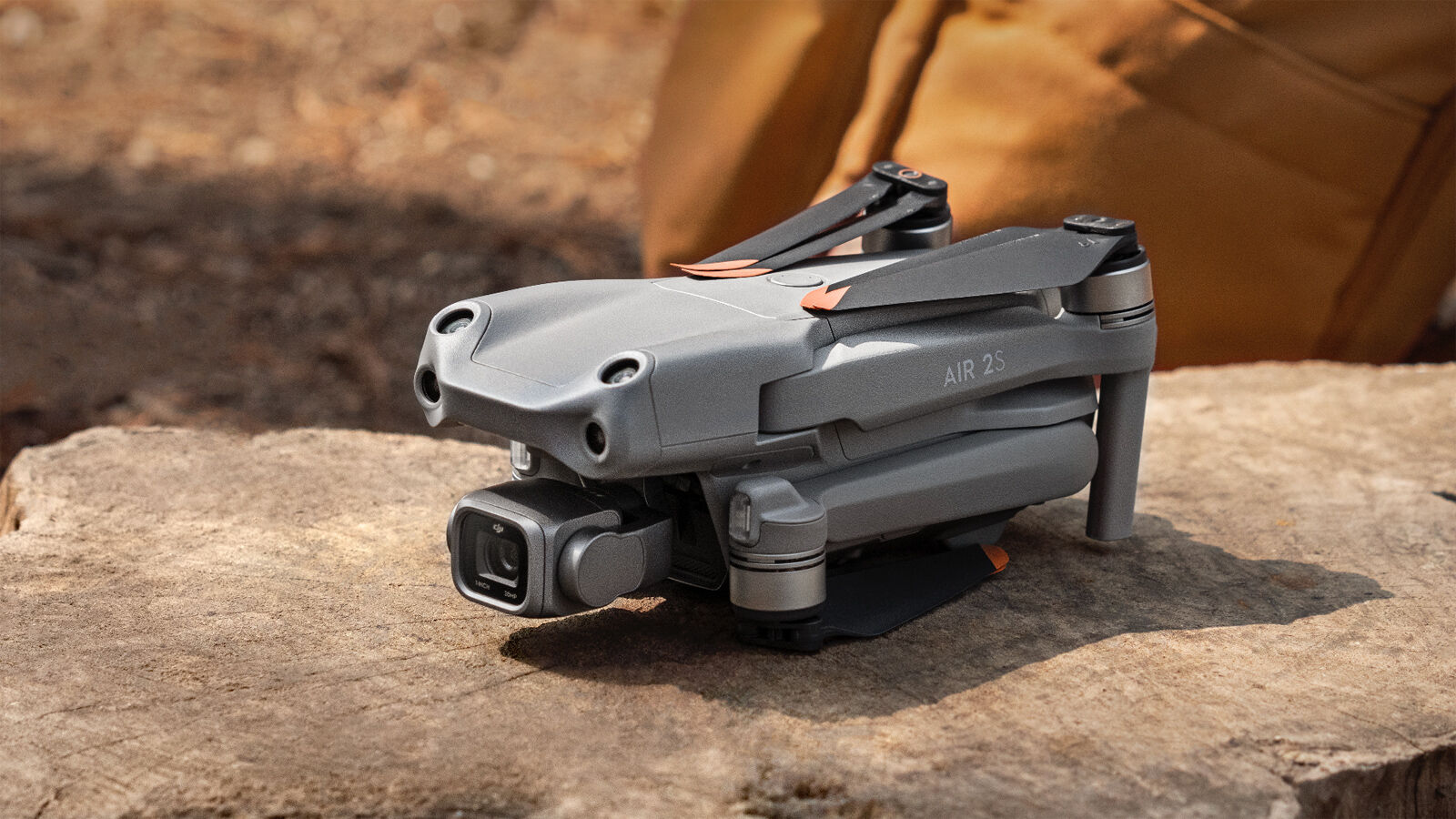 The controller hasn’t changed, in design at least. It’s not the smallest DJI has ever released, and still has no information screen, but it puts your phone where it should be: above the sticks, and it charges it as well.

The sticks themselves unscrew and are stored in the bottom edge of the controller, so the drone and controller as a package are still very portable – certainly more so than the Mavic 2 Pro which weighs over 900g and is larger. 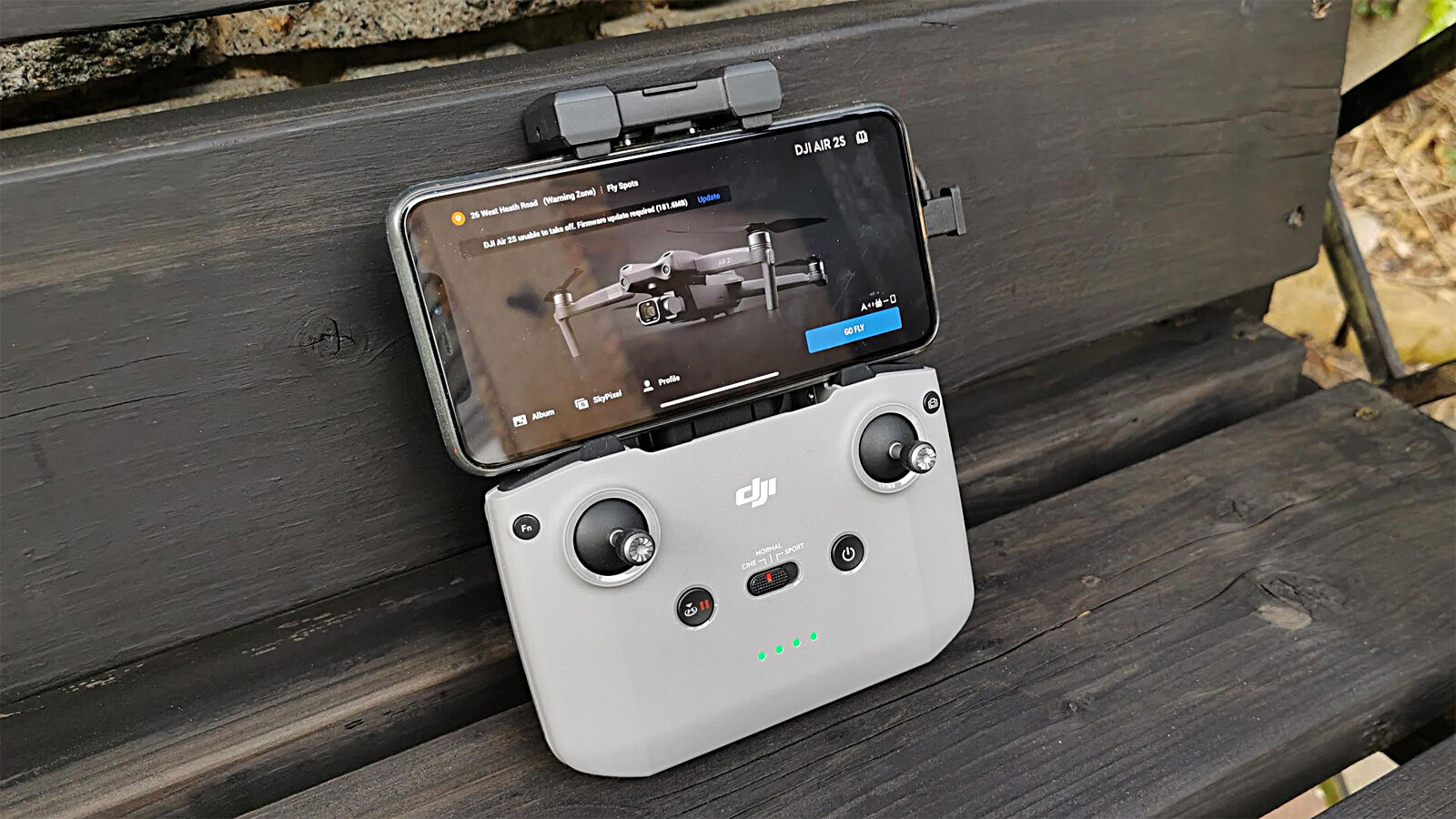 None of this affects where you can fly the Air 2S under the new drone laws: it will fall into the A3 category, of drones from 500g – 2kg, which means you must stay 50m away from people and 150m from places (such as beaches, buildings and more). 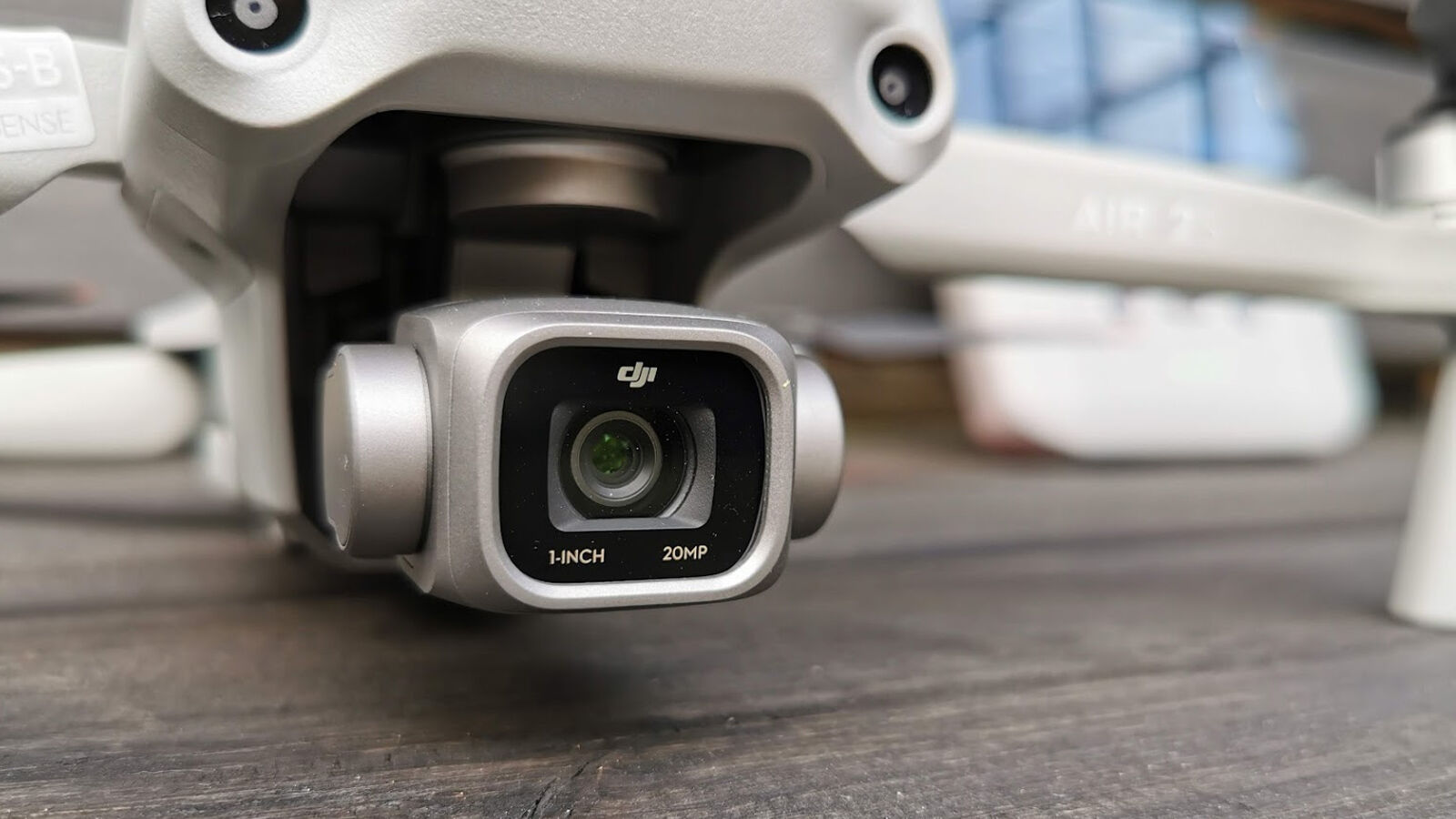 That’s why the new camera’s digital zoom capabilities are important here. Thanks to the 20Mp sensor which can now shoot 5.4K video at 30fps, digital zoom is available. You’ll probably want to stick to only 2x rather than the 4x available at 4K and 8x at 1080p.

Any more and the resulting video looks like you’ve cropped in too much in your video editing software, but 2x is very much usable and lets you get closer to your subject without flying closer. You can see this for yourself in the video below (best watched in 4K on YouTube).

On the pre-release software I used for testing, zoom was only available at 4K30 or lower resolutions, and you can zoom further at lower frame rates, up to 8x in 1080p30 vs 6x at 1080p60. Zoom isn’t available in either of the two 10-bit video modes, either.

This camera isn’t, in case you’re wondering, the unit from the Mavic 2 Pro simply bolted onto a Mavic Air 2. It’s very similar, but has a wider field of view and a fixed f/2.8 aperture.

Some might find this too limiting, but for the majority who just want a drone they can pop in their backpack while travelling, it’s no problem at all.

Drones don’t only record video, and the Air 2S has a good few photo modes. As you’d expect, you have a choice of JPEG or RAW, but there are various panorama options which can stitch these 20Mp images together for a huge photo from 180-degree vistas to 360° spheres.

A 180° panorama, for example, is 8192×3072 pixels and stitched together from something like a dozen individual photos.

There’s also a new SmartPhoto mode that uses scene recognition (as phones have been doing for a while now) to intelligently pick the best settings.

Go for the Fly More Combo package and you’ll not only get a shoulder bag and two extra batteries, but also a set of ND filters which help to offset the fixed aperture in particularly bright light.

If you want to, you can change the default 8-bit video shooting mode to 10-bit D-LOG or 10-bit HLG. The former is a ‘flat’ profile designed for being colour corrected in video editing software such as DaVinci Resolve. Unless you’re working aerial footage into a bigger project with other RAW footage, though, you’ll probably be happier with the 8-bit mode.

However, the 10-bit HLG mode doesn’t require and post-processing: you’ll just need a TV or another device which can supports HDR video to enjoy the wider dynamic range.

All of the Mavic Air 2’s modes are here, including QuickShots, which are automatic creative flight paths which track a subject and offer a quick, shareable cinematic clip. Rocket, for example, shoots straight upwards to give a top-down perspective, while Helix smoothly corkscrews away from the subject. There’s also Boomerang, Dronie, Circle and Asteroid.

Don’t use these if you want the absolute best quality video, but they’re not really designed for that.

FocusTrack has been updates to include ActiveTrack 4.0 which has an improved obstacle avoidance algorithm and a wider sensing range. Spotlight 2.0 and Point of Interest 3.0 were available on the Mavic Air 2, but are also great modes when you want to keep the camera pointed at your subject and either have the drone fly automatically, or fly it yourself. 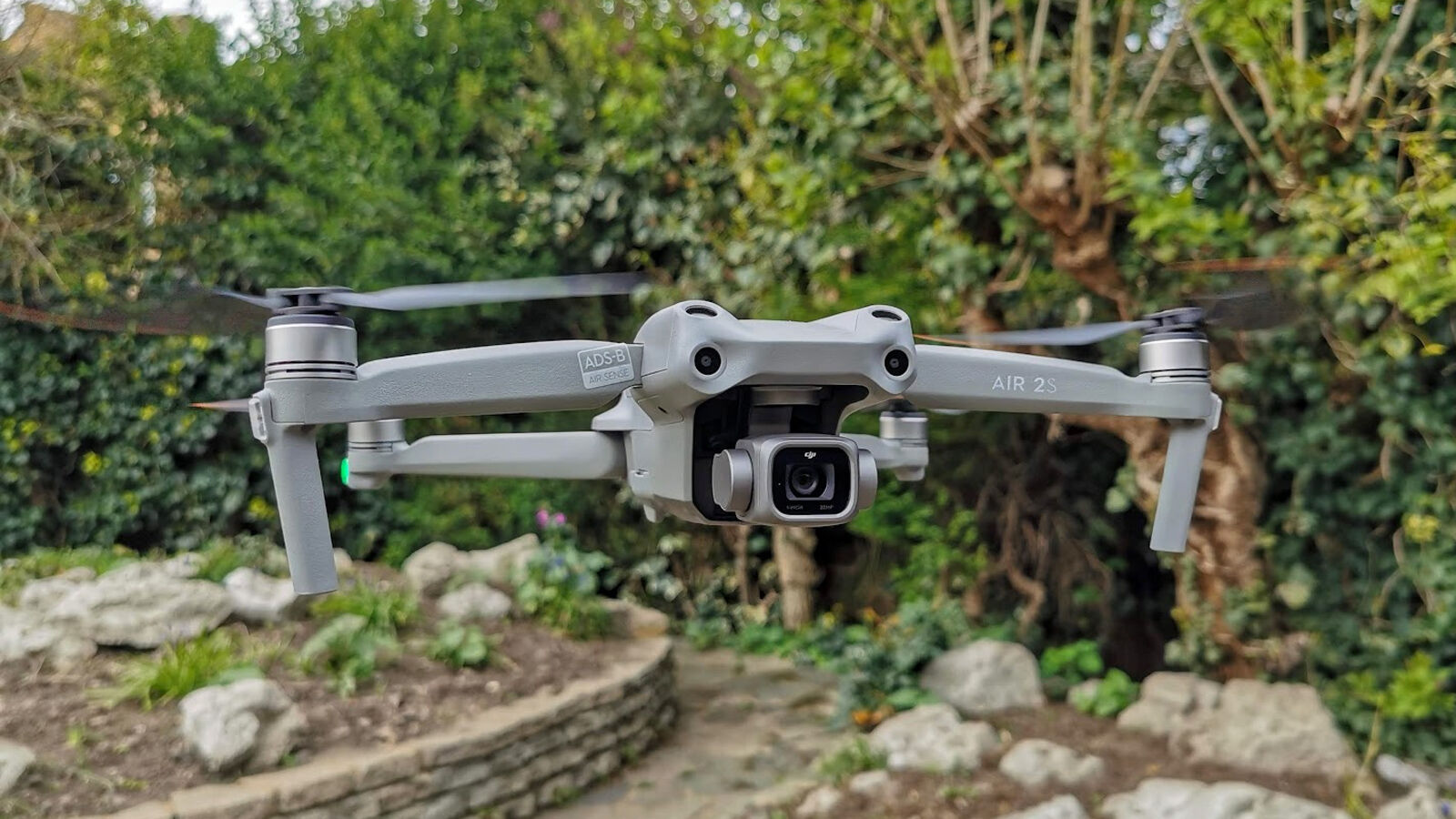 Those new upward-facing cameras add a fourth direction of obstacle sensing, and are handy not just when flying beneath structures or objects, but also when flying quickly forwards as the drone tips and the front cameras point downwards, but the top ones, which are angled, still allow it to sense obstacles when you’re going fast.

In the DJI Fly app’s APAS settings you can choose what happens when there’s an object in the drone’s path: brake or fly around (or under) it.

As before, there’s Hyperlapse which can create timelapse video, but the Air 2S gets the new MasterShots mode. This may not be something you’ll use a lot, as it’s essentially a montage of the various QuickShots modes in a single video: you draw a rectangle around your subject as usual, and then pick whether you want a small, medium or large flight area then the drone executes various manoeuvres on it’s pre-planned flight path and lets you choose a theme for the resulting video once it’s captured.

Flying safely is one thing DJI prioritises and in addition to settings in the app to limit height and distance from you, there’s also a geofencing system that prevents you taking off near airports or other places where airspace is restricted. 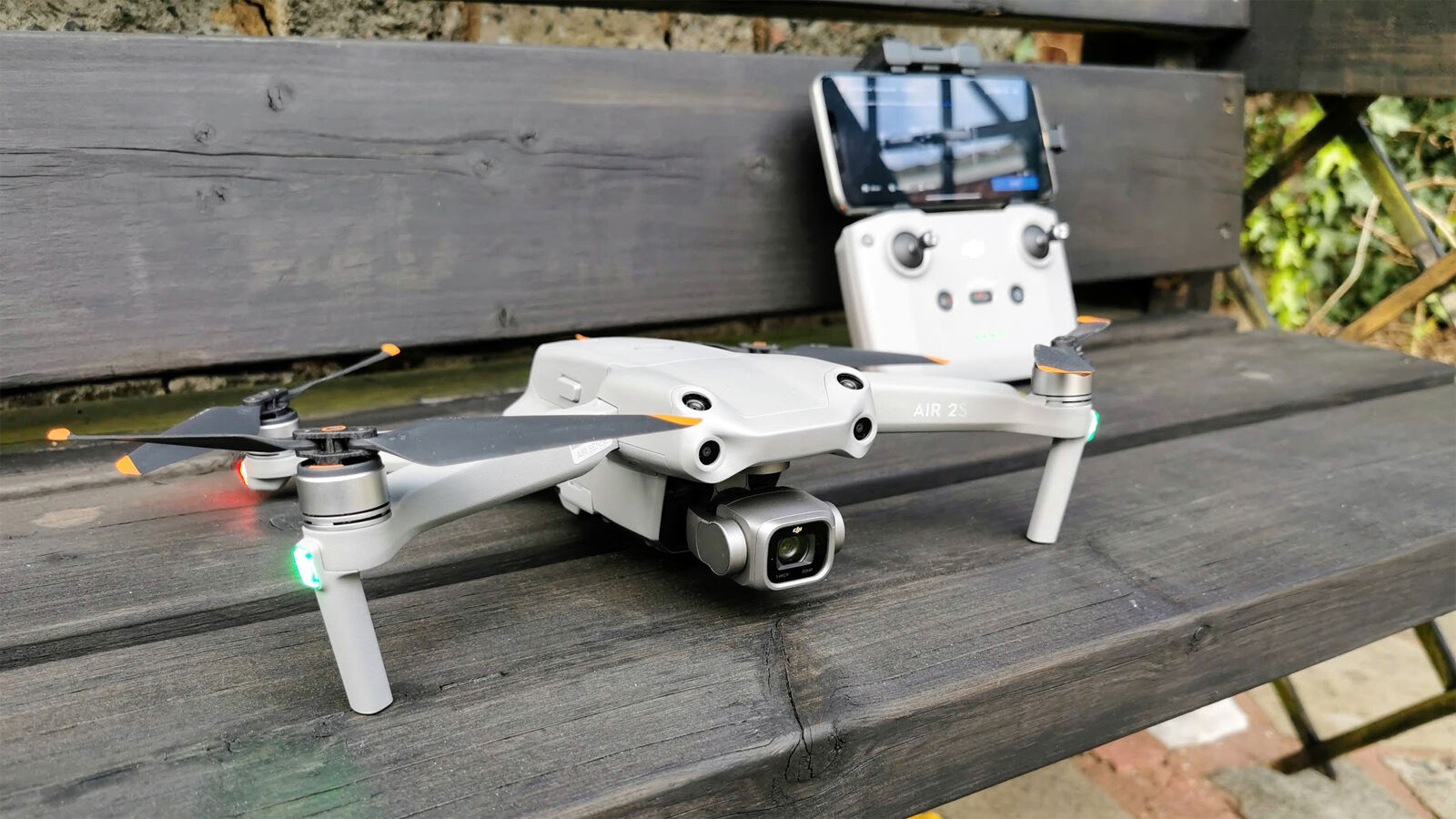 New – to the UK at least – is AirSense which wasn’t on the Mavic Air 2 initially. But it is on the Air 2S and will alert you of the locations of any nearby aeroplanes or helicopters so you can see where they are relative to the drone on the map.

Though claimed maximum flight time is three minutes less at 31 minutes, you’ll typically find that actual flight time will be less if it’s windy or very cold. And don’t forget that return-to-home will kick in well before the battery gets too low to ensure it can get back to its home point safely.

Flying the Air 2S is exactly like any other DJI consumer drone. It can take off and land automatically, and will hover in place when the sticks are in their central positions.

A Cine mode on the controller slows response to stick input, making for slower, smoother movement which in turn makes for smoother, easier to watch video. When you want a bit more speed, go for normal mode and if you’re trying to record a particularly fast-paced sport or just want to fly faster, there’s Sport mode.

As expected, photo and video quality is roughly on a par with the Mavic 2 Pro. Photos are sharp and detailed, with lifelike colours. If you’re inspecting them up close you will notice a little softening of focus at the edges, but it’s a minor quibble. 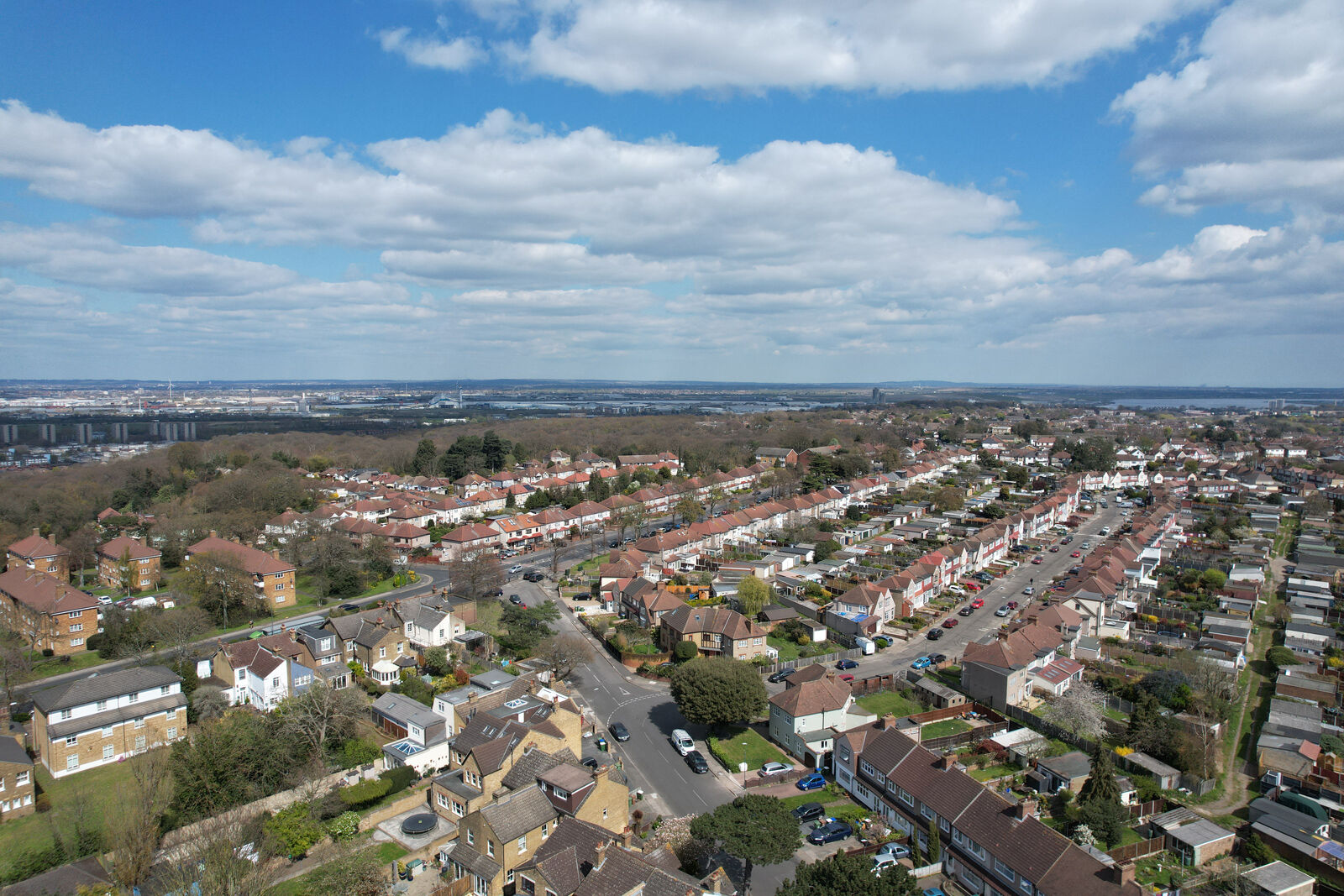 Video is great even in the default 8-bit mode. It looks sharp and colours are vibrant. Obviously, you’ll get the most detail if you use the new 5.4K mode – which you can then crop to 4K in your editing software – but you’re limited to 30fps if you do so.

Drop to 4K and there’s the option to go up to 60fps, allowing you to slow footage by half and get even smoother results. Go down to 1080p and you can shoot proper slo-mo at 120fps.

One area where the Air 2S beats the Mavic 2 Pro is in ISO. You can push up the gain in low light with the Air 2S without introducing lots of noise.

The Fly More Combo is better value (compared to buying all the components separately) and includes two batteries for a total of three, four ND filters, a three-battery charging hub and a shoulder bag. It costs £1169 / €1299 / US$1299 / AUS$2099.

If this is too much, then consider looking for a deal on a Mavic Air 2, which is still a very respectable choice, or even the DJI Mini 2 which can shoot 4K video, albeit at 30fps. But at £419 / $449, it’s significantly cheaper, even if it doesn’t have obstacle avoidance or ActiveTrack.

The Air 2S is a brilliantly capable drone and if you haven’t already got a Mavic Air 2 it could be worth going for unless you’d rather save that £130 / $200. It’s not just about the money though: only pros will be able to get the most out of the Air 2S’s 10-bit capabilities and if you are only going to shoot in standard 8-bit, you’re not going to notice a huge difference in quality at 4K between the Air 2S and Mavic Air 2.

It will perform better in low light, but this isn’t when most people fly. Put simply: if you care about eking out those last drops in video quality and know what you’re doing, the Air 2S is the obvious choice. If you don’t have the first idea about how to work with Log video and would rather stick to QuickShots and the editor in DJI’s Fly app, you’re probably better off saving your money and going with the Mavic Air 2.