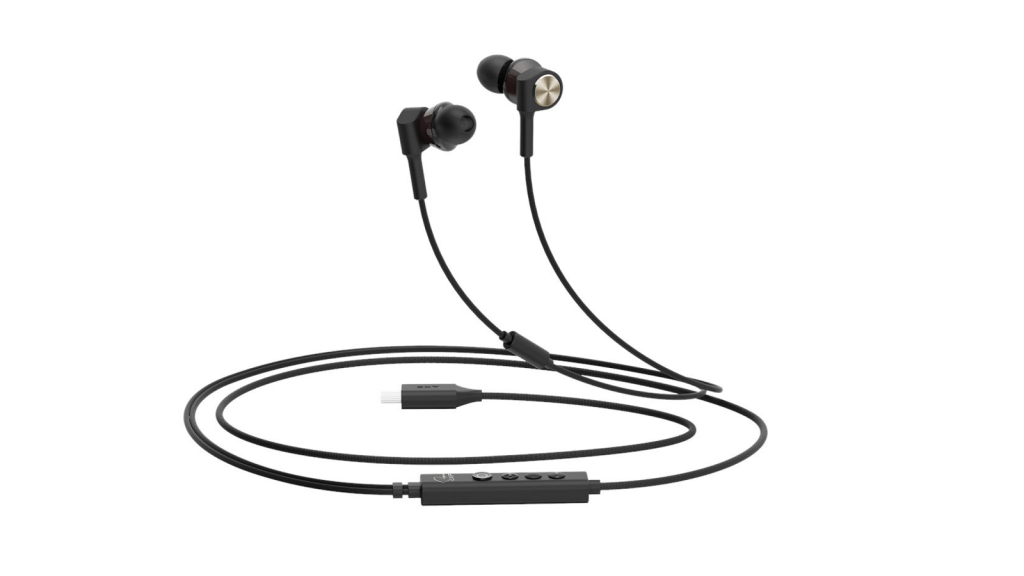 If you want excellent sounding USB-C headphones with the option of personalised audio, then the Creative SXFI Trio are a solid choice – unless you have an iPhone.

Personalised audio is slowly becoming more normal and while it might not be as advanced as Nura, Creative has its own Super X-Fi technology, as found in the SXFI Trio USB-C headphones. Here’s our full review.

Wireless earbuds might be the ‘must have’ style of headphones right now but there’s still a case for a traditional pair of wired earbuds.

For starters, you might not want to run out of battery life or you might require minimal lag for gaming. You may even have very small ear canals, like I do, so that going anywhere while wearing wireless earbuds means constantly worrying about when they’ll fall out.

After testing so many pairs of wireless headphones recently, namely earbuds due to their meteoric rise since the  AirPods, a pair of wired earbuds like the SXFI Trio seem incredibly simple.

There’s not a huge amount to say about design and build but let’s start with the USB-C port. This is how you’ll connect to a device and with so many phones and laptops ditching the traditional 3.5mm headphone jack, it’s a wise choice.

USB-C is stronger, still reversible and you also get the benefit of high-speed data. Outside of phones and laptops, there are plenty of other devices you can use them with, such as the Nintendo Switch, but Creative includes a USB-C to USB Type-A adapter to broaden the scope further.

It’s worth noting that although some Apple devices have USB-C and you can use the SXFI Trio with a Mac, iPhone is not supported, so users should look elsewhere.

The SXFI Trio are mostly black but there are some nice flashes of copper colour, especially the outer part of the earbud where concentric circles are reminiscent of an expensive saucepan. The earbuds have magnets here to attach to each other but it’s not very strong. 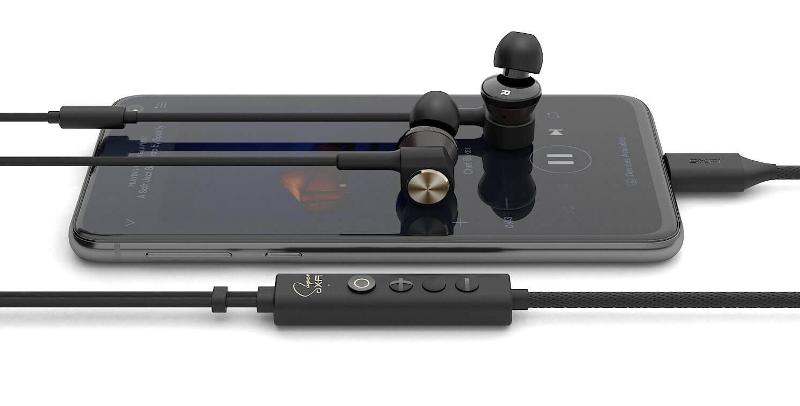 Inside the cable is “Kevlar-reinforced copper for exceptional tensile strength”, which is “wrapped in an aluminium and copper shield that makes it highly durable”, according to Creative. This is all wrapped in a nylon braid.

It looks and feels nice while avoiding tangles and the individual wires leading to the earbuds have a rubbery finish. Creative also includes a carry pouch and there are no less than five different sizes of tips – ranging from 10- to 16mm – so you should be able to find a good fit.

The last thing to mention here is beefy in-line control which is a bit chunky as it contains a microphone, additional tech (more on this below) as well as four buttons for playback, volume and toggling the Super X-Fi mode.

The Trio in the model name might be something of a mystery but it refers to the triple-driver setup. So, while a typical pair of headphones have a single driver for each ear, the SXFI has a hybrid system with three.

The firm says: “Each of the three drivers are carefully selected and tuned to handle a different range of frequencies in the audio spectrum, allowing them to drive audio more efficiently while making sure that audio fidelity is not compromised.”

So, there’s a bio-cellulose dynamic driver for bass, an armature mid-range driver and a third armature super tweeter. A lot of those words don’t mean much but essentially the system works like some bookshelf or floor standing speakers. 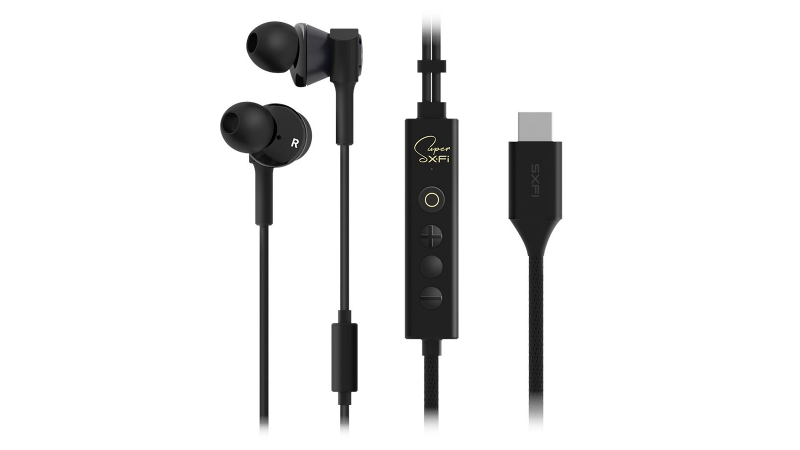 The larger drivers are 10mm and Creative says the SXFI Trio have a frequency response of 8-30,000Hz which is massive. Most offer 20-20,000Hz which matches the human hearing range but there are benefits to going beyond this, such as being able to feel sub-bass.

You can plug the headphones in and use them without faffing around with any software and they sound pretty great. I also found them excellent for phone calls.

However, one of the key reasons to buy these headphones over rivals is the clever technology that Creative offers and this is where, in part, the chunky in-line control comes in. It’s not even that big really, but bigger than one with basic buttons and a mic.

Inside is Creative’s ‘WIRE’, which is a much smaller version of its stand-alone ‘SXFI AMP’ – a £139 headphone amp – but this still uses the same Super X-Fi UltraDSP Chip built-in supporting up to 24-bit/96kHz Hi-Res playback. Unlike Nura, which gauges your hearing by playing tones into your ears while you wear the headphones, the SXFI app uses photos to map your ears.

The app doesn’t have the most intuitive user interface but it’s easy enough to figure out after playing around. You’ll need to use it to take photos of your ears and face to get personalised audio. This is near impossible without getting someone else to do it for you.

As well as the mapping, the SXFI app can be used to play locally stored files, but more useful is the graphic EQ which gives you a huge amount of control over the sound. There are also five presets you can use: Cinema, Classical, Flat, Game and Pop. 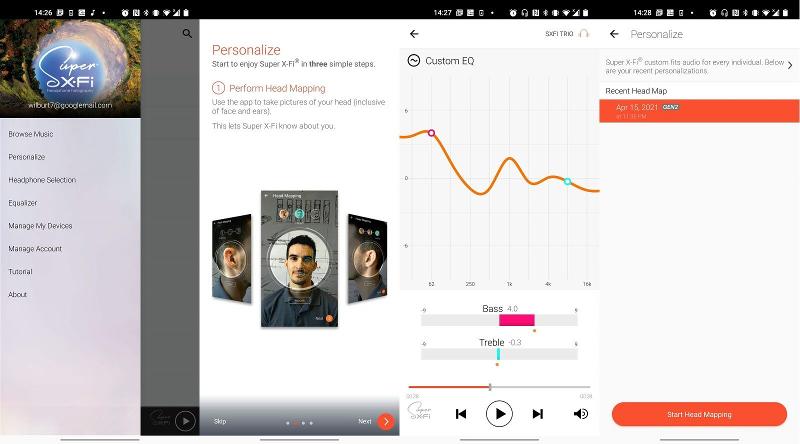 Note that you’ll need your profile to be loaded onto the headphones for it to work when you plug them into something like a Window 10 laptop. Also, I used an OnePlus 9 for my testing, but Samsung users may have issues.

Creative says: “Most Samsung phones implemented their USB-C differently from the Android standard, and thus exhibit mic compatibility issues. The music playback function is not affected.”

It’s also a shame you need to set up your head mapping via the Android app before you can get the personalised sound on other devices. It would be good if Creative could make software for Windows and Mac, too.

How the SXFI personal head mapping works for you may differ, but here’s how I found it.

Listening to the headphones in a regular stereo mode is excellent: the Trio earbuds sound great for almost any music genre, watching YouTube, taking a phone call or podcasts. Switching the SXFI mode on presents a very different experience.

It’s essentially a virtual surround sound mode and could be thought of as Creative’s version of Dolby Atmos, with the firm calling it audio holography. It’s not comparable to the wizardry of the Nuraphone but is still incredibly spacious and immersive.

However, you probably don’t want to leave it on all the time.

Whether it helps or hinders depends on what you’re listening to or watching. For example, it makes some folk and classical tracks feel like you’re in the recording studio with the artist but other music like dance and metal genres can sound a little odd and tinny so, like me, you may well prefer the more direct nature of stereo.

If you watch a lot of movies and similar content or do a lot of gaming, then the SXFI mode is brilliant for this kind of task, really adding a dynamic and fluid sense of movement to the audio.

The good news is that you can easily switch this feature on and off with the button on the in-line control and the change is almost instantaneous. This means you can just pick whichever one you prefer, depending on what you’re using the SXFI Trio for.

They don’t appear to be on sale at any retailers but the UK store is currently offering them for £99.99.

Check out our chart of the best headphones and best budget headphones.

Wireless headphones have their advantages but the reliability of wired headphones, plus things like never running out of battery can be hugely attractive.

You can get cheaper USB-C headphones but if you can afford the Creative SXFI Trio then they have a lot to offer. Excellent style and build quality for starters, although stronger magnets to keep the earbuds together would be welcome.

You’ll mainly be spending the money to get the SXFI software which maps your head and offers personalised audio. Essentially a virtual surround sound mode similar to Dolby Atmos.

This is not the level of personalisation that Nura has, but this is significantly cheaper and the headphones can sound great in either stereo or SXFI mode with their triple driver setup and Creative’s in-line amp.

That SXFI mode doesn’t sound great for everything though, but switching it on and off is easy with the in-line control. It’s just a shame the software is really designed for Android so you’ll need to use it here to get the benefit of the personal mapping before plugging into a PC, Nintendo Switch or other devices.

iPhones are not supported so if you have one and are looking for some headphones, then look elsewhere.