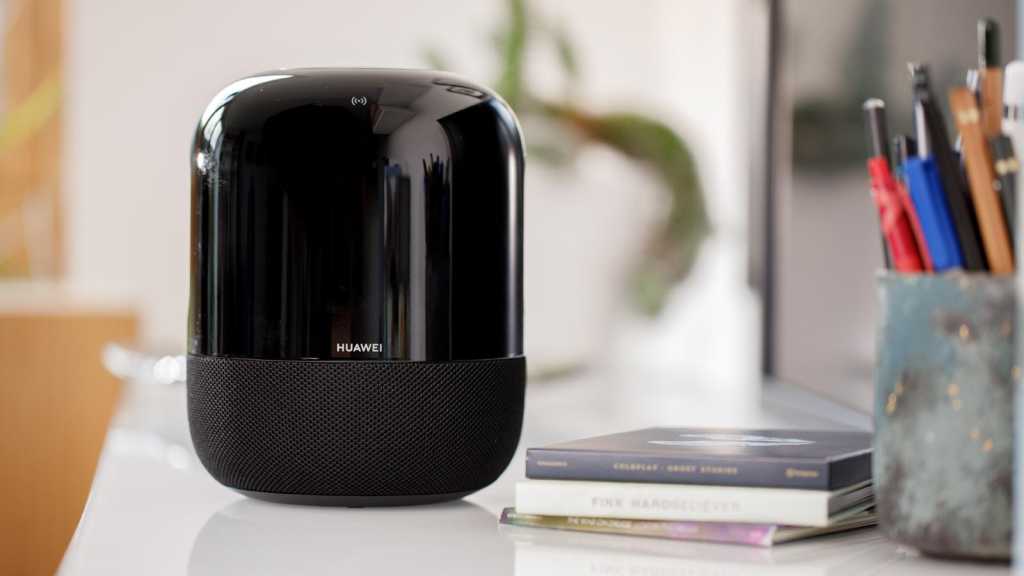 If you’re not looking for a smart speaker and can push through the quirky user experience – to put it lightly – then the Huawei Sound is a bassy powerhouse at an affordable price.

Huawei has followed up its Sound X, made in partnership with French audio company Devialet, with a smaller and cheaper Bluetooth speaker. It’s still made in collaboration with the well-known audio brand and aims to offer big 360-degree sound for your home without breaking the bank.

While it’s certainly one of the best sounding compact Bluetooth speakers we’ve ever tested, the Sound has a few quirks that mean it’s not a no brainer. It will appeal to certain groups of music lovers.

While the Sound is smaller than the Sound X, the first thing I noticed getting it out of the box was just how heavy it is.

That’s typically a good sign for a speaker as big powerful drivers use heavy magnets, but at 2.2kg it’s a beast and might not be suitable if you have a flimsy shelf.

In terms of design, the shape is similar to the Apple HomePod but with fabric only covering the bottom, not the whole speaker. It’s understandable that Huawei didn’t want this to look exactly the same but the glossy section provides a fish-eye reflection of your room and although you won’t be touching it often enough to leave many fingerprint marks, it does quickly get covered in dust.

Huawei obviously realised this and has included a cleaning cloth in the box. I’d rather fabric than the glossy finish but that’s a personal choice. I have to admit, the holes in the sides showing off the passive units inside do look very cool. 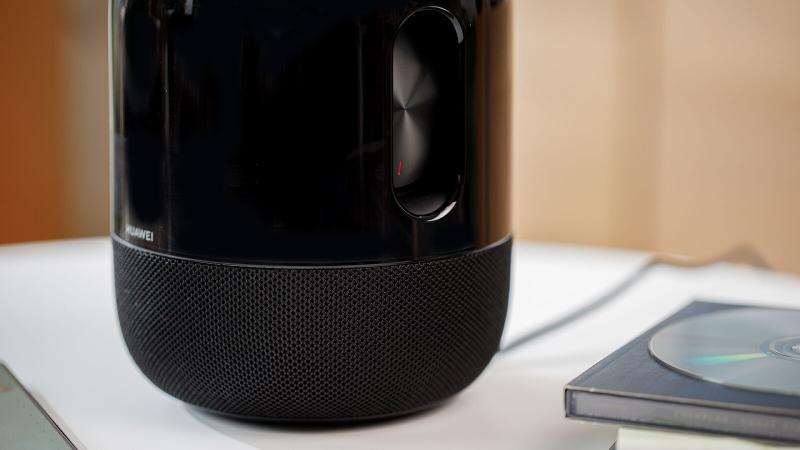 What you don’t get a choice on is the colour, with the Sound only coming in black.

Like some rivals, there’s a circular section on the top with a multi-coloured ring light around the edge and four touch buttons in the middle. The little logo on the front is where the NFC chip lives for tapping your phone – more on that latter.

The touch buttons light up when your hand gets near but can be a little finicky in use, sometimes not registering a touch. Using the volume buttons can occasionally result in audible pops from the speaker.

Oddly, the multi-function button, which I assumed would at least control playback without having to pick up my phone, doesn’t seem to do anything while music is playing. In actual fact, it’s the mute mic button that controls pause/play – go figure.

You can also quickly ‘mute’ (play/pause) the speaker by covering the button area – as long as you touch three buttons with your palm.

Something to note is that while this is a 360-degree design, the Sound does need to be plugged into the mains and even has an external power supply like a laptop. Huawei’s marketing material shows it on a small table in the middle of the room but conveniently doesn’t show the cable. 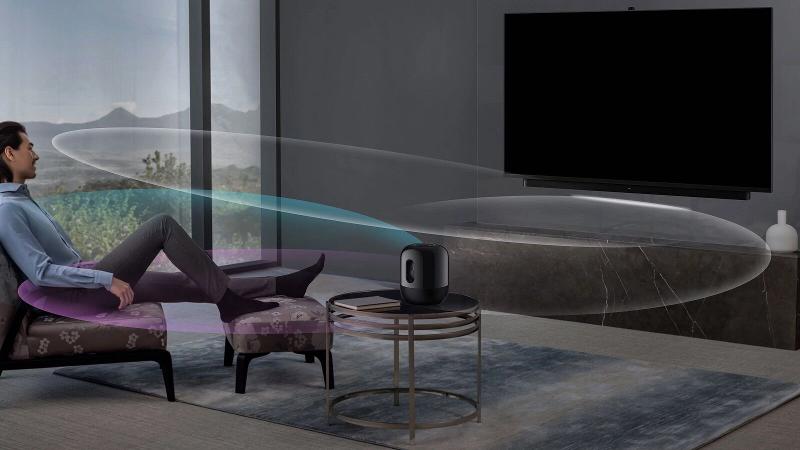 It’s more likely, unless you have sockets in the floor, that the speaker will sit on a bookshelf of desk which somewhat negates the need for the design. Typically, the speakers we test offering 360 sound are battery-powered.

Design quirks aside, the Huawei Sound is a quite confusing speaker. It’s a Bluetooth speaker, yet it does also have Wi-Fi connectivity and one of those touch buttons is to mute the microphone. So, you’d be forgiven for assuming this is a smart speaker.

Things aren’t exactly made clear from the box the speaker comes in, the manual, or even Huawei’s website.

So, to explain as best I can, this is primarily a Bluetooth speaker and the Wi-Fi is so you can use the Sound with the AI Life app as well as give you another way to connect.

As per the Sound X, while in China this supports Huawei’s own virtual assistant Celia, the microphone doesn’t do anything in the UK or the rest of the world, and this does not support the Google Assistant or any other digital assistant outside China. 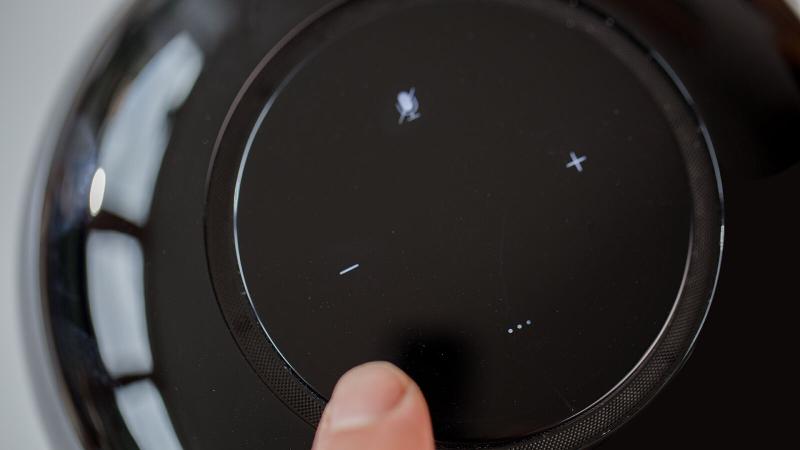 Setting up the Huawei Sound was not easy. Like most tech products these days, the incredibly small quick start guide tells you to get the Huawei AI Life app and follow the instructions, but nothing worked here – automatic scanning could not find the speaker, nor could scanning the QR code on the base.

I connected in the traditional fashion via my phone’s Bluetooth settings so I could at least start listening to music and was later advised to get the AI Life app via the AppGallery – Huawei’s own app store. As I’m not currently using a Huawei phone, this requires sideloading by apk.

This did work but it was quite a hassle and something many users won’t want to do.

Huawei promises me that this isn’t the user experience customers will get, saying: “We are confident that users will be able to expect a seamless experience using the most up-to-date version of the Huawei AI Life app.”

Fingers crossed you don’t have the experience I had.

Although you can use the Sound like a basic Bluetooth speaker, you are missing out on various features by not using the AI Life app.

This provides you with alternative ways of connecting as well as other features like different sound profiles as well as a dial dedicated to controlling the bass. OneHop lets you tap your phone on the speaker to connect, which is the method I used the most.

You will need a phone with NFC of course, and it’s worth pointing out here that the Huawei Sound doesn’t currently support Apple AirPlay. 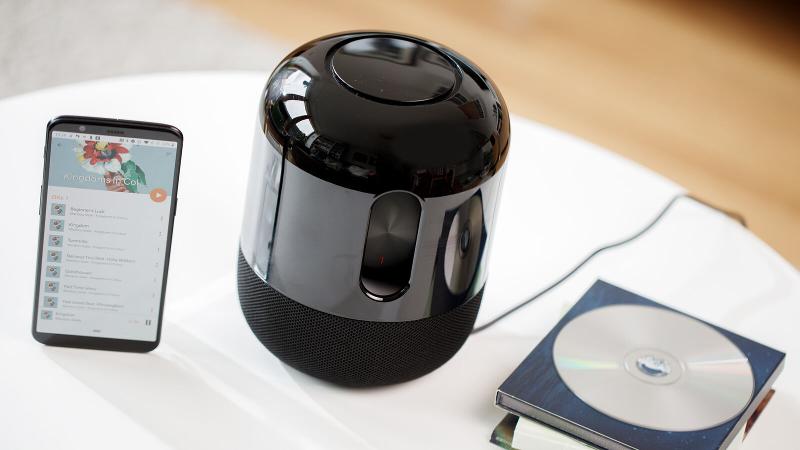 The other wireless option is UPnP which should allow you to cast to the speaker from within music apps. While this is advertised on the UK page for the Sound as well as in the app, Huawei confirmed with me that it’s not available outside of China.

Huawei also includes a 3.5mm jack on the back of the speaker which is a nice option if you have something like a record player you want to connect. There’s no cable in the box, though.

The weight of this speaker and the fact it has an external power supply are indicators of how much power it has. It’s easily one of the most powerful Bluetooth speakers I’ve ever tested.

It has half the number of drivers of the Sound X, so there’s one downward-firing woofer and then three full-range speakers mounted around the bottom facing out in different directions. As mentioned earlier, the holes in either side of the speaker give you a glimpse of the two SAM (Speaker Active Matching) passive units which are in a “Push-Push” configuration.

This essentially means they are bass radiators and they resonate with the woofer to “to deliver robust bass tones while suppressing membrane distortion to produce unfiltered audio.”

As you might expect from a speaker developed with Devialet, the sound is seriously impressive. You might want to think of this as a compact subwoofer that also has some other drivers in it as well.

A lot of speakers have good bass, but the ones that can rival the Huawei Sound in this department are many times bigger. At this size, the speaker is simply in its own league with booming, powerful bass that’ll give your memory a jog about what it was like to be in a night club when they were open. 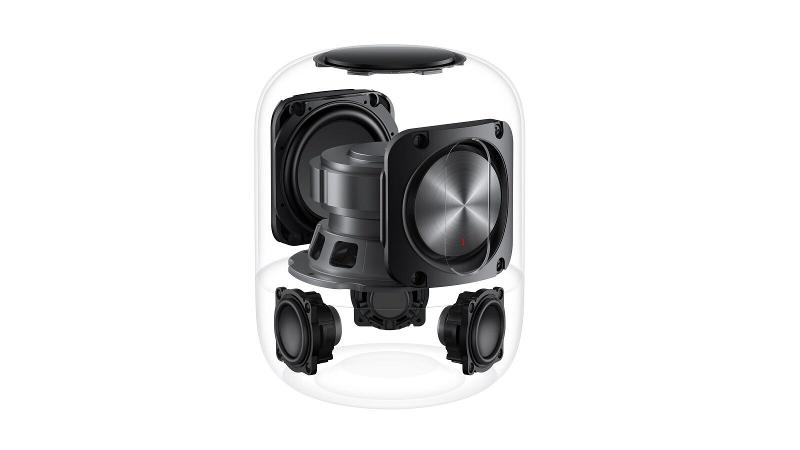 It’s the kind of bass you can feel in your chest and certain tones push against your eardrums with a physically apparent force of air pressure – occasionally it can be slightly uncomfortable but some people may enjoy the audio vigour.

This is all with the bass set to the default level so you can even push it higher in the app should you want to – and amazingly the plastic casing doesn’t reverberate under the strain, either. There’s so much power here that I rarely needed to push the volume beyond 30% when listening at my desk.

The setup and tuning mean the Huawei Sound is great for bass-heavy music like drum and bass and generally any EDM (electronic dance music). However, it’s not particularly well suited to all other genres.

The three smaller drivers provide excellent clarity at the top-end so delicate instruments like a classical guitar sound crystal clear. However, the mid-range is a little muddy and so fans of rock, metal and similar genres are better off looking elsewhere.

You can play around with the sound effects in the AI Life app as well as turning the bass down but I don’t think it helps enough. There are three options to choose from: Hi-Fi, Vocal and Devialet’s Space SoundStage.

The speaker often pops when switching between them which isn’t ideal and personally, the special SoundStage option from Devialet is my least favourite making it sound like the music is contained within the speaker. Ironic considering it’s designed for surround sound.

The vocal option is ok, but Hi-Fi is by far the best sounding profile to me with a warm and spacious feel.

With the sound covered, it’s worth briefly talking about Bluetooth and Hi-Res Audio. The Huawei Sound doesn’t support codecs like aptX but does have LDAC developed by Sony and allows for lossless audio playback.

That’s great news for Hi-Res fans and you have either the right files to play or a subscription to a service like Tidal HiFi, Deezer Hi-Fi or Amazon Music HD. If you’re just streaming from YouTube then there’s little point in getting a speaker like this.

Coming in at £199 in the UK, the Huawei Sound is quite affordable in the grand scheme – especially when you look at the cost of Devialet’s own devices. The Phantom II is £990!

You’ll have to get the speaker from the official Huawei store where it’s currently reduced to £169. That’s an amazing price, but there’s a slight spanner in the works: if the Sound X isn’t too big and heavy for you, then you can now get it for just £178 at Amazon, £179 at Currys PC World or £199 from Huawei.

The Huawei Sound is an oddball of a speaker due to the way it’s a completely different product outside of China, yet there are still various signs of the smart hardware and software it’s got.

Huawei doesn’t do a good job of advertising or explaining the details of this so it’s understandable if you think you’re buying a smart speaker with a mic, Wi-Fi and smart sharing.

The reality is far from this and it takes a while to figure out how this thing works and what it can do. Essentially, it’s a plain Bluetooth speaker with NFC and you’ll have to remember that the mute mic button is actually for playback.

It’s not a good user experience at all, but if you can get past these issues then it’s an incredibly powerful and well-made speaker in a compact size for an affordable price. The bass is astonishing but with limited control over the tuning, it’s not suited to all styles of music and other tasks.