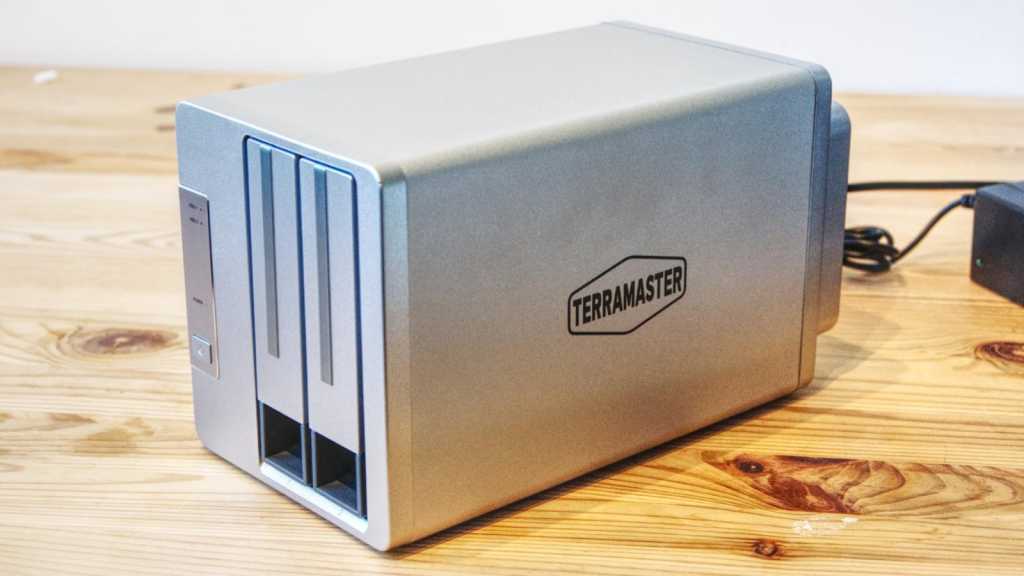 The D2-310 takes familiar TerraMaster technology and turns it into a localised RAID facility for old drives. It just lacks software and a cost that’s the same as a two-bay NAS from the same brand.

TerraMaster has carved a reputation for building robust NAS boxes that offer outstanding performance for significantly less money than the higher-profile brands.

But alongside its extensive range of NAS hardware, it also makes an exciting selection of DAS (Direct Attached Storage) devices that use the same styling.

Today I’ll be looking at an entry-level DAS product, the D2-310, explaining how this differs from a pre-installed external drive from Seagate or Western Digital and where this might fit into a small home or office environment.

With the possible exception of its rack-mounted NAS solutions, everything from TerraMaster comes in a silver aluminium extrusion capped at both ends with plastic. And, the D2-310 is no different.

Anyone familiar with the TerraMaster F2-210 might easily mistake this unit for that NAS box, as the enclosure and drive trays appear to be almost identical. It uses the same 40W external PSU, and while TerraMaster doesn’t document the exact details of the ARM chip it uses, I’d be surprised if it isn’t very similar, given its cost is the same. 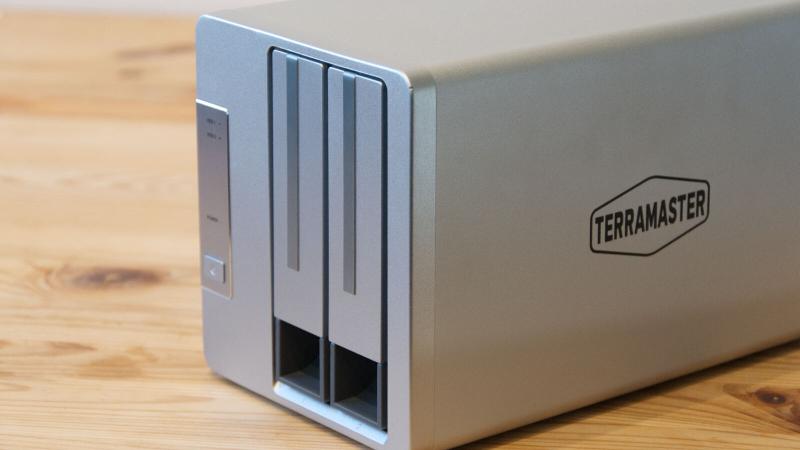 Where the D2-310 differs is that on the rear of the unit, there is no LAN port, only a USB-C port. That connects via a provided cable to any computer that has a USB Type-A port. This USB port does not need to be special, since the D2-310 uses USB 3.1 Gen 1, previously known as USB 3.0.

The unit comes ‘bare’ with no drives pre-installed and to make it operate you need to add either 3.5- or 2.5in drives. These can be conventional hard drives, hybrid or SSDs and the box has space for two drives.

It is possible to put 18TB drives in this machine, though that would involve an outlay that would dwarf the cost of the D2-310 for only one of those mechanisms.

You can buy any SATA drives to use in it,  but where this solution makes more practical sense is if you have unused drives available that you can repurpose by using the D2-310.

For those reading this and thinking how simple it all sounds, I should mention that there are a few caveats to installing drives based on how many you have and the sizes of them. These add a whole new level of complexity that ultimately might work for or against anyone wanting to use the D2-310 to make use of existing drives.

The D2-310 supports a range of drive modes that can combine the capacity into a single virtual volume, mirror the drives for resilience, or you can run it with a single disk in place. These configurations are referred to as RAID 0, RAID 1, JBOD and single drive mode.

RAID 0 striping and offers the benefit of enhanced performance since both drives are utilised in any reading or writing operation. Its limitation is that the combined drive is only double the size of the smaller of the two used as space on each drive must map directly to the other for this option to work.

RAID 1 is the mirror mode, and it will only work with two drives of the same capacity, and the performance is roughly the same as a single drive.

JBOD takes whatever space is on the two drives and concatenates it into a single volume, allowing for the use of different capacity drives.

And finally, the single drive mode is meant for one disk use. 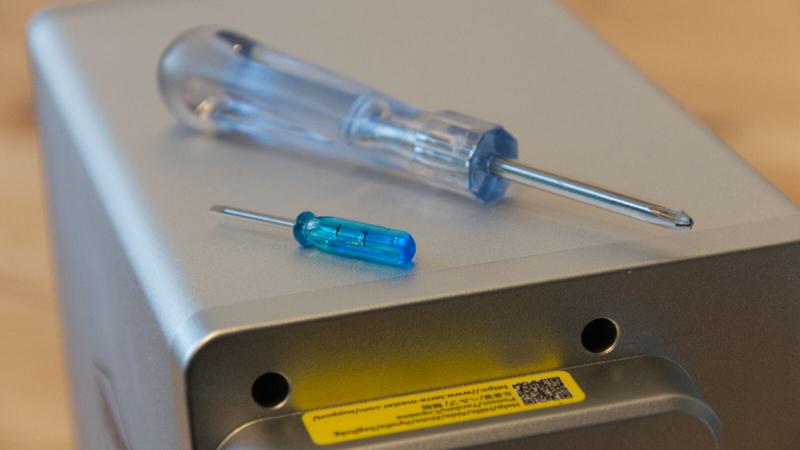 To set these modes, the user must set a tiny dial on the back of the unit above the USB port with four positions corresponding to the RAID 0, RAID 1, JBOD and Single drive modes.

TerraMaster provides a tiny screwdriver for the purpose of turning this small dial, and once the mode is set a phone tray ejector pin (also included) is used to hold the reset button down for five seconds and set the mode.

The change is almost instant. Unlike a NAS box, there are no checks performed on the validity of the drive surface. And, it is critical to understand that you can’t put drives with data on them, as everything will be erased when the mode is set.

With drives installed and mode set, it is then necessary to enter the Management console on Windows, or the Disk Utility on Mac OS to initialise the drive(s) and format the available space to whatever structure you prefer. That might be FAT32, NTFS or EXT4, depending on your needs.

From this point onwards, the D2-310 will operate like any external USB storage device allowing it to be moved between computers and be recognised immediately.

The only twist that needs mentioning is RAID 0, or mirror mode. The advantage of this option is that should one of the two drives involved die, it is possible to replace that unit, and the system will automatically rebuild the mirror from the working drive. 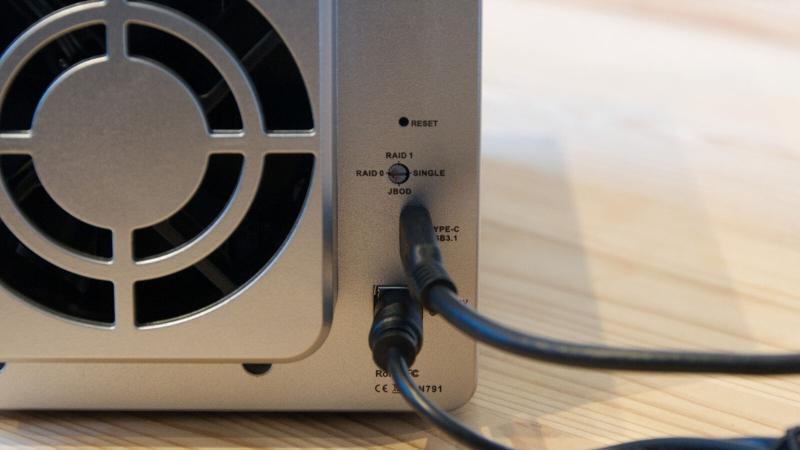 On the front panel are two LEDs for each of the drives, and in this situation, one of them should be green, for good, and the other should be flashing red, which is the problem drive that needs replacing.

During the rebuild process, the drive that is being rebuilt will flash yellow until the operation is complete and the system is fully restored.

Should you have a drive failure while using the other modes than RAID 1, you will experience data loss, either partial. In the case of RAID 0, it will be a complete loss. If you don’t want to experience that scenario, always plan to have the data in two places or more, and consider using mirror mode.

I picked these mechanisms because neither are especially quick, and as TerraMaster doesn’t explain in its documentation what would happen in RAID 1 with drives of different sizes, I wanted to see what would happen.

I predicted that the smaller drive would dictate the size of the RAID pack, and that is precisely what occurred. In our installation a 1.5TB and 1TB combined into a resilient 1TB volume.

The performance of this combined drive wasn’t fantastic at 99MB/s reads, and 94MB/s writes, with the slower of the two drives dragging down the overall speed. 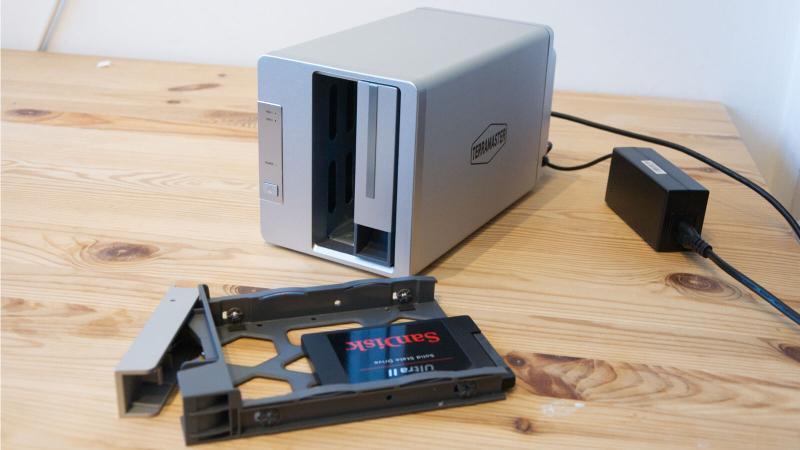 Switching to RAID 0 doubled the capacity and roughly the performance, with 193MB/s reads and 187MB/s writes. Obviously, with quicker drives, these numbers might have been better.

Using JBOD mode took the speed back down to the level of RAID 1, but gave us the total combined space of the two drives (2.5TB).

For a final test, I took out the physical hard drives and replaced them with a couple of 480GB SSDs, and reset the unit into RAID 0 striped mode.

These drives combined to create an 894GB volume with a read speed of 429MB/s and a write speed of 427MB/s. Considering that each of the SSDs was capable of more than 500MB/s reading and writing, that might be considered disappointing.

But 429MB/s over USB 3.1 Gen 1 is very close to the absolute maximum that is possible, so the limiting factor here is not the drives or the D2-310, but USB.

TerraMaster could have made this unit even quicker if they had used USB 3.2 Gen2, but the majority of these units are likely to end up with conventional hard drives installed, which wouldn’t be helped by a faster interface.

You can buy it from the official store or via Amazon.

That’s for the box only, as drives will need to be budgeted if you don’t already have any. That elevates the cost depending on the capacity of the drives and the number you intended to install.

For around the same price you can buy a WD Elements Desktop with 8TB of drive space pre-installed. It’s only a single drive mechanism, doesn’t have the advantages of RAID, but it’s hard to source a bare drive that matches that cost as a bare drive. Western Digital has the advantage that it makes drives.

Alternatively, Seagate makes the Backup Plus Hub, and the 6TB model undercuts the D2-310, as does its Expansion Desktop 8TB model.

But, these are unfair comparisons because these devices can’t switch out the drives, and they are mostly single drive solutions, with the performance limits and resilience of one physical hard drive.

The D2-310 is less expensive than any of the WD Duo range, but they all come with pre-installed hard drives making cost comparisons difficult. 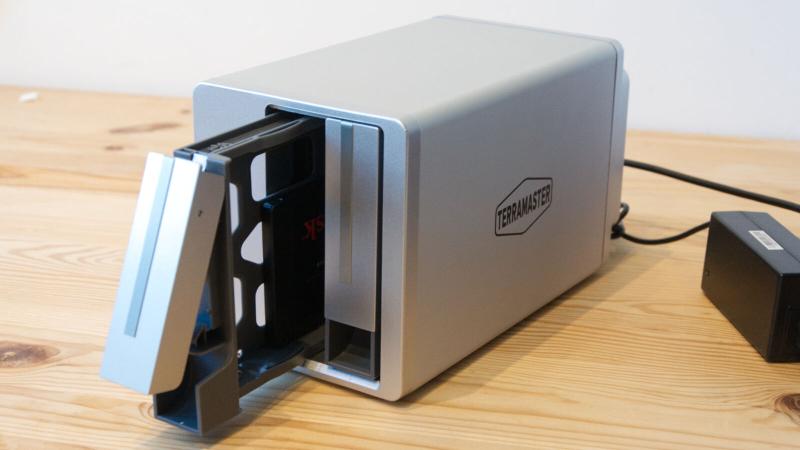 As an external drive solution, this box performs admirably, and it should work fine with almost any desktop or laptop computer made in the past decade.

The blot on this cultivated landscape is the cost, as it matches the TerraMaster F2-210, a NAS drive that can run applications and backup more than one computer. The D2-310 will be quicker for a single machine backup, but it doesn’t do anything else.

If you have drives sitting around, then this might be a good way to utilise them, but if you have to buy those drives then the economics of this unit starts to look less compelling.

What it also needs is a software tool to live synchronise folders on the computer with structures on the D2-310. You can buy utilities to achieve this goal and even bend Windows to do some of this, but a simple live copy utility would have made this solution much more elegant. And, ironically, you get this with the F2-210 tools.

Overall, the D2-310 does everything that TerraMaster promises, and for those with a spare pile of large capacity hard drives, it might be perfect. But for those that need to buy the storage to install, it doesn’t make monetary sense when compared with pre-installed storage hardware.