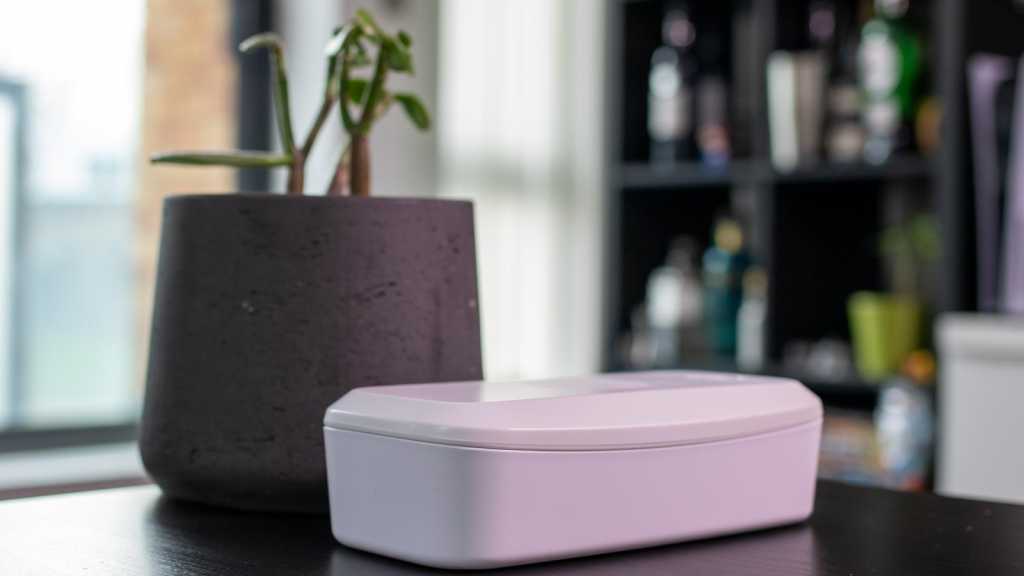 Kikkerland’s sanitiser is portable and versatile, capable of sanitising bulkier items than many rivals, which are limited to phones, keys, and wallets. You’ll have to give up wireless charging and a slick design though, and there are some concerns around UV light leak.

UV phone sanitisers are one of the newer bits of tech that seem almost certain to become household staples going forward.

They already come in a variety of shapes and sizes, and this UVC model from Kikkerland emphasises portability and flexibility by packing the UV tech into the lid, rather than the box, meaning you can take it on the go and sterilise objects too big to fit neatly inside the box.

The whole kit is 23x11x6.5cm – essentially big enough to comfortably fit even a large phone with room to spare, though probably not quite enough space for a phone and a wallet at the same time without stacking them – which would block some of the UV rays, defeating the purpose.

The design is simple, white, and functional – this isn’t something you’re especially likely to want to show off. The box itself is just a bit of white plastic though, with all the tech built into the chunky lid. It emits UV-C light – the specific band of ultraviolet light that’s capable of killing germs.

You’ll need to plug in a Micro-USB cable (included) to power it, so while this is portable it isn’t battery-powered. A single button on top of the lid handles everything: one press for a short (3-minute) cleaning cycle, two presses for a longer (10-minute) run, and a long press to turn it off mid-cycle if necessary.

Because the emitter is in the lid, you don’t actually need to attach it to the box, which is where the portability comes in. You can leave the bulkier box at home and just take the lid with you, then place it on top of objects you want to clean while you’re out and about. Without the box to bounce the light rays around this is unlikely to give you as comprehensive a clean, but it’s better than nothing.

I can’t verify how effective the UV cleaning tech here actually is, but it is at least simple and easy to use, and I appreciate the option for both short and longer cleaning cycles.

It is worth caveating here that UV light can be dangerous, with risks including skin cancer. That does make me a little cautious about using the sanitiser lid without the box to block it, as it will expose you to a few more errant rays than you might like. I’m not enough of a health expert to speak to how much risk there really is here though.

As a safety precaution, the UV emitter will turn off automatically if it detects that it’s being lifted up, to reduce exposure, though this does take a second to kick in.

While UV-C light is itself invisible to the human eye, this sanitiser also emits some visible blue-ish light which makes the box glow in use. This can be a touch unsettling given the aforementioned risks with UV-C, and I prefer opaque UV sanitisers that block light entirely – if only for my peace of mind.

At £50, available from Kikkerland or Oliver Bonas in the UK, the Kikkerland sanitiser is a little expensive for its feature set. It’s a little more than the £40 Belkin Boost Charge and less than the £60 QDOS sanitiser, though both have the benefit of doubling as wireless chargers.

Neither can quite match the Kikkerland for portability, though Moshi’s Deep Purple sanitiser can – though at £150 that also costs much more.

I appreciate the versatility and portability of Kikkerland’s sanitiser, which is capable of sanitising bulkier items than many rivals, which are limited to phones, keys, and wallets.

That portability does come at the cost of the wireless charging found in many other sanitisers, and the design is cheaper and clunkier too. I do also have concerns about the added risk of UV exposure from using the sanitiser out of the box too.

If portability is a priority and you can’t afford the Moshi, then this could be a good option – though make sure you’re not swapping one health concern for another.

To see all the sanitisers we recommend and find out how the Kikkerland measures up, check out our round-up of the best UV sanitisers we’ve tested.