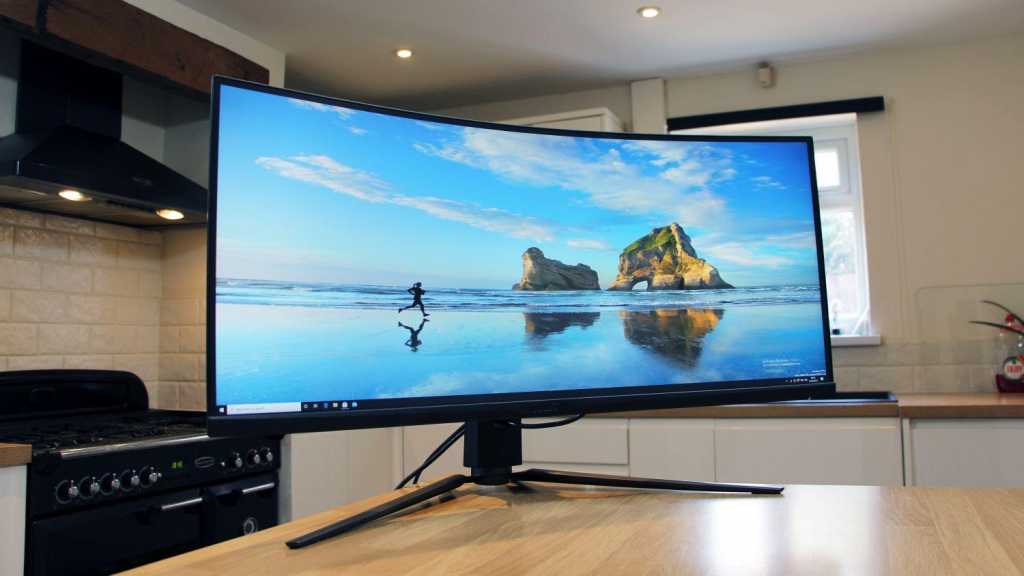 The MSI MPG Artymis 343CQR combines top-notch design and excellent image quality to provide a superb single-player gaming experience, and it has impressive features and design throughout. It’s just expensive and not well-suited to eSports.

The MSI MPG Artymis 343CQR is one of the most exciting gaming monitors on the market – a bold, large and ambitious gaming display with loads of high-end features.

This panel serves up a bold curve, a widescreen resolution, and 165Hz AMD FreeSync, but it costs £899 in the UK and $899 in the US, so it’s a significant investment if you want to turbo-charge your gaming setup.

The MSI squares up against keen rivals, too. The AOC Agon AG493UCX is a broader alternative with a 32:9 aspect ratio, and the LG UltraGear 34GN850 shares many of the same attributes as the MSI but uses an IPS display and a subtler curve.

MSI’s wide, curved screen has a sleek logo and slim bezels, and it sits on top of wide, narrow feet. Around the rear, you’ll find customisable RGB LEDs and the build quality is consistently superb. The 343CQR has height adjustment alongside swivel and tilt movement and it supports VESA mounting. It doesn’t have portrait mode rotation, but that’s entirely normal for a widescreen.

This display is simple to manage once it’s on your desk, too. The on-screen display (OSD) has loads of options and a handy section that displays the screen’s key attributes. Even better is the Gaming OSD app, which replicates the menu system in Windows and makes the monitor far easier to tweak.

It’s a good start, but in some practical areas, the MSI is inconsistent or cumbersome.

Take connectivity: while it has two USB 3.2 ports and a USB-C connector, their rear positioning is awkward and that USB-C port doesn’t offer power delivery. Elsewhere, the HDMI and DisplayPort automatically recognise consoles and PCs, but there are no speakers.

MSI’s display weighs 9.2kg, is 315mm deep and 795mm wide, so it’s heavy and will take up plenty of space. It’s not particularly easy to build, either: the stand attaches to the rear with four screws, and the base requires another screw. With so many monitors using tool-free options, that’s disappointing.

Still, the MSI is simpler to handle than the wider, heavier AOC and it has more adjustment options. The LG is lighter with better port access and easier building, but its adjustment options and software aren’t as impressive.

The eye-catching 1000R curve dominates the MSI, and it’s tighter than the 1800R and 1900R designs on rivals. The smaller radius means that this display does a better job of wrapping around the user than other displays, which makes gaming more immersive.

The MSI MPG Artymis 343CQR has a 34in diagonal with a 3440×1440 resolution and a 21:9 aspect ratio. They’re conventional figures in the world of widescreen gaming displays and they work well with the smaller radius.

Its extra width means the screen isn’t too tight, which can be the case on some 16:9 panels.

The width, curve and resolution provide a stellar gaming experience. Racing games and flight simulators are absorbing and you get a more expansive view in RTS, RPG and FPS titles, too. For single-player gaming, it’s top-notch.

That said, the MSI is less adept in other situations. Keen eSports players will want a physically smaller display with a lower resolution and a higher refresh rate.

Plenty of people buy curved displays for both gaming and productivity and the MSI does offer huge space for large workflows or multiple applications, but the curve can distort some colour-sensitive workloads.

You’ll also need a powerful graphics card to handle this display. If your gaming PC is packing an Nvidia GeForce RTX 3070 or 3080, you’ll be fine, and AMD’s Radeon RX 6800 XT and 6900 XT will do the job, too – alongside high-end cards from the last generation. But weaker mid-range GPUs will struggle.

The MPG Artymis 343CQR has AMD FreeSync clocked to 165Hz, which is fantastic for single-player experiences and mainstream eSports but not high enough for top-level competitive gameplay. Happily, the monitor works perfectly with Nvidia graphics cards despite a lack of official G-Sync certification and it performed well in our tests, with butter-smooth gaming throughout.

The underlying panel is a VA display with 10-bit colour and a 1ms response time, which is a good specification for high-end gaming.

The rival AOC panel is wider and has a higher resolution, but it has a 1800R curve and a 120Hz refresh rate, requiring an even more powerful graphics card. The LG has IPS hardware, which could hinder contrast, and it has a 160Hz refresh rate alongside the same resolution as the MSI.

Once you’ve hauled the MSI from its box, you’re greeted by tremendous image quality. The factory brightness level of 202 nits is solid and the black point of 0.06 nits is brilliant. The resulting contrast ratio of 3,367:1 is fantastic – three times as good as IPS panels and high enough to serve up fantastic depth and vibrancy.

Games leap from this display, and the huge contrast ratio was maintained with the brightness ramped up to the maximum of 352- and at a more reasonable 150 nits.

MSI combines the superb contrast with great colour accuracy. The Delta E of 2.07 is accurate, and the colour temperature of 6,518K is superb. The 343CQR displayed 99.1% of the sRGB colour gamut at 120.1% volume and these figures combine with the contrast to deliver bold, punchy, and accurate colours.

The 343CQR is impressive in HDR games, too. The HDR peak brightness of 578 nits is joined by a black point of 0.03 nits, which means an HDR contrast level of almost 20,000:1. That is huge, and it delivers a solid, noticeable improvement in compatible games and media, with more depth in darker areas and added dazzle in lighter sections.

The MSI only has minor HDR performance issues. Its DCI-P3 coverage level of 85.1% is fine for gaming, but it does mean you’re missing a little bit of coverage compared to the best HDR displays. The MSI’s edge-lit dimming also means that the variations in contrast and backlight strength lack nuance.

Overall, the HDR output is bold but not particularly subtle.

Nevertheless, it’s an impressive result for a mainstream display and the only way to get a better HDR experience is by splashing out for an OLED panel or a screen with superior dimming; And that means giving up the curved widescreen or spending extra cash.

The MSI rounds off its performance with impressive uniformity and great viewing angles. There’s a bit of backlight bleed but that’s barely noticeable and the 343CQR’s response time and input lag speeds are great and ensure no problem in the fastest games.

The final test saw the MSI return an Adobe RGB coverage level of 79.1%, which means that this display is not good enough to handle colour-sensitive workloads in that space.

It’s a very good set of benchmarks and it compares well to rivals. The wider AOC has marginally better gamut handling, but its contrast and refresh rate abilities are poorer. The IPS-based LG has inferior contrast and HDR performance, so the MSI is noticeably punchier.

The MSI costs £899 in the UK from Overclockers as well as Amazon and Very, so it’s hardly cheap – the widescreen and the high resolution double the price when compared to conventional displays with this refresh rate.

You can buy it for $899 in the US from Newegg and Amazon.

Check out our chart of the best gaming monitors to see what else is available.

The MSI MPG Artymis 343CQR is a brilliant display.

It’s got fantastic SDR image quality and does a better job of handling HDR content than most gaming monitors. The resolution, tight curve and aspect ratio make it immersive and absorbing in most single-player situations.

MSI outpaces rivals when it comes to image quality and it’s usually got better design, too. This has good features and adjustment options and rock-solid build quality alongside intuitive software. It’s even handy for plenty of productivity situations, too.

There are few downsides, as with most products. Big eSports players should look elsewhere and you’ll need to make sure you’ve got a powerful graphics card to run this beast.

If your PC is sufficiently powerful and your bank account suitably flush, though, this is one of the best gaming monitors on the market, with tremendous performance and features throughout.