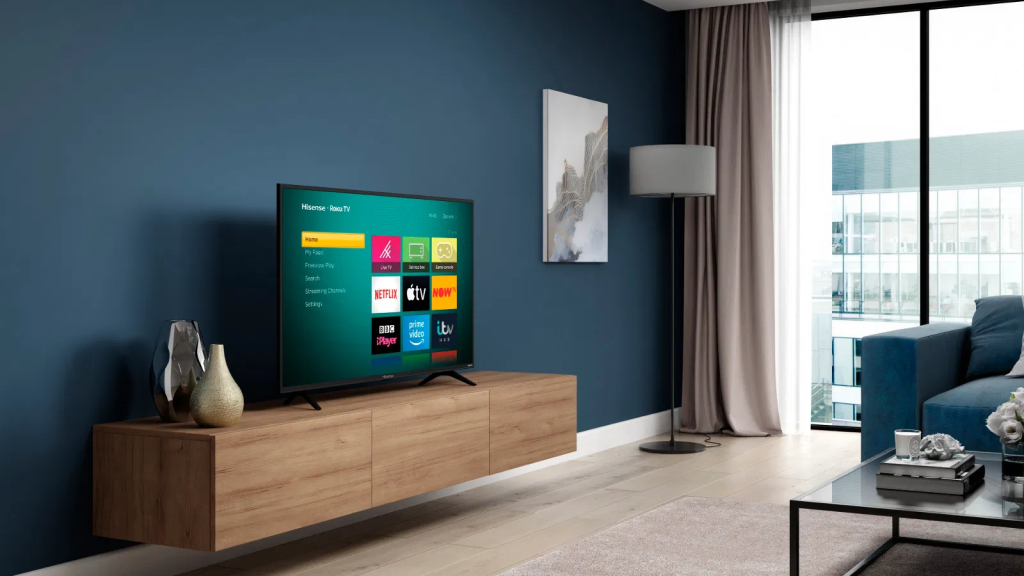 The 2021 Hisense Roku TV is one of the better options in the budget price bracket. Only a terrible remote and limited brightness hold it back from smashing it out the park.

Last year, Hisense and Roku teamed up for a cracking TV collaboration that brought a Roku TV to market and this very reviewer described as superlative, with a bunch of high-end features crammed into the bargain bracket.

With Roku’s 2021 refresh of that TV, the same is mostly true. However, it’s slightly less impressive this time around. As a result, instead of being a startling entry into the budget TV market, this year’s Roku is just… very good.

Roku’s influence is still what you’re paying for here, and while it’s more obvious in the purple directional pad adorning the slightly pants remote, it’s also in the feature-rich software. Roku and Hisense have been working together for yonks overseas, but it’s only recently that they’ve moved into the UK market.

If you’re familiar with last year’s model – the Hisense B7120UK – upgrades include a thinner bezel, better integration with voice assistants like Alexa, Google Assistant and Apple Homekit, and even AirPlay support, which will let you stream straight from your phone.

Currently, this refresh has only affected the 43-,50- and 55in models. I’ve got the 50in version in for review.

The A7200 has a cheap and cheerful plastic chassis, but the thinner bezel does mean that you won’t have to look at it too much, as all of the ugly plastic chunkiness is located behind the screen and probably up against your wall out of sight.

It’s fairly generous for inputs: three HDMI 2.0 inputs, jacks for composite, headphone, optical and AV inputs and even a USB socket. You’ll struggle if you’ve got a collection of consoles under the TV, but otherwise, it should be ample for all of your needs – especially as the built-in Roku software illuminates the need for an external media streaming stick or box.

The TV is supported by a pair of two-pronged stands. They attach to the base with screws, which is an easy installation and sturdy enough but is somewhat lacking aesthetically. Also, with the way they’re angled from inside to outside, it can be difficult to fit them on anything but the widest TV stand.

The remote is flimsy and it’s hard to talk about it without mentioning how it feels like I could crush it beneath my meaty paws. However, once you get past the disappointing build quality, it has shortcut key access to Freeview Play, Netflix, Rakuten TV, Spotify and Google Play (the latter four not shown in the press image below), in addition to your usual buttons for volume, command, control and all sorts of fanciness.

Roku’s TV OS is excellent, from the initial setup all the way through to just looking for something to watch with your takeout.

Roku’s big selling point, at least externally, is that they don’t have any overt interest in pushing any brands outside of Roku. This means that you can watch just about everything: NowTV, Apple TV, Disney+, Netflix and just about anything else you can think of is here.

The home screen has had a few updates since last year. It’s easy to navigate and is customisable so you can move the apps you use a lot to the top of the list. I got a lot of use out of Roku’s search function: it’s universal, and typing in a movie or TV series showed me where I could watch it.

It’s worth it if you’ve decided you absolutely need to watch The Matrix but don’t want to spend 45 minutes wrestling with different streaming apps one at a time. Better, if you’re going to have to pay for it, this can help you find the cheapest spot before you splash the cash.

If you’re a gamer, you’re well-served here too. During set-up, you can assign different HDMI sources with names, so you can flag your PS5 as “PlayStation” and then later you can just switch to PlayStation and you’re there, no mess no fuss trying to remember which port you plugged it into.

There were a few crashes on my sample TV, but outside of that I never had to think about Roku’s UI, which is the highest compliment I can offer. As with last year’s model, the UI’s strengths are also the TV’s biggest strengths.

The 2021 Roku TV iteration has a vertical alignment LED – VA panels are associated with best-in-class image depth and contrast. However, you do lose out on the superior viewing angles from an IPS panel but this doesn’t seem to be an issue here.

Hisense claims you can still get an 176-degree angle of visibility. Anecdotal evidence of me walking around the TV while clutching a bowl of cereal as my housemate tried to watch a variety of different shows and I didn’t notice any real degradation of image quality.

There are no local dimming zones through the panel, meaning contrast can’t really be enhanced, although you’ll only notice this with the HDR content.

Speaking of which, HDR playback isn’t exceptional. Brightness is just 225nits, which isn’t enough to have an impact and even though you wouldn’t expect it at this price, the lack of HDR10+ and Dolby Vision is a bit of a shame too.

Video upscaling is fairly mundane. You can tell the difference between the upscaled HD content and 4K content on the display because it is lacking sharpness somewhat. Edges are fuzzy, and if you are – for example – gaming on an Xbox or PS4 instead of their next-gen 4K-enabled siblings, you’ll notice some issues.

After a fiddle with the setting, the best option is to switch the TV to the “movie” preset. Everything gets a little tinge of green to it, but once you’ve got this enabled and you’ve turned off the noise reduction feature, it’s a pretty decent picture overall.

The only real weirdness is that, despite being direct-lit rather than edge-lit, the sides of the image are usually brighter than the middle. This can result in a picture that looks inconsistent, particularly when there are solid blocks of colour – not ideal if you watch a lot of cartoons.

Turn on “Game” mode and you can get your input lag down to 16ms. This will be useful for people playing hyper-competitive games, and is impressive on a TV of this price. Note that this is not a TV with HDMI 2.1 for playing a PS4 or Xbox Series X a 120Hz. It’s a regular 60Hz panel.

If picture quality is your top priority then check out the Samsung TU7100 or consider Hisense’s own U7QF if you can afford it.

The sound is kind of muddy on the A7200UK, and in the default mode, the bass is overpowering making it difficult to pick up dialogue.

This can be fixed, though. There’s a series of different presets, but the only one that’s really useful is the “Speech” mode, which brings the dialogue up and brings the background noise down. I found that quite helpful as someone who often has to watch TV with subtitles.

It’s worth being aware of the Dolby Audio and DTS Studio Sound compatibility, too.

You’ll want a decent soundbar to get the most of the TV to take care of this problem, as there isn’t really a lot you can do with what the TV gives you.

We’d generally advise picking something up from our best soundbars list for any TV you buy, but it’s really apparently here. For a good experience, a soundbar will pair nicely with the TV.

This Roku range is the only one in the UK and it’s currently only available exclusively at Argos.

The 50-inch model does offer a cracking selling point: a 50-inch 4K TV with HDR for less than £400 is a startling offer. Still, if you’re looking elsewhere then the best comparison would be JVC’s Fire TV Edition.

Take a look at our list of best budget TVs to see what would be the best fit for your space.

In last year’s review, I said that TVs under £500 are generally worth actively avoiding. That is changing and a large part of it is feature-rich budget TVs like this model from Roku and Hisense.

The price of 4K HDR TVs is tumbling down and the bracket is now very competitive. It’s still not the best TV in the world, but for £400 for the 50in version, it’s hard not to be charmed by this.

As I said above, this TV’s biggest strength is the Roku UI. It really is cracking with plenty of streaming services at your fingertips and a useful search function. You needn’t worry about deciding what media stick or box to buy because it’s built-in.

Picture quality is good with a low latency gaming mode, too. However, cheaper TVs like this still lack brightness to support HDR content and upscaling can have issues, too.

The downsides are largely acceptable given the more than affordable price, even if it feels like I might crush the remote every time I use it.