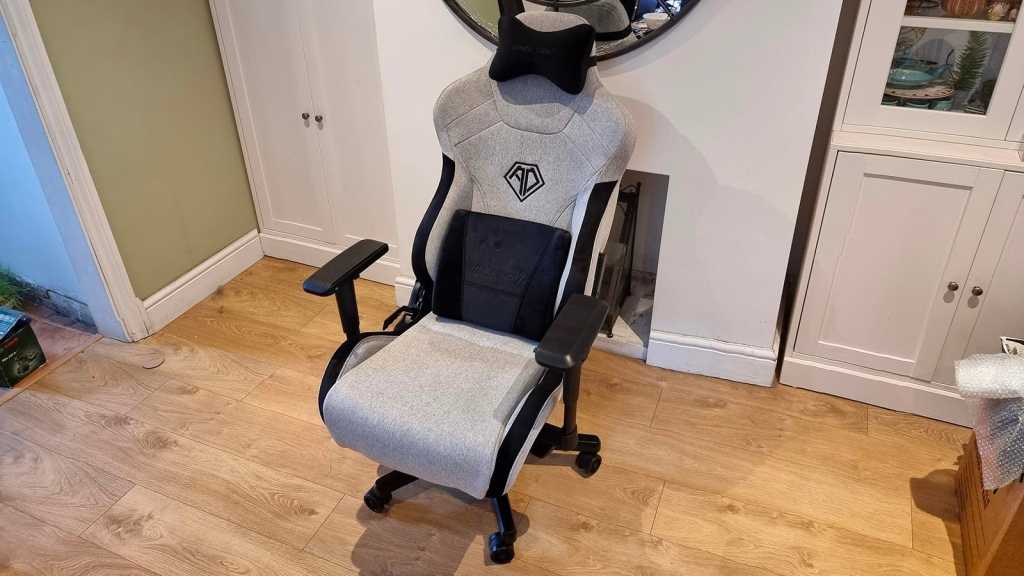 With three lockdowns under our belts in the UK, you’d have thought I would have had the sense to sort myself out with an appropriate chair back when we all first became shut-ins, however, for the majority of this COVID-imposed home-working experiment, I have subjected my spine to a hard wooden dining chair, with nary a hint of padding.

As such, the offer to test out AndaSeat’s T-Pro 2 Series gaming chair proved all too alluring; at the very least to save my remaining vertebrae but also as a chance to test out one of the few fabric-covered seats that the company makes.

Being a super king-sized chair, the T-Pro 2 arrives in a not-insignificant box, and with a steel frame and an aluminium base, weighs in at approximately 32.5kg – unopened. In the pursuit of health and safety, those looking to shift the entire thing up their stairs before unpacking should consider this a two-person endeavour, otherwise moving the unpacked parts of the T-Pro 2 to their intended destination is the way to go.

The chair comes partially pre-assembled, with everything bar the mechanism guards and the five-star aluminium base consisting of numerous parts out-the-box, all ready to simply slot or screw into one another. All the screws (14 in total) are included (some of which already come with washers pre-fitted) alongside a single hex key that can be found in a sealed packet.

The included instructions come in multiple languages, although there’s clearly imperfect translation work going on, that leaves some minor ambiguity around some of the finer points of the assembly process (based on my interpretation of the English language steps).

Nothing in the construction of the T-Pro 2 should prove particularly challenging, with only the sheer size of the chair making mounting the seat to the top of the piston, along with attaching the backrest to the base, both a little more trying than anticipated.

The plastic guards that snap and screw over the reclining mechanism proved the most problematic, however, with multiple attempts needed to position everything correctly before committing to a final fit.

If you’re building the T-Pro 2 solo, expect construction to take up to an hour, however with help, best estimates would be around 30 minutes.

The standout trait of the T-Pro 2 is the linen fabric that comes stretched across the majority of the seat’s base and back. For a company that’s established itself with a series of PVC faux-leather gaming chairs, the material change is a notable departure that sets the T-Pro Series’ apart and opens up the brand to a wider customer base.

If you’re not enamoured by the company’s Marvel or Fnatic-branded leatherette seats, the T-Pro 2 offers a more conservative and sophisticated take on the gaming chair formula; with a familiar form still born from the company’s heritage building racing seats for the likes of BMW and Mercedes Benz, but without the flair or gaudiness typically associated with “gamer gear”.

As such, the T-Pro 2 in grey (pictured), black or blue should offer the same ergonomic and comfort benefits of a typical gaming chair, whilst better complementing a wider range of room decor and styles, compared to the many PVC-covered alternatives that AndaSeat and its rivals offer.

The company includes a ‘large’ lumbar support cushion, and a ‘medium’ headrest pillow too, both wrapped in black velour (which also appears as an accent fabric on the chair itself). The lumbar pillow simply rests against the inside of the chair’s back but without any sort of fastening may fall down when the chair isn’t being sat on. The neck pillow, meanwhile, relies on an elasticated strap with a side release buckle to stay affixed in place.

Unlike the majority of AndaSeat’s (not to mention other manufacturers’) chairs, the T-Pro 2 lacks holes around the headrest area, with fabric covering the entirety of the backrest. As such, the neck pillow – with its elasticated strap – has to be stretched far around the outer edge of the backrest; this paired with the slanted geometry at play, means it can tend to slide out of alignment all too easily.

Two black plastic armrests rise out of a metal crossbar running through the frame attached to the underside of the seat, which itself sports two controls: one to raise and lower the chair, while the other locks and unlocks the T-Pro 2’s rocker mechanism.

The lever on the right side, where the seat base and back meet, features a grooved handle so that despite its thin profile, it’s comfortable to grip and pull up when reclining the seatback.

The gas piston is encased in a telescopic black plastic shroud, at the base of which attaches the sizeable five-star aluminium base, mentioned earlier. The base then rests on five pairs of wide PU-covered wheels, which offer smooth movement and rotation that adds to the general impression of the quality fit and finish on the T-Pro 2, even if they pick up – and hold on to – detritus more readily than I’d have liked.

The main thing to consider before picking this particular chair out of AndaSeat’s portfolio is whether you’re tall enough to ride. Based on the super king-sized frame that it utilises, the company recommends the T-Pro 2 for those measuring between 180cm and 210cm (approximately 5ft 9in to 6ft 9in tall), meaning my 5ft 7(.5)in frame is technically below the minimum threshold.

Fundamentally, if you are a little on the short side, the T-Pro 2 is still a very comfortable chair. Even at the piston’s highest extension, my feet could still place flat on the ground and while the lumbar cushion may have ridden a little high in my case, it still felt well-placed and supportive.

Where those of shorter stature might notice issues comes with elements like the armrest placement and the already-problematic neck pillow.

It’s important to state that the ‘4D’ black plastic armrests offer an outstanding level of adjustment; with each able to be raised or lowered, moved laterally left or right (so that the parallel distance between the two can be narrower or wider), slid forwards or backwards or angled inwards and outwards, independently.

Most should be able to find some comfortable position for the armrests but if you’re looking to use this as an office chair, it will serve you best if you are larger/broader-framed (to fall within the chair’s target proportions), as the fixed distance between the bases of the two armrests is otherwise a little too wide to render them effective and within reach of your forearms and elbows at all times. A little padding in the same linen fabric would have been nice too.

As for that neck pillow, it feels and even looks over-filled, with a firmness that – even at the correct height – is unyielding. With none of those aforementioned holes, there was also no way for me to attach the neck pillow low enough around the backrest of the chair (an issue of this chair having been designed for a taller frame than mine, rather than a failing of the chair itself); again something to consider if you don’t fall within the intended size range for the T-Pro 2.

That all-important linen finish isn’t just aesthetically more subtle and sophisticated, it’s far kinder to your skin too. Those who’ve spent hours gaming or working at a PVC-covered chair will likely be familiar with the material’s tendency to trap heat, and should any exposed skin come into contact with the leatherette for an extended period, there’s also the dreaded sweaty “unsticking” that may occur.

By comparison, the linen covering doesn’t creak when sat on and won’t crack or flake off over time, but there are some obvious trade-offs. It’s a far-less stain-repellent finish compared to PVC or actual leather, so if you’re one to eat or drink at your desk – or while gaming – you’ll need to be more considerate about what or whether you consume anything on or around the T-Pro 2. There’s also the fact that fabrics like this are more likely to trap smells than the mainstream alternatives.

Spending the working week sat on the T-Pro 2 has proven that the 60Kg/M3 density foam padding that AndaSeat has opted for here was the right call; offering enough give to support your body, without feeling like it’s pushing back too hard, or conversely, destroying your posture by being too flimsy or thin.

I found little use of the rocking function, but some users absolutely will, while the range of the reclining backrest was equal parts surprising, impressive and alarming; being able to lock the back at numerous angles from 90°, up to a full 160° extension. AndaSeat describes this position as ‘sleeping mode’ but despite the chair’s sturdy base, I felt far too unconfident about the stability of the experience when lying back to commit without question each time (even though once there, the T-Pro 2 felt perfectly pleasant to lie on).

If you’re unfamiliar with the gaming chair market, it’s not uncommon to expect to spend a few hundred pounds on a good quality chair, although aspects like size, materials and features all play a part in overall pricing too.

The AndaSeat T-Pro 2 is available in numerous markets already – including the US and UK.In Blighty, it can be picked up directly from AndaSeat’s UK site for £399.99 (although at the time of writing it’s enjoying a £50 discount) or Amazon UK for a similar price, with the option of professional assembly (for an additional fee).

There’s no denying that the AndaSeat T-Pro 2 is a well-designed and fully-featured gaming chair. You pay a premium for the fit, finish, materials and size of the thing but it’s a robust throne that can accommodate both taller and heavier users without issue, whilst also offering great support and long-lasting comfort.

If you’re a fan of the brand and are looking for a fabric-covered offering, this is your only choice right now, which – despite its versatility – may not be the best fit for smaller folk (as I discovered), who might benefit instead from a marginally less substantial alternative in the form of Secretlab’s Omega chairs – wrapped in their equivalent SoftWeave fabric, or more modest entries like the gaudier Nitro Concepts S300.