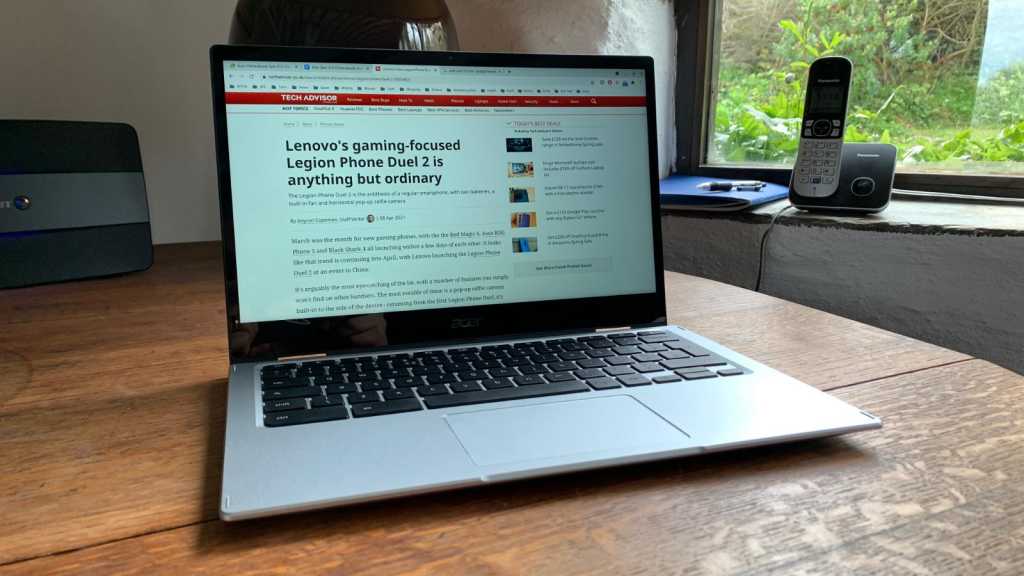 Long battery life and the lightweight chassis make the Acer Spin 513 a good option for road-warriors or those with long commutes. A few glitches mean its stablemates might be a better choice.

Acer’s Spin range of Chromebooks have been impressing me of late, be it at the budget or premium end of the scale. Now, the company has brought a mid-range laptop to the table with decent specs and a shoulder-friendly weight. So, does the Spin 513 maintain the reputation built by its siblings? I spent a couple of weeks with one to find out.

The first thing you notice when taking the Spin 513 out of the box is how incredibly light it is. At around 1.3kg, it’s a very comfortable device to put in your bag and carry around. The main contributing factor to this feathery heft is the fact that the chassis is plastic rather than metal.

Acer has given it a smart brushed steel look with a bevelled edge. It feels reasonably sturdy but the lack of a more durable material could make the Spin 513 prone to cracks or breakages if you’re not careful.

If that’s a deal-breaker for you, then stepping up to the excellent Acer Spin 713 will fix things, as the metal chassis should ensure a more robust device, not to mention the overall impressive performance. You can see how much I liked that Chromebook in my Acer Spin 713 review.

As with the 713, the side edges taper inwards after the sections that house the various ports, while the underside is home to twin downward-facing speakers. Two strong hinges support folding the screen back through 360 degrees, so you can use the device as a standard laptop, put it in a tent mode to watch movies, or turn it into a makeshift tablet.

The latter is usually a bit of a chore, with laptops being too heavy for those duties, but the lightweight nature of the 513 comes into play here making it a decent convertible, albeit one I wouldn’t want to use for too long.

Acer fits a few different connectors to the 513 flanks, with two USB-C (one on either side), one USB 3 port and a 3.5mm headphone jack. The right side is also home to the power button and volume controls. Not a bad selection at all for a slim, light laptop.

As you may have guessed from the tablet reference, the Spin 513 comes with a touchscreen, which is a feature I like to see on modern Chromebooks. With so much of the focus in ChromeOS on the web, being able to tap the screen to select options is a real bonus.

The display itself is a 13.3in IPS panel running at a Full HD resolution, with a maximum brightness I measured at 318 nits. While the definition and colours are all great, the limited brightness means it struggles in strong sunlight, something made even more challenging by the highly reflective display.

Where the lightness of the Spin 513 makes it a highly portable device, you’ll probably want to stay inside if you’re working on it.

The two downward-firing speakers on the underside of the chassis deliver reasonably loud volume, with no discernable distortion at full volume. The tones are quite heavy on the treble side though, with bass tones struggling to make any impact.

That’s not unusual with laptops at all, and again the lack of mass in the 513 probably contributes to these limitations.

Acer uses the same island-style keyboard layout that I’ve encountered on several of its other models and is the order of the day for pretty much all Chromebooks these days.

The spacing is comfortable for typing, and while at first the keys feel spongy, as noted with the Spin 713, I soon found I could type quickly and accurately on the platform. Sadly, there’s no backlight on the keyboard, so you’ll want to minimise using it in the dark unless your touch-typing skills are up to speed.

The trackpad is a medium-size unit that responds reasonably well to gesture controls and clicks. I prefer to use the tap feature on laptops as opposed to physically clicking the hidden buttons, and while this is usually very accurate, I did find this particular pad needed a little more force at times to register my selections.

Most of the time it was very usable though and writing this review on the Spin 513 was a breeze.

When it’s flying, the 513 can whip through various duties with aplomb, but on several occasions, I encountered slowdowns, stutters and even had the computer suddenly reboot itself when I was flicking between Chrome tabs.

None of these were during particularly testing activities, such as gaming, which makes me wonder if the new Qualcomm chips have a few teething errors to work out.

The 4GB of RAM should be enough to deal with ChromeOS, but I did get the distinct feeling that 6- or even 8GB would have been a better choice. This is one of the trade-offs if you can’t afford a high-end model.

Chromebooks don’t really do onboard storage, so the 64GB drive is par for the course in this area, but a microSD slot like on the Spin 713 would have been a welcome inclusion.

Putting the Spin 513 through its paces in our standard benchmark tests returned scores of 53.64 on Jetstream 2, 307 on Basemark 3.0, and on the Android app Geekbench 5 it recorded 533 single-core and 1564 multi-core scores.

These speeds are crushed by the Spin 713, but are comparable to the Lenovo Ideapad 3 Chromebook that I reviewed recently, which also features a plastic casing and a similar price tag.

The use of the Snapdragon 7c means that LTE connections are technically an option, but to have that feature you’ll need the dedicated LTE version of the Spin 513, which at the time of writing isn’t available.

Look out for that if data on the go will be useful. Otherwise, it’s standard fare, with Wi-Fi 5 and Bluetooth 5.0.

Webcams are a little more important than they used to be, with many of us still working from home and requiring hours of Zoom calls to stay in touch with friends, family and colleagues. The optics in the Spin 513 perform fine for this task, with very respectable results in well-lit areas.

Microphones also perform well, so you’ll be able to get your voice heard the next time the family meet-up online.

With the focus on mobility, at least in terms of the lovely weight of the 513, it’s very good news then that the svelte frame houses a battery capable of surviving for 12 hours and 15 minutes in our continuous HD YouTube streaming test.

With the brightness at 60% and volume and 50%, the 513 quite happily kept chugging for easily enough time to get a full day’s work done and still have time to surf the web afterwards.

If you’re not constantly watching YouTube and don’t need to whack up the brightness when outside, then I’m confident the 513 can go even longer, which is very impressive.

ChromeOS is a solid and easy to use system, as it’s essentially the same as the Chrome browser, with that added benefit of a file system, offline apps and no need for antivirus or antimalware subscriptions.

The ability to also run Android apps greatly improved the offering a few years ago, making it a great system for kids who want to do their homework, older relatives that want to keep things simple and just anyone that needs the basics from a computer.

For a more in-depth look at the pros and cons of moving to ChromeOS, read can you use a Chromebook as your only laptop? And My 10-year journey with ChromeOS.

You can buy the Acer Spin 513 direct from the manufacturers for £399 in the UK, but it wasn’t available on the US site at the time of writing. Hopefully this will be rectified by the time you read this review, but Acer did confirm to me that the price will be US$399.

It’s also available from Amazon UK for £397.61, but again there’s no listing for American customers.

This places the Spin 513 around £200 cheaper than the Acer Spin 713 that recently topped our best Chromebook chart and around the same price as the Lenovo IdeaPad 3 Chromebook.

If you want an even cheaper model that still delivers the goods, then the Acer 314 Chromebook is also well worth your time and is currently available for £259.99 on Amazon UK and $232.43 on Amazon USA.

The lightweight and excellent battery life make the Spin 513 a great companion if you’re going to be travelling for work or just plan to be away from power sources for extended periods.

The only real drawback in that respect is the small internal storage and lack of microSD card slot that could be home for lots of Netflix downloads or your music library. But you will soon be able to buy a model with LTE connectivity.

In general day-to-day activities, the Chromebook is a solid unit, but the glitches I experienced are a little concerning. Hopefully, these were just software related issues that will be patched in a future update.

Otherwise, the Spin 513 is a good, cheap laptop for those who want a ChromeOS laptop that can also double as a tablet for occasional tasks.