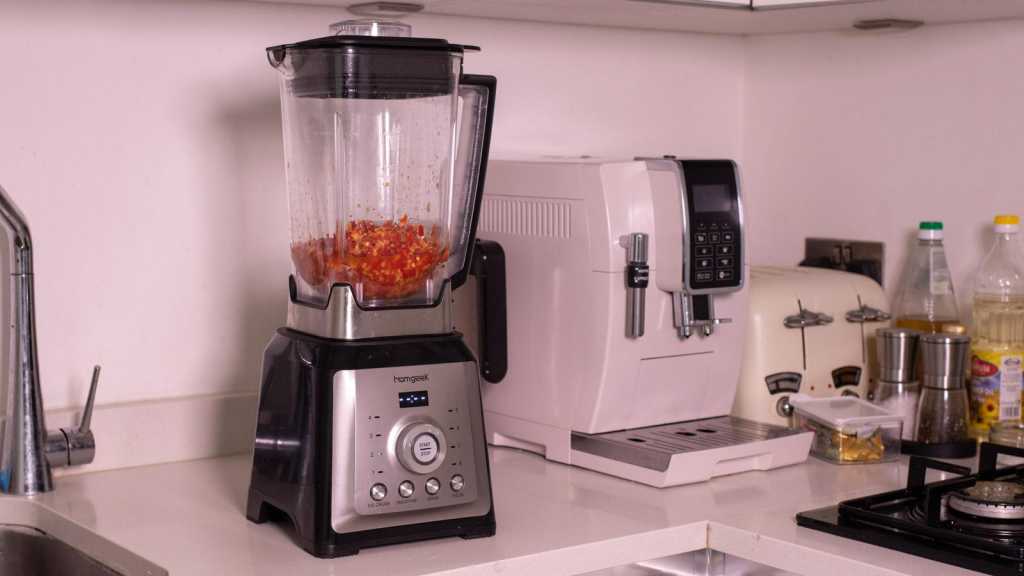 The Homgeek 2000W blender is overkill for most people, but it’s powerful, sturdy, safe, and simple to use and clean, which are the most important factors in any appliance. Just make sure you really need it, as weaker blenders are both cheaper and more compact.

Homgeek’s 2000W blender is the sort of blender you buy three hours deep into a nostalgia-fuelled ‘Will It Blend?’ marathon.

The downside to that is that it’s big, bulky, and heavy. If you only want to make a single-portion smoothie once in a blue moon then this is almost certainly overkill. But if you’ve got the space, and know you’ll make use of it, then this is a great buy.

Like I said, this thing is big. Standing on the base it’s 55cm tall – so more than half a metre – and it weighs almost 5kg, most of which comes from the incredibly dense base. 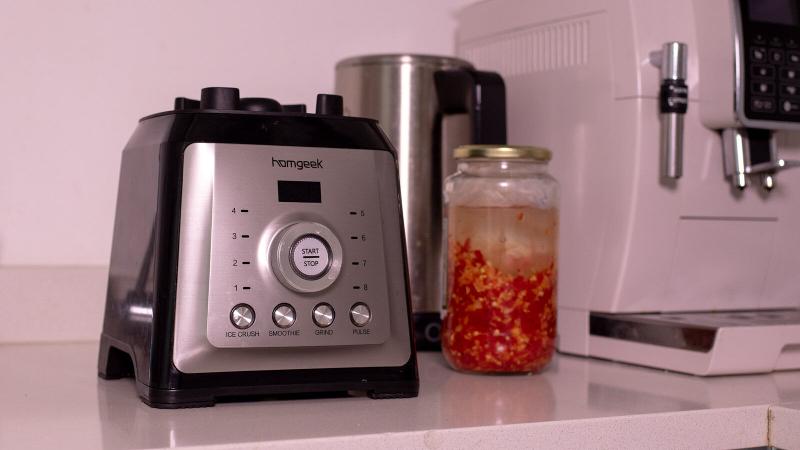 It’s heavy enough that you won’t want to be moving it about too often if you can avoid it, but large enough that unless you have an especially spacious kitchen you might not have the room to keep it out on the work surface – a bit of a catch 22.

The weight does come with one advantage, which is that the blender feels sturdy and secure even when in use, and you’d really struggle to knock it over. The jug doesn’t lock onto the base, but it’s designed such that it can only slot on in one spot, and sits there pretty snugly once it’s in place. Cleverly the base only powers on once the jug is in the right spot, so you’ll know when you’ve got everything set up right.

Controls there are simple. At the centre is a dial that rotates between the eight available speeds, with Start/Stop buttons built into the knob. Below that you’ll find four buttons for custom settings (Ice Crush, Smoothie, Grind, and Pulse), and above a small LED display that just shows how long you’ve been blending for in case you want to time it. 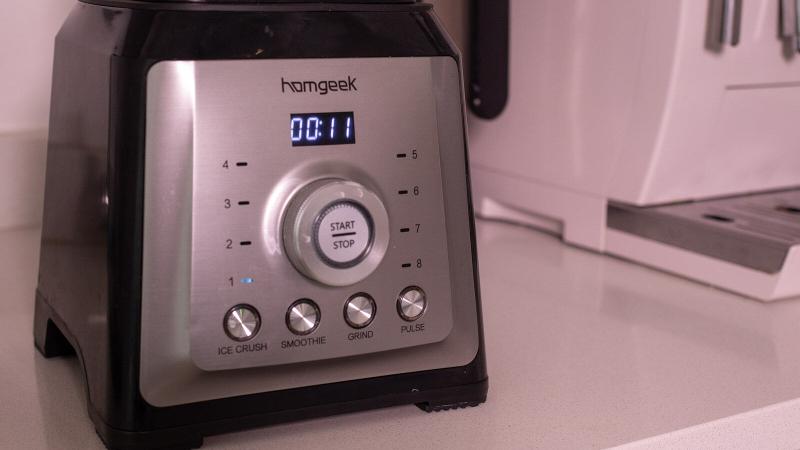 The base is built mostly out of tough plastic, with a stainless steel front panel – so all very solid, and easy to wipe clean. The jug is made out of a BPA-free plastic called Tritan along with eight of what Homgeek calls ‘aviation-grade’ German stainless steel blades.

The jug is just as easy to wipe clean, and conveniently is also dishwasher-safe in case you’re struggling with the hard-to-reach spots in and amongst the blades. There’s also a removable plastic lid to the jug, with a smaller central section that pops up if you need to quickly add any ingredients while blending, along with a tamper (think: big black plastic stick) to help mix thicker blends.

So long as the sheer size of the thing isn’t an issue for you and your kitchen, there’s really little to complain about when it comes to the Homgeek blender’s design.

With 2000W of rated power, this is at the extreme end of what you’d consider a consumer blender – you’d be just as likely to find one inside a commercial kitchen or cocktail bar. 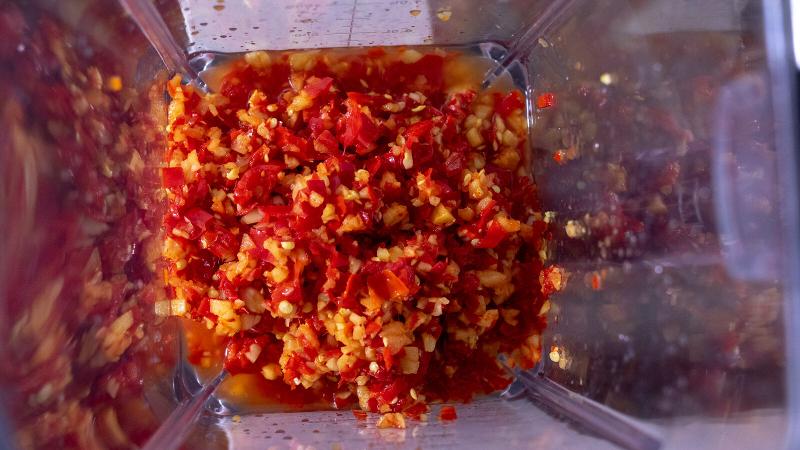 At the upper power settings this is quite comfortable grinding through ice or nuts, making it as good an option for crushed ice cocktails or nut butters as it is for the standard smoothies and soups.

There are dedicated settings for crushing ice or grinding nuts, but most of the time I found it easier to simply use the regular power dial, which gives you the flexibility to increase or decrease blending speed on the fly.

The 2l capacity means this is capable of blending huge batches of soup or smoothie at once, though bear in mind that for thicker blends you won’t want to use the full capacity at once, or it won’t have enough power to keep everything moving . Unless you want to make 2 litres of peanut butter in one go, that probably won’t be a problem though. 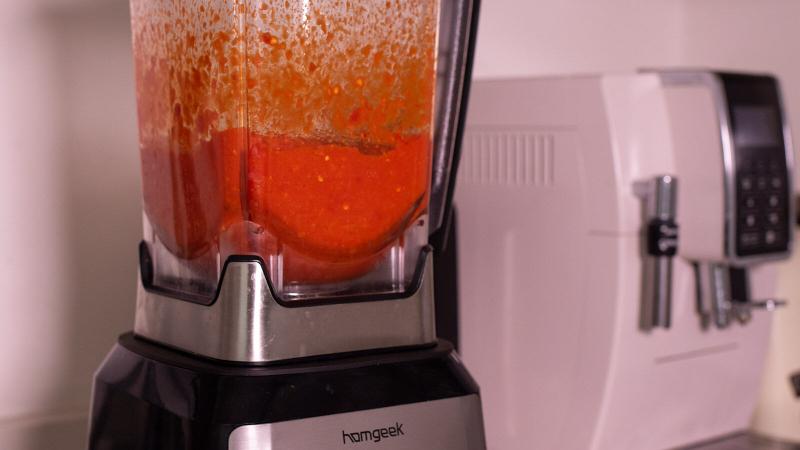 If you run the blender hot enough for long enough it does generate a slightly concerning plasticky odour. Homgeek warns users to expect this on first use, but I found it’s persisted long after that, especially when running the blender at maximum power, which suggests that some bit of the plastic is getting hot. I don’t think this would affect food safety at all, but it is the only thing that gives me pause when it comes to the longevity of the appliance.

That might sound like a lot for a blender, but there are few others on the market with so much power or such a large jug. If you don’t need to blend in large batches, or don’t expect to use it on tougher ingredients like ice or nuts, then you can save money on smaller, less powerful models from Homgeek or other manufacturers. If you think you’ll take advantage of all the extra oomph though, then this is a competitive price for what you’re getting. 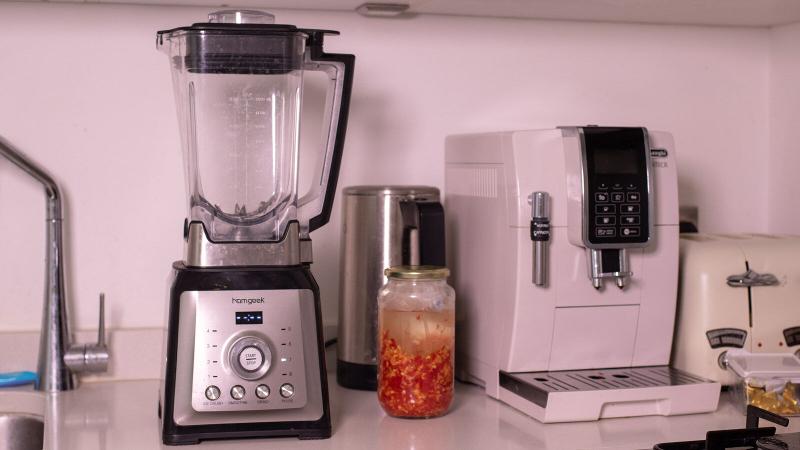 If you’re still not sure, check out our guide to which type of blender to buy for more advice on what’s out there.

The Homgeek 2000W blender is overkill for most people: you probably just don’t need a two-litre jug, or 2000W of power, unless you’re batch-blending smoothies or making nut butters on the regular.

If that is you though – or if you simply want the extra headroom just in case – then the Homgeek is a great option. You’ll have to deal with the size and heft of the thing, but once it gets going this gets the job done.

It’s powerful, sturdy, safe, and simple to use and clean, which are the most important factors in any appliance. Just make sure you really need it, as weaker blenders are much cheaper.