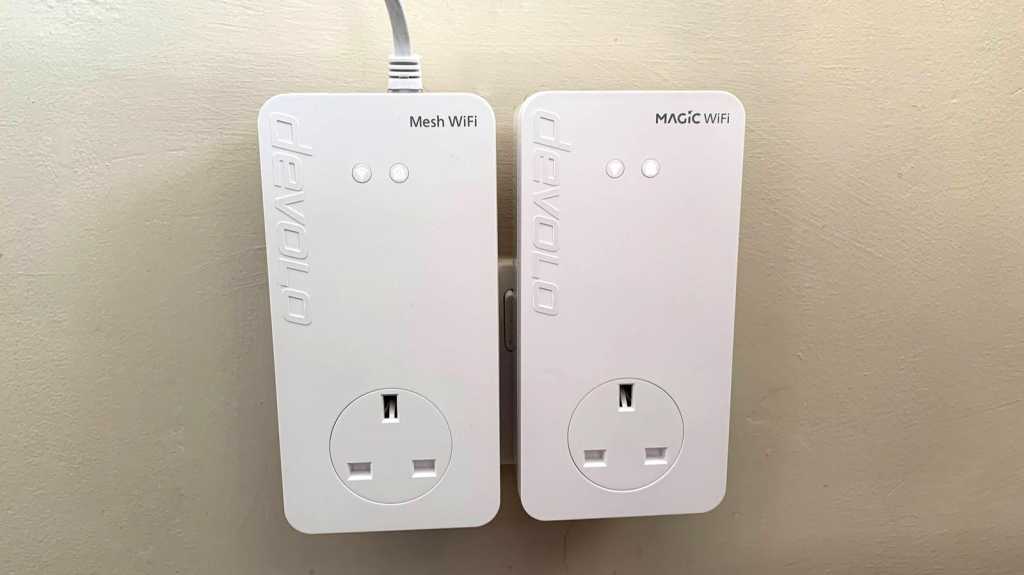 Mesh Wi-Fi is a godsend for larger homes. In smaller places a single-router setup might work fine, but even the best router can only provide limited coverage, especially if it must get that signal through multiple walls and ceilings.

Most mesh Wi-Fi systems communicate over Wi-Fi, so you might find you’re still limited in how far apart you can place the nodes (that’s the proper name for each of the units in the kits).

So if you live in a large home or one with especially thick walls or lots of metal in its construction, you might find that even a Wi-Fi-based mesh system doesn’t offer good coverage or speeds.

The solution is to connect the nodes with Ethernet cables so that they can be placed exactly where you want a strong Wi-Fi signal. The problem is that it’s impractical to do this in many homes, and some mesh kits don’t allow the nodes to use Ethernet anyway.

It comprises three nodes, each of which are identical. They use second-gen G.hn chips which support speeds of up to 2400Mbps over standard mains wiring. They’re not compatible with older HomePlugAV adapters, but that’s the only disadvantage.

The nodes can be placed up to 500m apart, which is perfect if you have an outbuilding where you want Wi-Fi but simply used within your main home, it means you should get great Wi-Fi speeds wherever you plug in the adapters.

They support dual-band 802.11ac (Wi-Fi 5, up to 1200Mbps), and have a pair of Gigabit Ethernet ports for connecting network devices that don’t have Wi-Fi.

Devolo calls it a tri-band system because of the powerline element.

Installation is very easy. You connect one of the adapters to your existing broadband router using an Ethernet cable and plug it into a nearby mains socket.

For initial setup, it’s best to plug the second adapter in next to the first, or have both plugged into a power strip so they can pair.

You can either use the Devolo Home Network app or manual pairing as described in the manual. Once the powerline LEDs are solid white, pairing is complete and you can unplug the second adapter and place it in the room where you want Wi-Fi.

Then, it’s a case of repeating the process with the third adapter in the box.

Ideally, you should disable your existing router’s Wi-Fi to prevent it from competing with the Mesh WiFi 2’s network, and also to stop your devices from connecting to the old network.

Devolo also says you should aim to plug the adapters into single sockets to avoid interference from other mains devices and not to plug them into power strips. Instead, plug the power strip into the passthrough socket on the adapter itself.

Coming from a powerline, not a Wi-Fi background, Devolo’s apps are very different to what other mesh manufacturers provide.

In particular, each adapter has its own settings so rather than apply settings globally to the system, you apply them to an adapter and they are then replicated to the other adapters.

The result is the same, but for a mesh network, it feels strange. To find the settings, then, you have to tap on an adapter from the Network Overview page, tap the menu icon, then you’ll see the four categories: Wi-Fi, Powerline, LAN and System.

Under Wi-Fi you can enable a guest network, schedule when the Wi-Fi is on and off, enable parental controls and see a list of neighbouring Wi-Fi networks, the channel they’re using and their relative signal strength. It’s also possible to set different SSIDs for the 2.4- and 5GHz bands, but doing so somewhat defeats the point of having a mesh system where devices connect to the best node using the band which gives the best performance.

Parental controls are very basic, and require you to enter the device’s MAC address. And when I say enter, I mean actually type it in: there isn’t even an option to select from the list of connected devices.  It’s an inconvenient way to handle this, and all you can do is set a total time limit or an ‘interval’, which is the times between which that device can access Wi-Fi.

If you want to set multiple intervals, you’ll have to create multiple rules for the same MAC address.

None of the Powerline settings are ones to mess with, and there are no real LAN options to speak of.

Under System, you can see the status of the adapter, including the individual temperatures of the PLC and Wi-Fi chips (which do run very warm!). It’s also possible to disable the buttons and turn off the LEDs

The only global setting is the name and password of the network, but this is only present in the Home Network app, not the Cockpit utility that you can use on Windows.

If you have lots of Wi-Fi devices, it makes sense to copy the network name and password from your router so that devices connect automatically and you don’t have to change each one manually.

By default each node has a unique name (devolo-500, devolo-028 and so on). You can rename these to reflect their locations in your home, but in my experience the adapters regularly ‘forgot’ their new names and reverted to their defaults.

What you can see easily in the apps is the powerline connection speed between adapters. This is useful as, if it’s a lot lower than others, you can move an adapter to a different socket to see if it improves. You can also disconnect other electrical equipment from the mains to see if it’s affecting the connection speed.

These speeds vary all the time, and I saw everything from 50Mbps up to around 1000Mbps. The 2400Mbps figure is theoretical, so don’t expect to see that in the apps.

Devolo sells two versions of the kit: a two-adapter Starter package and a three-node Multiroom one.

Each adapter can cover up to 90m² in ideal conditions. If your home is over around 250m², you can buy additional devolo Magic 2 WiFi adapters which are identical to the Mesh adapters except for the branding.

As mentioned, performance varies over the powerline portion of the system all the time, so this can have an effect on Wi-Fi speed.

Testing at 1m from the adapter connected to my BT router, I recorded a maximum of 865Mbps and an average of 623Mbps.

Moving to the kitchen, approximately 7m from the nearest adapter, I saw average speeds of 225Mbps. Testing again in the utility room with an extra wall in the way saw this drop to 75Mbps, and adding yet another wall and testing from immediately outside the house meant a further drop to 5Mbps.

Your results may be different, and you can plug adapters in where you need the strongest Wi-Fi. I found that plugging an adapter into a room adjacent to the garden, then standing around 10m from the house, speeds varied between 20 and 40Mbps.

Again, depending on the layout of your home and garden, you might still get a usable signal 15m / 45 feet away.

I found that there was a bit of a delay (around a minute) before my test phone – a Huawei P30 Pro – would switch from a weak signal to a faraway adapter to a stronger one from a nearby adapter. Devolo says the adapters will help devices to ‘steer’ to the best adapter but it’s mostly down to the device itself to choose which one to use.

Ultimately, in my home, I found that the Multiroom kit struggled to provide a strong signal in all corners of the house even with optimal placement. Being a bungalow, this meant covering a larger ground floor area than a two- or even three-storey house.

Adding a fourth adapter mostly solved the issue, but it does make the system rather expensive.

The two-adapter starter kit costs £199.99; the three-node Multiroom kit £299.99. You can buy them direct from Devolo, but they’re also available from Amazon where you’ll save a few pounds.

They’re not yet available in the US, either from Devolo or Amazon.

This compares reasonably well with high-end tri-band systems from Linksys, Netgear and Google, but those all offer better apps with a handful of more useful features than Devolo’s system.

If you know that your home’s construction makes it hard to Wi-Fi signals to pass from room to room, the Mesh WiFi 2 kit could be the answer. It’s certainly not a cheap solution and if you can easily run Ethernet cables between the nodes of a less expensive mesh system it could work out cheaper overall.