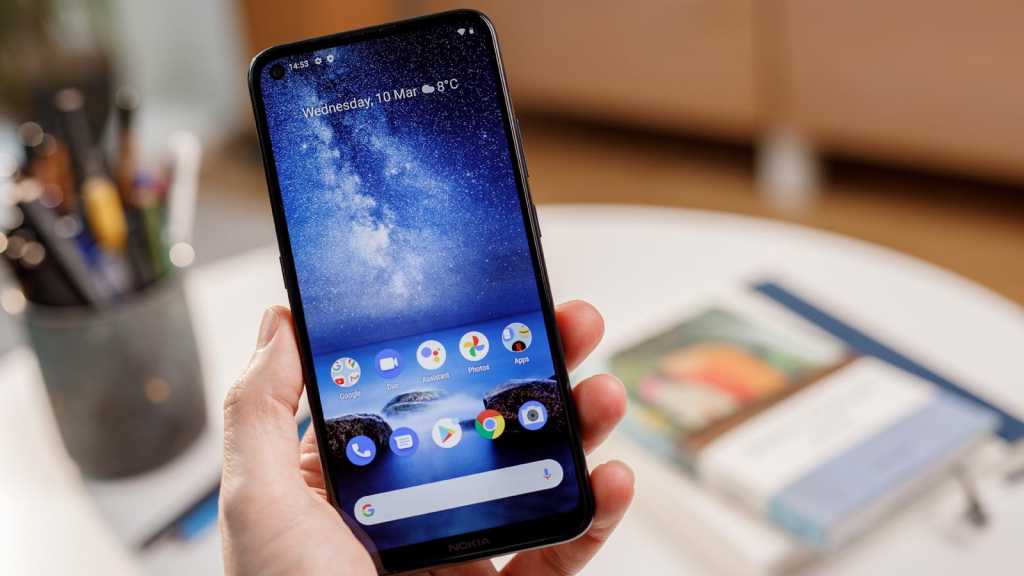 The Nokia 5.4 looks great on the surface, but compared to its predecessor and much of the budget competition, it’s a hard sell.

Nokia is taking on the titans of the budget smartphone market with the Nokia 5.4, a competitively priced smartphone offering a premium look and decent camera performance. However, it’s not as good a deal as it might seem, with the Nokia 5.4 offering a downgrade in several departments compared to its predecessor, and it’s slightly more expensive this time too.

With such a competitive market, does the Nokia 5.4 offer enough to tempt users away from popular budget options like the Realme 7? While there are undoubtedly more powerful budget options available, Nokia has something most can’t offer: a stock version of Android, with an OS upgrade or two in future.

In terms of general look and feel, you might be hard-pressed to find differences between the Nokia 5.4 and its predecessor, the Nokia 5.3. It sports the same understated look with a curved plastic rear that shimmers nicely when it catches the light and even the circular camera housing on the rear, although it comes in two new flavours this time around – Polar Night and Dusk.

You’ll find a fingerprint scanner sat just below the centrally-placed camera housing on the rear, a USB-C port on the bottom for charging and connectivity and, for those that are clinging onto wired headphones for dear life, there’s a 3.5mm headphone jack available too – just like the Nokia 5.3.

By all intents and purposes, it’s a stylish-looking phone, especially for the budget market, with the curved rear helping the phone sit comfortably in the hand, but the fully-plastic body means it feels a little on the cheap side – it even creaks a little if you squeeze it.

But while there are undoubtedly similarities in design, the two smartphones aren’t identical in the display department. In fact, the Nokia 5.4 sports a smaller display than its predecessor, with the 19.5:9 IPS LCD display measuring in at 6.39in, down from 6.55in, and the waterdrop notch has been replaced with a hole-punch camera this time around too.

Given our complaints about the Nokia 5.3’s combination of a large display and HD (720 x 1600) resolution resulting in a noticeably soft-looking display, it’s a smart move for Nokia to try and reduce screen size in a bid to increase pixel density, but I’d have liked to have seen an increase in resolution – especially with much of the competition sporting something close to FHD.

But despite this, a slightly reduced resolution (720 x 1560) means the pixel density is near-identical to that of its predecessor, meaning the same complaints are present this time around too. Text isn’t quite as sharp as it could be, images look a little soft and it’s the same story when watching video too.

It might not be immediately noticeable if you’re not used to high res displays, but it could be a dealbreaker if you intend on watching a lot of YouTube videos or playing games.

The display is also capped at 60Hz, whereas the likes of the Realme 7 sport an increased 90Hz refresh rate for a smoother mobile experience. The saving grace is brightness; with a maximum brightness of 461cd/m2, it’s not the worst smartphone to use in direct sunlight.

Interestingly, it seems the Nokia 5.4 could actually be a downgrade in the performance department compared to last year’s Nokia 5.3 – on paper, anyway.

While the 5.3 offered Qualcomm’s Snapdragon 665, the updated Nokia 5.4 features the Snapdragon 662, along with 4GB of RAM and 64GB of storage depending on the variant you opt for. There’s a variant with more storage and RAM on offer, offering a 6GB/128GB combo, but it doesn’t look like it’s coming to the UK.

In real-world use, day-to-day performance is fine, with apps opening quickly enough and no noticeable lag, and the Adreno 610 GPU is powerful enough for light gaming, but don’t expect to run AAA games at 60fps with high-res textures. That’s reflected in our benchmarks too, with the Nokia 5.4’s performance in-line with other budget options like the Xiaomi Redmi 9.

Of course, with the Snapdragon 662, it’s not quite as performant in the CPU department as last year’s Nokia 5.3 – although, admittedly, it’s not that far behind. Whether that’s a dealbreaker will largely be down to what you’ll want to be doing on the smartphone, but it is a little disappointing to see when the budget market is so competitive in 2021.

While there has been a notable downgrade in many areas of the Nokia 5.4, one area that has seen an upgrade is the camera department. On the rear of the smartphone you’ll find a main 64Mp snapper, a notable upgrade from the 13Mp main sensor of last year’s model, and that’s flanked by a 5Mp ultrawide, a 2Mp macro and a 2Mp depth sensor, all identical to its predecessor.

As you might expect, images captured on the main 64Mp snapper are well-lit and detailed with fairly accurate colour reproduction, thanks in part to the pixel-binning tech utilised, and the low-light performance is decent thanks to the f/1.8 aperture and a dedicated night mode. It’ll, of course, not be able to compete with flagship snappers, but you’ll likely be pleasantly surprised by the shots produced by the main camera.

The issue is that last year’s main snapper was also great – it was the secondary lenses that let the experience down overall, and it’s a similar story with the Nokia 5.4.

The 5Mp ultra-wide camera, even in the best lighting conditions, can’t quite match up to the colours produced by the main snapper. In fact, in tests, the colours in some shots were wildly different to those taken by the main sensor, either looking too vibrant or too washed out much of the time. Camera tuning aside, there is decent detail to be found in well-lit conditions, although images do become softer and noisier as the light levels are reduced.

The 2Mp macro lens is likely an afterthought included only to bump up the camera count and make the Nokia 5.4 a more enticing option on paper – it’s a tactic used by most budget phone manufacturers – and the hit-and-miss performance reflects this. Aside from being a niche lens you’ll likely only use once or twice, it struggles to find and maintain focus.

Flip the phone over and you’ll find an upgraded 16Mp selfie snapper, up from the 8Mp camera of last year’s model. It’s ideal for selfie-taking and video chats, with images further improved by the built-in portrait mode, intelligently blurring the background with decent edge detection.

One area where the Nokia 5.4 shines is in the battery department, sporting a large 4,000mAh battery that, when combined with the relatively low-res display, has the potential to last up to two days on a single charge. I never quite made it to the two-day mark during testing, with a combination of texting, tweeting, taking photos and playing the occasional game, but I did manage to remain untethered for more than a day before the phone needed a top-up.

The downside to the large battery is that there isn’t any fast-charge technology available here, meaning it’ll take quite some time to charge the Nokia 5.4 using the supplied 10W charger. In tests, the Nokia 5.4 only managed to regain 31% charge in 30 minutes, so be prepared to wait well over 90 minutes for it to completely recharge.

While it’s hard to ignore that there are budget smartphones that beat the Nokia 5.4 in terms of spec, Nokia separates itself from the competition by offering stock Android 10 out of the box. That’s a refreshing change compared to the likes of Realme and Xiaomi offering their own spin on Android, and there’s usually a bunch of bloatware that comes pre-installed too.

As well as offering a cleaner out-of-box experience, the Nokia 5.4 is a part of the Android One range, offering monthly security updates for three years, and there should be an upgrade to Android 11 – and even Android 12 – at some point in the future.

That’s impressive for any Android smartphone, let alone one at such a cheap price point.

The Nokia 5.4 costs £159.99 in the UK, and while that is well within the budget category, it’s worth noting that it’s £10 more than the Nokia 5.3 last year despite the smaller display, added thickness and slightly less powerful processor, making it a tough sell – especially when you compare it to the likes of the 90Hz-enabled Realme 7, which you can pick up for as little as £149.99 right now.

It’s more expensive in the US at $249.99, but with less competition in the budget market, it could be a more tempting option.

You do get the benefits of Android One, and the stock Android 10 is certainly a plus unmatched by the likes of Realme and Xiaomi, so if that’s a sticking point, you can pick up the Nokia 5.4 from Amazon in the UK and Nokia in the US.

The Nokia 5.4, overall, is a bit of a swing and a miss compared to its predecessor, let alone the budget market, with the likes of the Realme 7 and Xiaomi Redmi 9 offering a similar level performance with much better displays and, arguably, a better overall look and feel too.

The only saving grace compared to the competition is in the software department: while other budget phones tend to ship with custom versions of Android, and even some bloatware, the same can’t be said of the Nokia 5.4. It runs a clean version of Android 10, with a promised upgrade to Android 11 and even Android 12 at some point in future.