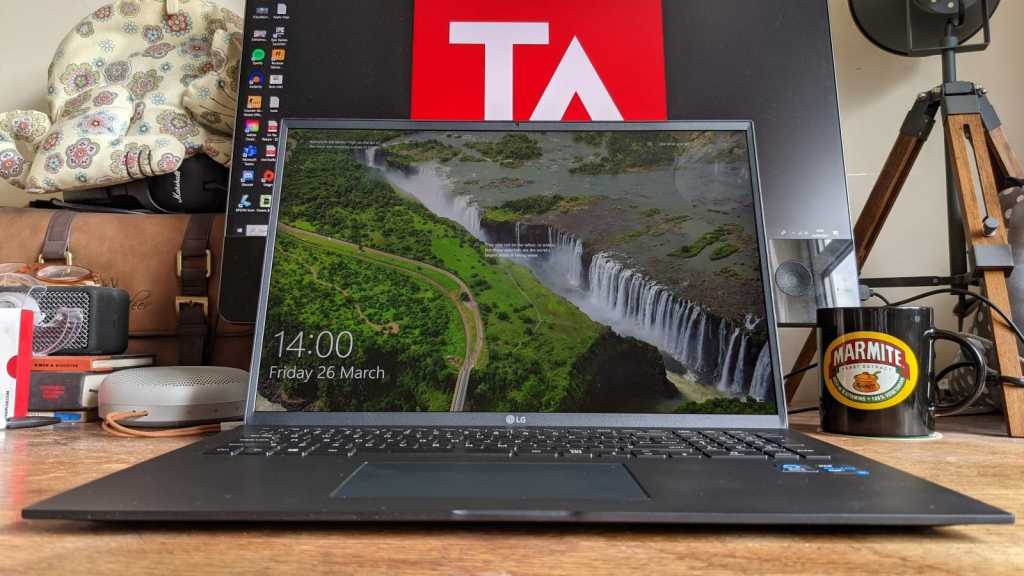 LG has improved the two main complaints we had about the previous gram 17 meaning the 2021 model gains full marks. It’s the most well-balanced 17in laptop on the market right now.

For the last few years LG has been quietly making decent laptops and refining them with each model. Last year the gram series really started to hit its stride and we’re even more impressed with the 2021 models including the new gram 17.

Granted, there’s not as much competition in the 17in laptop market but LG has even introduced a 16in model which my colleague Lewis found to be top-notch in his review going as far as saying it would be the laptop he would buy right now.

There’s wasn’t really much LG could make better about the  2020 gram 17 with my main complaints being poor speakers and a wobbly trackpad. Well, those are certainly better and there are upgrades elsewhere to things like the screen, performance and battery life.

The gram line hasn’t really changed much over the years when it comes to look and feel but this 2021 model (the 17Z90P) has a new design.

While, it’s still recognisable as a gram laptop, LG has sort of smartened things up as if it’s given the laptop a tailored suit rather than one from off the rail from a department store.

I really like this new matte Obsidian Black colour (there’s also a Quartz Silver) and even the slightly more square shape of the overall design. You won’t see it much but even the back has a tweaked design with a sort of butterfly shape when closed.

The main feature here is still simply how light this laptop is. At just 1.35kg, it’s lighter than a lot of 16- or even 15in laptops. For comparison, the latest Dell XPS 17 comes in at a hefty 2.5kg which isn’t far off being double the weight.

To achieve this, you still get a quite flexible chassis (still made from a magnesium-alloy) so the gram 17 isn’t the best choice if you need your laptop to take a few knocks. It has passed the MIL-STD-810 military grade durability test but it still feels more flimsy than rivals.

Bezels around the screen remain small, but not as impressive as some laptops you can get. Still, they aren’t very noticeable, and the HD webcam remains above the screen which is far better than having it below or in the keyboard.

The ports have has a bit of a reshuffle and mostly for the good. There are now two USB-C ports (Thunderbolt 4 to boot – for up to 8K displays and 40Gbps speeds) and LG is using this for charging now instead of a traditional barrel charger. However, they are both on the left so it would be handy to have one on each side.

Things haven’t changed much in this area with an almost identical keyboard to the 2020 gram 17. The main difference this year is that the keys are slightly more square to match the laptop frame and the alternative fuctions to keys are not in a different colour.

That makes things look cleaner and classier but does mean your eye can’t spot the icons as easily.

At this size, you get a full numpad to the side of the main keyboard and a full row of function buttons at the top. Once again, the power button has a fingerprint scanner embedded to use with Windows Hello and I’ve found it very reliable.

Important keys are generally a good size with LG making them bigger last year. It’s really just the arrow keys that are a little too small but that’s hardly uncommon on laptops.

Once you’re used to where everything is the typing experience is good. There’s a decent amount of travel – now 1.6mm rather than 1.5mm – but the action is still a little spongy and soft so some users may prefer something stiffer and crisper like the XPS 17.

The trackpad is much improved and is no longer wobbly which was a big problem before. Now it’s solid and responsive with a nice smooth surface and has a satisfying click. It also has good palm rejection which is needed considering the slightly larger size and placement.

A nice aesthetic change is that its aspect ratio matches the screen.

It’s perhaps the success of the gram 17 that has led LG to change the entire range to 16:10 instead of some smaller models having 16:9.

It might not sound like a big difference but having a slightly taller, squarer screen creates more room for documents, web browsing and various other tasks. And doesn’t dramatically make things worse for streaming TV shows or films.

The screen is the same IPS LCD panel here with a WQXGA (2560 x 1600) resolution and while it’s not touch sensitive, the performance is very good indeed beyond crispness and viewing angles.

I measured various aspects with a SpyderX colorimeter and the gram 17 has a solid maximum brightness of 406 nit (marginally higher than its predecessor). It also offers excellent colour reproduction with 100% of both sRBG and P3, then an impressive 89% of the Adobe RBG colour space.

This makes it suitable for design work such as photo and video editing.

Speakers are often a weak area of laptops but the LG gram 17 has always had particularly weedy ones and last year’s chassis vibrated if you pushed the volume high. Now there are 33% more powerful drivers at 2W each and LG offers a “Max 5W Smart Amp for realistic audio and sound effects. Plus, DTS:X Ultra provides more immersive 3D Audio Rendering with or without headphones.”

Something has worked here as they sound a lot better, especially for music which has more power and clarity than before. It’s still nothing amazing and I still had to have the gram 17 at 100% for a Zoom call with friends but it’s certainly a step up.

At 16GB of RAM and 1TB of NVMe SSD storage, the LG gram 17 matches last year’s model – at the top-end which I’ve tested here. Although, the memory is a little faster at 4266MHz.

It’s another great combination of specs that you’ll often pay a lot more for elsewhere. There’s no dedicated graphics card here but there’s Intel Iris Xe Graphics and the gram 17 for 2021 has the Intel Evo stamp of approval.

Gaining this badge means the laptop has to deliver on various elements such as performance, battery life and connectivity. It’s essentially a modern version of the Ultrabook but you can read more in our What is Intel Evo? explainer.

The LG gram 17 can’t keep up with the XPS 17 in benchmarks with it’s H-series 10th-gen chip and Nividia RTX 2060 graphics, or the MacBook Air’s M1 chip either but the XPS is a bigger beast and a lot more expensive. The Apple is a different type of laptop I’m including for performance context.

Back in the Windows market and LG performs extremely well and I’ve found that to be the case in the real-world, too. The gram 17 is an excellent workhorse for a range of office tasks and you will be able to use it for a bit of gaming if you’re not playing anything overly demanding.

Other specs include Bluetooth 5.1, Wi-Fi 6 and I found the laptop very quiet and cool in testing and during benchmarks.

This is an area where LG has been strong in the past but things are even better with the gram 17 for 2021. The battery is still 80Wh but the upgrade to more efficient 11th-gen Intel chips provides a decent boost in battery.

Using it for a days work is more demanding, of course, but in my experience, the laptop can comfortably last eight hours with a mix of tasks. For me, that’s writing, web browsing, a 30-minute video call and photo editing – while listening to music. All with the screen set to 80% brightness.

Using the supplied USB-C charger, the laptop can reach 34% in our usual 30-minute window.

We don’t normally talk about software in laptop reviews since you know what you’re getting with Windows. However, LG has added some things you should be aware of.

A window advertising the inclusion of Alexa will appear (as well as a sticker by the keyboard), which might seem odd considering Microsoft has Cortana as its digital assistant. Whatever the reason for Alexa, it will be a welcome sight for regular users.

On the not so positive side are regular pop-ups from McAffee LiveSafe trying to get you to spend money. Luckily, if you’re not keen you can go into the setting and quickly uninstall the program.

The LG Control Center is more useful providing a range of different settings you are often unable to adjust such as USB-C charging for other devices while the laptop is off and the colour temperature of the display.

You can also adjust the cooling mode if you like as well as limiting the battery to 80% when it charges to extend the lifetime of the battery.

You can get selected models from Currys PC World, Ebuyer, Argos and AO but you’re actually better off buying directly from LG or Amazon. These stores have the entry-level and middle models reduced to £1,149 and £1,299 respectively.

In the US, there only appears to be the top-end model I tested at $1,799 available from Amazon or the LG site.

Check out our round-up of the  best laptops to see what other options you have.

With its new design and upgraded components, LG has really perfected the 17in laptop in the 2021 gram 17.

The only real issues I had last year were the wobbly trackpad and weedy speakers and both of those are much improved this time around. The keyboard may be a little spongy for some and the webcam is HD but that’s a nitpick followed by something that’s totally normal in the industry.

The Dell XPS 17 is a key rival and might appeal to some with its RTX 2060 graphics card and 4K screen, but it’s a lot heavier and more expensive.

However, the LG gram 17 provides a much better balance of price, design, performance and specs.

This thing is still just 1.35kg and the bump to 11th-gen Intel processors not only means smooth performance but increased battery life, now at over 20 hours for video playback.

There are more things to like with two Thunderbolt 4 ports and still two USB-A ports along with HDMI and microSD. That’s a great range of ports and the laptop has Wi-Fi 6, too.

All of this and prices are reasonable, too, making the LG gram 17 another winner.