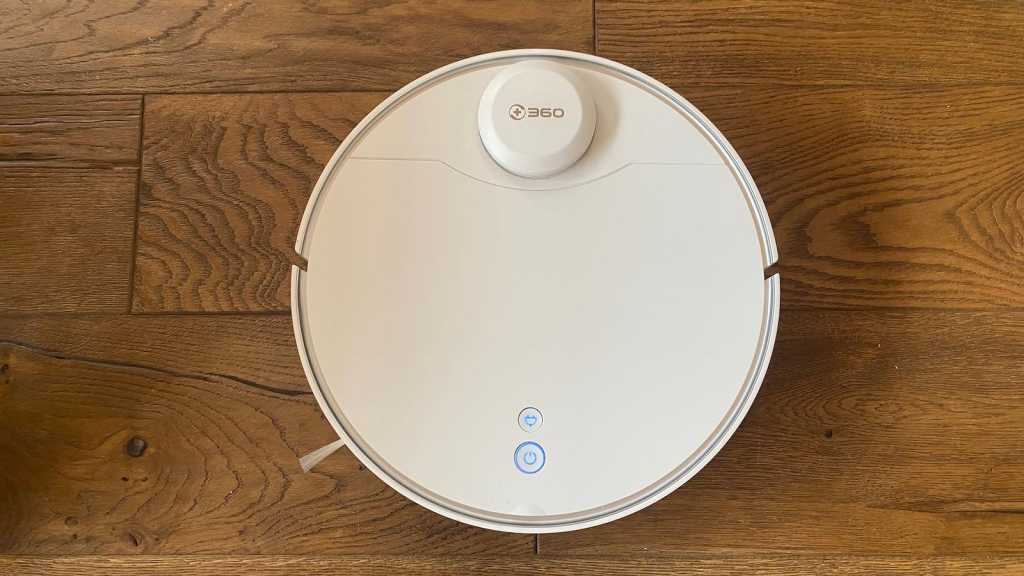 The S9 is a well priced robot vacuum cleaner, with excellent navigation and suction power. Its app gives you plenty of options for scheduling and no-go zones but its mop function is gentle at best.

The S9 is a combined vacuum cleaner and mop. But does it wipe the floor with other robot vacuum cleaners? We find out in our full review.

The S9 is traditional in appearance: a chunky white disc with a silver ring and a raised round platform in its centre. When you spot one of these – a Lidar tower – on a robot vacuum, it tends to bode well for the vac’s navigation and mapping capabilities.

Lidar involves the use of a laser, which bounces off objects and gives the robot a much more accurate perception of distance. The S9 uses a mixture of Lidar, sensors and other tech. Its navigation and mapping are excellent.

It comes with a mop attachment (which I’ll come back to) and a remote control, which you can use for a few basic functions, including driving the robot cleaner around to focus on a specific spot or spill. The S9 is also compatible with Google and Alexa home assistants, so you can use voice commands as well.

One of its best features is the dock, which doesn’t come with the usual plastic half moon that has to be placed by the charger for the cleaner to find and slot into. The problem with these is that the cleaner can easily shunt them around once it’s left the dock and, even if not, they become a magnet for dust and hair.

Instead, the 360 docks with a magnetic clip. It’s an attractive, clean and intelligent solution that we would love to see more widely used. 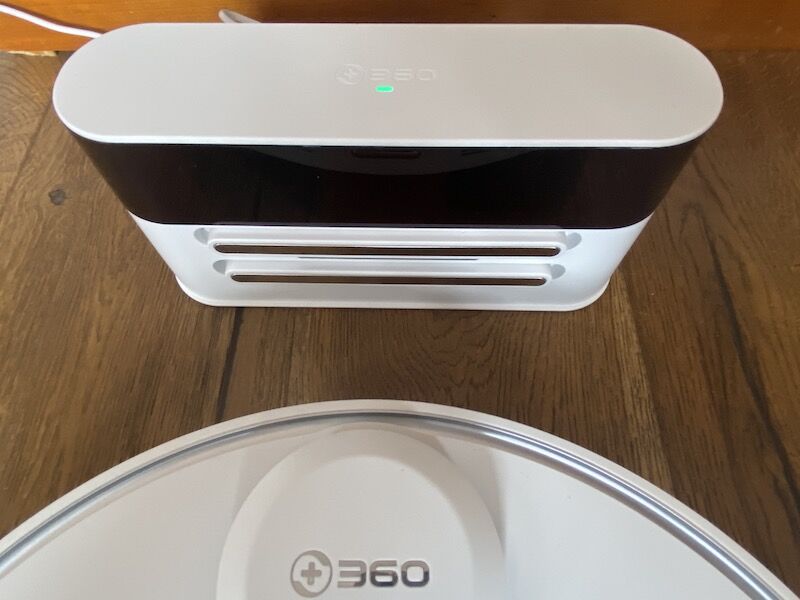 The S9 is 10cm high (Lidar tower included) and 35cm wide. It fit comfortably under the key pieces of furniture in my home but if you want to buy this, or any other robot vacuum, we suggest that you measure the height under your sofa, bed and other large pieces of furniture to find out how much of your home it’ll be able to access and whether it’s likely to get stuck.

The S9 is a good little mover. Unlike some robot vacs, which can get stuck in difficult situations, the S9 can back up when it finds itself trapped.

This makes up for the fact that it’s not the best climber. It uses its ability to reverse to help it manoeuvre over obstacles. One room in my home has a wide, 2cm high lip across the threshold that has beached other robot vacs but, using a combination of shunting back and forth (essentially making a many-more-than-three point turn) the S9 clambered over every time.

This manoeuvrability doesn’t always work in its favour. It had problems hopping over a wire and when another robot vac might pause, the S9 backed out, dragging the wire with it and almost pulling a lamp over as it went. Clearly, it has a powerful motor.

I always leave a few obstacles around while testing, to see how a robot vacuum cleaner reacts. But obviously, before you use one at home, you should tidy away wires and cables – even if it’s advertised that the vac can avoid them.

The S9 has a freakishly exact awareness of its own size. I watched, kind of fascinated, as it trundled between the legs of a chair, became trapped and shunted the chair across the room for a bit (again, that is some motor) then changed its angle fractionally and freed itself.

I’ve tested a lot of robot vacuum cleaners and I’ve never seen one try to get in that space, let alone figure a way out. Most use their collision detector and ricochet away, unperturbed. It’ll be a bit of a mixed blessing if you have cluttered home but it did mean that the S9 got absolutely everywhere and cleaned in corners and small spaces that its competitors had left untouched.

(All of this was with the anti-collision setting on. I tried it in both positions but I couldn’t spot any appreciable difference in the S9’s behaviour.)

On hard flooring, I used it largely on the Quiet mode, yet I found its cleaning ability to be excellent. I think the Max mode would only be necessary if you’d spilt a box of cereal on the floor.

Speaking of quiet, the Quiet mode is just that, at 55dB. The noise level goes up to 67dB on the highest setting, which is fairly loud, but you shouldn’t need to hear that often.

The S9 has a mopping function, which is easy to use. Unusually, the water tank is internal, under the lid, next to the dustbin. This does mean that the bin is fairly small (420ml).

In my case, I needed to empty the bin after an hour of cleaning (covering 31m2), although I have a cat and a dog who are both moulting at the moment and the bin was largely filled with pet fur. 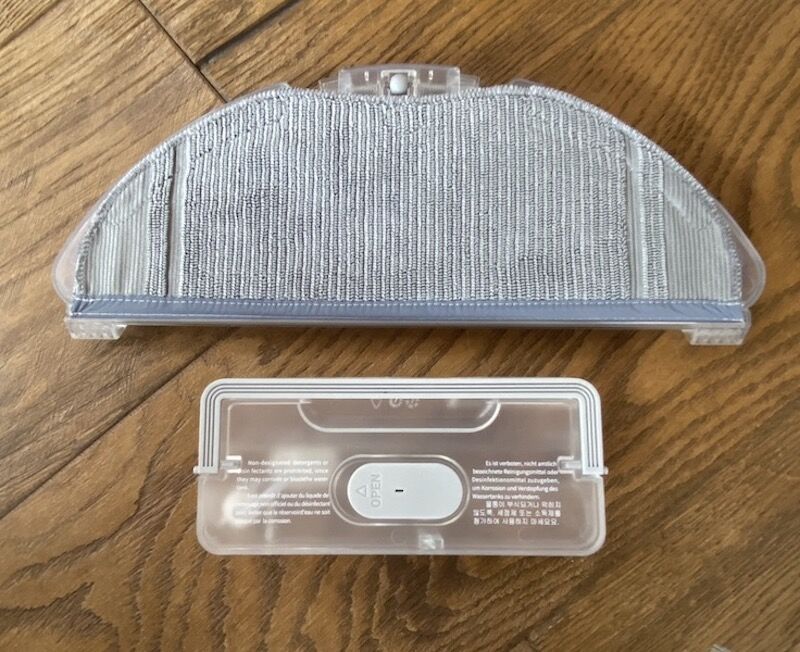 To mop, you fill the 200ml tank, dampen the mop attachment and clip it on. That’s it: you’re good to go. It’s easy to use but only mildly effective.

That said, mop technology on combined robot vacs is generally not advanced enough to be a brilliant alternative to mopping by hand. The S9 does as good a job as most and will lightly mop a floor. But it just can’t exert enough pressure to properly remove a dried-on stain.

According to its makers, the S9 has a battery life of up to three hours. What I can add is that it vacuumed my entire flat, which takes an hour, and only used 20% of its battery life to do so. Mopping may cost it a little more.

Although you can use voice commands (if you have a home assistant) or the remote for basic controls, you’ll need the app for most of the functions. The 360 app is free to download and use and is available for both Apple and Android.

I’ve read about people experiencing connectivity issues with the S9 and app but I had no such problems and found the set-up straightforward.

Once the S9 begins cleaning, it starts to develop a very accurate map of your home. In fact, it can save up to 10 maps (so if you have a ten-storey home, this is the vac for you).

Once you have your map, you can name rooms, add no-go zones, schedule vacuuming and opt for different forms of cleaning (vac, mop or both) in different rooms and at different times. 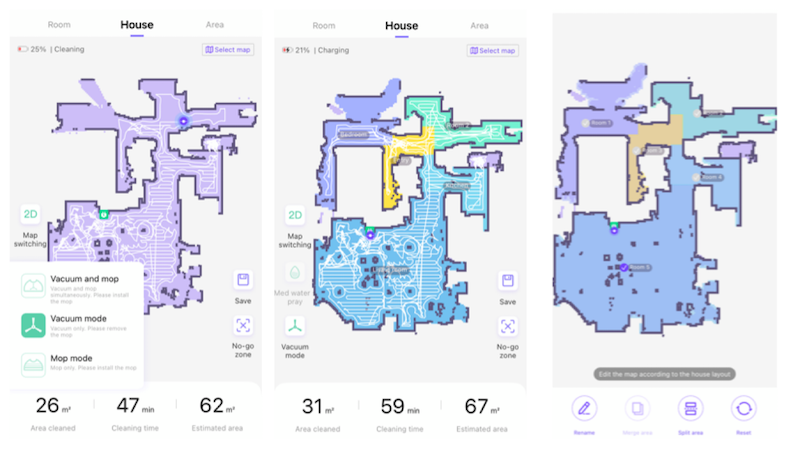 These are great features to have. You can easily add a no-go zone to ensure that the S9 always avoids a corner where there’s a nest of wires, or temporarily stays out of the living room if you have half a Lego set all over the floor.

It also means you can schedule it to vacuum in the kitchen every day after breakfast, or mop the bathroom floor after you shower.

The 360 S9 is available in the UK and the US from Amazon. In the UK, it’s priced at £419.99. Sadly, it’s currently out of stock on Amazon UK, although we expect it to be restocked in the near future. It’s available at an inflated price from an alternative seller but we would suggest waiting.

The S9 is powerful, intelligent and well-priced, with a great mapping system. The mop function is too gentle to represent a serious alternative to mopping by hand but for its price point, this robot vacuum is one of the best.