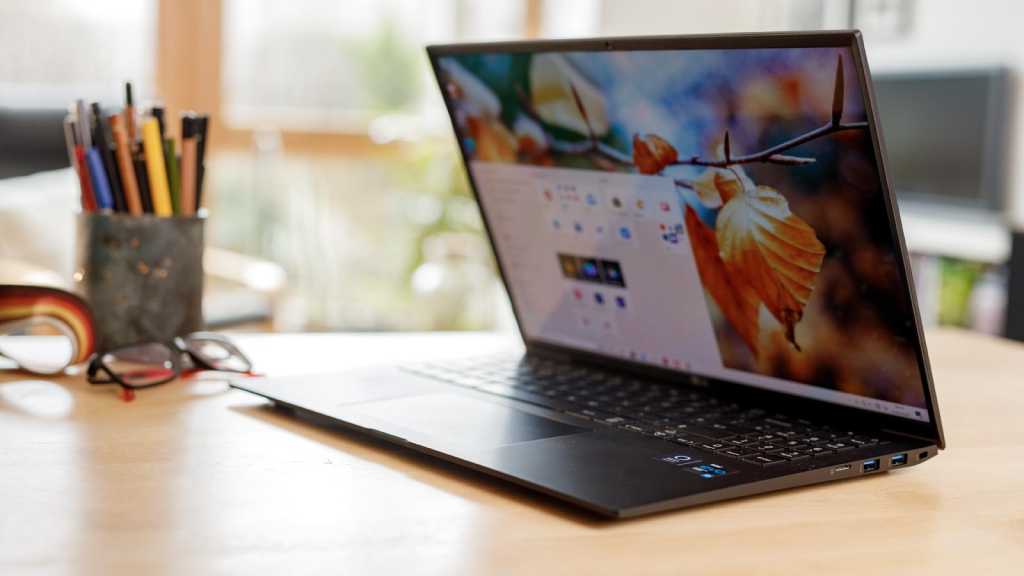 The LG Gram 16 is a stunningly lightweight laptop that doesn’t skimp on performance or battery life, albeit at a premium.

The LG Gram 2021 range is the latest thin-and-light offering from the company, introducing a new 16in model that sits alongside the ultralight 14in and 17in models. Despite the impressive lightweight nature (so impressive that it literally holds a Guinness World Record), the LG Gram 16 offers access to the latest tech in the form of Intel’s 11th-gen mobile processor, Intel Iris Xe integrated graphics, impressive all-day battery life and much more.

While the LG Gram 16 won’t be taking on powerful gaming laptops or desktops anytime soon, if you’re on the market for a powerful ultralight laptop, the Gram 16 could be the ideal choice.

Unlike the 2020 update to the Gram range, the 2021 range features a range of visual improvements along with the usual internal upgrades that these yearly cycles bring. The most obvious feature given the branding is the increased screen size, from 15.6in to 16in, without much in the way of change to its overall footprint, but there’s more to it than that.

One of the first things you’ll notice about the Gram 16 is just how light it is. In fact, at 1190g, the Gram 16 holds the Guinness World Record for the lightest 16in laptop right now – an impressive feat from the LG team. In reality, it’s incredibly lightweight and easy enough to carry one-handed, but that doesn’t translate to poor performance with impressive on offer from this year’s entry. More on that later.

The lightweight nature is in part down to the use of a magnesium alloy for the bulk of the chassis. It may lack the premium finish of aluminium counterparts, but LG has done well with the materials at its disposal, complete with a matte finish to hide the inevitable build-up of finger- and palm prints.

Despite the plastic-y look and feel, the Gram 16 is a durable bit of kit designed to withstand shock, pressure, dust, vibration and salt fog, boasting MIL-STD-810G certification. The Gram 16, then, should certainly survive the occasional knock when on its travels.

The hinge has been redesigned in an attempt to conceal as much of the mechanism as possible, and the bezels surrounding the 16in display have shrunk from 15.9mm to 11.2mm, which combined help give the Gram a revitalised look. It’s also available in a new Obsidian Black alongside the standard Quartz Silver, with the black option – which we’ve been sent for review – looking particularly sleek and snazzy.

Hidden within the slim bezel is a tiny webcam, but despite the increased reliance on video calls during the past year, LG included the same disappointing 720p webcam. It’ll do, but those looking for high-quality video chats may have to invest in a dedicated webcam.

The backlit keyboard has also had an upgrade this year, with the combination of larger and flatter keycaps and a comfortable 1.6mm key travel providing a much-improved typing experience with little to no adjustment period like with the Razer Blade Pro. Each keypress feels bouncy and although it’s not mechanical, there’s satisfying feedback as you type.

There’s a full numpad to the right of the keyboard, as well as a suite of media controls that run along the top and a power button with a built-in fingerprint scanner sat on the top right.

Though the trackpad was already larger than much of the competition, LG has increased the size by 11% this time around, with a taller 16:10 aspect ratio to match the display. While some trackpads can be a little finicky, I’ve not found that to be the case with the Gram 16, offering both touch and tap support and great responsiveness, although a mouse would still be preferred if working at a desk.

There’s also a big change in the port department, with this year’s Gram range ditching the dedicated power port for the more universally accepted USB-C. You’ll find two Thunderbolt 4 ports on offer, and unlike other companies that cut back on other ports with the inclusion of USB-C, there are still two USB-A 3.2 ports, a microSD card reader, a headphone jack and even an HDMI port running along the sides of the 16.8mm thick laptop.

As you should expect from an LG laptop, the display is absolutely stunning.

The Gram 16 sports a 16in IPS LCD panel that’s stunningly bright and detailed, with visuals so life-like you’ll want to reach out and touch them – but don’t, because like previous Grams, there isn’t touchscreen support here. It’s not the biggest disappointment as it means the display should stay fingerprint-free, but would be a nice feature to have on a laptop at a premium price point.

Lack of touch aside, the combination of a WQXGA (2560 x 1600) resolution and the taller 16:10 aspect ratio – both new to the Gram 16 – allow you to fit more on the screen than competing 16in 16:9 models, making the Gram 16 a great machine for split-screen multitasking.

In our benchmark tests, the Gram 16 scored 100% accuracy when it comes to sRGB and DCI-P3 colour spaces, but a lower AdobeRGB score of 77% means creative professionals may want to calibrate it before using it for work. Also, with a maximum brightness of 310cd/m2, it’s not the brightest screen I’ve ever seen, but that’s not too noticeable in everyday use.

Overall, it’s an exceptional display for browsing the internet and most forms of work, and you certainly won’t have any complaints using it to binge the latest series on Disney+.

There’s a big jump in performance on offer from this year’s LG Gram range, offering Intel Evo platform certification. For the unitiated, Evo-certified laptops have to meet certain criteria regarding performance, battery life and design, including a 1ms wake time, machine learning-powered CPU and GPU control, fast charging tech and much more, as part of the certification, offering the best laptop experience possible from the hardware on offer.

The headline feature is of course the upgrade from the 10th to 11th-generation Intel processor, sporting the 2.8GHz Intel Core i7-1165G7 and improved Intel Iris Xe graphics alongside 16GB of DDR4X 4266MHz RAM (which LG claims is 33% faster than the 3200MHz offering from last year) and up to 1TB of SSD storage.

Interestingly, there is a second NVMe bay that you can use to upgrade the storage at a later date, but the company confirmed that doing so would invalidate the warranty – it recommends taking it to an official LG stockist for upgrades, but if you’re confident in your abilities, the option is there.

Without getting buried too deep in benchmark results, it’s safe to say that the performance on offer from the LG Gram 16 is impressive, keeping in-line with much of the ultralight competition in benchmark tests. It can handle light creative work with ease, and believe it or not, you can actually play games like Fortnite and CS:GO and get stable 30fps performance.

It won’t replace high-end gaming laptops anytime soon, but it’s great to see on such a lightweight laptop.

For more on performance, take a look at our benchmark results below, and keep in mind that the Gram 16 is lighter than all other laptops mentioned too:

For more on the benchmark process, take a look at how we benchmark laptops.

On the audio front, LG claims that the hidden DTS:X Ultra 2W speakers have been upgraded to offer “3D Audio Rendering even without wearing headphones” and while the speakers are fine, there’s nothing standout about the 3D performance that I’ve noticed during my Netflix binge sessions.

When it comes to connectivity, you should expect the latest and greatest Wi-Fi 6 Gig+, which offers a 3x jump in download speeds compared to Wi-Fi 5 on compatible routers according to Intel, as well as Bluetooth 5.1.

The laptop runs the latest version of Windows 10 Home, and also offers integration with Amazon Alexa, allowing you to access Amazon’s virtual assistant and control your smart home tech completely hands-free once set up.

Despite the lightweight nature of the Gram 16, one of the core pillars of the Intel Evo platform is great battery life, and that’s certainly on offer here. LG claims that the Gram 16 can last a whopping 22 hours on a single charge, and although our benchmark result of 18 hours and 14 minutes running a looped 720p video didn’t last quite that long, the 80Wh battery can comfortably get you through a day’s work.

Plus, the USB-C power delivery means it can accept chargers as powerful as 65W for a rapid charging experience, with the included 65W USB-C PD providing 35% of charge in half an hour.

It is a pricy option when compared to options from the likes of Huawei, but it’s worth pointing out that none can quite match the lightweight nature of the Gram series, especially with the level of performance on offer.

If you are interested, you can pick up all configurations of LG Gram 16 from Amazon in the UK and the US. But, if you’re unsure if this is the laptop for you, take a look at how it compares to the competition in our selection of the best laptops.

The LG Gram 16 is a gorgeous laptop boasting an incredibly lightweight form factor that doesn’t compromise on performance, offering great benchmark results compared to the ultralight competition and great battery life too. Minor design changes, like the shift to a 16:10 display aspect ratio and an improved keyboard, help enhance the overall experience on offer too.

It might not have premium features like a touchscreen or facial unlocking capabilities, but if you’re looking for a powerful lightweight laptop, the LG Gram 16 is the way to go.