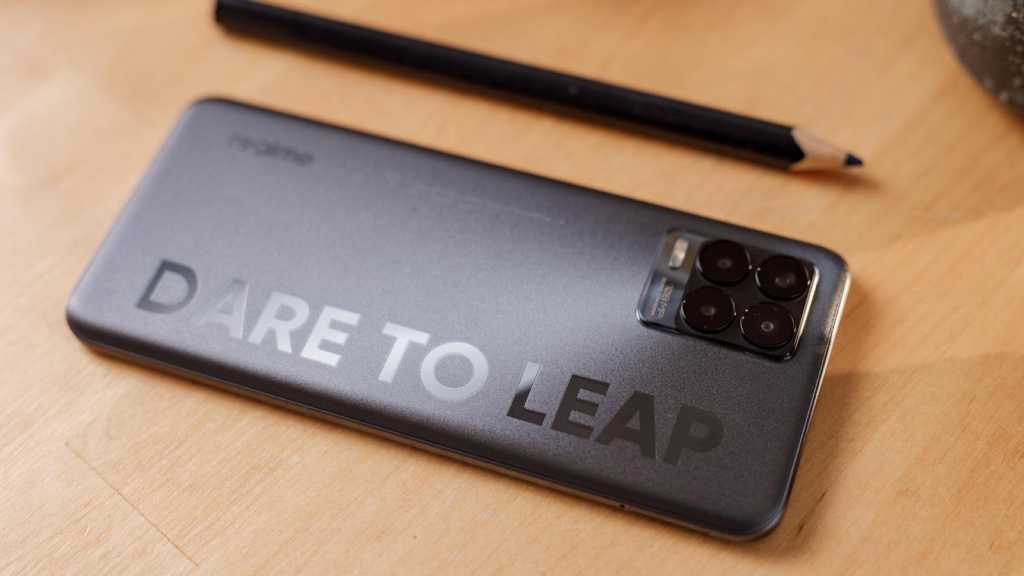 The Realme 8 Pro’s strengths lie in its impressive lead camera, thin and lightweight design, rapid fast charging and value for money, however, Xiaomi’s Redmi Note 10 Pro equals or outguns it in multiple areas

While Realme has carved a niche out for itself as one of the most eligible affordable smartphone makers in the world right now, nobody has ever recommended one if its devices because of their cameras first and foremost.

The snappers on Realme phones aren’t inherently bad but they’re uneventful and have lagged behind some fierce competition, particularly in the mid-range market where the company places the majority of its energy. The Realme 8 Pro is its attempt to address this shortcoming by focusing its efforts on camera quality first and foremost.

At a glance, Realme has taken last year’s Realme 7 Pro but chopped-and-changed some key elements in order to accommodate the 8 Pro’s headline 108Mp primary camera, does that make this a true successor, though?

On first impressions, you’ll likely notice just how thin and light the Realme 8 Pro looks and feels. This is primarily made possible by a plastic-backed design, but it’s a pleasing trait nonetheless.

What may be more divisive about the back panel is Realme’s decision to run its ‘Dare to Leap’ tagine across the length of the phone. This is a design trait that, for the most part, has only really featured on the company’s releases inside of China, so it’s appearance here on an international model could signal a shift for future devices.

While this won’t bother everyone, if you’re someone who looks for a clean design in their smartphones, the 8 Pro might not suit your tastes; especially as despite including a case in-box for added protection, its smoky transparent finish means the slogan remains visible regardless.

There’s a notable stepped ridge between the frame running the phone’s edge the front and back of the device, that helps with grip at the expense of elegance, while the new squared rear camera arrangement feels distinct and imposing, especially considering the hardware it features.

Despite the textured plastic back, the phone feels solidly built, without an ounce of flex and even though it boasts that thin profile, Realme was able to include a 3.5mm headphone jack along the bottom edge too.

The bezel around the phone’s display suffers from a sizeable chin within the confines of the bezels, but the lightly rounded edges of the cover glass make swiping in from the sides that little bit more comfortable, in spite of the aforementioned ridge.

The screen itself is a 6.4in 20:9 Full HD+ AMOLED panel that delivers on detail, contrast and viewing angles but could benefit from improved brightness (despite a promised 1000nits peak brightness).

A 180Hz touch response rate spells good things for gamers but it’s at odds with the 60Hz refresh rate, which despite being perfectly serviceable, lags behind a select few similarly-priced competitors, meaning visuals and interactions just aren’t as smooth as I’d have liked.

Realme continues to deliver on the customisation and personalisation of the viewing experience on its devices, with blue light filtration and a scheduled eye comfort shield, always-on display functionality – which makes particular sense on an AMOLED-toting device like the 8 Pro – as well as a simple three-option colour mode control, that shifts the colour gamut depending on your preferences.

Alongside face unlocking from the hole-punch front-facing camera in the top left corner of the phone’s display, there’s also an in-display fingerprint sensor. Realme describes its placement as ‘natural’ but it feels about an inch too low, relative to the natural placement of a thumb on-screen. It’s also unreliable, proving fast when it works but inconsistent too.

As for the audio side of things, the 3.5mm headphone jack is an instant win and an impressive inclusion on a phone with such a thin frame, as already mentioned, while the single down-firing loudspeaker does a decent job of pushing out sound, even if clarity isn’t exactly outstanding. Hi-Res Audio support also features.

The Realme 8 Pro serves as the first of the company’s globally released smartphones to showcase its take on Android 11 in Realme UI 2.

The move to version 2.0 centres around greater personalisation, with options to change up icon style, size and formatting, fingerprint unlock animations, notification shade aesthetics, UI colour schemes and more, all from a dedicated section within the settings menu.

Base Android 11 features like media playback controls for multiple apps within the notifications shade and a system-wide adaptive dark mode also feature.

Other pre-existing benefits, like a dedicated one-handed mode, the Smart Sidebar (for quick access to chosen features and apps), Clone Phone (for easily transferring media and contacts over from your old device) and screen-off gesture shortcuts, to name but a few, all help Realme UI standout without coming across as overwhelming.

One of the big disappointments in the move from the Realme 7 series to the 8 series is that the underlying chipset hasn’t changed, with the Realme 8 and 8 Pro both packing the same respective silicon as last year’s phones, in the MediaTek Helio G95 and the Qualcomm Snapdragon 720G, respectively.

In artificial tests, for a device positioned at the lower end of the mid-range sector the 8 Pro scores well, ranking highly against similarly-specced devices from the likes of Realme, Xiaomi and Vivo. In real-world use, the 8 Pro feels fine while swiping around, but isn’t averse to the odd UI stutter from time to time.

It’s a competent enough gaming device too, for those looking for an inexpensive phone that can still run titles like PUBG Mobile (at medium settings) but don’t expect high fidelity gameplay or consistent frame rates.

In contrast to the middling performance, battery is where the 8 Pro really shines. In testing, the phone managed some of the best longevity out there for a device with a 4500mAh cell and a Full HD+ 60Hz display.

In normal usage, you should be able to expect up to eight hours of screen-on time, meaning two full days of use on a charge for most and best of all, if you do happen to be caught short, the 8 Pro also boasts rapid 50W fast wired charging.

In perhaps one of the strangest shifts (perhaps a cost-saving measure in order to allow for the phone’s 108Mp camera), the Realme 8 Pro actually fast charges more slowly than last year’s 7 Pro, which supported 65W fast charging. Realme still includes a 65W adapter in-box but don’t be mislead by its inclusion.

50W should still be plenty fast for most people’s needs, however, bringing the phone to 82% in 30 minutes flat – more than enough for a day’s worth of use.

The cornerstone of the Realme 8 Pro is its Samsung ISOCELL HM2 108Mp sensor. It’s the first time a Realme phone has pushed past 64Mp and the company is trying to leverage those extra pixels in a number of ways.

While image quality is the obvious reason for choosing a higher-resolution sensor like this (and you do have the option to shoot 108Mp stills if you want to), there are a number of other positives too.

By default, the 8 Pro captures 12Mp nona-binned (condensing the image data of nine pixels on the sensor into one pixel in the final image) stills, which benefit from reduced image shake, noise and grain, as well as better low light performance.

While there’s no optical zoom system in place, Realme has also confidently put forward that the sensor allows for up to 3x zoom photos that are of equivalent quality to optically-zoomed photos of the same magnification.

Existing Realme-exclusive camera features, like Starry Mode, have also been expanded upon, with Starry Mode video letting you capture up to four-hour-long time-lapses of the star-lit night sky and a tilt-shift mode that simulates a narrow depth of field, even on larger subjects.

The long and short of it is that the 108Mp sensor takes the best photos of any Realme phone to date, with a wider dynamic range alongside more accurate colours, contrast and exposure. The results still don’t offer the same level of sharpness that higher-end devices with similarly sizeable camera sensors deliver (which applies to its 3x zoom shots too) but it’s a step in the right direction.

The improved Night Mode works well enough but doesn’t seem that drastically different to the original iteration Realme developed, based on the results, while portrait shooting seems a little heavy-handed when it comes to the artificial bokeh it lays on shots by default; not to mention the edge detection algorithm still need a little work.

When shooting video, what really impresses is the EIS (electronic image stabilisation) that the 8 Pro possesses. Even the lowest setting should prove competent enough for most but you have varying levels of stability that you can dial up when shooting in particularly rough terrain if needs be.

The rest of the 8 Pro’s camera sensors mirror that of the standard model, with an 8Mp 119° ultrawide sensor, a 2Mp macro sensor and a 2Mp monochrome depth sensor on the back, while the hole-punch snapper clocks in at 16Mp in resolution.

The ultrawide hits the mark with regards to colour consistency, with even flagship phones like the new OnePlus 9 Pro misstepping in this area; based on the discoveries made by Dom Preston during his review.

The macro, meanwhile, shouldn’t be written off like the supplementary sensors on Realme phones usually are. While 2Mp’s isn’t really usable outside of social media, the results are actually crisper, with better colours, contrast and dynamic range than expected. It’s a niche use-case that needn’t be there, but at least its inclusion isn’t completely useless on the 8 Pro.

The Realme 8 Pro was announced alongside the standard Realme 8 on 24 March, hitting pre-order in markets including the UK on the same day. The phone is available to buy as of 31 March, priced at £279, available from both Realme directly and Amazon UK.

Related: Where to buy the Realme 8 Pro in the UK

Those already familiar with Realme’s recent releases may notice that the 8 Pro hits an identical price point to that of the Realme 7 Pro and the Realme 7 5G. While the only reason to opt for its predecessor would be to benefit from marginally faster charging (which isn’t enough of a reason, based on what else the 8 Pro adds to the equation), you’ll be waiting a little longer for an affordable 5G-capable 8 series entry, meaning the 7 5G may still be worth considering if you can’t hold off.

The Realme 8 Pro is a device seemingly centred around raising the profile of the company’s camera credentials. Based on the rest of the spec sheet, it’s a reworking of last year’s Realme 7 Pro with a thinner, more lightweight build, slower charging and the same underlying components – save for that all-important camera.

In practice, it achieves its intended purpose and happens to be a well-balanced affordable mid-ranger in the process, with a killer feature that sets itself apart from the rest of Realme’s lineup. Just as Xiaomi is a keen rival of Oppo in the wider mobile market, however, so too is the company’s Redmi line against Realme in the mid-range and affordable spaces.

The price/camera performance proposition of the Realme 8 Pro is undeniably strong but Xiaomi’s Redmi Note 10 Pro just pipped it to the post, hitting the market only a few weeks earlier. It totes a superior processor, higher refresh rate AMOLED display and the same Samsung-supplied 108Mp camera sensor, all for the same price as the Realme.

Provided you can live with Xiaomi’s less approachable MIUI user experience (compared to Realme UI), the Redmi looks to be better value for money. Otherwise, the Realme 7 Pro will still satisfy your needs and be easier to use in the process.