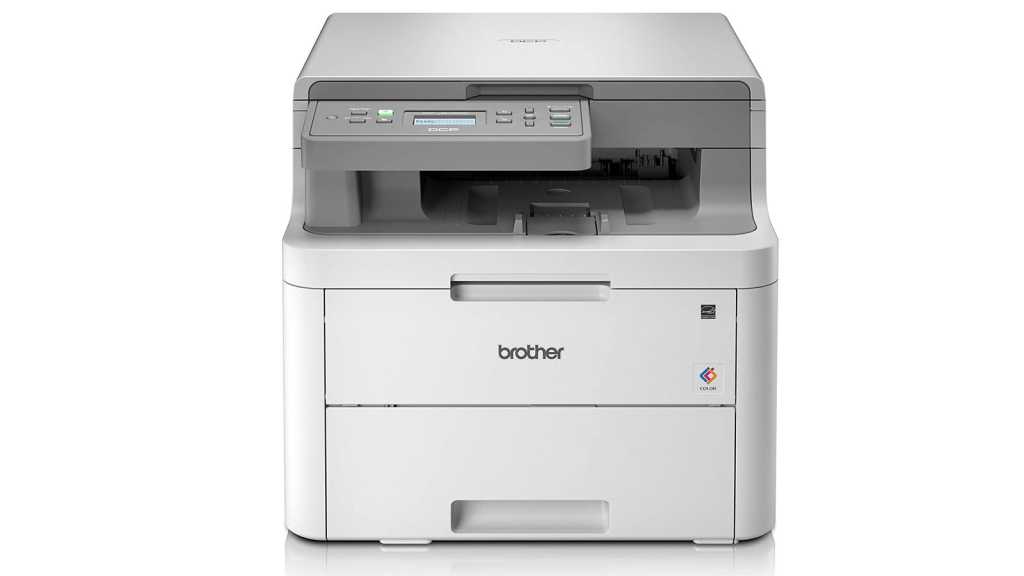 A capable printer for home office use, but one that’s not particularly cheap to run unless you use third-party compatible cartridges.

Colour laser printers are a revelation if you’re coming from an inkjet printer. Reliable print quality, speed and the fact that prints emerge completely dry are three reasons you’ll probably never go back.

These days they’re relatively affordable, though not nearly as cheap to buy as a multi-function inkjet. You’ll also be disappointed if you need to print photos or – in the DCP-L3510cdw’s case – require precise colour accuracy, but as long as these two things aren’t dealbreakers, a colour laser is a wise choice.

I say laser, but this is actually an LED printer which uses an array of LEDs to create the image to print instead of scanning laser. Since the two technologies are so similar, and because it’s confusing, even Brother calls them LED laser printers.

The DCP-L3510cdw is an entry-level model, with one clue as to its position in the range being the 2-line matrix LCD display rather than the colour screen you’ll find on more expensive models. There’s no auto document feeder either, which is a shame as it makes it very annoying and time-consuming to scan multiple pages – especially if they’re double-sided.

But, it can print on both sides of the paper which saves money and also trees, which is certainly a bonus.

Naturally, there’s Wi-Fi alongside a USB port, and support for AirPrint so you can print easily from an iPhone or iPad. The same is true if you have an Android phone, and if yours doesn’t detect the L3510cdw automatically you can install Brother’s app and use that.

It’s a fairly big unit weighing over 21kg and measuring 410 x 475 x 368 mm (WDH), so isn’t going to tuck away like an inkjet. But it is shipped with toner cartridges that should print about 1000 pages before you need to look at replacing them. Like most modern printers, you’re not in control of when to replace cartridges, so even if print quality looks fine, printing will cease until you install whichever one has ‘run out’.

The paper tray will take 250 sheets and there’s also the option to feed in sheets manually, and both tray and manual feed will take media up to 163g/m2.

Installing the DCP-L3510cdw proved a painful experience on a Windows laptop. The initial download from Brother’s website was 440MB, and in total almost 1GB had to be downloaded to get the drivers and utilities installed.

The whole process to much too long, and the resulting iPrint & scan software was hardly worth the wait. You’ll probably use it mainly for scanning, since there’s no option to scan to USB.

Picking how you want to connect the printer is part of the installation and configuring Wi-Fi is much easier here than attempting to use the printer’s LCD screen and up/down buttons to enter a password.

Several times during testing I found the green Wi-Fi light flashing away to indicate it wasn’t connected, despite a perfectly adequate Wi-Fi signal in the room. (However, after long-term testing, the Wi-Fi connection has been reliable enough, as has wireless printing from laptops and phones.)

With a quoted speed of up to 18 pages per minute (ppm), the L3510cdw is no speed demon. But even at the 16ppm that it managed in testing, it’s quick enough for most home offices, where documents tend to be just a few pages long.

If those document have colour in them, speed drops to around 15ppm, and if you print on both sides, then expect 6-7ppm.

On occasion, though, such as when printing a colour chart from an iPad, there was an inexplicable delay of several minutes while the LCD screen simply showed “Receiving data”. Whether another Wi-Fi issue or something else proved impossible to establish. Basic text documents printed from mobile devices emerged as quickly as if you’d printed them from a laptop.

The scanner does a great job, and only takes a couple of seconds to scan an A4 sheet at 200dpi. If you need higher resolution wait times at a little longer, but even at 200dpi, quality is more than usable. The hinges extend to accommodate textbooks and other thick media.

Order yourself a set of genuine Brother TN243 toners and your bank balance will be £140 lower (they’re not available under this part number in the US and neither is the printer itself).

Compatible sets cost around £50-60 from Amazon and other retailers, and I’ve used a variety of these in the printer with excellent results.

With the official toners, each mono page works out at bang-on 4p and colour pages at 10p, so this is certainly far from the cheapest laser running costs. In my experience, compatible cartridges don’t print the number of pages they claim, but even so, they’ll still work out cheaper.

You can no longer buy a DCP-L3510cdw from Brother’s website where the RRP is listed as £334. But it’s available from Amazon at around £270, as well as Printerbase and Printerland. Brother’s EcoPro subscription scheme used to let you sign up and get the printer for only £1.20.

But (as of July 2022), colour printers (and colour toner) had been removed from the scheme and Brother was offering only mono printers. Its website said it was “working hard behind the scenes to bring you an even better EcoPro subscription”, suggesting colour printers would return soon.

For more, see our separate article on Brother EcoPro. We also recommend other models to buy in our roundup of the best printers.

As long as you don’t need the ultimate in print quality and just need a printer that will easily handle the demands of a home office, printing a mix of mono and colour documents for both work and schoolwork, the DCP-L3510dcw will fit the bill. If you like the idea, but need to scan multi-page documents regularly, go for a model higher in the range with an ADF, such as the L3550cdw.