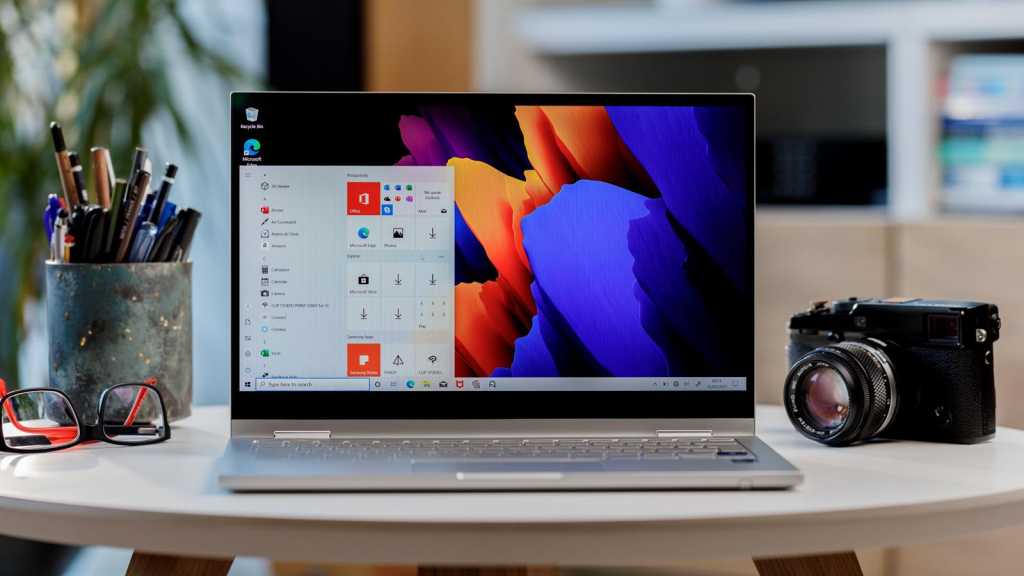 Samsung has refined and tweaked the Galaxy Book Flex experience to become the most complete convertible laptop you can buy. You’ll need deep pockets, though.

Samsung is primarily known for its phones and TVs, but it’s become clear that the company wants to become one of the default laptop manufacturers. A string of 2020 releases included the Galaxy Book Flex, a high-end convertible with built-in S-Pen. Our 9/10 review put it at the top of our best 2-in-1 chart, where it has stayed for many months.

Now, Samsung is back with a second generation, adding Tiger Lake processors, 5G and an extra camera to the mix. This is the same laptop that launched as the Galaxy Book Flex 5G back in September 2020, but it wasn’t until the arrival of the S21 range in January that the device made its way to these shores.

Despite demand for affordable laptops hitting unprecedented levels in the past year, Samsung has opted for the opposite approach. The Galaxy Book Flex 2 is even more expensive than the original, a device that was already out of many people’s budget. At this price point, very few compromises will be tolerated.

The Galaxy Book Flex 2 is undoubtedly a high-end device, but that’s not immediately clear from the design. An aluminium build is pretty typical of modern laptops, but the Royal Silver finish doesn’t scream premium in the same way a MacBook Pro does. I did prefer the standout Royal Blue colour scheme on the original model, but that’s not available here. Still, this minimalist design might not be a bad thing for a £1,649 device that’s likely to be used in public.

The 13.3in display (which we’ll talk about in detail later) is housed within some impressively narrow bezels, although these are unchanged from the regular model. Here, you’ll find the same 720p webcam as last year – it’s fine for occasional video calls but nothing more, and still doesn’t support face unlock. I had hoped that Samsung would prioritise the quality of its webcam this year, although the company has added a second 13Mp snapper above the keyboard. This is designed to be used as a rear camera in tablet mode, and offers far better clarity and dynamic range. I still wouldn’t recommend using this for anything beyond the odd photo for reference, but it would have been nice to see the same quality of sensor used in the webcam.

As with the previous model, the Flex 2 has a 360-degree hinge, allowing it to be used in ‘tent’ mode and as a tablet of sorts. Windows 10 still doesn’t feel optimised for touch input, although the hinge is much stronger and less wobbly than before.

That keyboard I alluded to earlier has had a nice upgrade. It offers significantly more travel and a more convincing typing experience than its predecessor, despite being unchanged aesthetically. The keys are backlit, although there doesn’t appear to be a way to customise the brightness level.

It includes the same fingerprint sensor as before, which remains easy to enrol and near-faultless in its unlocking of the device. However, one minor criticism of the keyboard is that the function keys don’t work with a single tap – you’ll instead have to hold down the ‘Fn’ key at the same time. I couldn’t find a way to turn this off in settings. The trackpad is slightly taller and narrower than the original, but still feels cramped at times. If you plan on using the device long-term, I’d recommend connecting a separate mouse.

Another area which has seen significant changes is ports. While many manufacturers are choosing to remove them in the quest for ultra-thin and light devices, the Flex 2 is proof that you can retain a full range of connectivity options without compromising on a premium design. Samsung has dropped one of the USB-C ports from the original model, but replaced it with a full-size HDMI and USB-A. The latter’s absence was one of the most annoying things about the original Flex, so I’m delighted to see it here. You still get a 3.5mm headphone jack and SIM card tray too, which is now 5G enabled.

It’s clear Samsung wants the Flex 2 to be used for consuming content as well as productivity, making speakers of paramount importance. A continued partnership with AKG meant audio was always going to be a strong point, although there’s a noticeable improvement to bass and clarity here.

The Flex 2’s design prioritises functionality over looks, but the same can’t be said of the display. The 13.3in Full HD OLED (or QLED, as Samsung calls it) touchscreen is a joy to use, offering full support for the sRGB colour gamut. You could be forgiven for expecting higher than the 1920×1080 resolution at this price point, but the rich, vivid viewing experience more than makes up for it. It’s particularly noticeable when watching TV or other multimedia content, where the colours really pop. Samsung allows you to tailor this to your liking with a choice of six presets, but I was more than happy to stick with the default ‘Auto’ setting.

The screen also gets impressively bright – I recorded 426 nits at 100% brightness, while a Samsung-specific ‘Outdoor+’ mode boosts this to an incredible 600 nits. The settings menu warns you that the latter will drain the battery very quickly, but it’s a nice option to call on in direct sunlight.

Samsung has moved the S-Pen to the front of the device (or the top when in tablet mode), but its functionality is largely unchanged. It connects instantly via Bluetooth, offering the same 4096 levels of touch sensitivity that the stylus has become known for. Removing the S-Pen from its slot opens a Galaxy Note-style menu, with options to create notes, capture the screen and create live messages. I typically used it instead of the touchpad at times for a more precise touch and noticed almost no input delay. I still prefer the chunkier S-Pen you’ll find with the Tab S7+, but it’s a real bonus to have such a capable stylus built into the device.

The Flex 2 is powered by Intel’s 11th-gen Tiger Lake processors, with a choice of i5 or i7 chips. I can only comment on the latter, which will cost you £200 more than the base model and wasn’t available on the original Flex. This combines with Intel Iris Xe graphics and up to 16GB of RAM, although the model I tested only has 8.

Still, it offered stellar all-round performance, handling complex web browsing, multitasking and photo editing with ease. The device isn’t pitched as a gaming machine, but I’d be surprised to see it falter in that area.

This strong performance has contributed to the Flex 2’s inclusion in Intel’s Evo Platform, a new category of premium thin and light laptops. To qualify, eligible devices must be running Intel’s latest chips, wake from sleep in less than a second and offer nine hours of usage from a single charge. It also needs to have Thunderbolt 4 and Wi-Fi 6 support, with the Flex 2 ticking all these boxes.

Samsung has also added 5G to its laptop line for the very first time, but the relatively limited rollout of the technology meant I wasn’t able to test this for myself. Still, it does mean the device is well future-proofed, making it a great portable productivity device for many years to come.

One of the key reasons for this is stellar battery life. The Flex 2 comes with the same 69.7Wh battery as its predecessor, but offers significantly more usage from a single charge. To help quantify this, I ran a 720p video loop test with the brightness set to 120 nits, to give an idea of the screen-on time you can expect. I recorded an extremely impressive 19 hours and 44 minutes before the device put itself to sleep. That’s among the highest figures we’ve ever had at Tech Advisor, and a full two hours longer than the original Flex.

However, there are a couple of caveats to be aware of here. Firstly, 120 nits really isn’t that bright – in a well-lit environment you’ll probably want it higher for a comfortable viewing experience. Playing the same video on loop, while useful, is also far from typical of everyday usage. It’s almost certain you won’t get that long before reaching for the charger, but a full work day should be well within reach.

Talking of charging, the Flex 2 comes with a 65W fast charger in the box. It connects via either of the USB-C ports (having one on either side is convenient), and I was able to get 42% charge back in just 30 minutes.

To help maintain battery health, Samsung has also included a ‘Battery life extender +’ feature in Settings. When turned on, the maximum your battery can charge to is 85%, which Samsung says will extend the physical life of the battery. It’s one of a few software tweaks dotted around Windows 10, but none have a big effect on the look and feel of the operating system.

Price is the big thing that counts against the Flex 2. It starts at an eye-watering £1,649 via the Samsung website and Amazon in the UK, with the i7 model I tested coming in at £1,849. The device is not currently available in the US.

While there are some clear upgrades over the original Flex, I was hoping for a price drop in order to make it more competitive. When you consider that many devices in our best laptop chart cost barely half the price of the Flex 2, it becomes much harder to justify.

However, O2 selling the Flex 2 on contract may help soften the blow. Plans start at £45.99 a month with £20 upfront for 1GB of 5G data. That’s still a significant investment, even if you do get AKG Y500 wireless headphones and 6 months’ free Disney+ at no extra cost.

The Flex 2 is arguably the most complete 2-in-1 laptop you can buy, but you’ll pay for the privilege – at least £1,649 to be exact. In exchange, you get a gorgeous 13.3in OLED display, excellent performance and truly outstanding battery life. The new secondary camera adds versatility to the tablet mode, while the addition of a USB-A and full-size HDMI port is much welcomed. You also get Samsung’s signature built-in S-Pen, while the new hinge is far sturdier than last year’s model.

Aside from the rather boring Royal Silver colour scheme and a slightly clunky trackpad, there’s really not much to complain about here. I just wish it wasn’t so expensive – that alone makes the Flex 2 much more difficult to recommend.