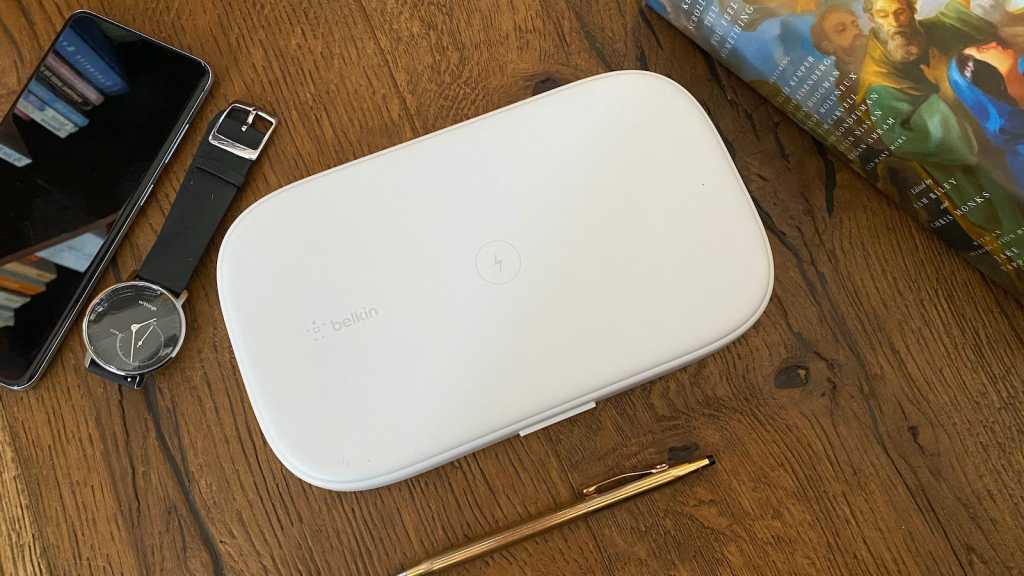 Belkin’s phone sanitiser is efficient, portable – and one of the best-priced on the market. But it has its flaws.

In the post-Covid-19 world, as people are becoming more hygiene conscious, UV sanitisers are becoming a popular piece of tech. To find out more about what they are and how they work, you can  read our guide, which explains everything you’ll need to know.

The short version is that they’re boxes into which you put your phone and other small items that you carry around and touch a lot. The box’s contents are then exposed to UV-C light, which will break down any bacteria and viruses on their surfaces.

Here are our thoughts on Belkin’s sanitising phone charger.

Belkin’s sanitiser looks exactly the way you’d expect it to: it’s a matt white box with rounded corners and rubber feet. It closes via a magnetic attachment. It’s not an ugly device that you’ll want to hide, nor is it a gorgeous bit of tech you’ll be desperate to get your hands on.

It’s about the same size as a paperback novel (3.5 x 20 x 11.5cm) but at 434g, it’s a fair bit heavier. It plugs in at the back and comes with a USB charging cable and 3-pin plug. You could easily stick it in your bag and carry it from home to work if you want to clean your phone whenever you come inside.

The inside of the case is shiny. Some UV sanitisers have a mirrored interior, which helps to bounce the light around and ensure it reaches every side of your phone. The shiny surface may perform a similar function, although it’ll probably be slightly less effective.

When you place your phone inside the Belkin sanitiser it’ll sit on a grid of raised dots that should allow the light to reach its underside. This means you shouldn’t need to flip it to make sure it’s clean all over.

Additionally, the lid of the box functions as a 10 W wireless phone charger. Put your Qi-enabled phone on top and it’ll charge quickly – even through a 3mm case. It’ll also charge Qi-enabled earbuds.

At the front of the device is an On/Off button. Press it once for a short, 3-minute cleaning cycle and twice for the longer, ten-minute clean. According to Belkin, the shorter cycle will kill up to 97% of bacteria on the surface of the phone, and the longer cycle up to 99.99%. But what does this really mean? Is 97% good enough? We don’t know.

This is the point at which we have to say that we can’t verify Belkin’s claims. What we can say is that, in tests, UV-C light has been found to be effective at destroying bacteria and viruses.

What we’d advise is, if you buy a phone sanitiser, you use it as a form of added protection from lurking nasties and continue to wash your hands, clean your phone as you normally would and observe all of the usual pandemic protocols.

The Belkin sanitiser is only recommended for use with non-porous items. It won’t be effective on items like your wallet or a leather watch strap. In any case, this particular sanitiser is really only designed to fit a phone. The interior is too shallow for much else. I could fit in a key, but not my full ring of keys. Pens will fit in, but not sunglasses.

So, put your phone in, press the button and the cleaning process begins. But there’s a slight issue. UV-C light is dangerous to skin and eyes. It’s effective against bacteria because the light breaks down DNA – which means it’s harmful to anything with DNA. That’s why effective UV light cleaners will only switch on when the box that houses them is closed.

When you open the lid of the Belkin sanitiser, however, there’s a short delay before the light switches off, so you may get a flash of light in the eyes. Now, you should stop the cycle before opening the lid – and a triple click of the main button will do just that – but the fact remains that the lid can still be opened before you do.

I noticed it while I was testing the product and contacted Belkin to find out if the unit I received was defective. It isn’t. According to the company, however, the light delay lasts less than a second. They gave me this statement:

“Belkin conducted multiple safety tests to ensure that our product operates within safety standards including a photobiological safety test based on IEC standards in SGS. Our tests additionally determined that the fraction of a second of the delay between raising the lid and UVC LEDs going off would not be harmful due to low exposure. Consumer safety is of the utmost importance to Belkin, so we recommend that consumers do not open the lid while the cycle is running.”

The problem here isn’t that it’s necessarily dangerous, it’s that this is a product designed to give you a bit more control and reassurance in a worrying time. But if it’s swapping one safety worry for another, that’s a bit of a flaw.

Belkin’s Boost Charge UV sanitiser & wireless charger is widely available for £39.99 in the UK. This puts it at the less expensive end of the sanitiser spectrum. You can buy it from Amazon, John Lewis, Currys PC World and Argos.

If you’re keen to get a phone sanitiser, you could do worse than Belkin’s offering – it’s efficient, portable and one of the best priced on the market. The wireless charging is a nice extra as well. But it’s not flawless and it probably wouldn’t be my personal choice.

To see all the sanitisers we recommend and find out how the Belkin measures up, check out our round-up of the best UV sanitisers we’ve tested.