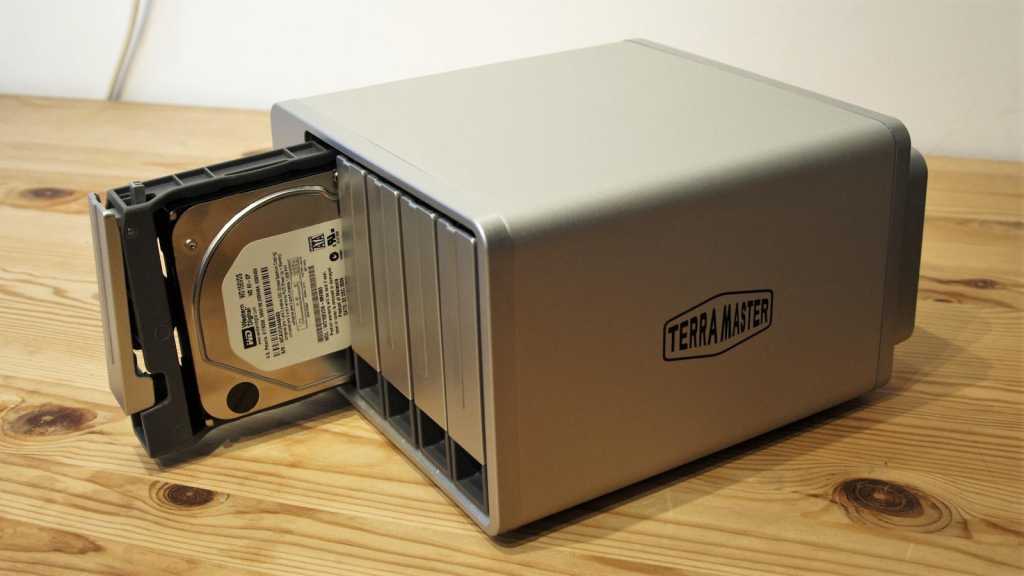 While it costs a good bit more than the F4, the F5-422 offers greater flexibility and the potential to better exploit the 10GbE networking. Half the price of a comparable Synology box, this looks like a bargain to anyone needing a small business NAS with plenty of punch.

Think Synology and QNAP NAS drives are far too expensive? You are not alone, and there are some better ways to spend your cash if you need a cheaper NAS with lots of features. The TerraMaster F5-422 is an excellent example of a widely available design with some hidden potential at a bargain-basement price.

The F5-422 is a silver box made of plastic and metal, and describing it as much more would be making more of the limited styling than is necessary. If you want neo-classical storage enclosures, then TerraMaster isn’t for you, as its designs are all about solid construction and practical functionality.

To be blunt, this design is drive bays and LEDs at the front, ports and cooling at the back, nothing on the sides.

The lack of a front USB port or any button to transfer contents from external storage to the array might put some off, as this is common on some other brands.

What the F5-422 gets right it that the drive bays are easy to remove and mount the drives on, either 3.5- or 2.5in drives, but there is no locking mechanism on the trays, regrettably. While I like tool-less tray designs, TerraMaster provides a good selection of screws and a particularly good quality screwdriver in the box to complete a task you’ll most likely only do once.

Any drives you install inside might be there for years, running 24/7, so the most important consideration is cooling and this NAS has an excellent design to achieve that. Air is drawn from slots in the underside up over the drives and the side-mounted mainboard and then pumped out the back with two 80mm fans.

The speed of these is thermostatically controlled, and at full speed, they can move plenty of air through this enclosure. The only way that this can feasibly go wrong is if the fans fail, the temperature sensor reads incorrectly or the ambient air around the NAS gets too warm, as the cooling for five drives and a passively cooled Celeron is more than adequate.

One slight oddity I noticed is that early versions of this machine had an HDMI port that was disabled, but this latest production revision has the place for this output sealed, and it has no port. I’ve used TerraMaster machines with an active HDMI port, but they lack the software interface to make it truly useful, so its omission here isn’t much of a loss.

The headline act of this hardware are the three LAN ports on the back, but I’ll talk about that in more detail later.

When I’m looking at NAS boxes and meander through their specifications, I often experience a degree of déjà vu. And, reading the F5-422 specification is a trip down memory lane, since it has an almost identical platform spec to its four-bay brother, the TerraMaster F4-422, but also the QNAP TS-453Be and Synology’s DS1019+, DS918+ and DS718+.

These were all built on the Apollo Lake platform and use the Intel Celeron J3455 quad-core CPU with a base clock of 1.5GHz and a burst speed of 2.3GHz.

Synology has moved on to using the newer Intel Celeron J4125 in its subsequent designs, but QNAP still uses this platform on the TS-453BT3 and has also switched to the J4125 in its TS-453D models.

From a NAS perspective, the Celeron J3455 is an excellent choice since it is an exceptionally reliable device with an integrated GPU that can transcode 4K video and supports AES 256bit encryption. That makes the F5-422 well suited to being a video repository or any medium that might need to be processed along with being served.

What contributes to that scenario, and a few others, is the LAN connections that are better than almost any other NAS box at this price point.

For general use, two 1GbE ports are included that with an aggregation capable router can be combined to provide 2000Mbit/s of throughput to and from the network. These are the low cost means to support more users and still deliver decent performance, as a small switch supporting aggregation costs less than $30.

But for greater user numbers and even better performance, TerraMaster has also included a 10GbE port that on its own can support up to 800-1000MB/s transfers.

With a suitable switch, at least ten users could be supported simultaneously, providing 1GbE performance to all of them. And in a real-world situation, 20-30 users could easily be serviced by this hardware with little appreciable loss in speed.

The review machine uses the latest OS from TerraMaster, TOS 4.2, and this is a Linux-based distro that has been tweaked for NAS use using a web-based interface.

While the third-party applications that run on TOS aren’t as polished as those by Synology, they provide all the typical functions that most NAS owners might install, and it has support for Docker, Virtualisation, Dev environments and media presentation (Plex) in the 89 apps the system offers to install for you.

Some of these apps are in ‘Beta’, but you also have the option to install ones that aren’t in the collection for those confident in compiling and installing Linux apps.

While Synology still has an edge in this department, TerraMaster has come a considerable way with TOS in recent years, and unless you specifically want Synology branded apps or functionality exclusive to them, the ecosystem the F5-422 has is effective and well provisioned.

If the F5-422 has a weakness, it is the upgrade path of this device.

The only means to enhance the stock configuration involves dismantling the machine to access a single SO-DIMM memory slot on the mainboard. That there isn’t a panel to remove or access via the drive bays demonstrates that TerraMaster didn’t consider this a priority. Presumably, it doesn’t believe that many customers will bother to do this upgrade.

And, because the default 4GB of system memory is wired directly to the mainboard, and the maximum that the SO-DIMM slot will take is 8GB, the maximum RAM is 12GB, and not the 16GB that the chipset is capable of.

This cost-saving measure is a minor mark against this design.

What might have elevated the F5-422 would have been a PCIe slot or some means to expand the internal storage via Thunderbolt. But the only options are two USB 3.0 ports.

A typical Amazon price is around £20 more than RRP in the UK, but that does include shipping.  American customers can get it from Amazon with free shipping, making it a better plan to buy it online.

Check our chart of the best NAS drives to see more options.

Looking only at the specifications, the F5-422 is merely the F4-422 with an extra drive bay and a 20% price increase, but that misses the logic of those that designed this hardware.

With this number of conventional drives exploiting the networking capability of this machine will be practically impossible. As even with Enterprise-class drive performance, the throughput won’t add up to the 1250MB/s that the combined LAN ports can sustain.

But, and this is the F5-422 ace-in-the-hole, if you sacrifice one of those ports by including an inexpensive SSD set to be used as cache, then it can hit those read and write peaks. In hindsight, this design could have been even better had TerraMaster included an NVMe slot allowing all five bays to be used for storage, but at this price point, that is perhaps unrealistic.

There are a few classic scenarios where this design is perfectly suited beyond the typical backup server and small team server roles. One of these is to be a bridging NAS that is both a local storage device for a workstation and a network-accessible resource.

Plug a 10GbE LAN network adapter into the workstation or use a Thunderbolt to 10GbE gizmo, and that system will have a large local storage facility with up to 1000MB/s for both reading and writing and is also network connected via the aggregated 1GbE ports for centralised backup or project distribution.

This installation could have a massive capacity and inherent drive resilience, perfect for a mission-critical workstation.

There are many other potential uses for this hardware, but that fifth drive option combined with the inherent 10GbE LAN, at this cost, could be the decisive deal factor for those not willing to pay a premium for Synology or QNAP hardware.

For the modest asking price TerraMaster is asking, the F5-422 offers outstanding value.