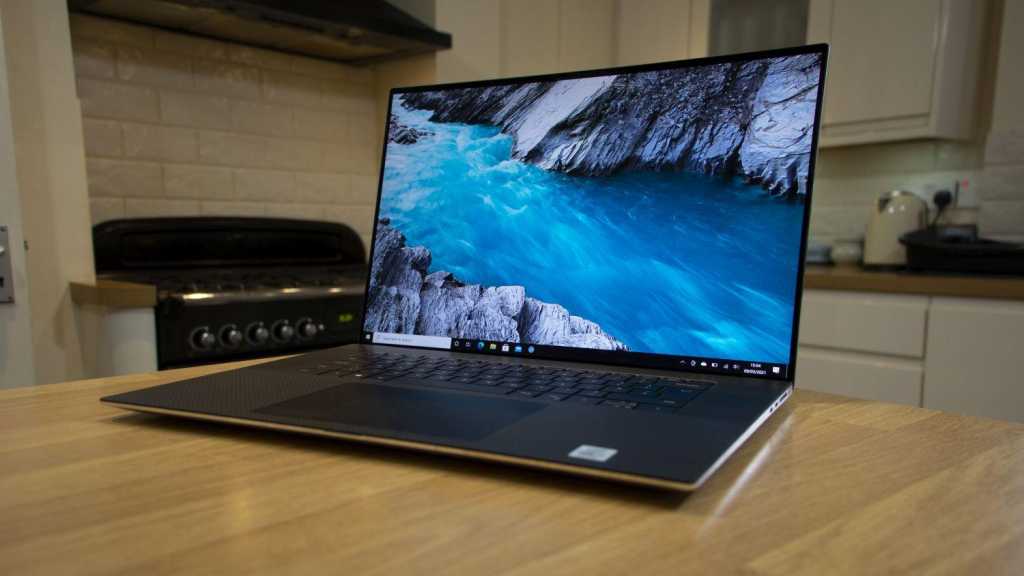 The Dell XPS 17 looks great, and it’s got a brilliant screen, impressive battery life and enough power to handle most everyday workloads. It’s expensive, though, and the high price doesn’t avoid some flaws.

The Dell XPS range has been one of the most prominent and impressive laptop brands over the last decade and the Dell XPS 17 9700 is a big-screen machine that’s aiming to continue that tradition.

This laptop tries to combine a large screen with a slick design that’s slimmer and lighter than most rivals – and it also attempts this while including enough power to scythe through tough content-creation and work tasks.

The XPS 17 doesn’t break the mould, but that’s not a bad thing: the carbon-fibre coating and a shining aluminium body make for a modern laptop classic. And the XPS has diamond-cut edges, a sleek tempered shape and no extraneous silliness.

Build quality remains great and the display’s tiny bezels mean the laptop is just 248mm wide. That’s impressive for a 17.3in – the Dell is barely wider than the Apple MacBook Pro 16 and narrower than the Gigabyte Aero 15. When desktop space is hard to find, that’s welcome.

In some areas, the Dell is more ordinary. This machine looks better than the blocky Gigabyte, but it’s not as sleek as the MacBook. It also weighs 2.5kg, which makes it heavier than both competitors. If you need a light 17in laptop, consider the LG gram 17 which is just 1.35kg.

Positively, it’s got four USB-C/Thunderbolt ports, an SD card reader, Wi-Fi 6 (11.ax), a Windows Hello-enabled webcam and a power button that doubles as a fingerprint reader.

Negatively, though, there are no full-size USB ports and no HDMI output – Dell includes an adapter, but you may end up needing a proper USB-C adapter. There’s no privacy shutter on the webcam and no wired internet, as per usual.

The MacBook Pro is similar, with four Thunderbolt ports, fingerprint sensing and Wi-Fi 6 but little else. In many ways, the Aero exceeds both thanks to a better port selection, 2.5Gbps Ethernet and Wi-Fi 6.

The XPS 17 uses the same keyboard as the XPS 15 – and that’s a double-edged sword. The Dell strikes a brilliant balance, with buttons that are comfortable, consistent and with welcome softness alongside pleasing speed and crispness.

It’s an excellent typing experience, and you’ll only want to look elsewhere if you want a firmer, crisper action or more travel than these 1.3mm keys offer.

The downside is the layout – there’s no numberpad and smaller cursor keys. The area on either side of the keyboard is devoted to speakers, but on a laptop of this size there’s no excuse to not have both.

The trackpad is large and accurate, and its two in-built buttons are good enough for everyday use – but they’re too soft and push down too far when compared to USB mice.

The display looks fantastic – those tiny bezels really emphasise the 17.3in touch panel, and this screen uses a 16:10 aspect ratio that compares well to the 16:9 ratios typically used elsewhere, with a revised resolution of 3840 x 2400 delivering extra vertical space for creative work.

The peak brightness level of 531 nits is huge and the black point of 0.26 nits is low. Both combine for a contrast ratio of 2,042:1, which is a fantastic result for any IPS display. Those figures mean the Dell serves up incredible vibrancy and depth, lashings of nuance and enough brightness to work indoors or outside.

The average Delta E of 1.82 and the colour temperature of 6,469K are top-notch, and the panel renders beyond 99% of the sRGB and Adobe RGB colour gamuts with volumes that easily get beyond 100%. It also displays an impressive 89.7% of the DCI-P3 gamut.

The XPS 17’s screen is easily good enough for any colour-sensitive photo-editing or design work – and its vibrancy and depth make it look fantastic in day-to-day use.

It’s better than both rival displays, as the Aero and MacBook panels can’t handle the Adobe RGB colour gamut. The speakers are decent, too, with a solid amount of bass and crisp, detailed mid- and high-end sound.

The components are powerful, but they don’t push the envelope. The Core i7-10875H is an older six-core CPU, and the RTX 2060 Max-Q is fast enough for photo-editing and 1080p gaming – but it uses Nvidia’s older architecture, and it has a cut-back clock speed.

It is, at least, an Nvidia Studio machine, so its drivers are optimised for creative applications.

The specification is completed by 16GB of dual-channel memory and a 1TB SSD that delivers decent read and write speeds of 3,272MB/s and 2,348MB/s.

There’s enough power here to handle a wide variety of computing tasks – the Dell will easily slice through photo-editing and content-creation and will handle loads of browser tabs and office tools without breaking a sweat. It’ll only baulk at tough tasks, like 4K video work and 3D modelling.

The XPS is a good thermal performer, too, unlike the XPS 13 9300. The exterior stayed cool and the Dell’s remained relatively quiet during tough work benchmarks – it’s quite a discreet machine. In Cinebench R23’s throttling benchmark the Dell scored 8,554, which is a decent result and far better than the Gigabyte, which indicates that the CPU didn’t suffer from serious throttling issues.

The RTX 2060 will handle most graphical workloads, and in terms of gaming it’ll play most single-player titles at 1080p and high levels of quality. It’ll have no problem with eSports games either – but it won’t play anything at 4K.

Compared to plenty of other machines, though, the Dell is not particularly fast. The Apple MacBook Pro currently uses older Core i7 and Core i9 chips that offer comparable speed to the Dell, but later this year it’ll be updated to Apple’s new M1 processor, and that chip scores around 1,700 and 7,500 points in Geekbench.

There are loads of laptops with newer, faster AMD processors now, too: for this money you could get a machine with a Ryzen 9 5900H, and that chip scores around 1,500 and 9,300 points in Geekbench. The Asus ROG Zephyrus Duo springs to mind.

In our battery life test where we loop an HD video at 120 nits brightness, the XPS 17 lasted for eleven and a half hours, which is decent – two hours longer than both rival machines.

With a light work test running it lasted for nine hours and 44 minutes, which is another top result. During a tougher work benchmark, though, the XPS lasted for just shy of three hours, and engaging the GPU and CPU in intensive work will reduce that timespan to two hours.

It’s a good result – if you’re careful you’ll get the XPS 17 through a whole workday without plugging in. But you’ll have to hit the mains if you want to push this laptop to its limits for extended periods.

The model I’ve reviewed costs £2,899/ $2,849, so it’s hardly cheap – the Aero with the same processor and its RTX 3070 graphics costs £2,599, while Apple’s MacBooks are currently both a little cheaper than the Dell, albeit with their older Core i9 CPUs.

Several alternative specifications are available. A version with a Core i5 processor and Intel’s integrated graphics – and just 8GB of memory alongside a Full HD display – costs £1,799/ $1,399.

You can also buy the XPS 17 9700 from Amazon, Currys PC World, John Lewis and Very – although they don’t have the cheapest model.

These alternatives are all expensive even at the base price. If you’re not fussed about fancy design, all of these specifications can be replicated for hundreds of pounds less on other machines.

There are also plenty of alternative options in our best laptop chart.

In many ways the Dell XPS 17 is deeply impressive: it looks fantastic, the screen is a big, bold and brilliant option for creative work and its battery outlasts rivals.

In several key departments, though, the XPS 17 is a mixed bag. It’s powerful enough, but plenty of machines offer more grunt, and the stellar design is undermined by a hefty weight.

The keyboard combines great typing with a poor layout, and there are great features alongside notable omissions. It’s also expensive when you consider the components on offer here.

The Dell XPS 17 isn’t for everyone: if you need more power, more features or a lower price, you can satisfy those cravings elsewhere.

There’s also an argument that the Dell is both ageing and expensive. But if you’re willing to shell out, this is a robust, good-looking machine with a top-tier 4K display.