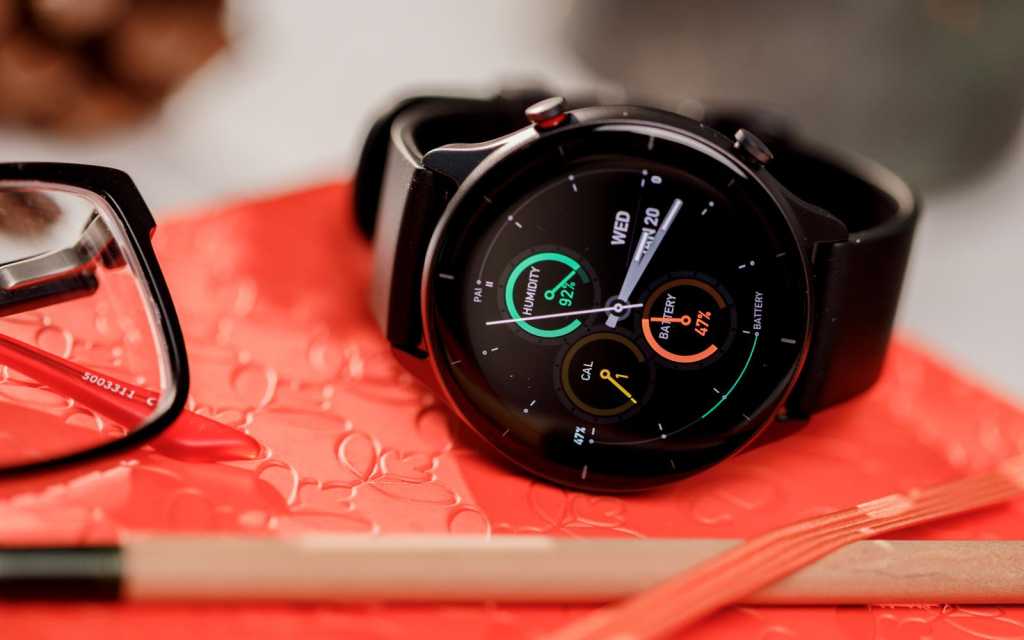 The Amazfit GTR 2e has some of the greatest battery longevity we’ve seen on a smartwatch, but some of the sensors are hit-and-miss.

The Amazfit GTR 2 line continues to expand with the GTR 2e. Whilst it is similar in appearance to the standard GTR 2, it boasts a far longer battery life for an even cheaper price – though you do give up the built-in speaker, meaning you can’t use the watch alone to take calls.

The GTR 2e was released alongside the GTS 2e, and both smartwatches are out now in the UK. If you’d like to know how this watch performs in everyday life, then keep on reading.

The Amazfit GTR 2e boasts an extremely similar design to the standard GTR 2, with a large circular face and a silicone strap. The variant I tested was black, but you can also get the watch in a light green or grey finish.

The screen isn’t quite as large and clear as the GTR 2, with a 2.5D flat finish rather than a 3D curved one. The bezel surrounding the face is made of aluminium and is covered with glass. 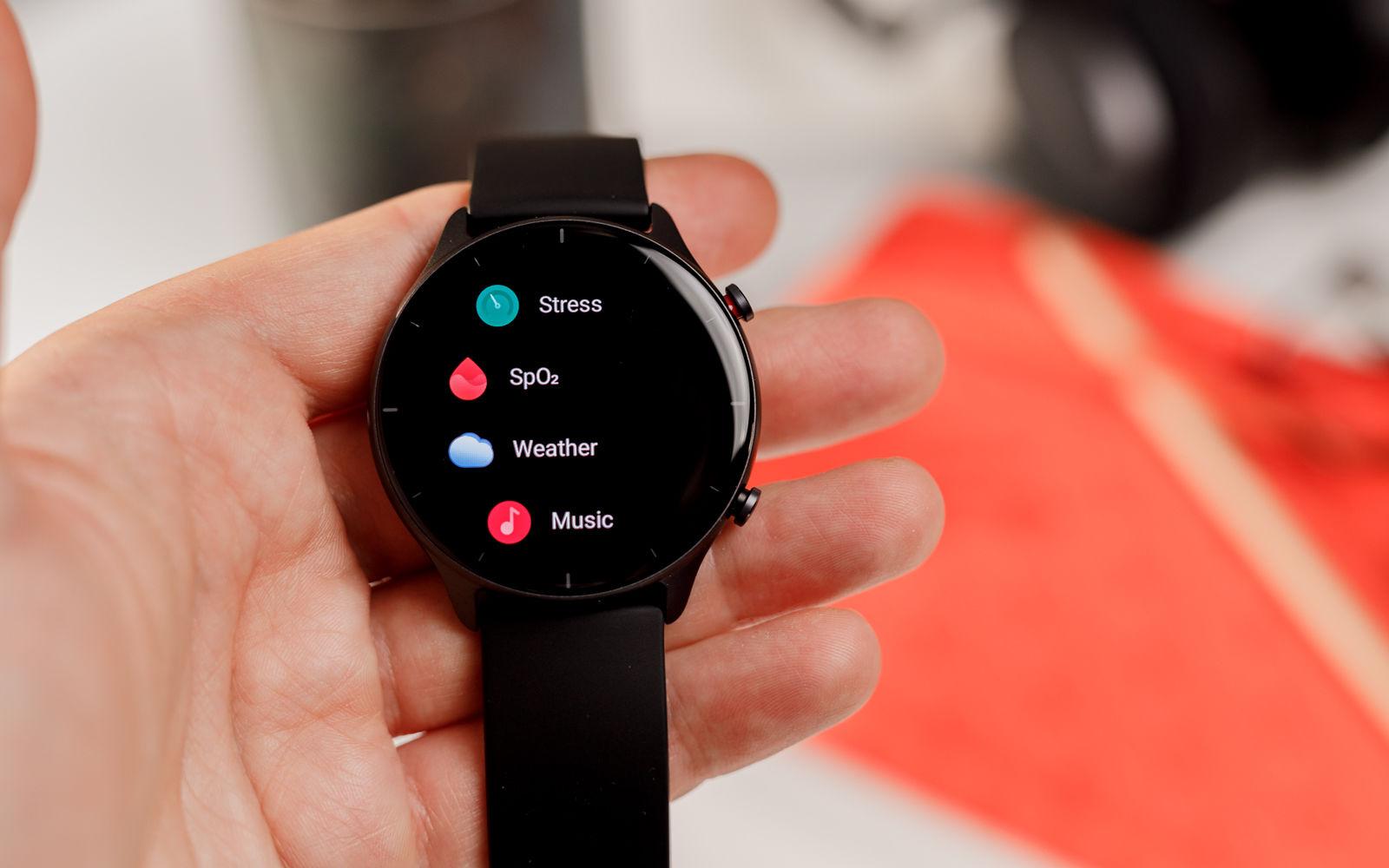 Overall, the look is quite sporty, and maybe not as refined as something like the Zepp E or the Withings Move ECG. Still, it could pass as an everyday watch should you want it to.

The 1.39in AMOLED display is made from tempered glass and comes with anti-fingerprint vacuum coating. The watch didn’t pick up marks easily after several weeks of use, so the coating works well.

However, the silicone strap isn’t breathable, and often leaves my arm quite sweaty and dirty after vigorous exercise. Make sure you always take it off, clean it and dry it after any workouts like this.

Navigation is pretty simple on the watch – you use a combination of the buttons on the right-hand side and by swiping across the screen. I had no issues using the buttons and the device was responsive to the touch.

The GTR 2e features an optical heart rate sensor, gyroscope, accelerometer, air pressure sensor, temperature sensor, ambient light sensor, waterproofing up to 5ATM and Bluetooth 5.0. I wasn’t able to test it in the pool due to current Covid measures, but it still worked fine after being submerged in water. 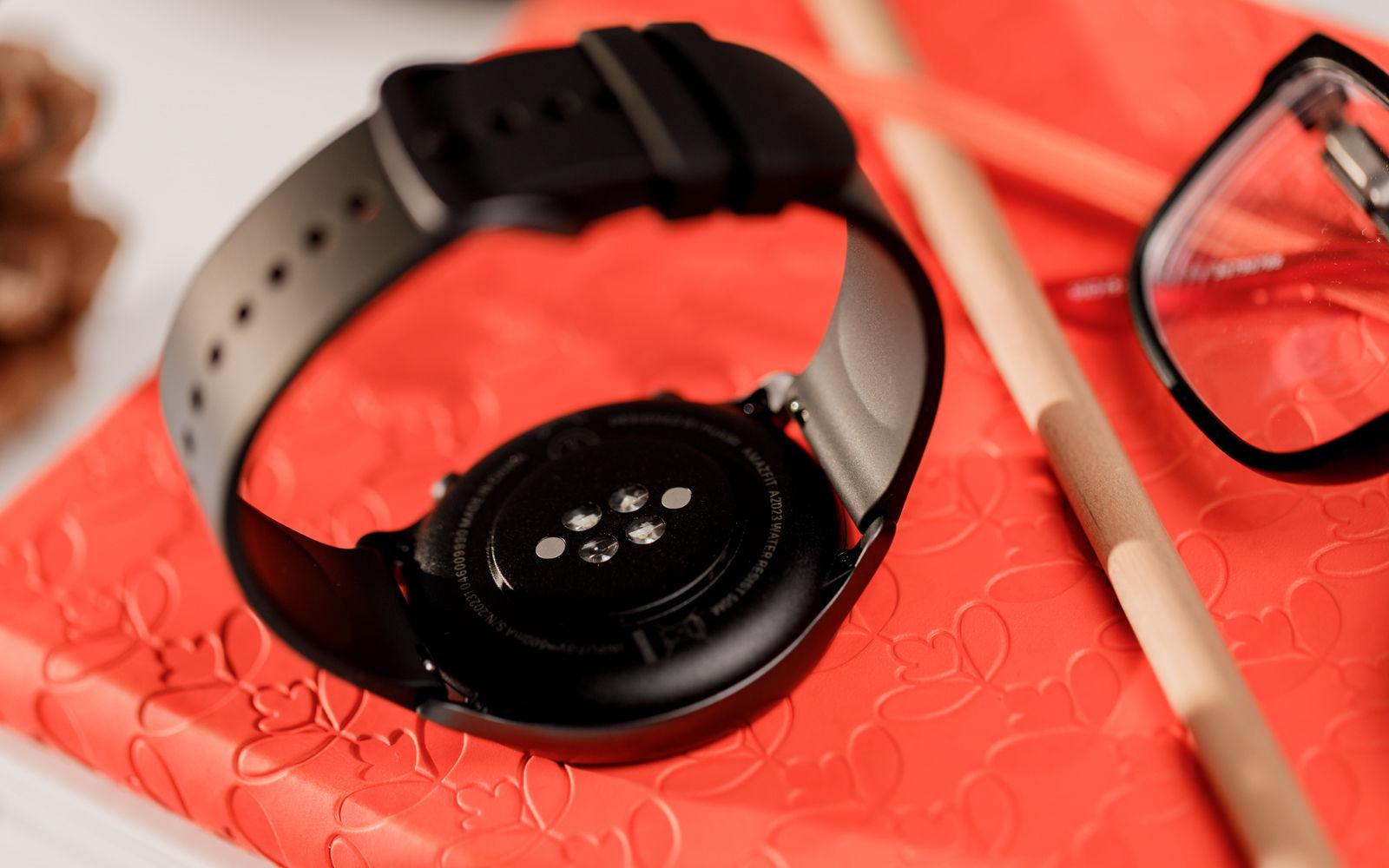 There’s no built-in speaker on this watch like there is on the standard GTR 2 – which means it’s not suitable if you want to use it to take phone calls.

The heartrate monitor on this watch seems largely accurate and in line with readings I have from other fitness trackers. It’s also capable of taking readings of your stress and SpO2 levels.

I encountered a few hiccups taking my SpO2 readings in which the watch kept saying I needed to correct my positioning, despite the fact that I’d placed it as the watch directed (horizontally on a table without moving). This was the same problem I also encountered on the GTR 2.

Temperature taking is a newer feature, which again seemed to give normal readings. Amazfit does state that for the most accurate data the watch should be against the skin for at least 15 minutes, as other factors such as the environment can influence the reading.

The Amazfit GTR 2e runs on Huami’s custom OS. This means that there’s no support for third-party apps on the watch, including Spotify and MyFitnessPal. However, the watch does feature a lot of the core things you’ll need, including alarms, calendar, phone notifications and the weather forecast. 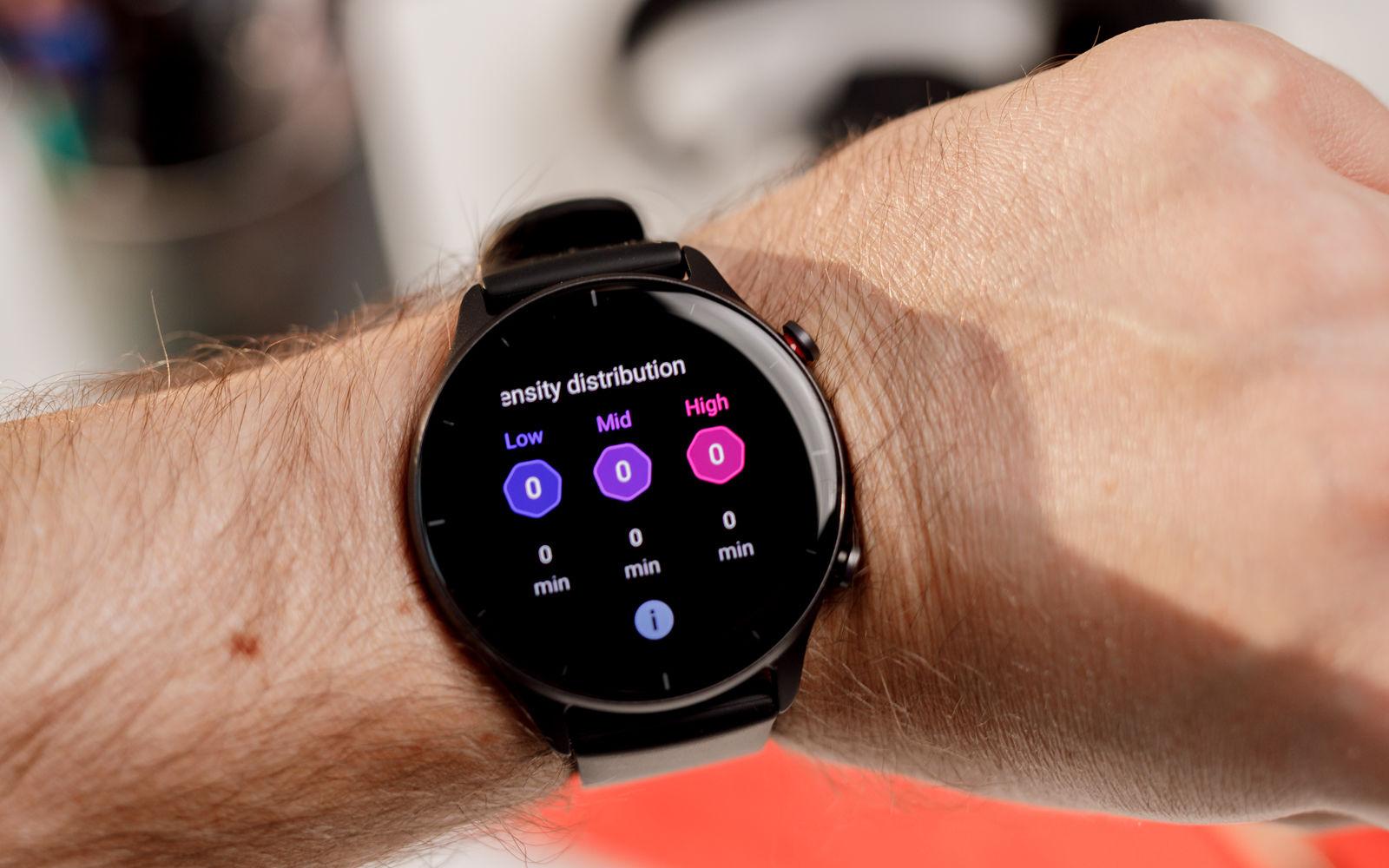 However, the main reason why you’ll buy this watch is for its fitness tracking abilities. The Amazfit GTR 2e features over 90 different built-in sports modes. These range from indoor sports like yoga, swimming and weightlifting, to outdoor sports such as walking, cycling and running, and even more obscure things such as skiing and judo.

The watch tracks the time you worked out, the distance you travelled, the calories you burnt, your heartrate and for certain types of exercises more specific things such as the number of reps, your average stroke rate in swimming etc. The watch is equipped with a GPS sensor, so you can exercise without your phone in your pocket and still get a map of your workout.

The watch has ‘smart recognition’ for six core workouts (walking, running, elliptical, cycling, pool swimming and treadmill), which should automatically detect when you’re doing one of these workouts and record it in the app. I tested this out walking and found it did recognise the activity, but for more granular detail you’re better off setting the workout manually.

Huami – the parent company of Amazfit – also owns the Zepp brand. Therefore, Amazfit wearables use the Zepp app to store all the data recorded on the watches. 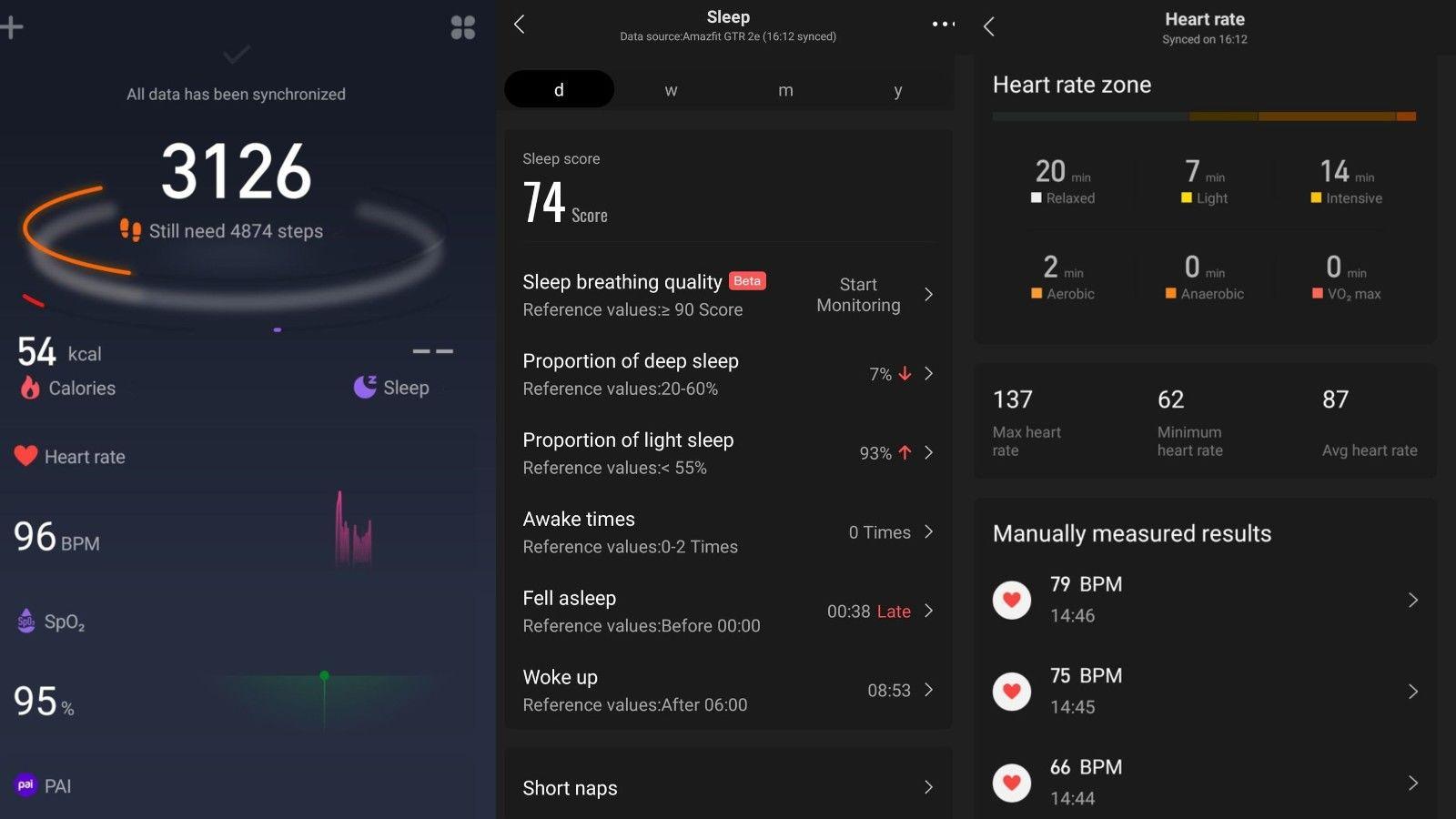 The app itself has a clean layout, with sections for the exercise you’ve done, your sleep, your heartrate, your step count for the day and more. The app includes more detailed advice as well, such as logs for your sleep where you can add in more information such as what you drank before bed and how it impacted on your sleep.

The app of course isn’t perfect. There’s no links to accredited health pages when information about your sleep or exercise is given, something that rivals such as Withings offer.

One of the standout things about the GTR 2e is its battery life. Despite having the same 471mAh cell as the GTR 2, the omission of some features means that the estimated average battery life of the watch is 24 days, ten days more than the more expensive watch. 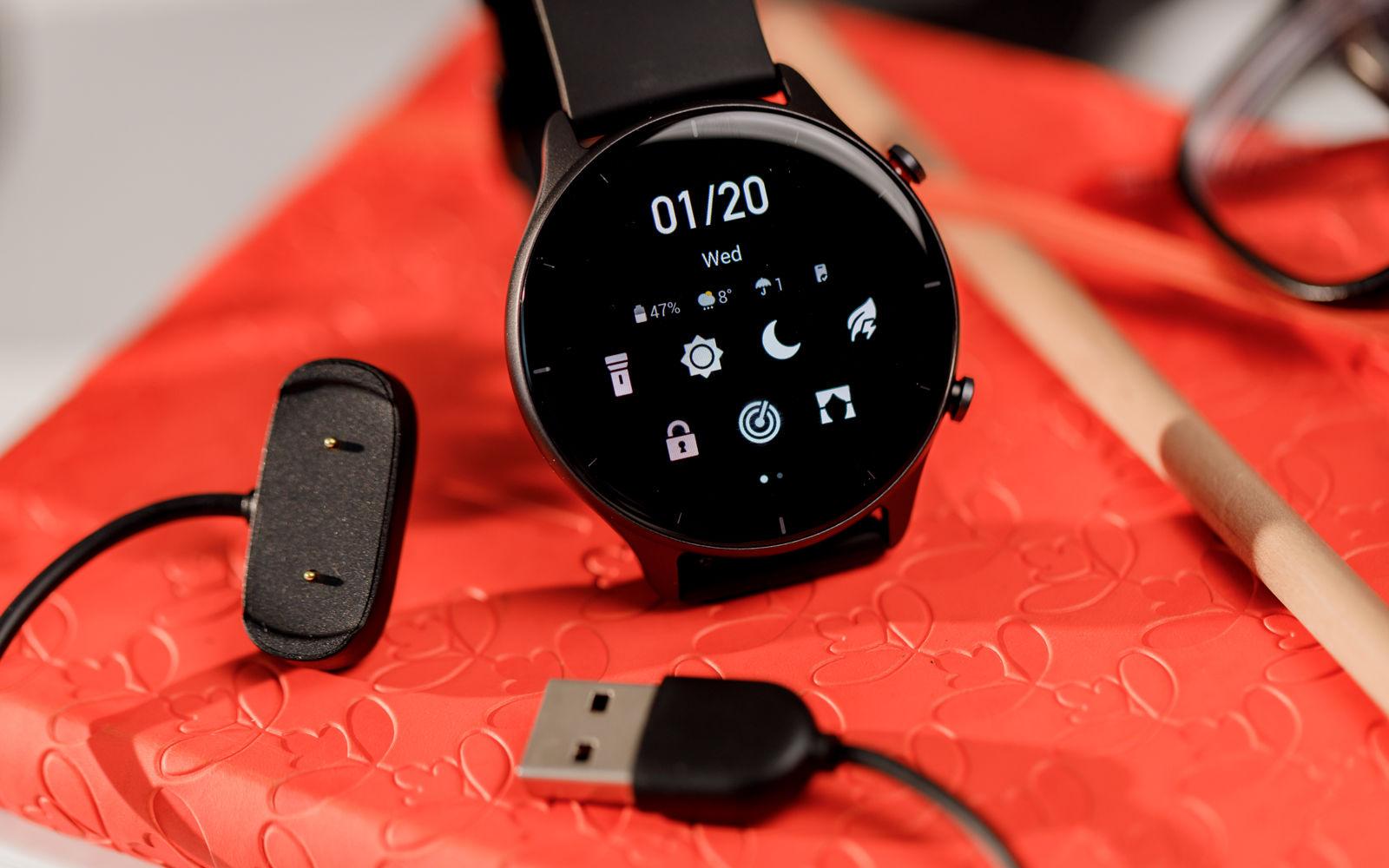 Under my own testing, these figure claims seem accurate. Of course, if you use it quite a lot or put on the always-on display, it will drain faster. You can also enable a basic use mode, which will take the battery life to around 45 days.

Charging the watch takes roughly two and half hours. Whilst this isn’t the fastest, the length of the battery life is worth the time.

The cost is decent reduction from the Amazfit GTR 2, which starts from £159/$179. If you’re trying to choose between the two, I personally believe that the GTR 2e is the better buy. Whilst having the ability to take calls on your smartwatch is a useful feature, the battery life on this device is killer, and it comes in more colour choices than the main line watch. 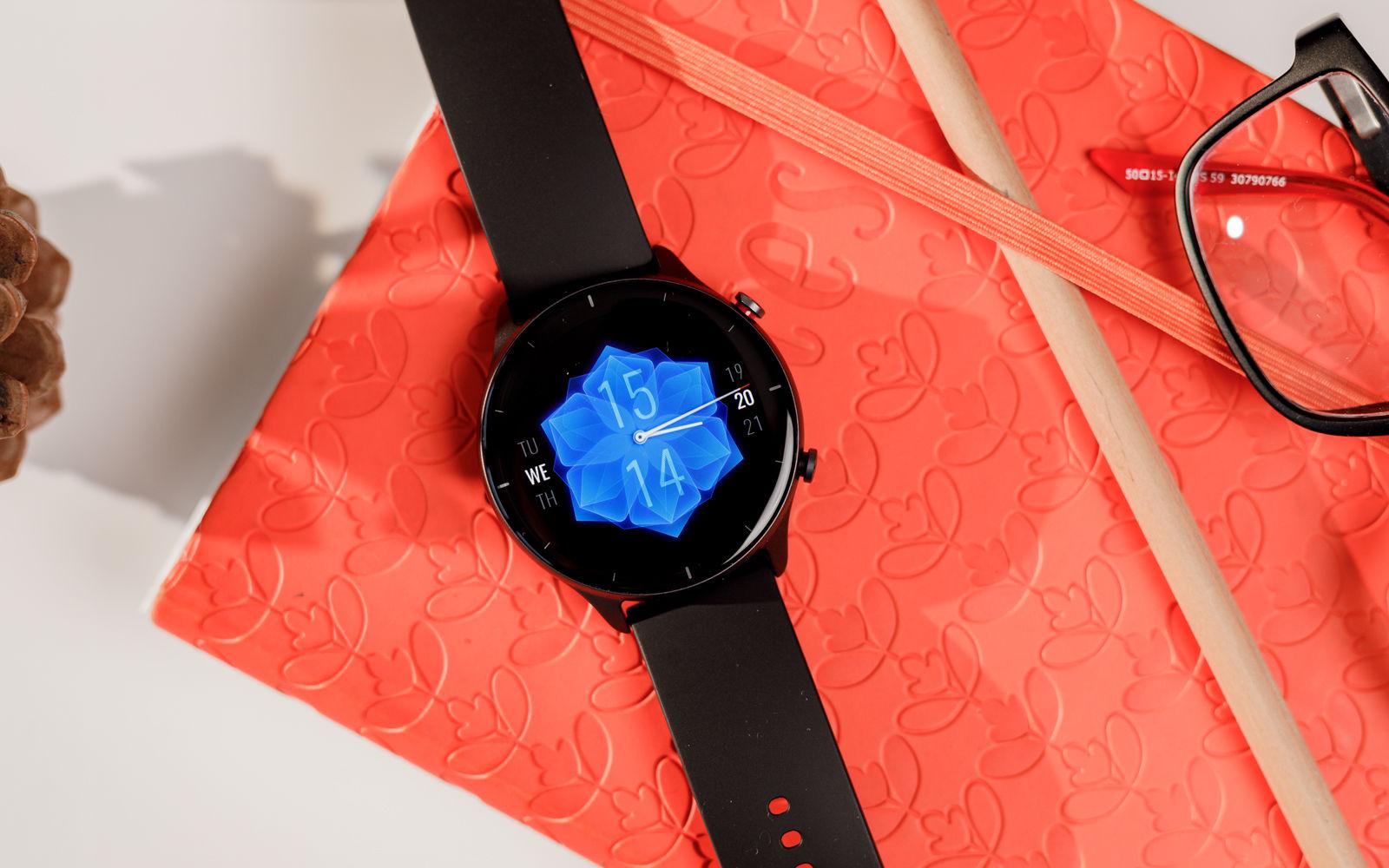 The GTR 2e is also a great price in comparison to devices from Fitbit and Apple. If you want to look at rival watches from other brands, I recommend checking out the Huawei Watch Fit, which also boasts a similar design to the Apple Watch.

For more options, you can take a look at our charts of the best smartwatches and best fitness trackers.

The Amazfit GTR 2e is yet another smartwatch from Amazfit that packs a punch for the price, especially when it comes to battery life. This is one of the longest lasting devices on the market right now, and if that’s a deciding factor for you then this should be a contender.

That being said, the SpO2 tracking is hit-and-miss, and the silicone strap makes the overall design feel less premium. The Zepp app also needs some tweaking and refinement.

Despite those faults, this is still a great wearable for the cost, with decent tracking software and all the necessary features you need.