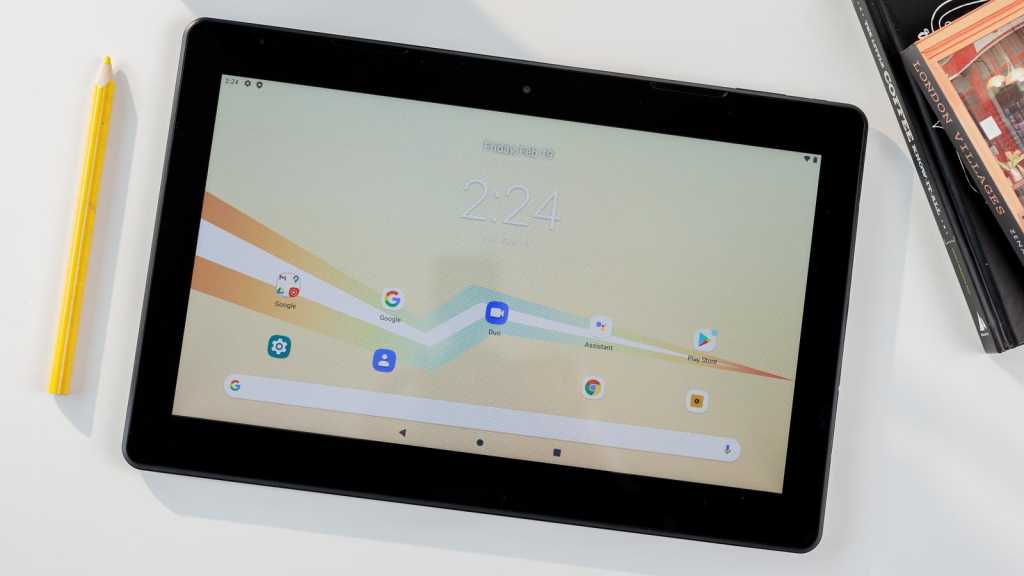 The Hannspree Zeus’ large screen and low price mean it has value for professionals who may want to host presentations, as well as parents, looking for a basic kids entertainment device that doesn’t put the TV out of commission in the process.

Hannspree specialises in external displays, touchscreens, laptops and gaming, but the company also happens to manufacture tablets, the latest of which is the 13.3in Hannspree Pad Zeus.

If you’re looking for a tablet that’s large enough to watch videos and play games, but is also well-suited to visual presentations, handling spreadsheets or even homeschooling, then the Zeus might fit the bill.

The Zeus is an imposing 13.3in (approx. 34 cm) tablet, weighing 1.25 kg. It’s not as portable as an iPad Mini and probably isn’t particularly well suited to everyday use, especially if you were intending on taking it out and about with you.

The power and volume control buttons are situated along the top edge of the tablet, which in practice renders them a little too discreet and subtle for my taste.

Finally, on the right-hand edge, you’ll find a barrage of ports: microSD card slot, mini-HDMI, USB-C. It’s an impressive array of I/O that allows you to connect your tablet to an external screen, plug in headphones, a mouse or even increase its storage space.

The Zeus is a simple, no-frills slate with all the basic connections you’re likely to need for everyday use, however, if you want a fingerprint reader or other more premium touches, then you’ll have to look at pricier alternatives.

Despite its Full HD resolution, video and image quality on the Zeus’ 13.3in IPS LCD panel is not the sharpest, with noticeable pixelation (if you’re on the lookout for such maladies). Those who aren’t pixel-peepers, however, needn’t worry.

Above the screen, you’ll find the 5Mp selfie snapper and a set of stereo speakers, which sound pretty good, despite lacking in the bass department.

This tablet runs a pretty stock Android 10 experience and offers all the Google-endorsed features those familiar with most Android phones should recognise.

Switching to and from landscape or portrait mode – for apps like YouTube – is seamless, however, given the size of the Zeus, you’ll likely find yourself using it in landscape on your lap or a flat surface most of the time.

One surprising inclusion is a dedicated case, that not only protects the Zeus while leaving all its ports and hardware controls accessible, but also helps angle the slate for more comfortable use on a flat surface.

At the same time, it’s a shame that Hannspree didn’t also spring for a stylus or keyboard – even as optional accessories, which would have been practical inclusions that would have played to the strengths of such a large tablet.

You’ve got to be a certain type of user to want to take photos using a tablet, particularly one the size of the Zeus. In any case, you should know that it has a 5Mp front sensor and a 5Mp rear sensor. Both are decent enough for basic snapping and the occasional Zoom call, but it goes without saying that you’d be better served by the sensors of your smartphone in most situations.

Hannspree has given the Zeus 3GB of RAM, which is on the more meagre end of the scale, as far as Android devices go, but it works. It’s also powered by MediaTek’s MT8183 octa-core processor, which is more readily found in the likes of Chromebooks than it is Android tablets. Here though, it provides a surprisingly smooth and lag-free user experience (when browsing or playing low-impact games).

That said, if you’re looking for a tablet for video/photo editing or for more demanding games, the Zeus isn’t the best fit.

Here’s how it performs against its closest rivals, the  Samsung Galaxy Tab S6 Lite and Lenovo  Smart Tab P10, but also against a flagship like the  12.9-inch 2020 iPad Pro.

The Zeus comes with 32GB of internal storage space, which nowadays is pretty limited but should still allow for a few apps, movies, photos and important documents. If that’s not enough you can add a microSD card up to 128GB in size to unlock more breathing room for your media.

A capacious 10,000mAh battery means you won’t have to worry about plugging it back in every 30 minutes, as it should last you about through a day’s worth of use or more, doling out approximately 6 hours and 40 minutes in our PCMark battery test – on-par with Samsung’s flagship Galaxy Tab S7+.

As for recharging, perhaps one of the strangest quirks of the Zeus is that it recharges via a DC 5V, 3A power adapter, which recharged the battery to 11% in 30 minutes.

The Hannspree Pad Zeus is officially priced at £269 but is available on Amazon UK for £281.52 (at the time of writing), barely undercutting the sleeker but smaller Samsung Galaxy Tab S6 Lite.

As of right now, you can visit Ebuyer, who currently sell the Zeus for just £249.99.

Despite its size, Hannspree’s Zeus is an unassuming slate that doesn’t push the envelope on performance but holds value for those looking for an affordable big-screen tablet.

Its pricing and feature set means that it’s just as much at home entertaining kids as it would be supporting a boardroom presentation or anywhere you might want to plug into an external display.