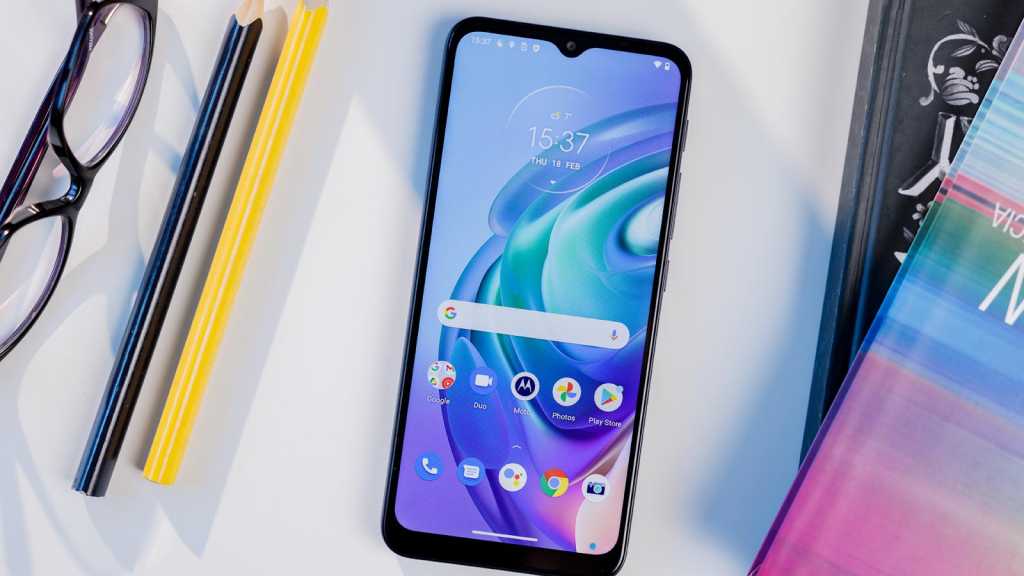 The G10 is basically a slower, cheaper G9 Play with a slightly better camera. Consider what’s most important before laying cash down on this, similarly-specced rivals like the Redmi 9, or pricier alternatives that afford a few extra luxuries, like the Realme 7.

Motorola expands its G series with the Moto G10, which launched alongside the Moto G30. The series marks Motorola’s refreshed efforts for a clearer naming convention, where a higher number implies stronger performance.

But will this ring true for the G10 as a step up from the G9 phones?

Not much has changed when it comes to the G10’s design, compared to the G9 series: plastic body, dewdrop camera, rear fingerprint scanner – it’s all very familiar. Yes, it’s predictable, but in a forgivable “if it ain’t broke, don’t fix it” way.

Motorola recycles the plastic aesthetic of the G9 series – but instead of the Play’s pebbly smooth back, you get the shimmery matte sheen of the Power, now with a rippled wave effect for enhanced grip. The model I reviewed came in Aurora Grey, but you can also pick it up in Sakura Pearl.

The fingerprint scanner proved reliable unless my fingers were damp (the phone’s IP52 water and dust repellent, by the way), in which case I used the PIN unlock. For those who prefer, there’s also a face unlock option – a feature that’s also available in the G9 phones.

The G10 charges via USB-C and supports Bluetooth 5.0, dual-band WiFi and NFC. And like the G9 series, a dedicated Google Assistant button sits above the volume rocker. You also get a trusty 3.5mm headphone jack.

I was disappointed to see the G10’s 6.5in display wasn’t as punchy as the G9 Power’s. In fact, the G10’s screen matches the G9 Play’s 1600×720 HD+ resolution. Both handsets also use budget IPS TFT display technology.

The G10’s screen isn’t all terrible, though. To match the criticism I had towards the G9 Play, it just lacks that satisfying richness and detail you might find in a more refined display. But one that’s not necessarily more expensive.

Cameras were the Achilles heel in both of the G9 phones I reviewed. The good news is Motorola has finally upgraded the cameras with the G10. It’s not an earth-shattering improvement, but I’ll give credit where it’s due.

Photos on the G9 Play/Power lacked vibrancy and depth, making photography generally a dull experience. While there is still some loss in detail on the G10, you do get more punch and contrast.

The rear camera setup consists of a 48Mp main sensor, along with a 2Mp macro and 2Mp depth – all specs we saw on the G9 Play. One key change, however, is a new 8Mp ultrawide sensor; a nice boost if you want to snap a skyline or outdoor vista.

The level of detail in the shot of the London Eye (below) really surprised me. It had much more depth compared to anything the G9 Power or Play produced. You do get a bit of warping towards the edge of frame though, as you can see in the boat.

It helps to have a strong source of light when shooting with the G10, as low light photos lose definition to a fault. In the shot of the setting sun, it’s hard to distinguish darker areas of the frame, with the trees mixing completely into the background.

I saw an improvement in macro photography too. With the G9 phones, it was difficult to focus on a subject in macro mode. The G10 struggled when I got too close (you can see three varying distances below), but could reasonably handle close-ups, at the expense of depth and colour.

While the G10 name might suggest an upgrade from the G9, especially under Motorola’s new naming convention, it isn’t really. In fact, unlike the G9 Play and G9 Power which both use the mid-range Snapdragon 662, the G10 relies on the lower-end Snapdragon 460.

While this cuts down costs, you also get a slower phone, which you can see in the Geekbench performance benchmark below. I found that the G10 took time to start up and lagged at times during use. It wasn’t offputtingly slow, but just a sliver slower than you might like.

Whether this is a problem depends on how patient you are and how you aim to use your phone. If it’s primarily for light web browsing and Whatsapp messaging, you’ll be fine, but for anything more demanding, like gaming, you’ll want more muscle.

In our gaming benchmarks, the G10 only outdid the aforementioned Redmi 9 – which is itself a fairly middling phone that doesn’t support NFC in all regions.

There’s also the current king of budget phones, the Poco X3 NFC, at £199 (for 64GB). Yes, it’s costlier than the G10, but a better all-round package. For £70 more, you get markedly stronger performance and a killer 120Hz display.

There are plenty of other capable budget handsets that deliver performance in our round-up of the Best Budget Phones.

The Moto G10 ships with Android 11, and like the G9 phones, offers a clean Android experience without bloatware or additional apps. You get the same UI features as on past phones too, including the karate chop motion for the flashlight and my favourite, the three-finger screenshot.

Within Android 11, the power menu also includes more options such as Google Pay set-up and smart device configurations, as pictured below (Euphendron is our Eufy RoboVac G10 Hybrid – the name bears no association to the Moto G10).

If Motorola’s nailed anything, it’s battery life. The G10 boasts a large 5000mAh capacity battery, which the company claims will last over two days, and they’re right.

I could manage about three days with moderate use, including video calls, web browsing and social media. You get a 10W wired “fast charger”, but that’s not particularly speedy in the grand scheme (the flagship Vivo Iqoo 7 boasts 120W fast charging!). 10W is also a downgrade from the respective 15W and 20W wired fast charging that comes with fractionally pricier G9 Play and G9 Power.

I was able to gain back 22% juice in 30 minutes, which goes a surprisingly long way; about a day in my case, with light usage.

If you’re not worried about performance, camera or otherwise, then the even more affordable Moto E6s might fit the bill, otherwise, the Redmi 9 doesn’t necessarily give you more for your money but holds its strengths in different areas to the Moto G10, depending on your priorities.

You can buy the G10 in Sakura Pearl or Aurora Grey directly from Motorola or from Lenovo, Amazon, Laptops Direct, and Appliances Direct.

The G10 is basically a slower, cheaper G9 Play, which makes it difficult to recommend over a number of other budget offerings.

It’s not a total dud though. The G10’s clean UI on Android 11 and long battery life make it a fair choice for those after a simple phone for messaging and light browsing. Photography still remains lacklustre, but thankfully there is some improvement over the G9 series.

It’ll be interesting to see whether the Moto G30 fills any of the gaps that the G10 left behind.