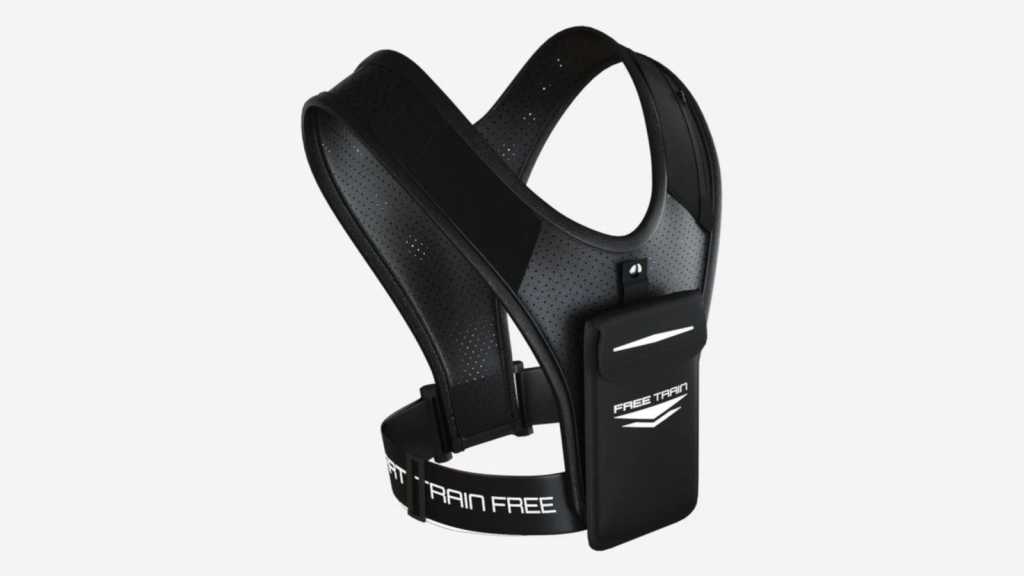 While it has limitations, the V1 Vest looks smart, feels robust and breathable, and is the most convenient solution I’ve so far found to the problem of using a phone while running.

The secret to running – which is fundamentally a disagreeable way to spend one’s time – is distraction. And once you leave the TV-filled gym, you’re heavily dependent on your phone and a set of running headphones to keep the bad thoughts at bay.

But where do you put the phone? Things fall out of pockets, hands get sweaty, and handbags are impractical. One option is an armband, although that can make it difficult to operate the phone in transit; a more advanced albeit costlier alternative is a full-torso harness, like the Freetrain V1 Vest.

The V1 comprises a flexible V of perforated material on your back, and another on your front with a pouch for your phone, all connected together by two straps over your shoulders and a stretchy belt. The shoulder straps contain two very small pockets for keys and similar, one sealed with velcro and the other with a zip.

I tested the black model, but the harness is also available in ultra-reflective silver (that version is called the VR Vest). That might be better for road safety when running in urban environments, although the black version does have some reflective patches too.

The first challenge is getting inside. Over prolonged use I’ve found that the best approach is arms first, with head to follow, but some undignified tugging and wriggling is generally required. Once the harness is on it’s pleasingly snug and barely moves; there is virtually no bouncing around and precisely zero danger of it falling off.

(The makers claim the V1 is unisex, but fit and comfort will to a large extent depend on body shape. The harness’s position is not well suited to people with large breasts.)

You can make entry easier by adjusting the length of the belt straps, but this is a double-edged sword: it also makes the fit looser and more bounce-prone once you’re inside, and the position of the strap adjusters is so far round the back that it’s almost impossible to tighten them once it’s on – what you really need is a knight’s squire to help you out. I’d therefore recommend keeping the straps shortened and sacrificing a few seconds of dignity to ensure a nice secure fit.

The V1 sits quite high on the torso – or at least, it did on mine – with the belt around the bottom of the ribcage rather than sitting lower on the waist. I quite like the way that looks (it faintly evokes those mini training tops you sometimes see worn by sportspeople before a big game), but it brings the phone a little closer to your face than is perhaps desirable; more on ease of use in the next section.

Talking of aesthetics, my wife screwed up her face when she first saw the V1 in action, and informed me that there are better-looking alternatives out there. So it may divide opinion.

Last of all, removal. The first time I took the V1 off (with the straps in a tight position, remember) I almost threw out my shoulder trying to reach across at an awkward angle. I’ve since found that it’s very important to reach directly over your head with both arms, straight backwards, grab the back section, and pull it forwards over your head. This will make your glasses fall off if you forgot to remove them first, but it’s otherwise painless and effective.

How well does the V1 work?

The idea is that you slip your phone into the pouch at the front, which protects it from the elements but still allows you to use it normally. This works to a degree.

First of all, I found it unexpectedly difficult to get the phone in. The makers boast that they “can confidently say that the pouch will fit 99% of modern phones”, but my iPhone 12 Pro was a tight fit even after removing its silicone case, and I am not convinced that a 12 Pro Max, or one of the larger Android phones, would make it inside at all. I would suggest contacting the company to ask about your specific model if it’s on the large size. An insert is included for smaller devices.

The pouch is stitched to the harness at the bottom, and attaches via a popper at the top. When the popper is attached the pouch sits flat against your chest and the phone is invisible to passers-by; when you detach it the pouch hinges downwards and you can access the screen through a transparent plasticky sheet on the interior.

Whatever they’ve made this sheet from, it works well, and I had no trouble using the iPhone’s touchscreen. Oddly enough the hardware buttons were considerably more of an issue, because the black-and-grey pouch surround conceals them and makes it difficult to get tactile feedback.

Simply turning up the volume on a podcast was far more of a hassle than usual (I recommend controlling this via an Apple Watch or similar if you can), and at one point I got confused and hit the power button so many times that I contacted emergency services by mistake. That one’s probably on me.

It’s not easy to control the phone and keep running at the same time, because you have to crook your neck and look quite sharply downwards; it would make sense to at least slow down significantly while selecting your next podcast to avoid bumping into someone or something. I also found the choice of a popper less than optimal, because it takes a fairly strong tug to get it loose and then is difficult to close up again afterwards. Maybe velcro, which is used in other parts of the V1 (including the opening of the pouch) would have been easier, but then again it might not be able to reliably take the weight of the phone.

When I originally tested and reviewed the Freetrain V1, across a number of weeks in the winter, I was unaware of a problem that’s since become striking during summer use: sweat.

In hot weather, the pouch covering gets damp from sweat, and this moisture can cause bumps against the runner’s chest to be interpreted as taps on the screen. I’ve found that songs and podcasts occasionally jump unexpectedly, which is annoying, but far more seriously my iPhone has locked up on more than one occasion because it thought I was trying (and failing) to put in the passcode.

I’ve come up with a workaround that solves this problem: you need to go into Settings before you start the run and disable both Tap To Wake and Raise To Wake. That way screen contact will be ignored unless you first press the power button. (I’m not an Android expert but there will be similar functions on non-Apple devices.) The makers of the vest were unable to offer any fixes beyond this.

The fix largely solves the problem, although it remains a mild faff having to turn those two features off before every run and back on again afterwards, and makes the phone itself slightly more awkward to use while you’re out. It’s certainly not a deal-breaker, but this issue resulted in a drop from a score of 3.5 (when originally reviewed) to 3.

I’ve carried on using the V1 Vest long after completing enough testing for this review, which is a reliable sign that it’s a solid product overall.

The phone’s hardware controls can be difficult to access on the go, and opening up the pouch to do any kind of navigation is more of a hassle than I’d like. You’ll also need to disable Tap To Wake and Raise To Wake (or the equivalent on Android) to avoid accidental screen inputs in sweaty conditions.

But it looks smart (in a slightly dorky sort of way), feels robust and breathable, and is the most convenient solution I’ve so far found to the problem of using a phone while running.

The sticking point may be that £29.99/$39.99 price tag. Running armbands are available for around a fifth of that, and while this is certainly a better option, you’ll need to be a pretty serious runner to justify the extra cost.