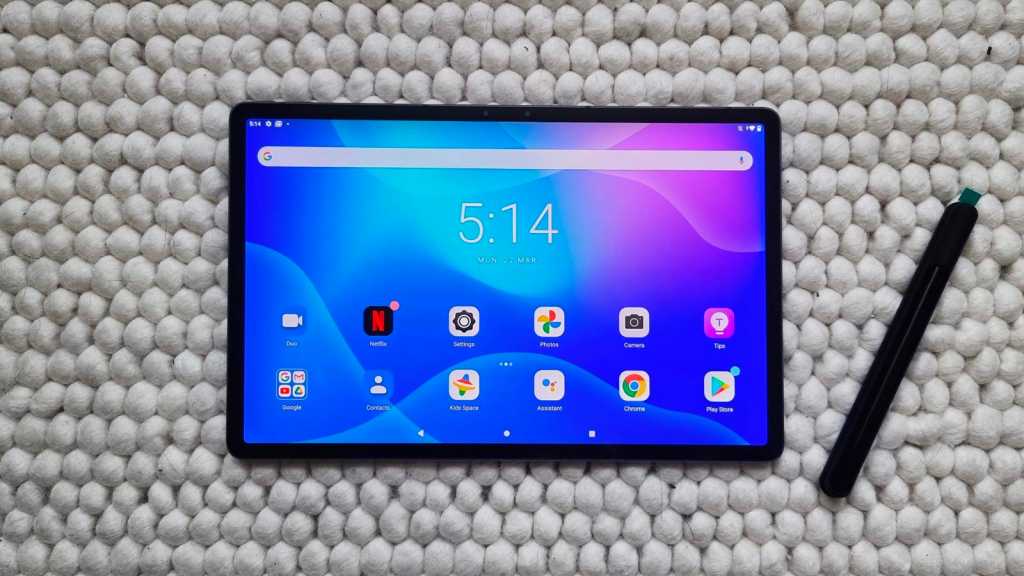 The tablet market has effectively been a three-horse race for the past few years, with Apple’s iPads as the default for most people, Amazon’s Fire slates serving as the go-to affordable option that’s also great for kids and Samsung’s Galaxy Tab line as the natural alternative for those who simply don’t want either of the other two.

There are other players in the space, though, and Lenovo is looking to take a larger slice of the pie if its intentions with the Tab P11 Pro are anything to go by.

The Tab P11 Pro features a precisely finished aluminium unibody that’s only 5.8mm thin (excluding the camera bump). It feels sturdy, despite its svelte profile, and offers subtle sophistication with a dual-tone back finish and polished chamfers around elements like the volume controls and camera surround.

At 485 grams, it’s lighter than even some smaller-screened rivals, making it easier than you’d expect to wield for extended periods of time, without having to set it down for wrist breaks.

Call it imitation or inspiration in light of Samsung’s Galaxy Tab S7 series but the naked P11 Pro is a well-built, well-proportioned and smart-looking slate that would work just as well in a professional setting as it would as an everyday tab, around the house.

In terms of use cases, part of the P11 Pro’s appeal comes from the additional accessories that Lenovo has paired with its newest tablet. The unit I tested was supplied with both the dedicated keyboard cover and the Lenovo Precision Pen 2 but – like Microsoft’s Surface 2-in-1s – expect to fork out additional cash in order to benefit from the greater versatility these extras bring.

To Lenovo’s credit, the keyboard cover features a considered design that, thankfully, doesn’t feel like an afterthought. The level of fit and finish, and the materials used, complement the P11 Pro’s aesthetics; dressing the Tab in a grey woven fibre that works well against its bead-blasted metallic sheen.

Less of a case and more of a sandwich, the keyboard portion magnetically attaches to the pogo-pin connections along the Tab’s base and remains in place using yet more magnets; protecting the screen when not in use. The back cover also attaches magnetically but is cleverly designed, letting you use enough force to bend out the integrated hinged kickstand, without the whole thing simply coming off in your hand.

The keys offer a pleasing amount of travel and there’s also a responsive multi-touch trackpad on-hand, complete with dedicated keys that play nice with an Android user experience.

The main talking point of the P11 Pro is without question its 11.5in 2K OLED Dolby Vision-capable display.

Considering practically every previous Lenovo tablet has opted for an LCD panel of some sort, the change to both a superior display technology and a higher resolution means the viewing experience, by comparison, is worlds apart. The P11 Pro’s screen doles out richer colours and greater contrast with true blacks, resulting in visuals that are closer in quality to that of the aforementioned Tab S7 series.

The max 500nit brightness display offers great visibility, even outdoors, with reflectivity being the biggest challenge in such scenarios. Lenovo didn’t go so far as to drop in a high refresh rate experience – in the vein of Pro Motion as on Apple’s iPads – but despite not feeling quite as cutting-edge as a result, its absence will only really be felt by gamers.

Despite the optional keyboard cover, the display’s 16:10 aspect ratio pushes the needle towards entertainment over productivity, with the majority of videos you’re likely to watch on the Pro filling most of the screen. Those after a slate to use as a workhorse first and foremost may prefer the 3:2 arrangement favoured by Microsoft’s Surfaces.

The other key facet of the P11 Pro’s screen is its optional stylus support. When paired with the smart-looking Precision Pen 2, you get 4096 levels of pressure sensitivity, decent latency and the tablet comes pre-loaded with the likes of Wacom’s Bamboo Paper app.

The collective effect is a slate-and-pen combo that’s equipped to handle digital inking of the occasional sketch or the jotting down of a note or two, but while this setup might work as a basic artist’s tool or for rudimentary note-taking, the experience isn’t anywhere near as well-executed or refined as that of the Apple Pencil or even the pairing of Samsung Galaxy Tab and S Pen.

The entertainment focus is reinforced by the inclusion of a quad stereo speaker arrangement that doles out a surprising amount of detail throughout its range, complete with impressive bass response (considering the tablet’s thin profile) and clear stereo separation.

Overall loudness is respectable too, without fear of distortion at the top end, and while movies and shows are likely the best fit for the audio hardware on the P11 Pro, things don’t fall apart if you use it to play music or simply make and take voice/video calls via the likes of Zoom.

The caveat to the audio commendations here is the complete lack of a 3.5mm headphone jack. If you’re looking for a tablet to keep your child entertained in the back of the car or while you’re otherwise listening to something else (or just need some peace and quiet), the Lenovo might not be an ideal fit.

Unless you’ve also paid out for a pair of Bluetooth or USB-C headphones, any existing 3.5mm cans or buds will require an adapter, which on a tablet like this, seems like unnecessary hassle/cost.

It’s worth mentioning that some extra control is afforded to you via the Dolby Atmos app, but in order to benefit from full support for the technology, you need to know where to look, with only specific services like Tidal, offering compatible content.

Android as a tablet user experience doesn’t have the best track record – it’s terrible, in fact. For whatever reason, Google has always struggled to have Android translate to the larger, predominantly landscape orientation that most tablets accommodate and while strides are actively being made to improve the situation, there’s still clearly work to be done.

Android 10 (note, not the latest release of version 11) as it exists on the Tab P11 Pro operates in two states; the standard Android experience and what Lenovo calls ‘Productivity Mode’ which activates automatically when connecting the keyboard cover to the tablet, otherwise it can be manually switched on within the slate’s settings.

Productivity mode is essentially Lenovo’s attempt at “fixing” the Android tablet user experience by making it behave more like Windows or Mac OS. There’s a taskbar that shows running applications and newly-opened apps launch in floating windows that can be dragged around the screen; if you’ve encountered anything like Samsung’s DeX experience, Lenovo’s taken a similar approach here.

The issues that arise are partly as a result of Android’s own foibles as a tablet OS but some blame also lands on Lenovo’s shoulders. Collectively, while the concept is solid, some apps just don’t work well on an Android slate, either refusing to rotate, scaling incorrectly or simply bugging out in use.

There are also bugs and formatting issues that seem specific to productivity mode, which undermine the good intentions Lenovo clearly had with the feature.

Beyond its quirks, the P11 Pro is at least set-up out the box to operate as a family tablet, with child sign-up built into the initial setup process and the likes of the Google Kids app pre-installed.

The model tested also includes 4G LTE cellular connectivity – if you decide to pair it with a compatible SIM – which might appeal to those after a little light productivity on-the-go.

As for longevity, there’s an 8600mAh battery tucked away inside the P11 Pro’s thin frame. Lenovo promises up to 15 hours of use on a full charge, but as ever, tablet usage can vary wildly under real-world conditions, not to mention the Pro’s proclivity for media consumption will likely result in a shorter lifespan than stated.

In testing, the slate’s battery dropped 23% during a two-hour Zoom call, with the display fixed at 50% brightness. Factoring in microphone and camera usage on top of the display having to remain on would extend to a total of eight hours call time on a single charge, meaning Lenovo’s quoted maximum longevity doesn’t seem completely outlandish, if a little ambitious.

While the tablet comes bundled with a 20W USB-C charger, the device itself actually tops out at 18W fast charging, meaning 30 minutes plugged in fills the cells back up to around 25%, with a complete recharge taking approximately two hours and 15 minutes.

With all this in mind, the Lenovo Tab P11 Pro would likely see most users through a day of general use; checking emails, watching videos and allowing for some mild productivity, but likely won’t have the stones battery-wise to allow users to leave the charger at home.

In most cases, taking photos using a tablet is a technological faux pas, especially when there’s every chance the snappers on the phone in your pocket are likely to be markedly superior.

With the P11 Pro, Lenovo has slapped a surprising amount of sensors on both the front and back, with a pair of lenses on each side: dual 8Mp fixed focus cameras on the front and a 13Mp autofocus unit on the back, accompanied by a 5Mp fixed-focus module.

The front sensors are competent enough for video calls but shouldn’t be relied upon for Instagram-worthy selfies, while the rear camera system is functional in all but low light. There’s also a notable white balance shift when moving to the ultrawide sensor, which undermines its usefulness somewhat.

As part of the tablet’s “AI Experience Center” feature set, the dual front-facers should facilitate artificial background blur in supported apps during video calls, however, in practice, it was unclear how to even activate this feature, or discover which apps were compatible with it.

Video tops out at Full HD at 60fps, for those that are curious, with the whole setup’s most valuable asset being the integrated document-scanning mod – an unexciting but functional inclusion.

If you’re in the market for a solid media tablet, then Samsung’s more affordable Galaxy Tab offerings will likely fit the bill for less cash, while splashing out on the extra accessories would best be done with a more capable (although admittedly more expensive) slate, like Apple’s iPad Air or either entry in the Galaxy Tab S7 family.

If you’re not a fan of the alternatives, however, the Tab P11 Pro is available right now from Lenovo’s own website, although you’ll have to buy the accessories separately. Thankfully, Amazon has just started selling the bundle tested here, which includes the keyboard and pen for £599.99.

Lenovo has tried to position the Tab P11 Pro as its all-singing, all-dancing flagship slate and within the confines of the company’s other current tablets, it is certainly that, but against competitors from a wider net, its appeal becomes a little more niche.

Despite offering a feature set to facilitate entertainment, productivity and creative use, as well as serving itself up as a kid-friendly slate on the side, its natural strengths are unquestionably in media consumption first and foremost.

Pick up the Tab P11 Pro for its superb display, solid quad-speaker setup and its respectable battery life, but avoid it if you’re unprepared to deal with its problematic user experience quirks, weak stylus functionality and the added cost of the extra accessories that unlock its full potential.