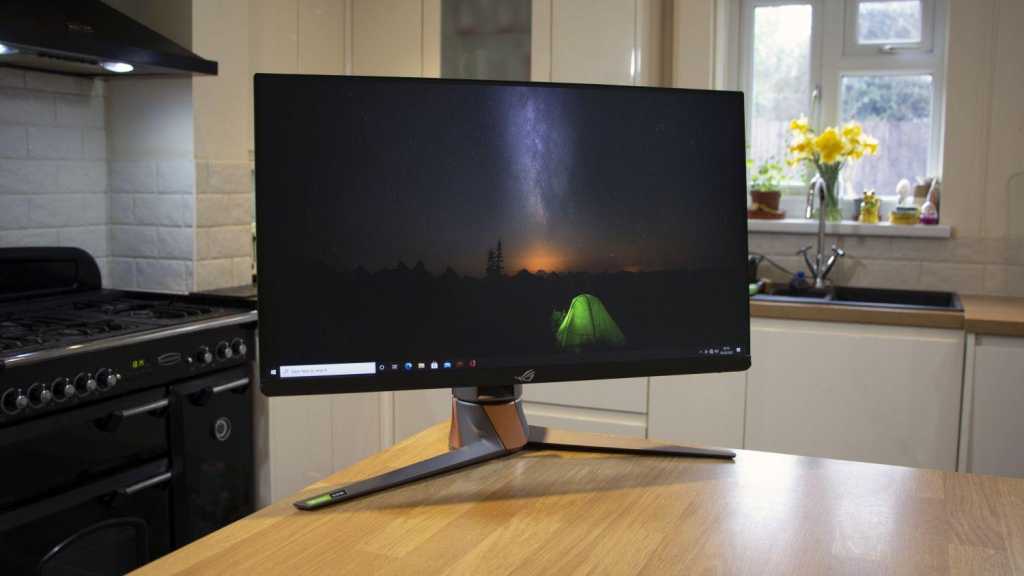 The Asus ROG Swift PG259QNR is the fastest gaming monitor on the planet, and it backs up the speed with solid quality, some smart features and robust design. If you’re a top-tier competitive player looking for every advantage, this is the display to get.

The Asus ROG Swift PG259QNR is a stunning flagship gaming monitor that serves up a monster 360Hz refresh rate alongside Nvidia G-Sync technology – on paper, that makes the Asus the fastest gaming monitor in the world.

That’s a great boast, but the Asus costs £799, so it’s not exactly cheap. It’s not exactly for everyone, either: the Swift takes aim at competitive eSports players who need every advantage possible.

Two versions of this display are available. The PG259QNR reviewed here is more expensive, and you can save £100 by opting for the PG259QN, which doesn’t include the display’s latency-checking module.

The ROG Swift PG259QNR emerges from the box with the stand already attached and the base is fitted with a couple of easy pre-installed screws. It’s one of the sturdiest displays I’ve used for ages – the metal stand is wide and stays firmly planted to your desk, and there’s hardly any wobbling when the screen is nudged. The stand is rock-solid and the plastic rear exhibits similar strength.

This is important because a screen like the PG259QNR is likely to be taken to lots of gaming events, so it needs to survive frequent transport.

It’s easy to adjust the PG259QNR. It’s got 120mm of height adjustment and it can be both tilted and swiveled. It swings around into portrait mode, too and supports 100mm VESA mounting. Asus also includes a desk clamp in the box.

The familiar Asus on-screen display menu is managed by a joystick and a quartet of buttons. It’s fast and functional, with sensible organisation and a handy display of key information.

The PG259QNR includes two USB ports and a headphone jack, but the USB ports are around the rear so they’re difficult to access. This screen also has no USB-C connectivity and no speakers, although most gamers will have their own speakers or a gaming headset anyway.

The 360Hz refresh rate is a stunning addition for competitive situations – means gameplay can be rendered with incredible speed, fluidity and clarity. This is a big deal for eSports, where a faster refresh rate means a competitive advantage and where milliseconds make the difference between winning and losing.

The PG259QNR uses Nvidia G-Sync, so those 360 frames per second are synchronized with your graphics card so there’s no tearing or stuttering. This display also works with AMD graphics cards too.

The included Nvidia Reflex Latency Analyzer measures the latency between your mouse, your PC and your display – in essence, the delay between clicking your mouse and the action taking place on the screen. The results are measured in milliseconds and this tool can highlight how PC hardware changes, a new mouse or display alterations can improve reaction times.

The rest of the PG259QNR’s specification is geared towards eSports. There’s a 1ms response time, which is superb and the underlying display is an IPS panel with 10-bit colour. The screen has a non-glare coating, too.

This display has a 1920×1080 resolution and a 24.5in diagonal size – it’s not curved. Those figures are not impressive but make sense for competition: the small size of this screen means players can see every corner without head movements, and the lower resolution means that more graphics cards will be able to handle 360fps gaming.

Nevertheless, you’ll need something like an RTX 3080 graphics card for most games and it’s imperative to have a good gaming CPU and fast memory too.

There are some feature areas where the PG259QNR is not as impressive. It doesn’t have Asus Extreme Low Motion Blur (ELMB), which uses backlight strobing with G-Sync to improve sharpness.

It does have Nvidia’s native Ultra Low Motion Blur technology, but that doesn’t work with G-Sync and only functions at fixed refresh rates of 144Hz or 240Hz. Those omissions are disappointing, but not a huge deal because at 360Hz there’s not a huge amount of motion-blurring that needs to be reduced.

There are a few other things to bear in mind with this display. While it does have DisplayPort and HDMI inputs, the HDMI port runs at a maximum refresh rate of 240Hz. Don’t expect this panel to be effective with HDR, either: while this display does support HDR10, its peak brightness of just over 400 nits and its lack of local dimming mean you don’t get a good improvement in HDR content.

There are several areas here where rival panels go further, albeit at the expense of eSports-friendly features. Take the Samsung Odyssey G7 – that panel is curved, available in larger 27in and 32in designs that cost £549 and £629 and it has a higher 2560×1440 Quad HD resolution and better HDR performance.

If you need peripherals, head here for the pick of the  best gaming mice.

The 360Hz refresh rate delivers spectacular performance, with unrivalled smoothness and fluidity in fast games like CS:GO, Fortnite and Overwatch, plus G-Sync means that performance is virtually flawless.

The difference between the more common 240Hz refresh rate and this 360Hz panel is noticeable, but it’s not transformative in the way that moving from 60Hz to 240Hz is.

Higher refresh rates deliver diminishing returns compared to those early jumps. As such, most gamers will still be sated by a 240Hz panel, while only the keenest eSports players will need the relatively slim advantage delivered by a 360Hz display.

Similarly, while the move to 360Hz improves latency, too, it’s another area where improvements are relatively slight.

The 1ms theoretical response time is only achievable in the panel’s Extreme overdrive mode – and in that mode there’s too much overshoot, which hampers visual clarity for the sake of a little more speed. In the display’s normal mode, the panel runs at around 2ms, which is still easily good enough for high-end competitive gaming, so that’s the option I’d recommend.

The underlying IPS panel is solid. Its peak brightness level of 413 nits is good enough for bright venue lights and the contrast ratio of 1,214:1 is high enough to provide good vibrancy and clarity for gaming.

The black level could be better, but that’s not ruinous. Viewing angles and uniformity are both excellent.

The colour temperature of 6,418K is superb and the average Delta E of 0.64 is top-notch, so you’re going to get accurate colours. The Asus rendered 99.3% of the sRGB colour gamut, so it’ll easily produce every shade required by mainstream games, but it only rendered 73% and 72% of the Adobe RGB and DCI-P3 gamuts. That’s disappointing, but also not important for competitive gameplay.

The Samsung G7 cannot compete when it comes to refresh rate – it peaks at 240Hz. But that panel does have its higher resolution and better ability when it comes to Adobe RGB and DCI-P3 rendering, so that’s a better option for single-player gameplay.

The Asus display costs £799 in the UK from the likes of Amazon and Overclockers and $799 at BestBuy in the US (also at Amazon), so it’s not exactly cheap if you want to buy the PG259QNR in its best specification.

There is an alternative if you don’t want to spend quite that much, though: the PG259QN is a version of this display without Asus’ innovative latency-checking module. That version of the display costs £699 or $699.

The Asus panel is widely available on both sides of the Atlantic, but if you can’t find it then you’re sadly out of luck when it comes to 360Hz monitors – this is the only gaming desktop display currently available at that refresh rate.

The best gaming alternative right now is the Samsung Odyssey G7, which is a 240Hz curved panel with stunning image quality. It’s available in 27in and 32in designs: the former has UK and US prices of £549 and $749. The latter, larger display costs £629 and $798.

Check out our chart of the best gaming monitors to see what else is available.

The Asus ROG Swift PG259QNR certainly won’t suit everyone thanks to its high price, limited size and low resolution.

However, the combination of a 360Hz refresh rate, Nvidia G-Sync and a superb response time mean that this is the fastest gaming monitor in the world right now.

The incredibly smooth, fast rendering is paired with tremendous build quality, a good on-screen display and solid image quality. This panel is an ideal companion for the most demanding eSports players like CS:GO and Fortnite.

It’s only those high-end players who will get the most from this display, gaining a significant advantage over a 240Hz panel.