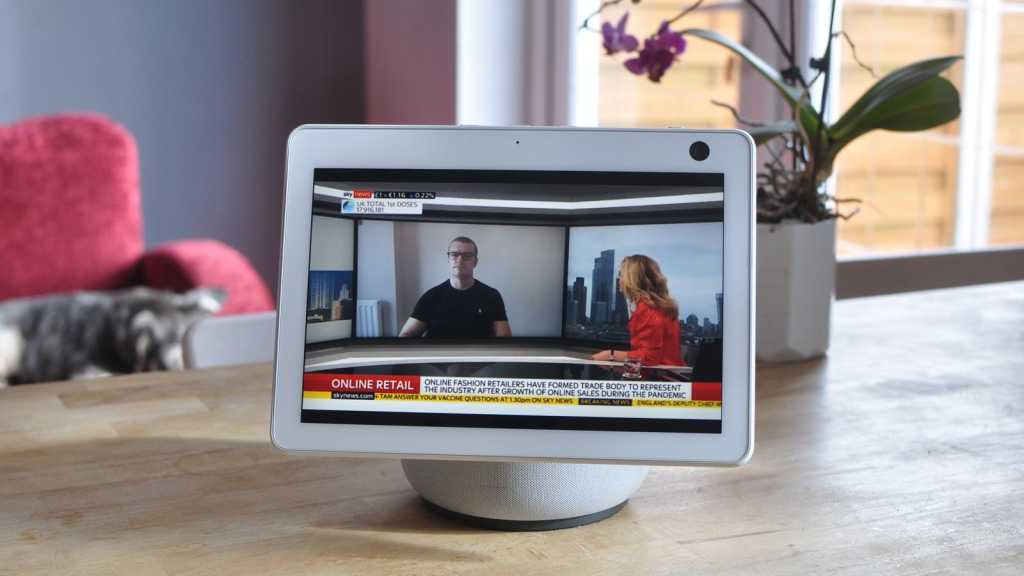 Motion really adds to the experience, making this the best Echo Show yet.

Right from the moment Amazon unveiled it, I’ve been itching to get my hands on the Echo Show 10. The company has remained tight-lipped about the fact it didn’t go on sale in 2020 as planned, but whatever the cause of the delay, it’s here now.

It also lives up to its promises of tracking (and therefore facing) you as you move around your room, and it does so inaudibly.

Design-wise, this is a complete departure from any previous Echo Show. It’s like a half-height Echo Studio with a Fire HD 10 tablet attached to it.

This motion, as Amazon calls it, can be used for various activities such as Alexa calling, watching videos, talking to Alexa, listening to music and other things. 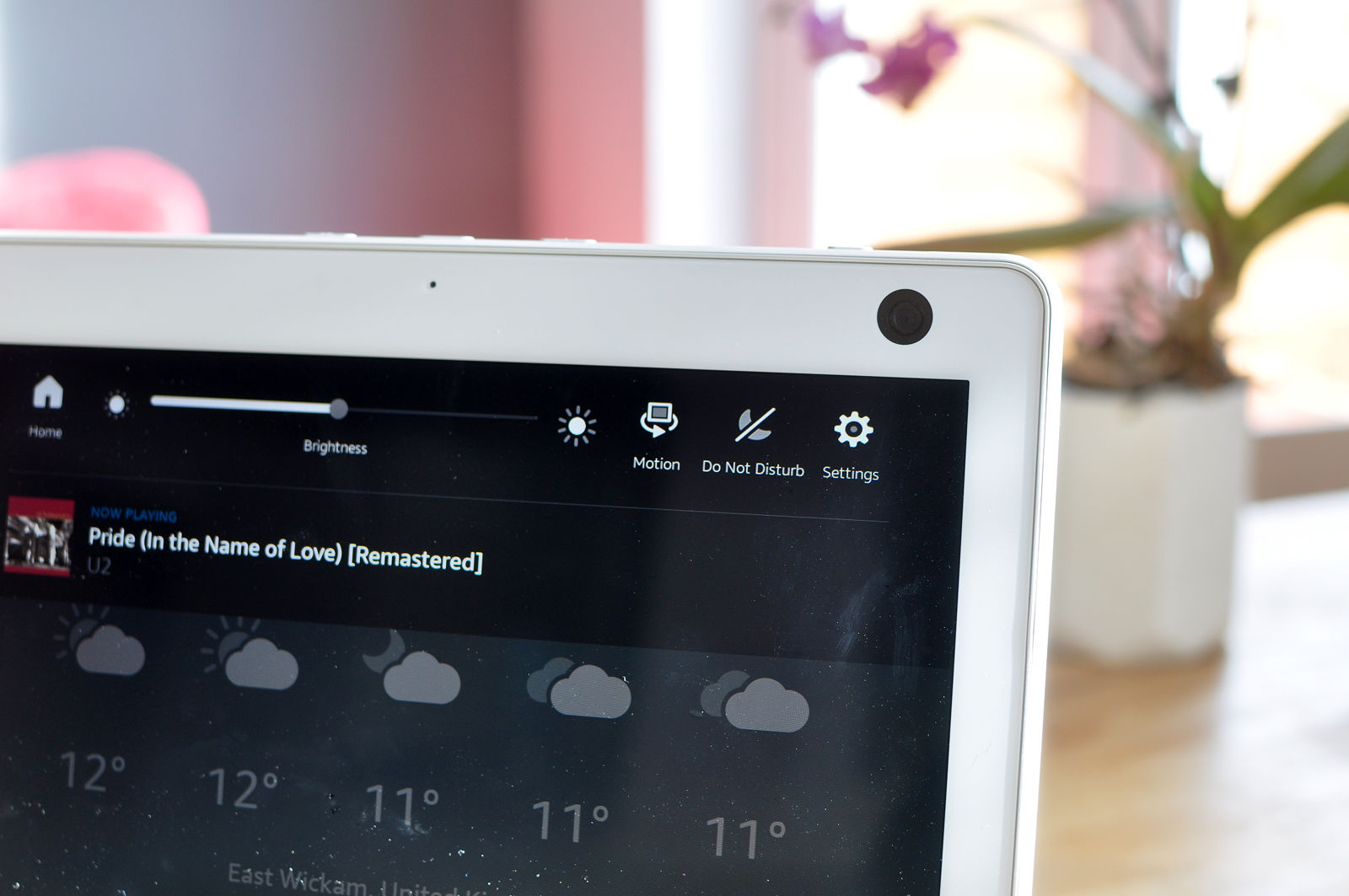 But you have full control: you can swipe down from the top of the screen and turn off motion at any time, and can choose your preferences for when you want the screen to move with you. As well as ‘During All Activites’ there are options for ‘During Select Activities’ (calling and multimedia) or ‘On Request’, which is when you say “Alexa, follow me”. 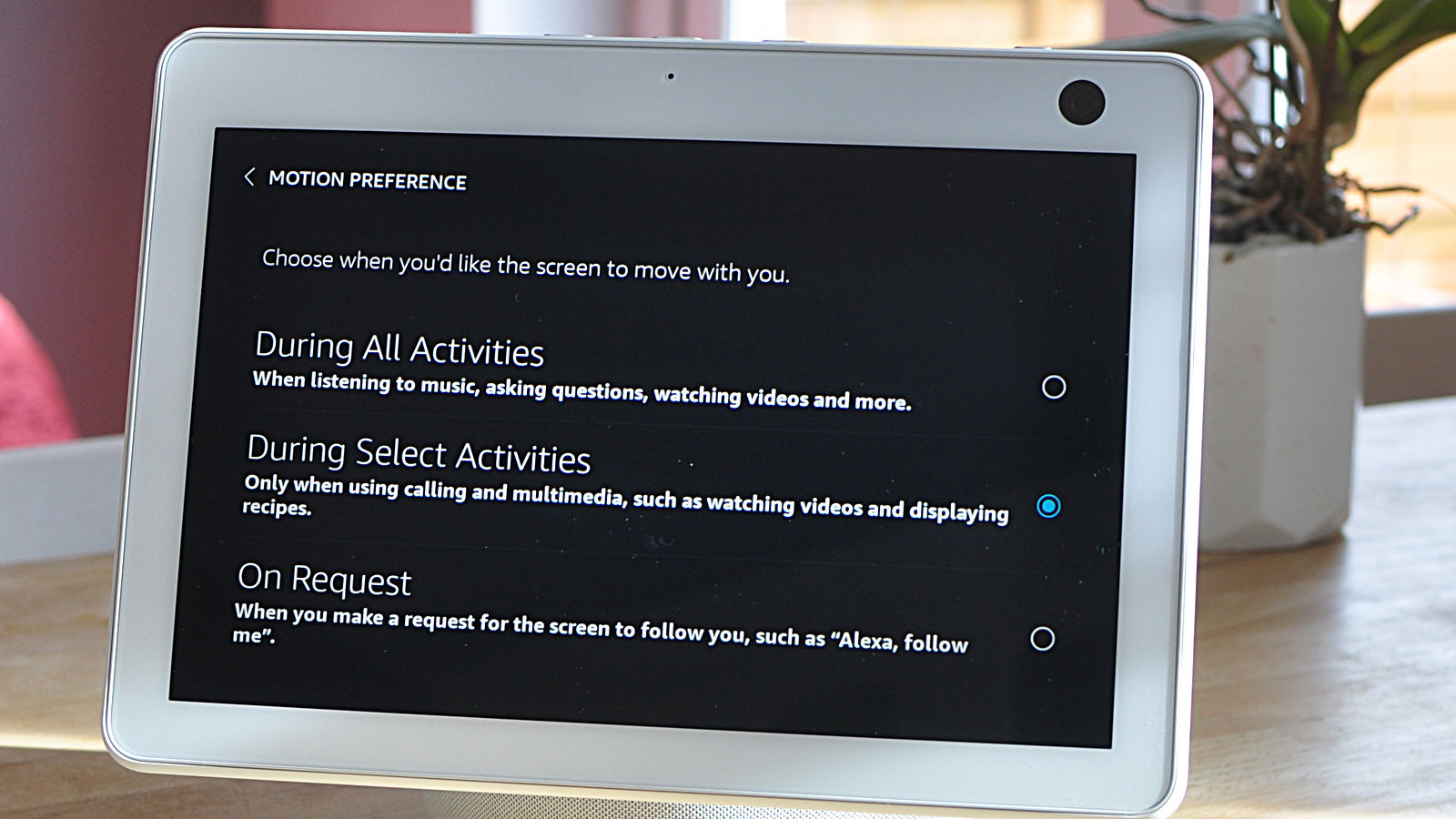 There’s an even easier way to disable motion: slide the camera shutter closed.

When you first plug in the Echo Show 10, or move it to a new location, it will map its range of motion and figure out where any obstacles are. You can adjust the angle it can turn in either direction using a slider on screen and also where it should face when it’s idle. 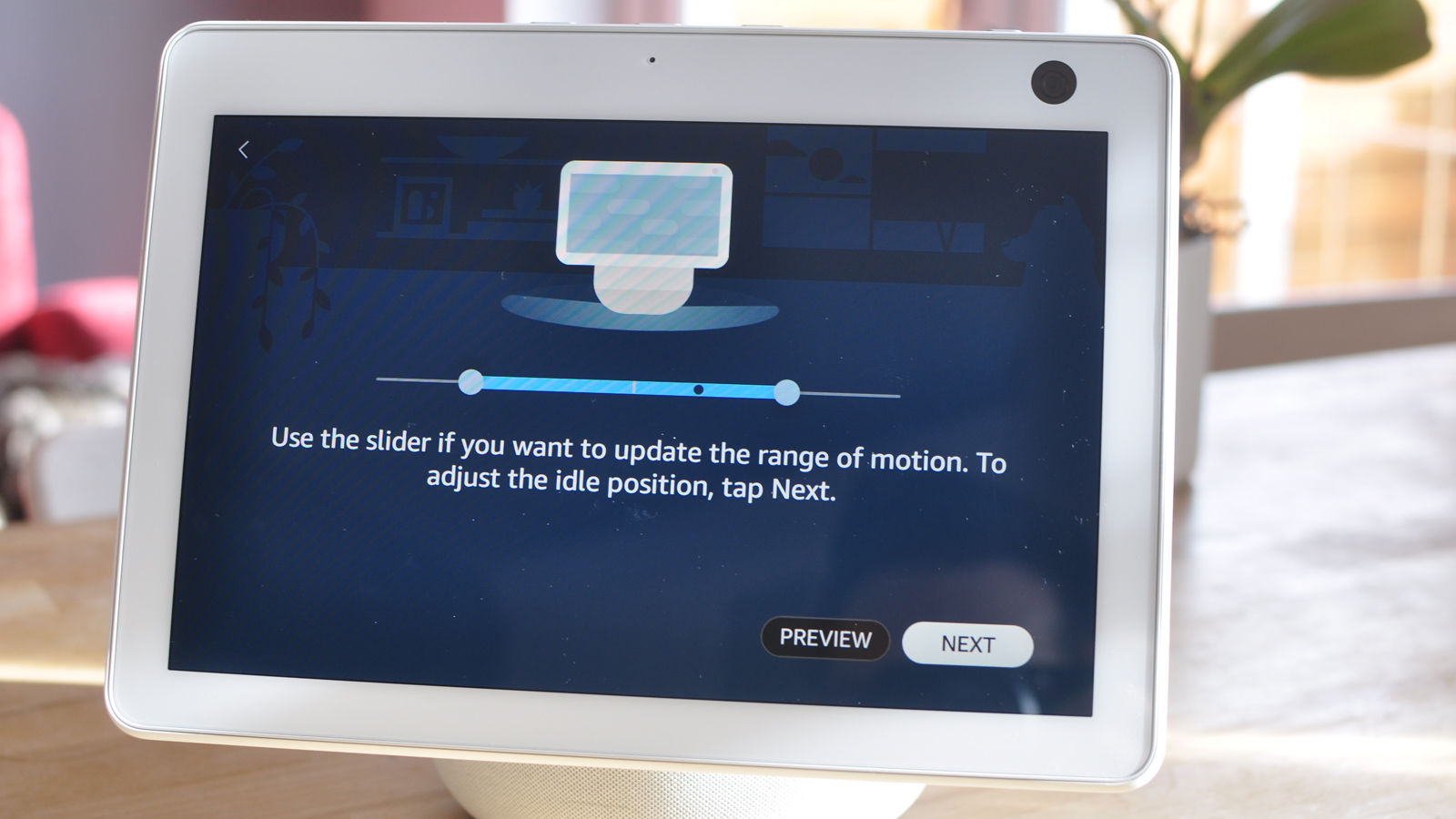 If someone puts down, say, a mug of tea and the screen bumps into it, it will stop and ask if the object is always there or not, and will update the mapping if you say it’s not just temporarily in the way.

You’ll see “Did I move correctly?” on screen from time to time as Alexa learns to follow you correctly.

You can also turn the screen with your hand, and there’s now tilt so you can adjust the angle up or down by around 45° to suit whether you’re sitting or standing.

Amazon says that it has worked hard on getting Alexa to move to face you as a real person would in a conversation and to ignore people walking behind you. In fact, it has set three ‘perception zones’ so it can decide whether to move with you or not.

The main one is the centre zone. As long as you stay in roughly same position, the screen won’t move even if you’re nodding or shaking your head. Second is the ‘holding zone’, an area outside centre. It uses this to avoid unnecessary movement if you, for example, just lean out of the frame to grab something quickly.

Then there is the ‘motion zone’ which is at the edges of the camera’s field of view. If you move to this zone, the screen will only move after a short delay. This is all designed to make the motion feel natural, and avoid too much movement.

It still takes a while to get used to it, and it certainly feels futuristic. Some may find it a bit creepy to start with, but they soon realise the benefits of a screen that always points at you. 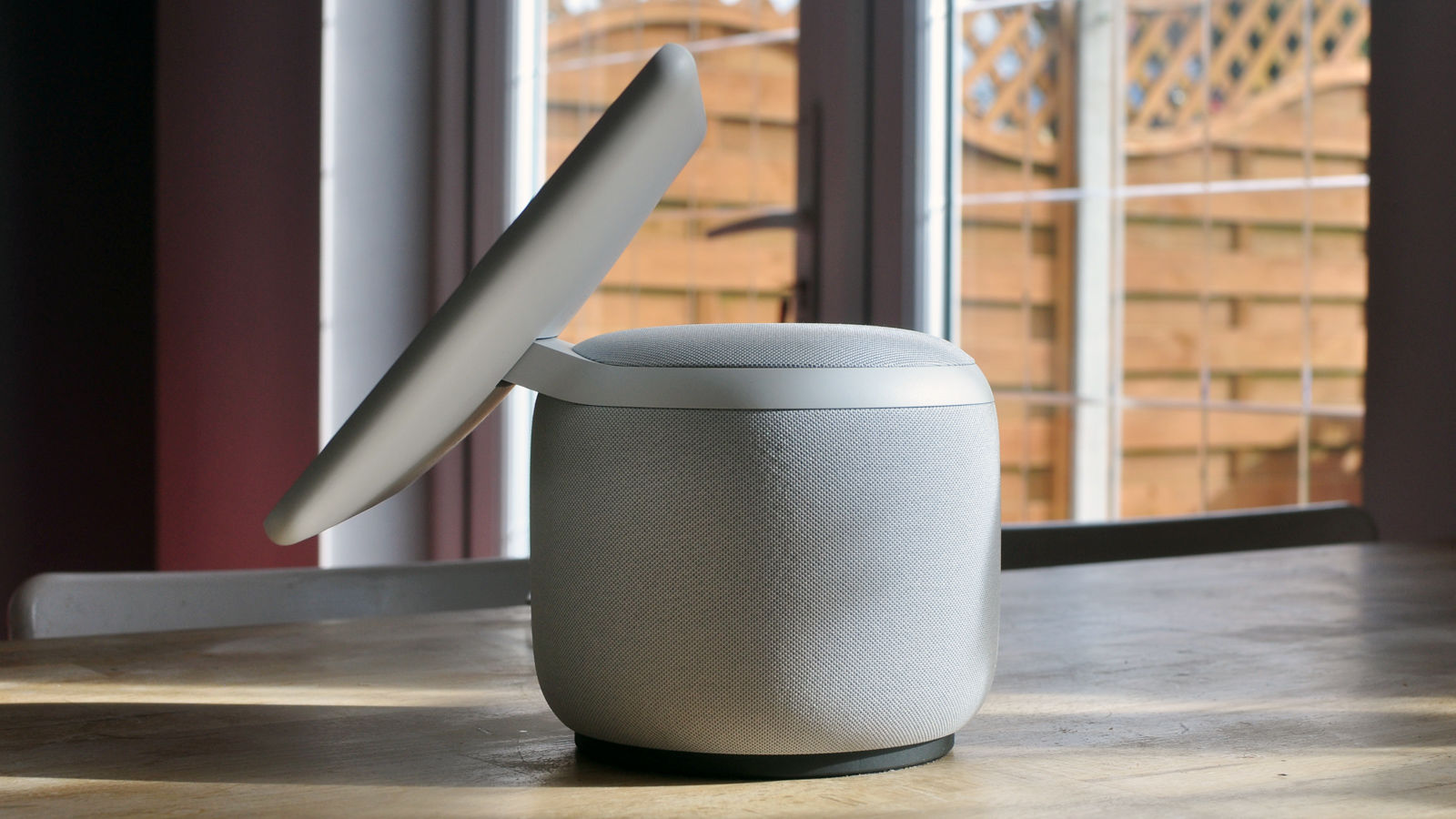 Better still, it isn’t just the screen that moves: the speakers do too, so they’re always pointing at you as well.

In testing, I found that tracking was generally reliable, but if there are multiple people in the room it can get confused and face the wrong person. Also, on a few occasions when the screen had to move through a large angle to face me it ended up not quite square on, as if looking over my shoulder. On asking Amazon about this, it said Alexa is always improving.

As well as group calling with up to seven friends or family, there are other video services. These vary from country to country so Zoom, for example, still isn’t an option for UK owners.

The 13Mp camera ensures you look nice and sharp, and that resolution is used to zoom in and focus on you. 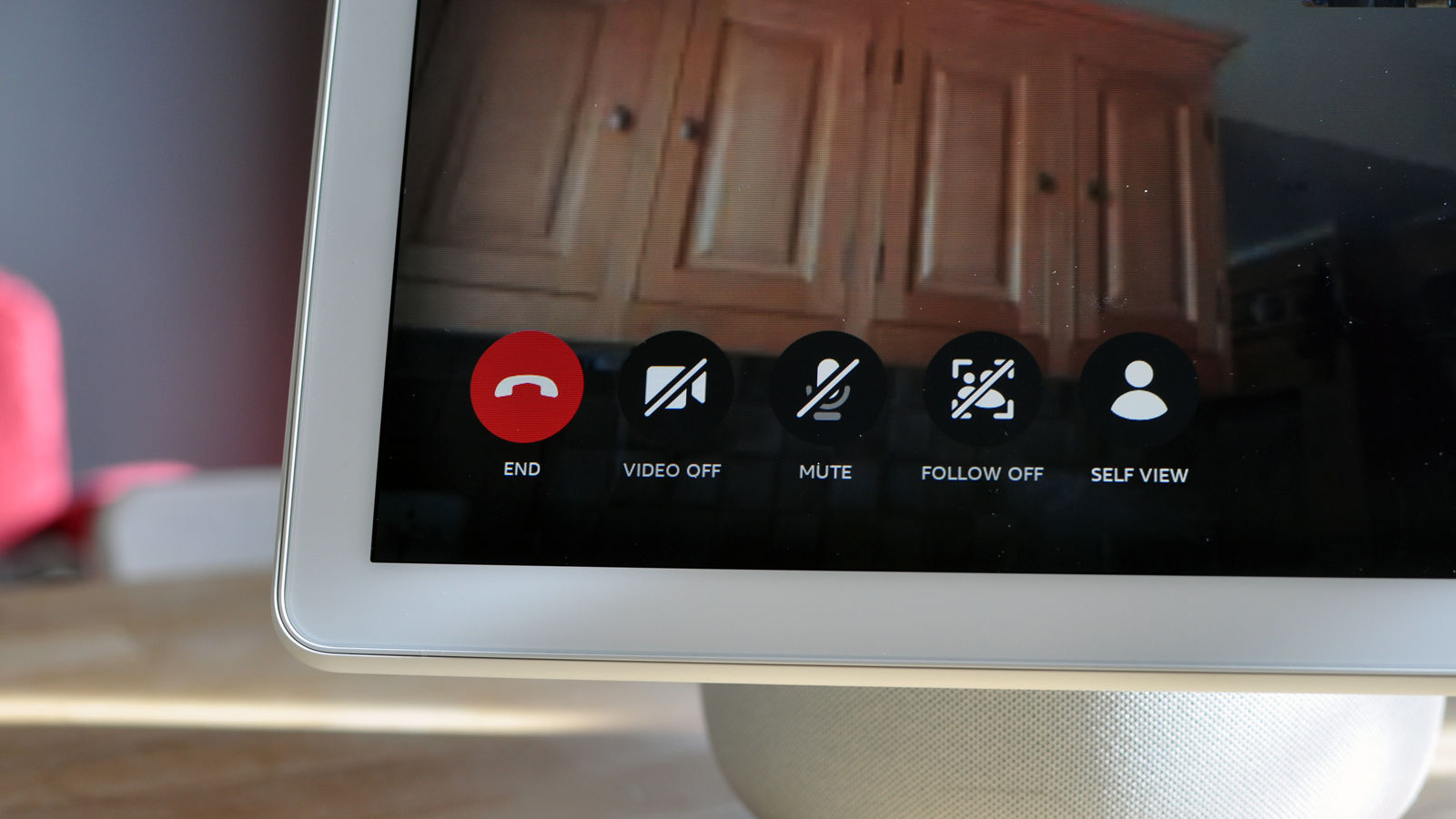 The options in the native Alexa calling service are confusing though, as they tell you what will happen when you tap them, not what the current setting is. Above, the camera, microphone and follow mode are enabled, but it’s easy to think they’re not.

In terms of video streaming services you can now get the proper Netflix experience on the Echo Show 10 (just as with other Echo Show model) and, of course, Amazon’s own Prime Video service. Ask Alexa to open YouTube and she’ll ask which web browser you want to use because, unlike Amazon’s Fire TV devices, the official YouTube app still isn’t available on the Echo Show. 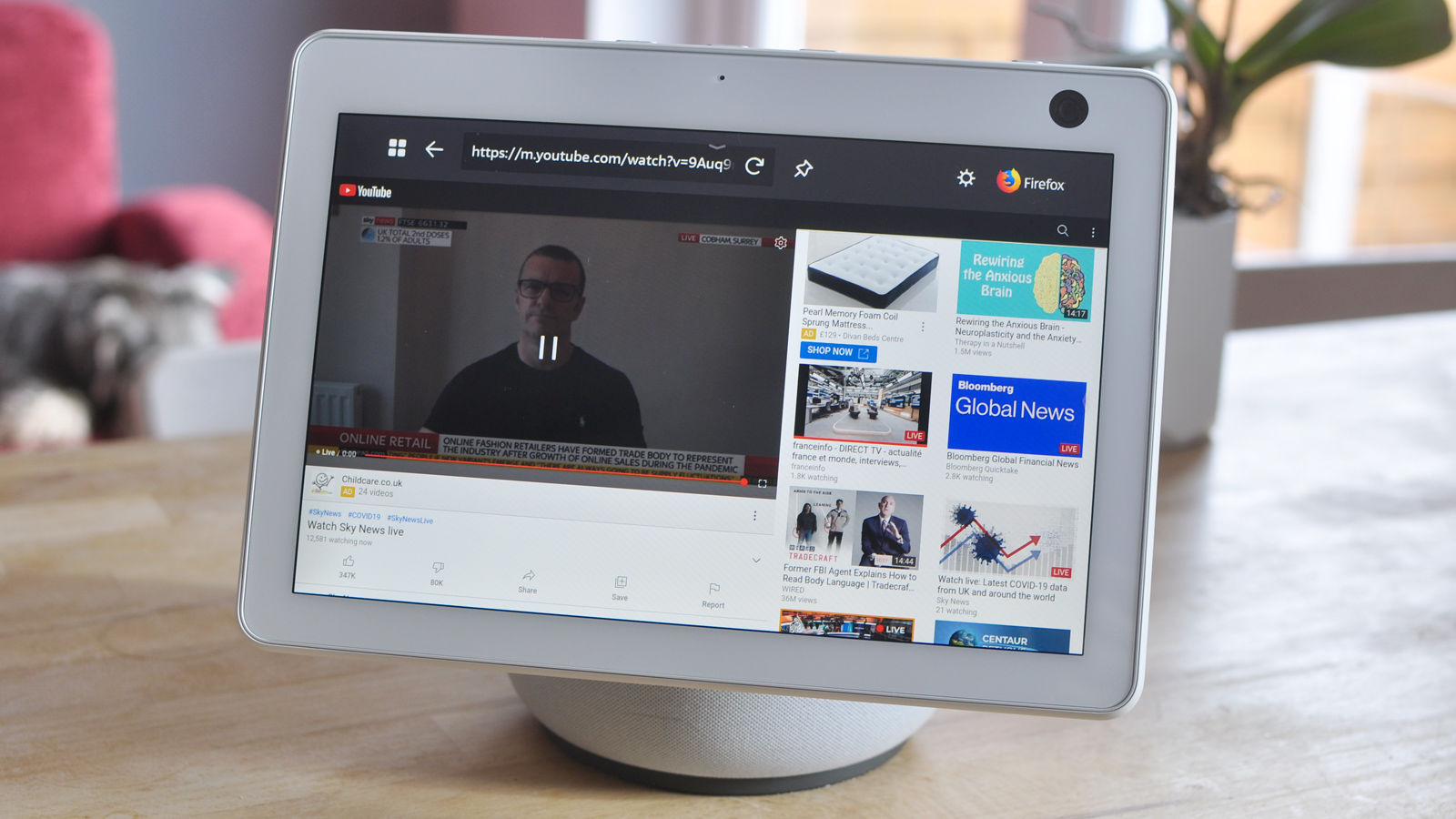 So you’ll have to make do with YouTube via Amazon Silk or Firefox, the two pre-installed browsers. The same applies to BBC iPlayer, except that Alexa can’t fire up the browser and navigate to the iPlayer website like she can with YouTube.

Plus, it uses the desktop versions of these websites, so it can be fiddly to use with your fingers: tapping the ‘full screen’ button in YouTube is a good example of this.

Don’t expect YouTube, iPlayer or other popular video services to be added natively as there’s every chance they won’t be: you can’t install apps on an Echo Show like a Fire TV.

The good news is that a lot of news services make their live streams available on YouTube so you can watch Sky News, on the Echo Show 10 without too much hassle. Not BBC News, but you can set BBC News as one of the elements in your Flash Briefing via the Alexa app.

Ultimately, don’t think of the Echo Show 10 as a self-contained Fire TV, but there’s still a good array of content to watch.

If you like seeing photos you’ve taken pop up, then you can use the Amazon Photos app to upload your phone’s camera roll. It’s not as good as Google Photos on a Nest Hub, but you can at least use the Echo Show 10 as a digital photo frame. It’s also possible to see Facebook photos and upload images from the Alexa app.

Considering the size of the speakers, the Echo Show 10 sounds great. Voices are very clear – lifelike – and music is handled admirably with nicely balanced bass and treble. Bass, in particular, is reined in compared to the second-gen Echo Show which was a little too bottom-heavy in the music department.

It’s no competitor to the Echo Studio, but it’s still respectable if you listen to a lot of music. It will also adapt sound to your room, just like the Studio.

If you’ve used an Echo Show, this will all be familiar. There are only minor changes to the home screen, and if you ask Alexa certain questions (such as “how many ounces are there in a pound?”) she will show the information overlaid on whatever you’re currently looking at, such as a recipe. 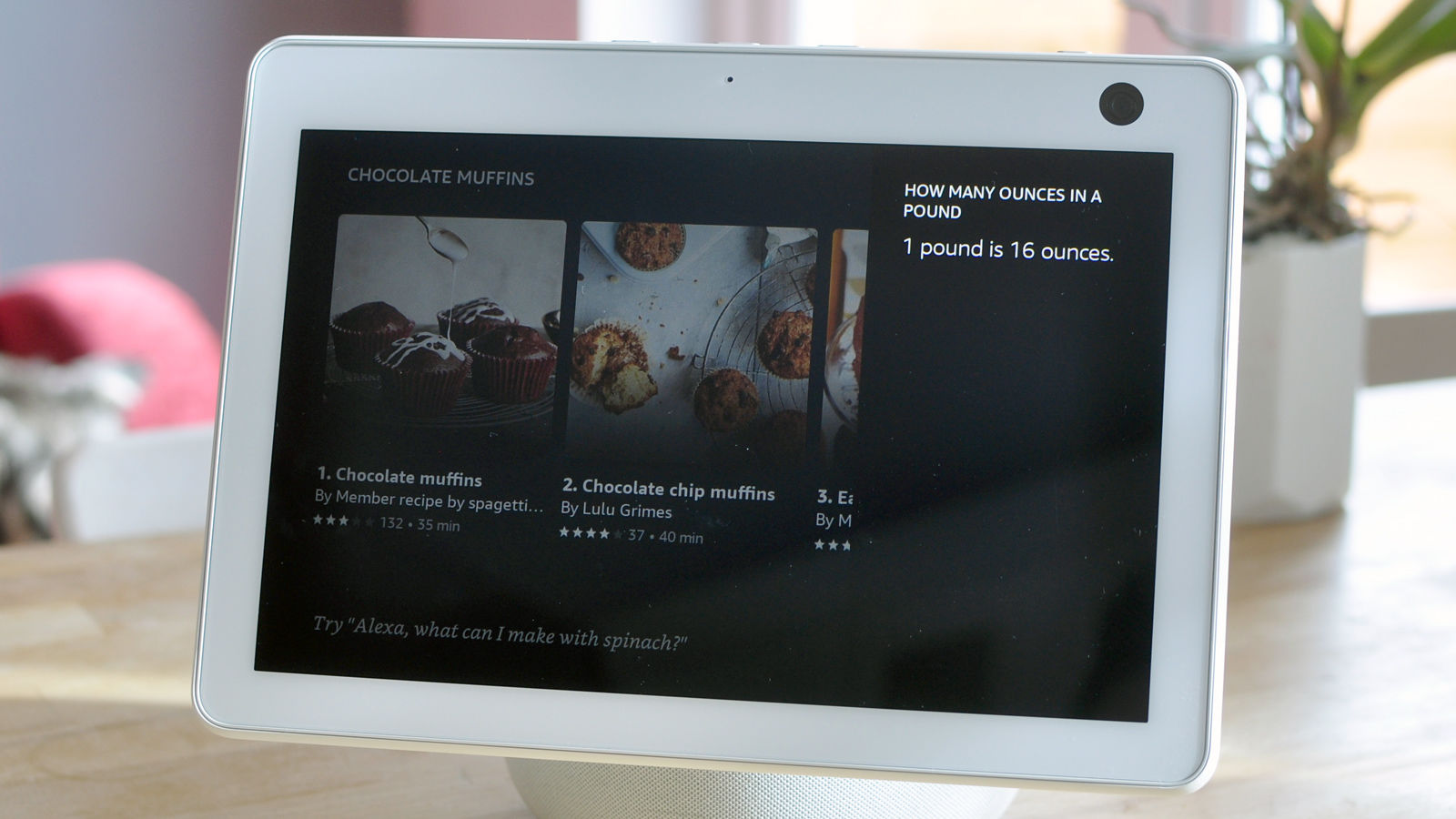 You won’t really touch the screen much as it’s quicker to ask Alexa to turn on the lights or show the video feed from the front door camera than it is to swipe in from the right-hand side, tap Smart Home and then try and find the device you want in the list.

I can’t see too many people using the Echo Show 10 in a bedroom, but as well as adaptive brightness, it also has a Sunrise Effect setting which will “display gradual, simili-sunrise lighting beginning 15 minutes before alarm set”. So, you can use it to help you wake up more gently in the mornings.

One of the extra benefits of the Echo Show 10’s rotation and camera is that you can use it to monitor your home like a smart security camera. In the Alexa app you can tap Devices > Cameras and then tap on the Echo Show 10.

You’ll see a live video feed and you can swipe left or right on it to turn the device in that direction.

Thanks to the mics and speakers, you can talk and listen to people in the room, just like many security cameras – these options are disabled by default and anyone at home will see a message saying someone is viewing the camera.  They can stop you watching, too. 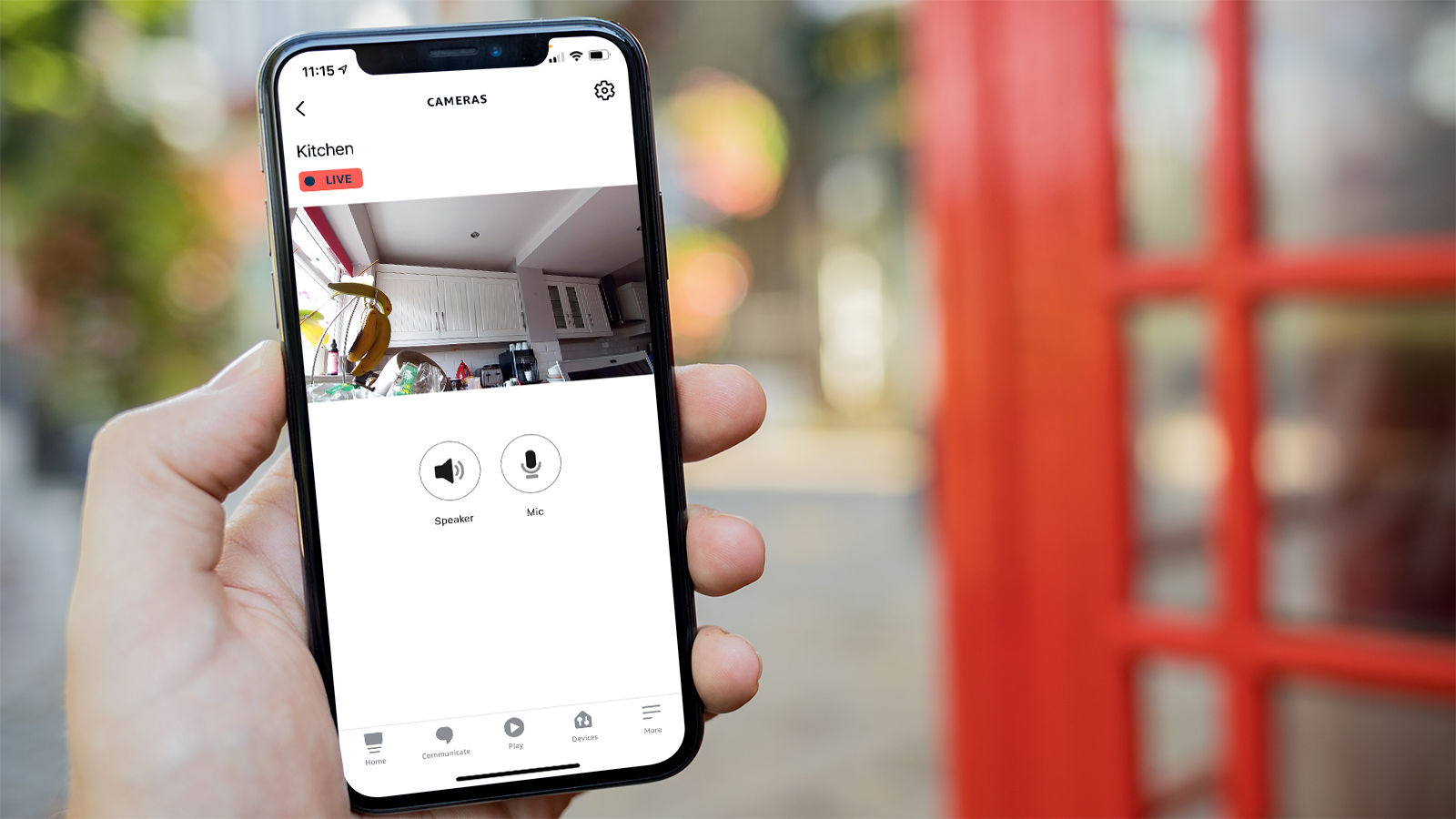 If you’re in the US, you get the bonus of Alexa Guard. With the Echo Show 10, this means you’ll get alerts if it hears the sound of smoke alarms, carbon monoxide alarms, or glass breaking, and will periodically sweep the room to look for human shapes, again alerting you if anyone is spotted.

Amazon is keen to point out that all the wizardry which enables Alexa to follow you is done on the device itself, including the audio location and computer vision. None of the information used to track you is saved even on the device itselfbeyond the end of the current tracking session either.

So if you leave the room or disable motion, that data is deleted.

It doesn’t use facial recognition, unlike the Google Nest Hub Max, so Alexa doesn’t know who you are except by your voice.

You can also more easily control the voice recordings Alexa keeps (and this applies to all Echo devices) by saying “Alexa, delete what I just said” or even “Alexa, delete everything I’ve ever said”.

Like the previous two 10-inch Echo Shows, this third-gen model has a built-in Zigbee hub which is handy if you have Zigbee smart home devices. If you don’t, it’s a feature you won’t notice.

And like other Echo (and Ring) devices, the Echo Show 10 will act as a Sidewalk hub, using another built-in radio for long-range communication. This is also of little interest in the UK: Amazon has only announced that it will roll out this new network in the US.

Look at the Echo Show 5 and 8 and you can’t help but think the Echo Show 10 is rather expensive. But the biggest Echo Show has always cost a lot more and, if anything, the fact this new model is only £20/$20 more expensive than the less-capable second-gen version is impressive.

You can buy one – in either black or white – from Amazon, and it goes on sale 25 February in the UK and US. White is great, but if you do plan to use it in a kitchen, the black version will hide the inevitable dirt better on the speaker fabric.

US buyers can add a Blink Mini camera for only $5 (normally $34.99) but there’s no pre-order or introductory deal in the UK.

You can see how the other Echo models compare in our separate guide to all Amazon Echo devices.

And if you want to see how alternatives from Google, Lenovo and other brands compare, read the best smart displays.

As it stands, the Echo Show 10 can’t quite do everything you might want it to, especially in the UK. Here, we’re still waiting for Zoom calls to arrive and there’s no Alexa Guard mode. Plus, this isn’t a the same as Amazon’s Fire TV: you have to watch YouTube, iPlayer and other unsupported video services via a web browser.

But, there is a lot to like: it sounds good, motion generally works well and you can do a lot with the Echo Show 10, whether following a recipe, listening to music (and following the lyrics on screen), checking the weather, controlling your smart home or using one of the thousands of Alexa skills.