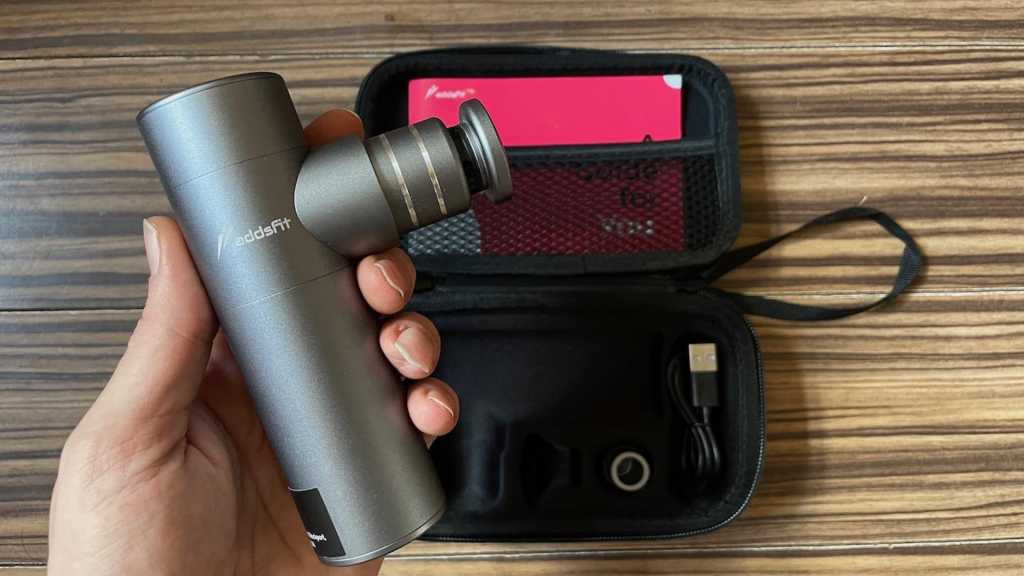 The Addsfit Mini is certainly portable, but with a 6mm amplitude and only two attachments in the box, there are more capable options at a similar price.

Massage guns are all the rage in 2021, with models coming in all shapes and sizes to help reduce muscle soreness, improve blood flow and help recovery after a workout. They often look a little intimidating for the uninitiated, especially given that most look like a power drill.

Price is often a barrier too, with premium brands such as Theragun charging over £500/$500 for the Theragun Pro.

There are more wallet-friendly options, though. Addsfit claims to offer the same core massage experience but at a much cheaper price point, with the portable Addsfit Mini coming in at £77/$105.

As the name suggests, the Mini is smaller than most massage guns, including Addsfit’s larger Max and Theragun’s Elite. It measures 129 x 40 x 104mm and weighs 360g, making it very lightweight. That means it’s easy to slip into a pocket or rucksack, handy for trips to the gym – whenever they become a thing again, anyway.

Its drill-esque form factor may look intimidating but it’s easy to hold in different positions, making it possible to get to those hard-to-reach places on your body. Though, not as easy as Theragun’s patented triangle-shaped grip.

The body is made from aluminium and there are just two included attachments. Where many alternatives use a softer head, Addsfit opted for pure aluminium to help “resist any bacteria that tries to attach to the surface”. However, without any antibacterial properties on offer from aluminium in general, the effect is likely to be minimal – it’s likely just a fancier way of being able to say, ‘it’s easy to wipe down’.

As you might imagine, the choice of material translates to a firm massage experience, especially when paired with the more intense thumb-like massage head at a higher power setting. The flatter, rounded head isn’t quite as daunting, and that’s likely the one you’ll be using most of the time – it’s designed for general use in all muscle groups across the body, while the other is for smaller areas of muscle.

When it comes to power levels, there are three rpms to choose from: 1600, 2500 and 3000rpm, each selected by a single button on the bottom of the massager. Other guns have + and – buttons, but at least the placement on the bottom means you won’t accidentally turn up the power mid-massage.

The range isn’t as great as the competition either, with the similarly priced Sportneer K1 Mini offering five modes up to 3500rpm, but you don’t need lots of speeds: you need effective ones.

It should be pretty obvious which power mode you’ve selected given the big jump in rpm between the three settings, but there’s also a strip of LEDs on the bottom to let you know which mode you’re in. Frankly, though, you won’t be using these, as it’s really only useful at the top setting.

That’s because, combined with a 6mm amplitude, it just doesn’t hammer your muscles the way a powerful massage gun does. Amplitude is the distance the attachment moves in and out, and it’s a far cry from the 16mm you get with a Theragun.

What it means is that the Mini provides vibration of the skin rather than rapid hits of strong pressure into your muscle tissue.

That may not a dealbreaker for the average user wanting to loosen up muscles after a hard days’ working from home, but it’s not ideal if you want to work on deep tissue in particular. That’s where it could be worth paying the premium for one of the more capable massage guns available. Plus, if you think you can just press harder to get a deeper effect, the Mini will simply stop moving altogether, offering a maximum of just 27lbs of force.

In my testing I was using it mainly during warmups and after workouts to help aid recovery, rather than needing it for deep tissue or a specific ache that I want to address.

The flat, circular head was – as expected – the more useful of the two, offering a smooth, comfortable experience practically anywhere with muscle, although the downside is that you’ll occasionally hammer a bone – it wouldn’t be so bad if it was made from a softer material, but the aluminium can cause a bit of discomfort if you, for example, catch your spine when doing your neck and shoulders. In those situations, it’s probably better to get someone else to help. (This is also where the Sportneer’s Y-shaped attachments comes in useful).

Addsfit claims that the Mini is quiet enough to be used during calls and video chats, but that that’s simply not the case. It’s definitely audible, even at its lowest setting, and at its highest, you’ll be able to hear it from the next room. It’s not an irritating noise as such, but it’s definitely not ‘quiet’.

When it comes to battery life, Addsfit claims that you’ll get 400 minutes of use out of the 2,500mAh battery before needing a top-up via USB-C, although that’s likely at the lowest power setting – the battery will drain quicker as the power increases.

When it’s not in use, the Addsfit Mini is stored in a zip-up hard-shell case with cut-out slots for the massage gun, the two attachments and a pocket to store the USB-C charging cable. It’s a handy thing to have, allowing you to keep all the accessories and charging cable together ready for use.

The Addsfit Mini is available on Amazon in the UK for £99.99, but it’s cheaper if you go directly to Addsfit, costing only £77. Those in the US pay a little more at $105, and it’s also available directly via Addsfit and Amazon. That’s cheap, but it’s still more expensive than the Sportneer K1 Mini in the UK at £71.99/$119.99, and Sportneer’s option has more heads and more power too.

If you prioritise portability over everything else then the Addsfit Mini is a great lightweight option that’ll slip into a pocket or rucksack.

The massage experience is a largely satisfying one, but you can get more powerful guns with extra massage heads for a similar price, or even less.