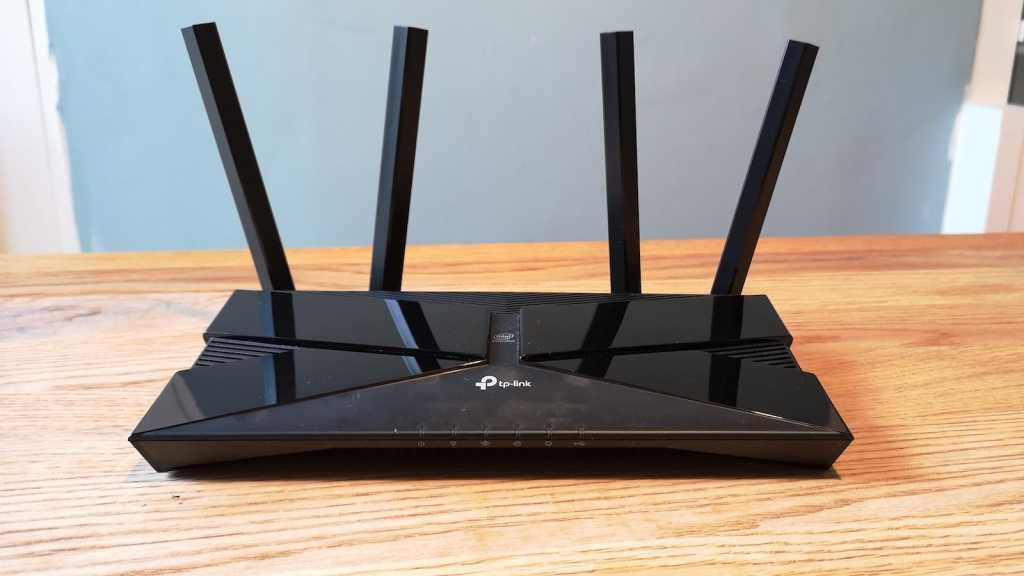 The TP-Link Archer AX50 (AX3000) is a Wi-Fi 6 router that promises a lot for a reasonable price, even if you can spend a lot less elsewhere.

There are some other refinements here too, like built-in TrendMicro-powered security software and performance tweaks allowing for more devices to connect to the router simultaneously. Just note that his doesn’t have a built-in modem so will need to be used in conjunction with one.

The TP-Link Archer AX50 is clad in a mixture of reflective and matt-finish black plastic and has quite a low, wide profile, measuring 38 x 260 x 135mm.

While such a wide router might not be convenient for everyone, the reason it’s a bit of a shelf space hog becomes apparent when you flip it over. At the back sit five Gigabit Ethernet ports – one WAN, four LAN – a USB 3.0 port, as well as four large adjustable antennae. These can be pushed back and forth as well as moved from side to side, should you want to move these around to improve reception.

That’s pretty good going considering the RRP – devices like the Honor Router 3 might be cheaper, but they’re a lot less generous in terms of wired connectivity.

Finally, the TP-Link Archer AX50 is a standalone router. There’s no modem built-in, so you’ll need to make sure you already have one of those, or you can put your ISP-supplied hardware into modem mode before connecting everything.

Setting up routers these days is generally an absolute breeze. Big brands like TP-Link have made the process a doddle thanks to handy apps like TP-Link Tether (iOS, Android), which provides detailed, step-by-step instructions and acts as a mobile control panel once you’ve finished.

From making sure you turn off the modem, after connecting the router to the mains and hooking it up via the WAN port, to naming the SSID, the set-up process gets everything ready for you to start connecting everything and get going.

Once you’re up and running, you’re free to start tinkering with settings, like the HomeCare panel. This consists of QoS (Quality of Service), Parental Controls and Antivirus.

QoS lets you prioritise bandwidth to specific devices on your network, as well as certain types of traffic (such as streaming, gaming, or general web use). So if you know you want to stream a TV show on your iPad in the evening, ticking ‘streaming’ and ‘Thomas’s iPad’ here will see that activity prioritised.

QoS is by no means a feature that’s unique to the TP-Link Archer AX50 – lots of routers offer QoS – but the interface here is one of the better ones I’ve used.

Likewise, the Parental Controls panel here is quite good, as it comes with four age-specific content blocking categories pre-defined and is very easy to use. However, the content filter does not give you the ability to block individual websites – for something like this, you’ll need a dedicated security software package.

A nice addition is the Antivirus tool, which uses TrendMicro software to scan for threats and lets you quarantine a compromised device on your network, stopping it from infecting other devices. If you already have your own security software, you don’t have to use this, of course – it’s quite easy to disable.

Along with typical features like Guest Wi-Fi and IPv6, there are menus for TP-Link Cloud for buyers with TP-Link smart home cameras like the tpCamera, and an Alexa Skill, so you can talk to your Echo smart speakers and have Alexa make the TP-Link Archer AX50 do things like prioritise gaming traffic to your Xbox or read out the Guest Wi-Fi password.

While more and more phones and laptops with Wi-Fi 6 antennas are available now, it’s still a relatively new standard. Chances are, most devices in your home will likely have Wi-Fi 5 radios.

Using the Speed Pro Android app, and two client devices, one with Wi-Fi 5 and one with Wi-Fi 6 radios (a Huawei Mate 10 Pro and RealMe X50 Pro), I recorded a number of results taken at various locations throughout my two-up two-down house in south London, at various times of day – the results below are averages.

Sadly, I did not have a device HE160-compatible device to hand to see if you really can get 2402Mbps. The fastest link speeds I recorded were 1201Mbps, suggesting that with the right device, 2402Mbps should be achievable in the real world and isn’t just a lab conditions theoretical maximum.

As expected, there was a noticeable drop in both speed and link stability the further away I travelled from the TP-Link Archer AX50.

As it’s not intended to be a device providing whole-home coverage, this is fine. For greater coverage, you would want to consider investing in a powerline adapter or a mesh Wi-Fi network anyway. If you’re living in a two-bedroom apartment, the TP-Link Archer AX50 will probably be enough to suit your Wi-Fi needs.

Looking at the table, however, you can immediately see the benefits of investing in a Wi-Fi 6 router – not only do you benefit from faster speeds, but the signals are also stronger.

In the upstairs office and garden tests, both client devices would switch to the 2.4GHz band by default. As it happens, I simply could not connect to the 5GHz band, even when trying to do so manually, so while speeds are very high, the TP-Link AX50 is not great at penetrating walls using the higher frequency. That’s not uncommon, but I have had some success in getting 5GHz upstairs and in the garden in the past.

In the States you can pick up the Archer AX50 up for $150 at Amazon and BestBuy.

Check our chart of the best routers to see what other options you have.

TP-Link Archer AX50 represents great value for money, offering fast wireless speeds, good range and stability and a number of useful features baked in. Support for 160MHz-capable devices makes this a key consideration for Wi-Fi petrolheads on a budget.

It’s not designed to act as a parent node for a mesh Wi-Fi system, and while coverage is generally good, the Archer AX50 is not ideal for large homes – you’ll need something else to boost the signal, and/or invest in a network switch if you want to expand coverage.

If you’re in the market for a standalone Wi-Fi 6 router, however, and coverage is less of an immediate issue, then the TP-Link Archer AX50 is affordable, reliable, and powerful.