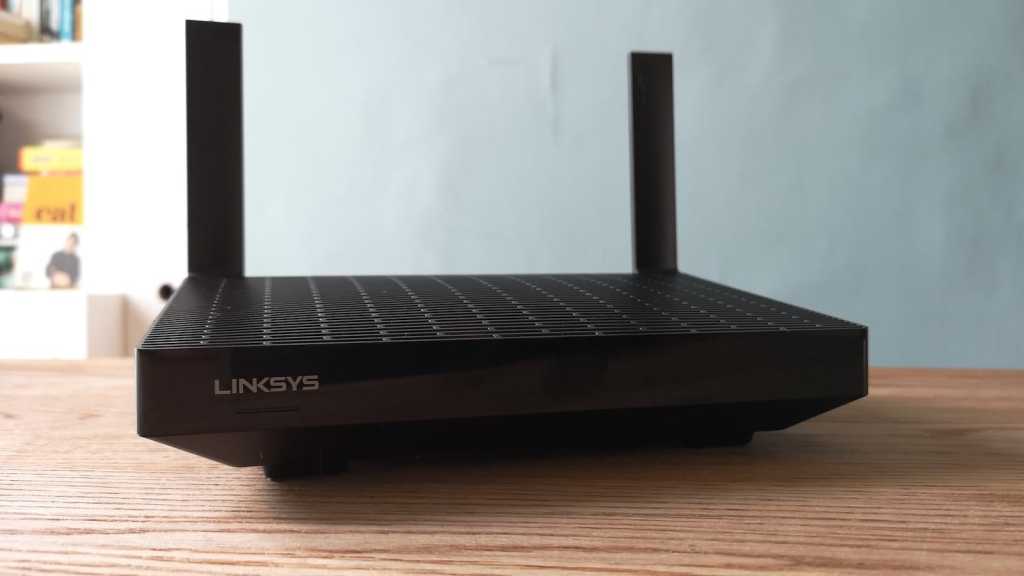 It doesn’t look like much, but the Linksys offers a well-rounded Wi-Fi 6 package here and can be turned into mesh with Velop devices.

Wi-Fi 6 is finally here – pretty much everything new hitting the shelves these days will feature a Wi-Fi 6-compliant antenna, which means faster and more reliable wireless speeds than before.

If you’re in the market for a new router to make better serve all these new devices, you’re spoiled for choice at the minute, as there are several Wi-Fi 6-ready routers on sale right now.

The Linksys MR7350 is one of the cheaper Wi-Fi 6 routers going, and on top of that, it’s also designed to work with Linksys’s Velop-branded mesh Wi-Fi satellites. It’s a compelling offer if you’re looking to get a whole-home system now, or a bit further down the line. Just note that it doesn’t have a built-in modem so will need to be used in conjunction with one.

The Linksys MR7350 is a fairly standard-looking router, in that it’s clad in angular black plastic, and looks ever so slightly angry. Its outer shell is a black plastic mesh which cleverly allows for warm air to radiate away from the bottom, sides, and top of the device. Two antennas which can be pushed back and laterally 90 degrees sit at the rear corners. These feel solid and sturdy.

The main plus about the MR7350’s design is that you get four Ethernet ports to play with here, plus a dedicated port for the modem connection and a USB 3.0 port for any network drives you want to attach.

A lot of Wi-Fi 6-ready devices at this price point I’ve tested recently have been a bit stingy on the Ethernet front, so it’s nice to report that the MR7350 is a bit more generous here. It’s a similar story with the TP-Link Archer AX50 with its four Gigabit LAN ports.

I really, really like the Netgear Nighthawk Mesh WiFi 6 System, for example. But, if I had to nitpick, my biggest gripe was that the main hub – i.e. the one that’s going to sit close to your modem – has only one spare Ethernet port.

I mention this mainly because the MR7350 is more than just a Wi-Fi 6 router, it’s been designed to play nicely with Linksys’s Velop mesh Wi-Fi network systems.

This means if you eventually want a mesh network that will give you whole-home coverage, but you’re undecided/can’t afford to splurge on a big set-up just yet, the MR7350 could be a stepping stone.

Alternatively, if you already have some older Velop devices, like the Wi-Fi 5-compliant WHW0100 models, then the MR7350 can slot right into your existing setup.

Setting up the Linksys MR7350 is simplicity itself thanks to detailed instructions on the Linksys app (iOS, Android). Alternatively, if you prefer to set things up the old-fashioned way, you can connect to the device via Ethernet and enter the IP address into a fresh browser window.

Most makers of home networking gear these days promise hassle-light set-up by way of slick-looking mobile apps and it’s nice to see that Linksys is no exception. The animated guides are clear and easy to follow without being too hand-holdy. One of the loading pages features a cute cat – always a plus.

Once you’ve connected the router to your modem, and you’ve turned that off and back on again, you should be set up in a matter of minutes.

The mobile apps do much of what you’d expect – they give you a quick overview of all of the devices on your network, fine-tune your home network by prioritising traffic for up to three devices, as well as port forwarding single IPs or a range of addresses.

You can also run an Ookla-powered speed test, useful if you feel like you’re not getting your money’s worth from your ISP.

That’s pretty typical of parental controls baked into routers, to be honest – if you want more control, you should look at getting a full security software suite – but it’s good to know that some family-friendly options are there.

Speaking of security, you can enable WPA3, if you have any devices which support it, as well as the standard WPA2 level of encryption. There’s also a mixed option, which supports WPA2 and 3 simultaneously – other routers with WPA3 support do so on an ‘all or nothing’ basis, so it’s nice to see Linksys acknowledging that not everything is WPA3 compliant just yet.

Lastly, you can also set up a temporary Guest Wi-Fi network if you have company and don’t fancy handing out your main Wi-Fi password.

While more and more phones and laptops with Wi-Fi 6 antennas are available now, it’s still a relatively new standard. Chances are, most devices in your home will likely have Wi-Fi 5 radios.

To test out the Linksys MR7350’s wireless prowess, I used the WiFi Speed Pro Android app, and two phones – a Huawei Mate 10 Pro and RealMe X50 Pro – with Wi-Fi 5 and Wi-Fi 6 radios, respectively.

I recorded link speeds at a number of distances across a two-storey terraced house in south London at various times of day. The results below are averages:

During the Wi-Fi 5 test, both routers had trouble providing stable connections in the harder-to-reach areas of the house. In both instances, the Super Hub 3 and MR7350 tried to maintain connections on the 2.4GHz radio frequency.

The MR7350 really didn’t want me to jump back on the 5GHz band when I was in the upstairs office, not that it mattered much anyway – I simply wasn’t able to get a good connection on either frequency in this room, which is located roughly 15 metres away, and one storey up from where the router was sat.

Other standalone routers I’ve tested don’t provide fantastic speeds here, but usually, I’m able to pick up a workable connection. Oddly, the spot I stand in in the garden is approximately 20 metres away from the router, and I could get a connection here on the 2.4GHz band just fine.

Using the RealMe X50 Pro, I not only recorded much faster speeds, but was able to get stable connections in a wider range of spaces. That said, I couldn’t get a decent signal in the garden on my trusty old Super Hub 3, even though I could (just about) with the older Huawei phone.

Obviously over time, as you acquire more and more Wi-Fi 6 devices, you’ll reap the benefits of having a Wi-Fi 6 router, which will give you greater speeds in more places, without the need for any extra devices.

That said, the advantages of picking a get a mesh Wi-Fi network, or some Powerline adapters should be obvious; you’ll have more access points doing the lifting for all your devices in the home, meaning less congestion, and less hassle.

Please note: for this review, the MR7350 has not been tested out with any Linksys Velop devices, so we cannot currently comment on how well this device works with others. We aim to update this portion of the review.

You can also pick it up from OnBuy for the RRP or Insight for £179.99 if Amazon runs out of stock.

Check our chart of the  best routers to see what other options you have.

The Linksys MR7350 offers buyers after a Wi-Fi 6 mesh network an interesting proposition.

On its own, it’s a very capable Wi-Fi 6 device that’s priced under £150. It’s also a bridgehead for Linksys Velop Wi-Fi satellites, so conceivably you could pick this up now, and grab some Velop hardware later on and grow your home network organically

Alternatively, you could replace your old Wi-Fi 5 router if you already have a Velop system at home.

As Linksys Velop satellites with Wi-Fi 6 start at £230, right off the bat, this does not compare quite as well on price as, say, the Eero system (although that’s not Wi-Fi 6-compliant), or the Netgear Nighthawk Mesh Wi-Fi 6 system (although you get far fewer Ethernet ports there).

While you don’t get a whole-home network system out of the box here, coverage is still pretty good. If whole-home Wi-Fi coverage is less of a dealbreaker – or you’re prepared to wait a bit before forking out for some Velop satellites – the Linksys MR73509 could be the router you’re looking for.