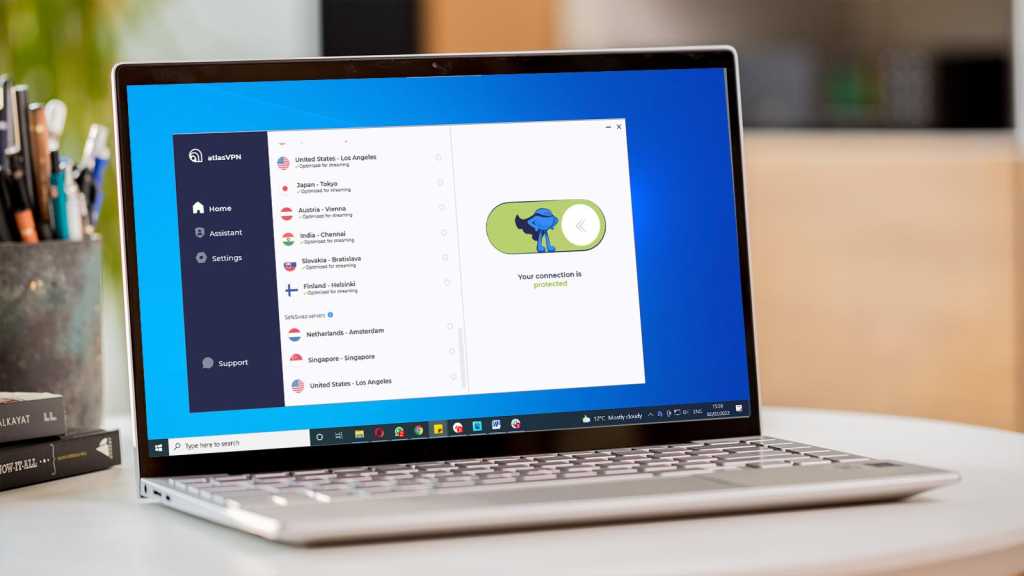 Atlas VPN is good value if you opt for the three-year deal, and now supports WireGuard. It’s pretty good for unblocking streaming services, but it’s not the ultimate choice if privacy is your top priority.

Atlas VPN is a relatively new VPN provider based in the USA. It’s owned by Nord Security, which also owns NordVPN and – now – Surfshark.

Atlas VPN is much more of a value offering, even than Surfshark. It also has a surprisingly capable free tier if you really don’t want to pay for a VPN.

But given its ‘freemium’ business model, plenty of features are kept locked away for customers paying for the Premium tier, such as the fastest speeds, most of the locations and servers and even the Amazon Fire TV and Android TV apps.

Originally, the free version had no bandwidth cap, but now it’s 10GB per month. (You get 2GB per day on the mobile apps, but that will soon change to the same 10GB monthly cap.)

This makes the Premium subscription – at £1.46 / $1.99 per month – seem like great value. That’s the price you’ll pay if you sign up and pay in advance for three years’ use. It’s just as expensive as most other VPN services if you pay on a rolling one-month contract.

As with all such subscriptions, you pay the whole lot upfront, but a £53 / $71 outlay for three years of VPN use is a very good deal. You can get that deal on Atlas VPN’s website.

VPNs aren’t all created the same, and in this review we’ll drill down into the various aspects of Atlas VPN to see exactly how it stacks up against the big names.

Many people want a VPN to stream video, such as watching shows on Netflix which aren’t available in your region. Atlas VPN Premium can do that, and will unblock many services including Disney+ and BBC iPlayer (we checked and they work). Plus, the company is fine with you using the service for P2P downloads, like torrent files.

You can’t access all Netflix regions though, as Atlas VPN’s server network covers around 31 countries with 750-ish servers. Since we last looked, servers have been added in Japan and a few other countries, but coverage is still strongest in Europe and weakest in Asia.

New are SafeSwap servers. Available locations for these are the US, Singapore and the Netherlands. Instead of assigning you just one IP address and sticking with it while the connection is active, SafeSwap regularly changes your IP address from the available pool, and this makes it even harder to identify you, which is good for privacy.

There are apps for Windows, macOS, Android and iOS, but no browser extensions: one for Chrome and browsers that use its engine is in the works. Note that browsers cannot establish VPN connections, so this is likely to be a simple proxy and not a VPN.

There are now Atlas VPN apps for Amazon’s Fire TV devices and Android TVs, and these can only be used by Premium subscribers.

You won’t find many options in the apps – they’re basic, but this also makes them pretty easy to use. Oddly, the server list in the Windows app isn’t in alphabetical order, but it is in the other versions.

Two newer features are the Data Breach Monitor and Tracker Blocker. The first monitors email addresses and notifies you if they ever appear on the dark web. This is an upgrade of the original ‘Data hack detection’ feature which let you check if a certain email address had been leaked in data breaches. That’s something you can get online for free from websites such as haveibeenpwned.com.

Oddly, the Data Breach Monitor allows you to enter any email address without verifying that you own it. Neither does check for any previous breaches: only future ones. That means you still need to use haveibeenpwned.com to see if you need to take any action (such as changing passwords) immediately.

Tracker Blocker – previously called SafeBrowse Plus – warns you of potentially dangerous websites, and also attempts to stop tracking cookies and other means of monitoring your behaviour online.

The phone apps are currently called Atlas VPN: Private Fast Proxy. However, they are proper VPN apps, not mere proxies. Proxy is simply used because that’s often what people search for on app stores.

What’s missing is any kind of split-tunnelling option so only some apps run via the VPN (Netflix, your bittorrent client etc). This option is only found in the Android app.

We’d also like the option to favourite servers. In the Windows and macOS apps, there isn’t even a ‘recent servers’ section. And there’s no way to see how busy each one is, and, for gamers, the ping.

Dark mode has been added, but only to the macOS and iOS apps so far.

Logging into the apps is only required if you’re a paying customer. Unfortunately, this is where we hit our first snag: instead of a password, you enter your email address to be sent sent a six-digit code. This can take a couple of minutes to arrive. Given this, a password would be preferable, but it does add a layer of security.

The good news is that there’s no limit on the number of devices you can use with Atlas VPN at the same time, unlike most VPNs which either force you to use just one device at a time or 5-10.

If you know anything about VPNs, you’ll know that they’re often registered in countries with favourable privacy laws, even if their actual offices are elsewhere. Altas VPN is based in the US where authorities can ask services to hand over whatever data they have.

This is why VPNs operate ‘no-logs’ policies so there’s no data to hand over. Atlas VPN says it doesn’t log any user data, but look at its privacy policy and you’ll see it does log some data.

Most is standard practice. In order to optimise and develop the service the company likes to know which servers people are using, roughly where they’re located in the world and what device they’re using to access it, which options they change in settings, etc. None of this is supposed to be personally identifiable: it’s anonymous.

The policy used to state that additional information was logged such as the date and time of connection and disconnection from the service. Fortunately that is no longer the case. The policy now reads “We are no-logs VPN: we do not collect your real IP address and we do not store any information that identifies what you browse, view, or do online via that VPN connection. The only information collected is basic analytics, to ensure great service to all our users.”.

Since Atlas VPN’s privacy policy hasn’t been audited, you’ll just have to take the company’s word for it, and that’s why its USA location is far from ideal.

However, if you’re just using a VPN to unblock videos, websites and for security on, say, hotel Wi-Fi, none of this matters. Anything that could get you in trouble with the law is another matter.

We tested Atlas VPN on a domestic ~70Mbps broadband line in the UK (with 18Mbps upload speeds). The results showed that connection times were usually swift and reliable.

A quick test of the Los Angeles server showed almost no slowdown, with a 66Mbps download speed. Even the connection to Japan ran at a fraction over 60Mbps.

As of yet, none of the independent test houses have added Atlas VPN to their roster, so we can’t say for sure how fast connections are using WireGuard. It’s unlikely to be as quick as NordVPN, but this is a budget VPN service.

Usefully, Atlas VPN has supported IPv6 from the get-go, meaning you’re protected from your real IP address being exposed even if you have an ISP that has already switched over from IPv4 (such as BT in the UK).

We found no DNS leaks in our tests either.

The connection dropped on a couple of occasions when using the Windows app and – strangely – the kill switch is no longer enabled by default.

Unblocking is pretty good: we were able to watch titles exclusive to Netflix Japan, as well as other regions plus shows on Disney+, Amazon Prime and BBC iPlayer.

Just recently Atlas VPN added 24/7 live chat for Premium subscribers. This is only available in a web browser when you’re logged into your Atlas VPN account, as opposed to in the apps themselves.

However, when we tested this, the response was immediate and technical questions were answered quickly and accurately.

Previously, if you needed help, you had to search the FAQ on Atlas VPN’s website, or submit a help request via email to support@atlasvpn.com.

You can’t really pay anonymously though, as the only options are PayPal, Google Pay and credit/debit cards.

Prices have gone up since the service first launched in 2019 when it was just £1 / $1.39 per month. And if you’re after an inexpensive VPN, it’s worth taking a look at our review of Ivacy.

It limits you to five devices, but has considerably more servers in roughly twice the number of locations and supports OpenVPN (but not yet WireGuard). It’s also based in Singapore,  which is a more privacy-friendly jurisdiction.

You can also see other recommendations in our roundup of the best VPN services.

Atlas VPN has come a long way in 12 months since we last tested it. Several of our criticisms have been addressed, from the connection logs to live chat and apps for Fire TV and Android TV.

The addition of WireGuard has improved connection speeds and – for many people – there are now servers in the locations they want, particularly if you’re after a VPN to unblock video streaming services.

And if that’s you, then you’re probably not bothered by the lack of advanced options in Atlas VPN’s apps, and won’t miss split-tunnelling or a web browser extension.