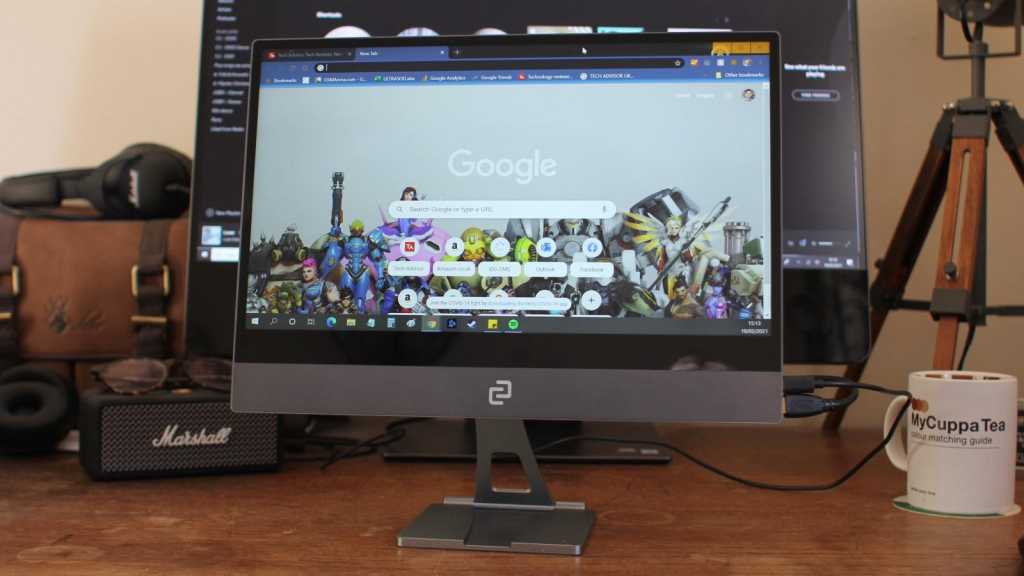 The Espresso Display looks amazing with its Apple-esque razor thin design and it has a decent enough panel. While Nintendo Switch support is nice, this system needs better accessories to be a true contender.

Portable monitors are getting more popular and new kid on the block, Espresso Displays, has what it claims to be the thinnest around. Following a successful crowdfunding campaign, the Espresso Display is now available to buy.

It comes in two sizes and I’ve taken a look at the larger 15.6in model here, complete with some of the accessories you’ll need to make the most out of the screen. A portable monitor can make you more productive – saving you up to 17.5 hours a week, according to the firm – and the Espresso Display even works with the Nintendo Switch when you want to relax.

Coming in at 5.4mm, the firm says the Espresso Display is the world’s thinnest portable monitor. It’s an impressive figure and while the Lenovo ThinkVision M14 measures just 4.4mm, that doesn’t include built-in kickstand.

The Espresso Display is completely flat and with its aeronautical grade aluminium case, looks very much like a premium tablet along the lines of an iPad. It’s extremely simple and stylish in design and easily the best looking we’ve seen so far at Tech Advisor – even with slightly bigger bezels some rivals.

Although the aluminium frame is solid, I did notice the corner of the display and the front silver panel lift a little at a corner so build quality is not perfect.

With such a simple design, there’s little to talk about other than two small buttons on the left, which sit above a headphone jack, and a trio of ports on the right which I’ll come to later.

So it’s beautiful, but is it functional?

With no built-in kickstand, you’re going to need to buy at least one accessory for the Espresso Display to make it useable. That is unless you’re happy to create some sort of makeshift stand for it.

To start with, I put the Espresso Display on the aptly named Mount (£59/US$69) – a compact aluminium stand with Z-shape dual-hinge design. Once I got my head round which way round it goes (the logo is upside down for some reason) the monitor attaches easily with magnets.

The result is an awesome looking sort of tiny iMac, but the Mount has a couple of issues. While the magnets keep things simple and also enable both landscape and portrait orientations, it’s too easy for the display to come off while making an adjustment.

The hinges need to be stiff enough to keep everything in place, but they don’t allow easy movement so it’s something of a fight. Even getting the stand in the right place, where you might rarely need to adjust it, there’s a second issue.

That is the way the Mount almost constantly wobbles in a small jelly-like vibration while typing or for a while after you put down a cup of tea on the desk. It’s incredibly distracting and meant I quickly swapped over to the FlipCase (£39/US$49).

This is similar to the one supplied with the Hannspree HT161CGB, although without a solid section to slot the display into. Instead, magnets once again hold things in place and once you figure out the correct way to fold it, it works really well with one half hiding a hinge so you can adjust the viewing angle.

For now, I’d recommend the FlipCase as Espresso tells me it’s working on an improved version of the Mount. Another option which I didn’t test is the Mount Pro (£39/US$49), which essentially attaches to a Vesa stand, then lets you attach the display with the magnets.

As mentioned earlier, the Espresso Display comes in two sizes: 13.3- and 15.6in. So, you can decide how much real-estate you need for a second screen, bearing in mind that the smaller one is more portable.

I’ve tested the larger size but the key specs remain the same so my testing should apply to both models. You get a Full HD resolution, 16 million colours and a brightness of 300 nits. Both come with touch-input as standard which in my testing works very well and you can also use a stylus.

Note that Mac users will need to install additional drivers to enable touch.

Despite that quote of 300 nits, I measured it at a peak of 189 nits with a SpyderX colourimeter. This should be fine for most indoor situations but isn’t ideal if it’s in direct sunlight or working outdoors.

The Espresso Display presented better figures when it comes to colour as it can achieve 93% of the sRGB gamut along with 75% P3 and 72% AdobeRGB. That’s fairly decent for anyone working with creative apps and need accuracy, although the ThinkVision M14 has slightly better figures.

You can adjust the brightness, but that’s the only control you get with no on-screen menu here. It’s not immediately obvious as the side buttons adjust volume so you have to long-press the down button to access brightness.

There are no modes for different tasks or a low blue light filter either, which you’ll find on many rivals.

The built-in speaker, like others, is not capable of much so should only be used if absolutely necessary. The headphone jack is likely a more useful inclusion here.

When it comes to connectivity, the Espresso Display matches the Hannspree with two USB-C ports as well as mini-HDMI. A trio of cables is supplied to help you get connected: USB-C to USB-C, USB-C to USB-A and mini-HDMI to HDMI.

Which ones you’ll need depend on what you are connecting. Devices with Thunderbolt 3 or DisplayPort Alt Mode will work with just the USB-C to USB-C cable. Others will need power, which is why the display has two USB-C ports. For laptops with one USB-C port, you’ll want to plug the power into that second port to keep your battery charged.

The Espresso Display is also compatible with selected phones, namely Samsung, Huawei and Apple, and also works with the Nintendo Switch without using its proper docking station. This is something the other portable monitors I’ve tested don’t support.

You can buy it directly or from Amazon, although the latter only has the 13in display at the time of writing.

The price at the cheaper end effectively matches the Lenovo ThinkVision M14, but the Hannspree HT161CGB is a little cheaper for anyone looking at the larger size. The Acer PM161Qbu is cheaper still if you’re on a tight budget.

However, remember that Espresso doesn’t include any of the accessories so you need to factor this in.

Check out our chart of the  best monitors.

There’s a lot to like about the Espresso Display starting with its luxurious and stylish design making it the best-looking portable monitor we’ve seen at Tech Advisor so far.

It’s also got good connectivity, supports the Nintendo Switch and has touch input as standard. The performance of the panel is good, too, with decent colour gamut even if brightness is below the quoted amount.

However, there are various downsides such as poor build quality in areas and a lack of any settings beyond brightness and volume.

The biggest problem is the magnet system which means the display easily comes off the Mount stand when making adjustments and wobbles while in use. The FlipCase is much better but neither is included in the price.