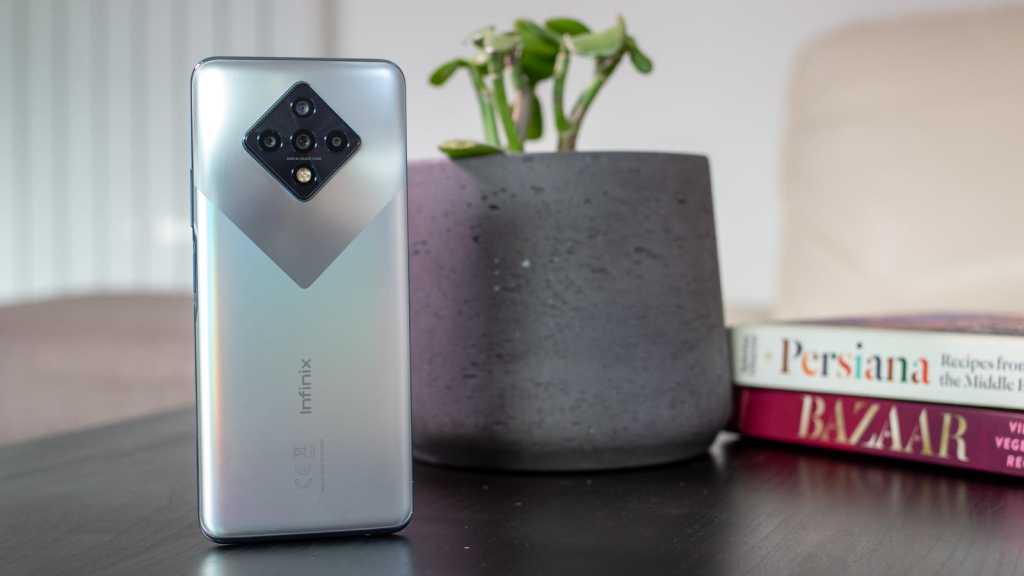 Solid hardware is let down by seriously frustrating software in the Infinix Zero 8. Performance, battery life, and charging are all strong, but none of that really matters when you factor in the bloated, ad-packed operating system. It makes the Zero 8 a constant frustration to use, and is alone reason enough to steer well clear.

You probably haven’t heard of Infinix, but the Hong Kong-based company has actually been making Android smartphones for the best part of a decade – they just haven’t launched in the UK or US.

Technically, the Infinix Zero 8 doesn’t buck that trend – you won’t find it in stores, or even on Amazon – the decision to promote the handset in the UK suggests that Infinix is ready to make a move on the English-language market.

And besides, at just over £200/$300, even with import fees the Zero 8 looks like a seriously competitive value offering. And on paper it is – but once you turn it on and dig into the messy software experience, the cut corners come into sharp relief.

First up, the Zero 8 is a fairly big phone, thanks mostly to a generous 6.85in display – that’s even bigger than the screen on the Galaxy S21 Ultra.

There’s a fairly heavy chin which makes the phone even bigger than it already sounds, and thick bezel around the rest of the phone, but only really by comparison to flagships. The screen is also interrupted by a dual-lens selfie camera cut-out in the top-left corner.

At 9.1mm thick and 205g the Zero 8 is also fairly chunky and heavy. Not unbearably so, but still – this is a lot of phone, and it feels like it.

Given the price, it shouldn’t come as much surprise that the body is mostly made of plastic though, with a design that’s striking but – to my eyes at least – looks a little cheap. Available in silver, black, or green, a ‘V’ effect separates the top and bottom halves of the rear, with slightly different reflective qualities to each half.

It doesn’t help that there’s a distractingly large camera module – a huge diamond in the middle of the phone that fits in four lenses and a flash. Like the rest of the rear design, it’s intended to grab attention, and I’ll leave it up to you whether that’s up your street or not.

In terms of the practical bits and pieces, there’s a fingerprint sensor built into the power button along the right-hand edge, with a USB-C port and (gasp) a headphone jack along the bottom. There’s no water-resistance rating though, so you’ll probably want to keep this one dry.

As I’ve already said, the display on the Zero 8 is big. But there’s more to it than that.

It’s an impressively bright display if nothing else – Infinix claims up to 480 nits, I can only confirm that it’s bright enough to hurt a bit if you stare at it for too long on full whack.

Colours are punchy if not jaw-dropping, and the 90Hz refresh rate keeps things smooth – with the option to drop to 60Hz or a dynamic refresh rate if you’d prefer to save battery.

Bottom line: this display is nothing special, but it’s solid enough, and perfectly competitive for the price.

So that’s the outside of the phone covered. Inside, Infinix has opted for the MediaTek Helio G90T – a mid-range chip that it’s paired with a generous 8GB of RAM and 128GB storage.

The result is surprisingly solid performance, with the Zero 8 matching our current favourite budget phones on benchmarks – the Poco X3 and Realme 7 – and beating some similarly priced rivals from the likes of Oppo, Samsung, and Motorola.

In terms of day-to-day performance I noticed the occasional bit of lag, or the need to restart a frozen app, but this was infrequent. For the most part, things run quickly and smoothly, and performance is one of the areas where Infinix really doesn’t seem to have compromised.

The 8GB RAM is an especially welcome touch – it’s higher than most rivals at this price, and should help the Zero 8 maintain strong performance into the future even through software updates.

The Zero 8 has an unusual camera setup, with a grand total of six lenses across the front and back.

The rear setup seems sensible enough at first. There’s a 64Mp main camera, backed up by an 8Mp ultrawide – nothing to see here.

Then you get to the other two lenses. Infinix says that both have 2Mp sensors, but won’t actually say what either is for. It stands to reason that one is a depth sensor, used for portrait mode; while it would be a good guess that the other is a macro lens, I can confirm from testing that it isn’t. My best guess is that this is simply the most egregious case yet of throwing extra lenses in to make up the marketing numbers, with no meaningful improvement to camera performance.

Let’s turn to the lenses that actually do something. The main 64Mp snapper actually isn’t half bad. With an aperture of f/1.89 it pixel bins down to 16Mp photos, and on the whole the results are decent. Colours are punchy and vibrant – if a little inconsistent, thanks in part to unreliable auto HDR – and it holds its own even in lower light conditions.

Details aren’t quite as rich as you’d expect from a 64Mp shooter, and if you look closely you’ll find a fair bit of noise. At a glance though, results are fine – it’s good enough for social media, even if it won’t meet professional standards.

The 8Mp ultrawide is a whole different story – it’s pretty awful. Detail drops off sharply, and the white balance and colours are totally different to the main lens, with an over-saturated effect – check out the snow shots in the slideshow below to see what I mean. This might deliver serviceable long-distance landscape shots, but for anything else it’s just not worth using.

In low light the wide-angle is almost unusable, so don’t bother. The main camera does a better job in night time shots, and better still with Night Mode on, which does an unusually good job of reducing noise, though compensates with a slight lack of sharpness and a tendency to over-expose nighttime scenes.

There’s a similar story on the front. The main selfie lens is a 48Mp, f/2.2 camera than pixel bins to 12Mp shots. It’s decent, if not spectacular, with crisp detail but some clear problems with dynamic range.

It’s joined by an 8Mp ultrawide and once again, it’s awful. The colours are off and there’s no next to no detail, with faces looking like they’ve been run through a smoothness filter. The field of view isn’t even that much wider than the main lens, reinforcing the sense that it’s only here so that Infinix can advertise the extra lens.

It presumably also helps with the selfie portrait mode, though given the results I wish it wouldn’t. Subject detection is poor, losing a chunk of my hair while including plenty of pavement that it shouldn’t – though the bokeh effect is fairly natural looking when it kicks in correctly. Portrait through the rear lenses fares better, but edge detection remains imperfect.

As for video, you can record up to 4K@30fps from both the front and rear cameras, with 60fps available if you drop to 1080p, at which point you’ll also get the benefit of electronic stabilisation.

A 4500mAh battery keeps the Zero 8 ticking along, and I’ve found that even with the 90Hz refresh rate locked on, the phone usually lasts two full days before needing to be plugged in.

That is of course with some slightly warped lockdown usage, where I’m on Wi-Fi almost all day and barely travelling at all. Even so, I’m confident that the Zero 8 would comfortably last a full day with more typical usage, which is really all you can ask for.

There’s no wireless charging, but 33W wired charging over USB-C is fast for the price – it topped the phone up to 73% in half an hour, from empty, which is one of the fastest charging speeds we’ve seen in any comparable budget phone.

If the specs so far make the Infinix Zero 8 sound like a solid option, then I’m afraid it’s the software that lets the phone down.

Not to put too fine a point on it, but this is the worst Android software experience I can remember having.

The Zero 8 runs Android 10, with Infinix’s XOS 7.0 on top. XOS isn’t too objectionable when it comes to functionality; it’s a little ugly, with an aesthetic similar to Oppo’s over-designed ColorOS, but it’s clear enough to navigate and manage device settings.

So what’s the problem?

Ads. Ads ads ads ads ads. As far as the eye can see. Infinix has not only packed the Zero 8 with bloatware apps – most of which can be uninstalled, but my god it would take you a while – but it takes every opportunity it can to advertise more apps you don’t want.

Ad notifications are a frequent occurrence, and cleverly split across multiple apps – so even if you tell the phone not to show notifications from one offender, there are several more that will keep spewing them forth. Even the app drawer has a row of ‘Instant App’ games right at the top before you get to your own software.

Much has been made recently of Apple and Samsung’s tendency to advertise new devices and services to users across devices they’ve paid for, but this is several degrees worse. As best as I can tell it’s also impossible to turn off entirely.

If you’ve paid money to own a device, you shouldn’t be forced to wade through adverts to use it – it’s that simple. This isn’t good enough.

As I’ve already said, the Infinix Zero 8 isn’t officially available in the UK, US, or most of Europe, but it’s easy enough to find online, with pricing around £200 or €225.

For the specs that seems like a steal, which makes more sense once you factor in the ad-laden software, which is no doubt subsidising the cost of the hardware.

There are loads of great budget phones available around this price; the Poco X3 NFC and Realme 7 are our current favourites. They’ll offer similar hardware, perhaps with some compromises, but the overall software experience is so superior that I’d always recommend them over the Zero 8.

Solid hardware is let down by seriously frustrating software in the Infinix Zero 8. Performance, battery life, and charging are all strong, and even the camera is respectable for the price – so at first, the poor secondary lenses and bulky design feel like the only real drawbacks.

However, none of that really matters when you factor in the bloated, ad-packed operating system. It makes the Zero 8 a constant frustration to use, and is alone reason enough to steer well clear.