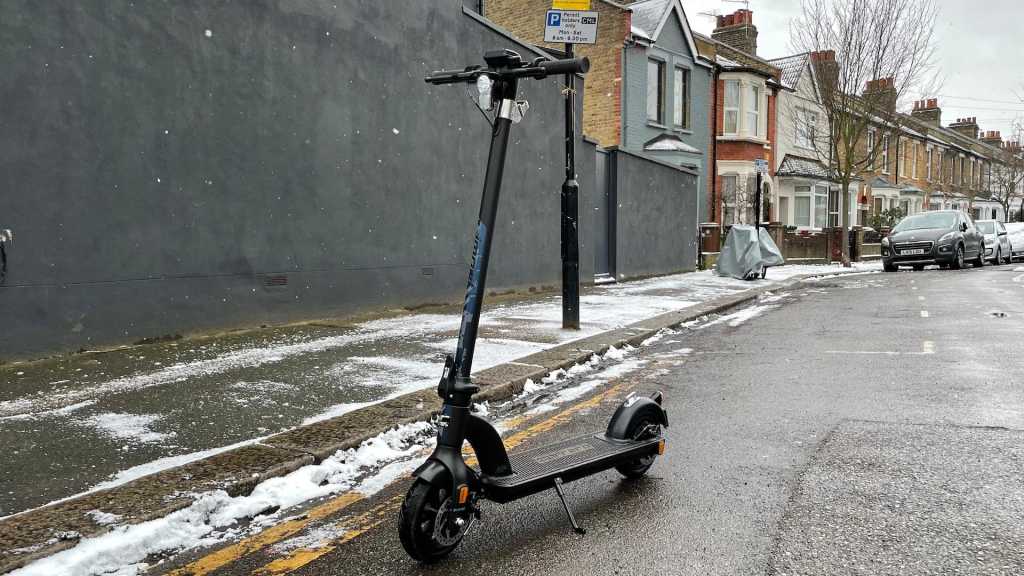 The Carerra impel is-1 is a nippy electric scooter with unique security-focused features including an immobiliser and built-in cable lock to deter potential thieves, and at £399, it’s cheaper than much of the competition.

Following on from the success of the Carerra Vengeance, Halfords-owned Carerra has taken its knowledge of bikes and transferred it to an electric scooter. The Carerra impel is-1 is the first electric scooter from the company, and despite being a little late to the electric scooter game, unique features and a competitive price tag means it’s a tempting option for those in the UK.

But is there enough on offer to tempt you away from more established brands in the electric scooter market like Xiaomi and Ninebot? I’ve spent some time with the Carerra impel is-1, and here’s what I think.

Before I go any further, I want to point out that it’s currently illegal to ride electric scooters on UK roads and pavements, and that they should only be used on private property with appropriate permission – although that could be changing soon. We cover more on UK electric scooter law separately for those interested.

The Carerra impel is-1 is your standard electric scooter in design, complete with wide handlebars, a large grippy footboard and the ability to fold down from its 120cm height down to 48cm, making it easier to store and transport in the boot of a car. There’s a dash of blue and grey styling that runs along the central stem to help differentiate it from the competition, and without much in the way of visible cabling, it’s tidier than the likes of the Reid E4. 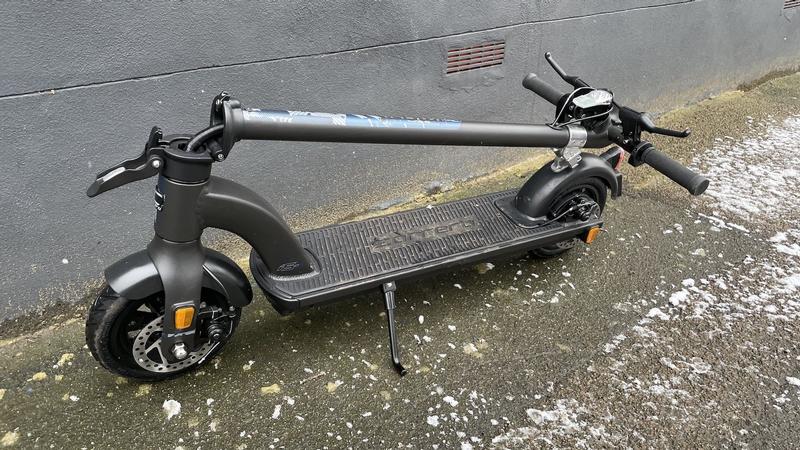 There is some heft there, weighing in at a cool 17kg, making the Impel IS-1 just 1kg lighter than the Ninebot Max G30, with just half the range available and smaller tyres too. It’s a mystery as to where that extra weight comes from, because it doesn’t strike you as a chunky scooter at a glance.

It’s not necessarily a dealbreaker, but it does mean it’ll be much harder to carry onto public transport and into buildings than lighter alternatives like the 12kg Kugoo Kirin S1.

You’ll find a large centrally placed display unit mounted onto the handlebars that provides you with current speed, battery life and speed mode at a glance. It’s big and bright enough to be used in daylight and at night without any complaints, but it’s worth pointing out that this will be your only source of riding data without a companion app available. 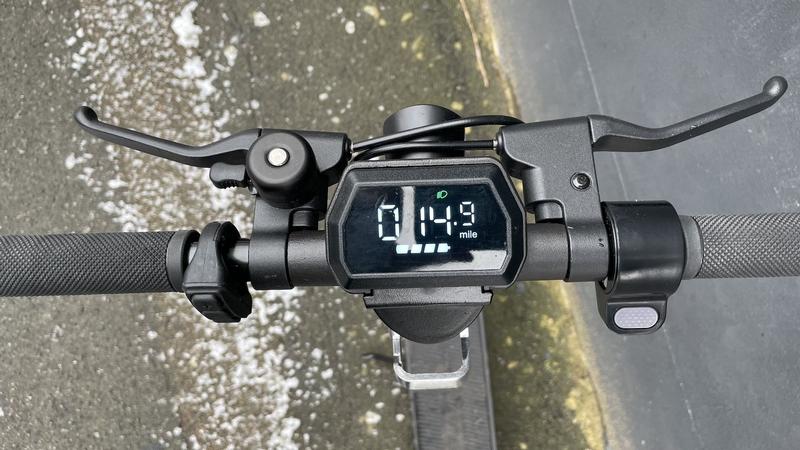 There’s also a thumb-sized accelerator throttle on the right, a small three-button control unit and a bell to alert others to your presence on the left and not one but two brake levers on the textured-grip handlebars. There is more going than usual, especially with dual brake levers and the small control unit, and there’s a good reason for this – but I’ll go into that a little later.

You’ll also find a bright LED headlight, controlled by holding the + button on the handlebars, along with front, rear and side reflectors and a working brake light to alert those around you when you’re slowing down, so you won’t struggle to see (or be seen) in darker areas.

There’s also a little space beneath the brake light on the rear for a number plate, just in case they ever become a requirement in the UK like with other countries around the world. 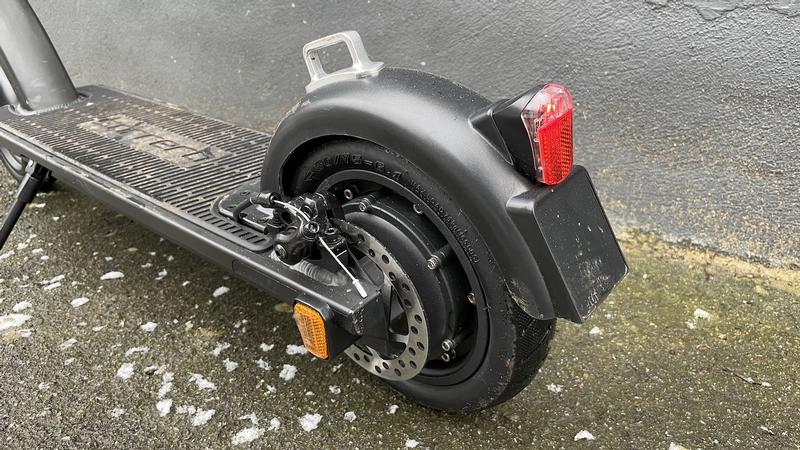 A focus on security

Where the Carrera impel is-1 differs itself from most of the competition is in terms of security – a hot topic when it comes to electric scooter that, let’s be honest, can be easily stolen. Other electric scooters implement software-based options that’ll sometimes flash or bleep, and while that will be a bit inconvenient for a potential thief, the new Carerra scooter takes things a step further.

For a start, it has a combination cable lock built right into the stem of the scooter, negating the need to carry around a separate lock when you want to use the scooter to quickly nip to the local takeaway – convenient, as well as safe. When you need to secure it, you simply pull the cable and it’ll unspool from within the scooter.

It is a thin cable, and even Halfords admits it’s more of a visual deterrent than a physical one as it could be easily cut with the correct tool, but at least it’d deter any chancers wandering by. 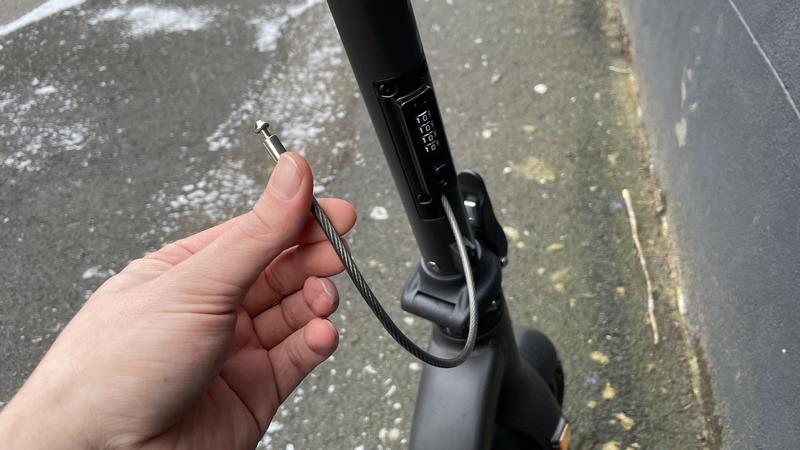 Even if it does get its cable cut, the Impel IS-1 has a built-in immobiliser that requires a three-digit pin to disable when you first turn the scooter on, selecting the numbers with the + and – buttons on the handlebar and using the power button to confirm. If you don’t enter the code, the scooter won’t start.

The security features won’t stop a dedicated thief from cutting the cable and carrying the scooter away, admittedly, but it’ll definitely make it more of an inconvenience than much of the scooter competition. And, if you don’t like the idea of having to enter a pin every time you turn the scooter on, you can simply disable the immobilisation feature altogether. 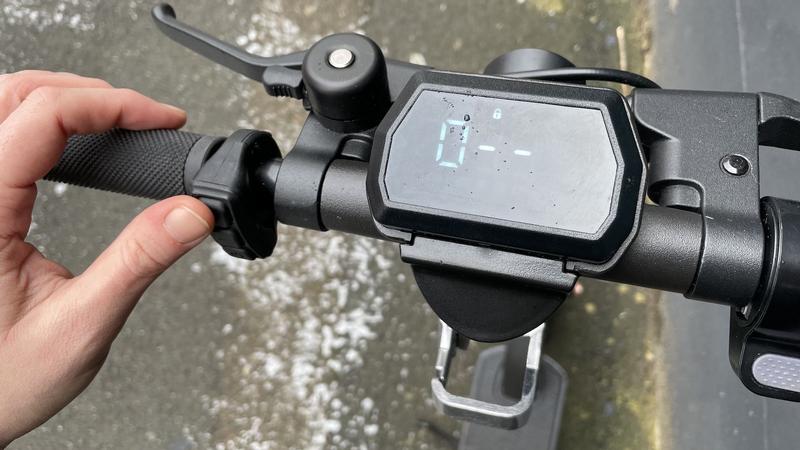 You’ll find a 350W motor at the heart of the Carerra impel is-1 that provides a snappy riding experience with four speed levels to choose from, ranging from a top speed of just 3.7mph at the low end and the full 15.5mph speed at the high end. It’s an absolute joy to ride with responsive acceleration, fast top speeds and great manoeuvrability that makes riding through small spaces a doddle.

There’s also a separate dedicated walking mode available, activated by holding the – button on the handlebar, allowing the scooter to keep pace with the average walking speed. It’s a handy feature if you’re riding and see somebody you want to catch up with, instead of awkwardly riding and braking or getting off the scooter entirely, but the fact that you have to hold the button the entire time does become inconvenient. The ability to press and hold the button to activate the walking mode, like an extra slow cruise control, would’ve been more desirable. 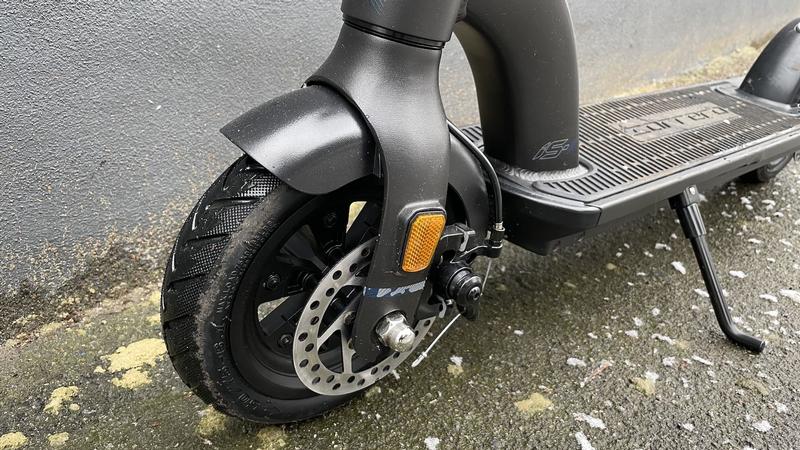 Regardless of how fast you’re going, you’ll be able to stop just as quickly thanks to the inclusion of dual braking system with brake pads on both the front and rear wheels and independent controls on the handlebars – a feature usually found on bikes, and another example of Halfords using its expertise of Carerra mountain bikes to improve the electric scooter experience.

It gives you not only more stopping power, but more of an ability to control your stop, making it less likely that you’ll become unbalanced in the event of an emergency. The brake pads are replaceable, like the brake cables, which makes for a nice change.

Of course, the inclusion of 8.5in tyres over larger 10in tyres featured on some alternatives mean it’s not quite as smooth a ride as it could be, but the fact that the scooter features air-filled pneumatic tyres rather than solid tyres mean there’s a bit more give when hitting bumps and uneven surfaces. 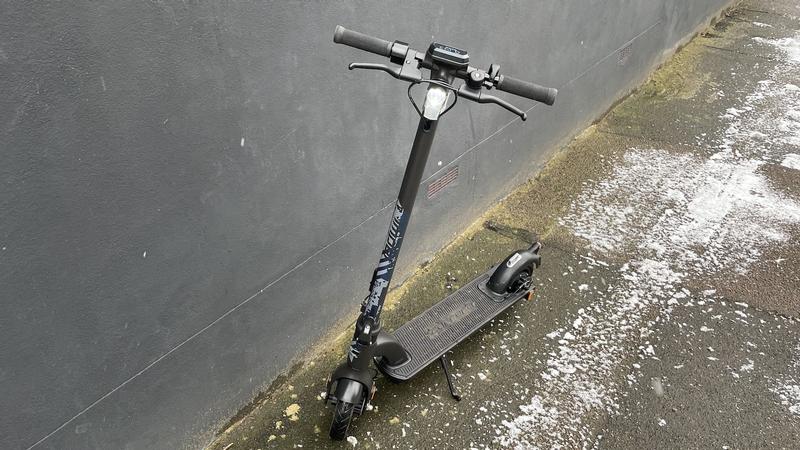 That does mean you’re more prone to getting a puncture, but being sold at Halfords in the UK, it’ll likely be easy to get a replacement – an added benefit compared to importing from overseas, and that extends to the lifetime guarantee on the frame and disk brakes too. You don’t get that kind of peace of mind when importing from overseas, and even if you do, it’ll be a pricey bit of kit to get shipped internationally for repairs.

Electric scooters are notoriously difficult to benchmark when it comes to battery performance, as there are so many factors that can have an effect – the weight of the rider, the incline of the road, acceleration, top speed and even the weather – so we at Tech Advisor go by the claimed range when looking at scooters.

That all said, the Carerra impel is-1 has a claimed range of 18.6 miles thanks to the 7800mAh 281Wh battery, which should be ideal for city-dwellers and those looking to travel shorter distances, but it doesn’t offer the extended 28-mile range of the 474Wh Xiaomi Mi Scooter Pro 2 or the impressive 40-mile range on the premium 551Wh Ninebot Max G30, although it’s worth noting that they come at quite the premium compared to the Carerra.

I haven’t had any complaints about range during my time with the scooter, managing multiple multi-mile trips before needing a top-up, but I can’t stress enough that this will vary.

When it does come to time to charge, it’ll go from flat to full in around four hours – a big improvement on some rivals that can take over six hours to fully charge. 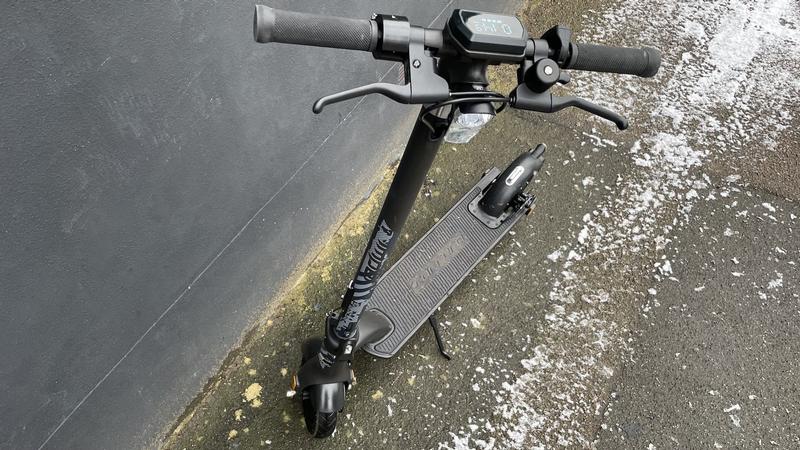 At £399 in the UK, there’s no debating that the Carerra impel is-1 offers great value for money compared to the most recent releases from Xiaomi which raised its offering from the affordable into the mid- to high-end. There’s decent range, a fun riding experience and you’ll get all the extra security features not available on most of the competition.

The Carerra impel is-1 doesn’t have a release date just yet, but once it is released, it’ll be available exclusively from Halfords.

There’s not a lot to complain about the Carerra impel is-1 – it looks good, it’s nippy thanks to the 350W motor, and, thanks to a dual braking system, it stops just as quickly too. The focus on security is unique too, offering a built-in immobiliser and integrated cable lock to help deter thieves. There’s also a lifetime guarantee on the frame and disk brakes on offer from Halfords, giving you better peace of mind than importing from abroad.

At £399, Halfords could be on to a winner with the Carerra impel is-1.