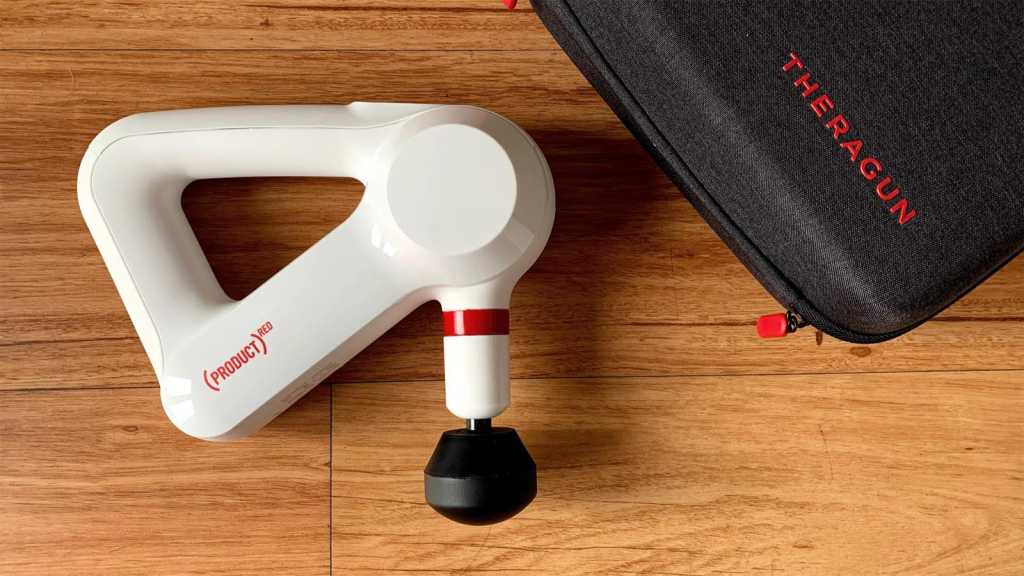 The Theragun Elite is great at what it does, but at this price you’ll really have to need it to make it worth the outlay.

Theragun has become like Fitbit in being the brand that defines a category. Though percussive massage guns are still relatively new, you’ll hear people talking about buying a Theragun when they really mean any massage gun.

And if you haven’t used one before, the easiest way to describe it is a battery-powered electric hammer which hits you up to 2400 times per minute with a foam tip.

The Elite sits one rung down from the top of the company’s product ladder, the Pro being the flagship. It doesn’t have the adjustable-angle arm of the Pro but it many other respects it’s similar. It has the same 16mm amplitude – the distance the attachment moves up and down on your skin – and a 2400rpm maximum speed. 16mm is more than most other massage guns, and the company says this allows it to reach 60% deeper into tissue.

There’s a choice of black, white or Product (Red) versions, the latter meaning Theragun donates 2% of the price to the Global Fund to fight COVID-19 and HIV/AIDS in sub-Saharan Africa.

It has the patented triangular handle which allows you to grip it in various ways and more easily treat different muscles. It’s 1kg weight is perfectly balanced so you can hold it without it wanting to tip one way or the other. 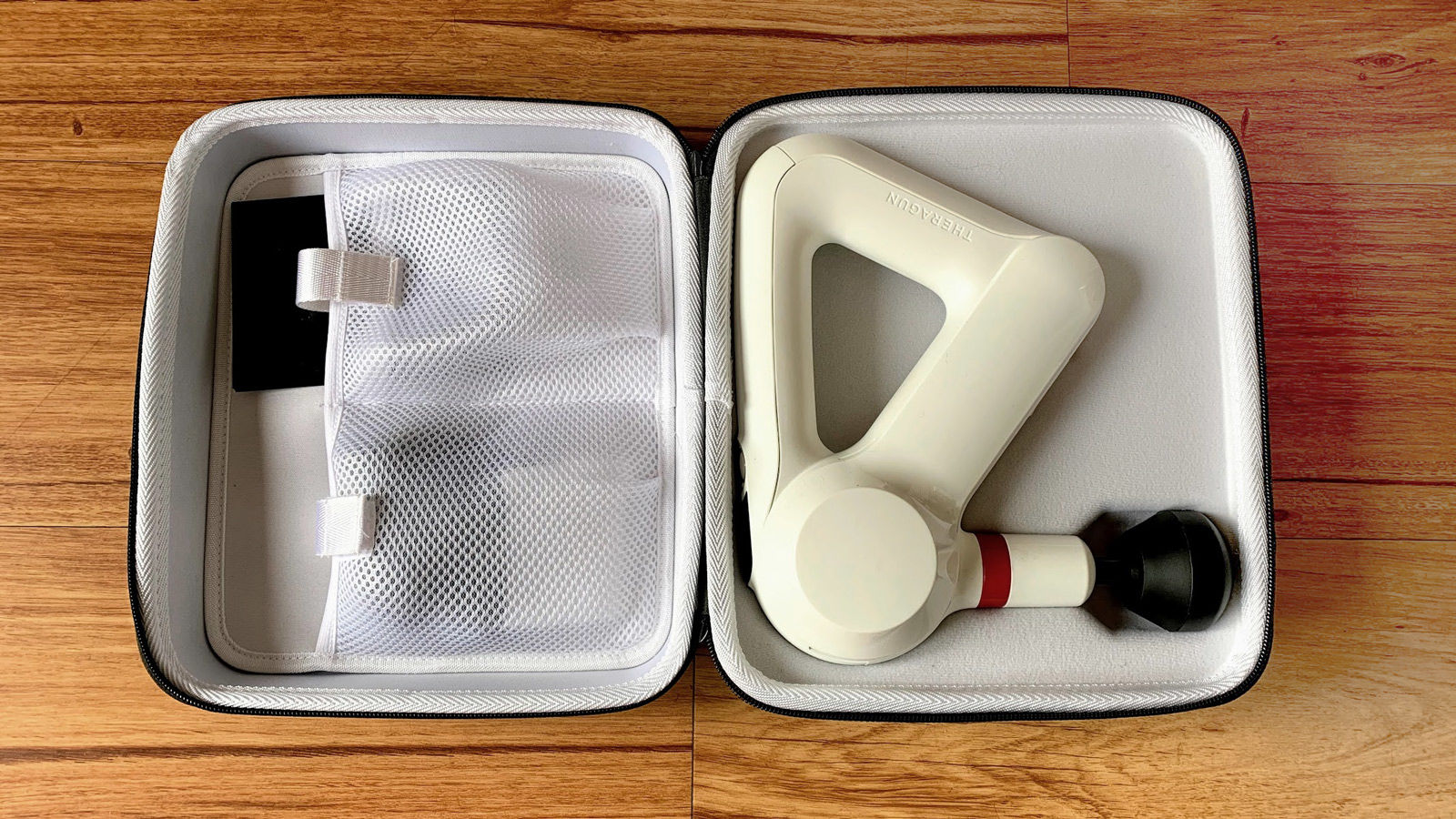 Initially designed as an aid for recovering from a motorcycle accident, the tool is now multipurpose and can be used before, during and after workouts, as well as for massaging muscles stiff from a hard day’s working from home – where ergonomics are often lacking.

Theragun is keen to point out that its devices are percussive therapy tools, not vibration therapy as some of its competitors offer.

The difference between the two is subtle at best. It’s the higher amplitude and stall force of 40lbs which elevates the Theragun Elite to the percussive category and enables it to release tension deep within tissue. Plus, the 2400rpm speed is what you need to override pain signals in your brain.

An OLED display shows the current rpm – you can use the controls to adjust it down to 1750rpm – and it also shows the level of force. You’d think that was redundant, but the oscillations can make it difficult to know exactly how hard you’re pressing. 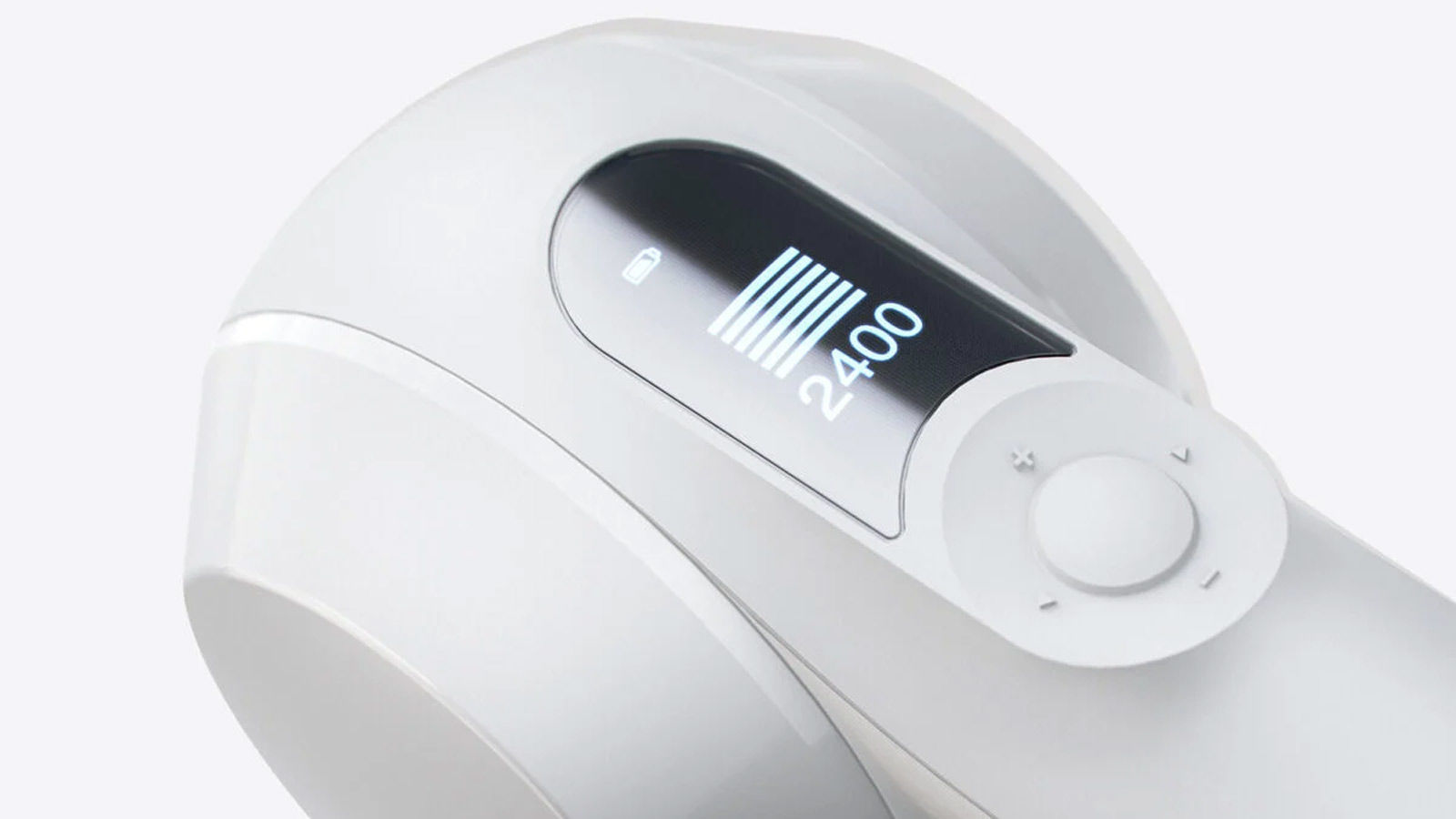 Theragun says it has made the Elite a lot quieter than previous models, but it’s still fairly noisy compared to other guns and defaults to its maximum 2400rpm which is of course the noisiest mode. It’s not deafening, but unlike the Sportneer, say, which you could use while watching TV, the Elite is a bit too loud for that.

Battery life is claimed to be 120 minutes, which is plenty for a good few days of use. A single charge was enough to last the entire time I spent testing the Elite over a fortnight.

There’s built-in Bluetooth so you can install the Therabody app and pair it with your phone. This is useful for beginners as it has various programs which show you how to use the device and for how long depending upon what you want to do with it.

These are broken down into various categories: warmup, recovery, ailments, lower body, upper body and lifestyle (including work from home, jet lag and others). 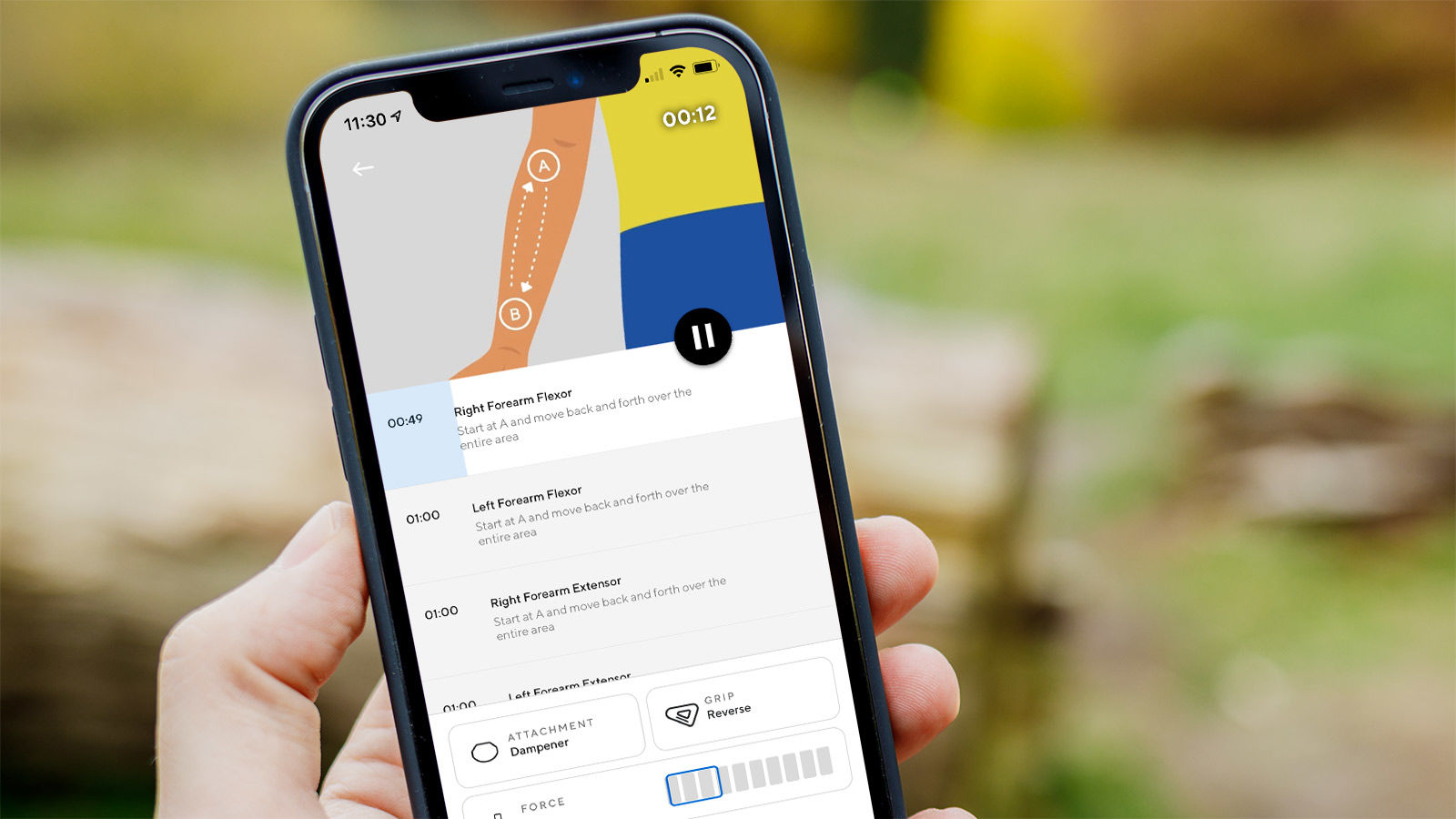 Pick one and it will tell you which attachment to use, how to hold the Elite and how long it will take.

When you start the program it set the Elite to the correct RPM automatically and run through a series of timed steps with diagrams at the top showing where and how to operate the device.

It has a rating of 2/5 on the App Store and this appears to be mainly down to sign in and connectivity issues, of which I had none. However, some of the criticism is justified. The diagrams at the top aren’t always clear: it’s hard to tell whether the person is facing you or facing away and if you don’t know your flexors from your extensors, you’re going to struggle.

“See more benefits with Dr. Jason” videos are included with each workout, which could solve this, but they don’t show the various movements, so are far less useful than they could be.

Where sections require you to treat different areas for 10 seconds, there’s no indication when those are up, and it can be tricky to time this in your head. Breaking up the bar into three colours would be one way to easily fix this.

Similarly, if you need to look at the gun instead of the app, you won’t know when to move to the next step – audio cues would be very useful here.

The force meter is the most useful aspect as it tells you how hard to press on each step.

There’s no denying the punch that the Elite delivers: it’s a powerful device. Depending upon your pain threshold you might find it uncomfortable to use on tender muscles. I must have failed to get to grips with how to use it properly as the 2400rpm setting didn’t override any pain signals when working on sore biceps.

Using it to warm up muscles before cycling was efficient and felt invigorating. It also proved effective at relieving stress and dealing with tense shoulder muscles after a day’s work. After using it for just a few minutes you really do feel calmer and less tense.

You’ll mainly use the Dampener attachment, which comes pre-fitted in the box, but there are four others which can be used for specific muscles and areas including a wedge-shaped on and a pointy one which looked too painful to even try. 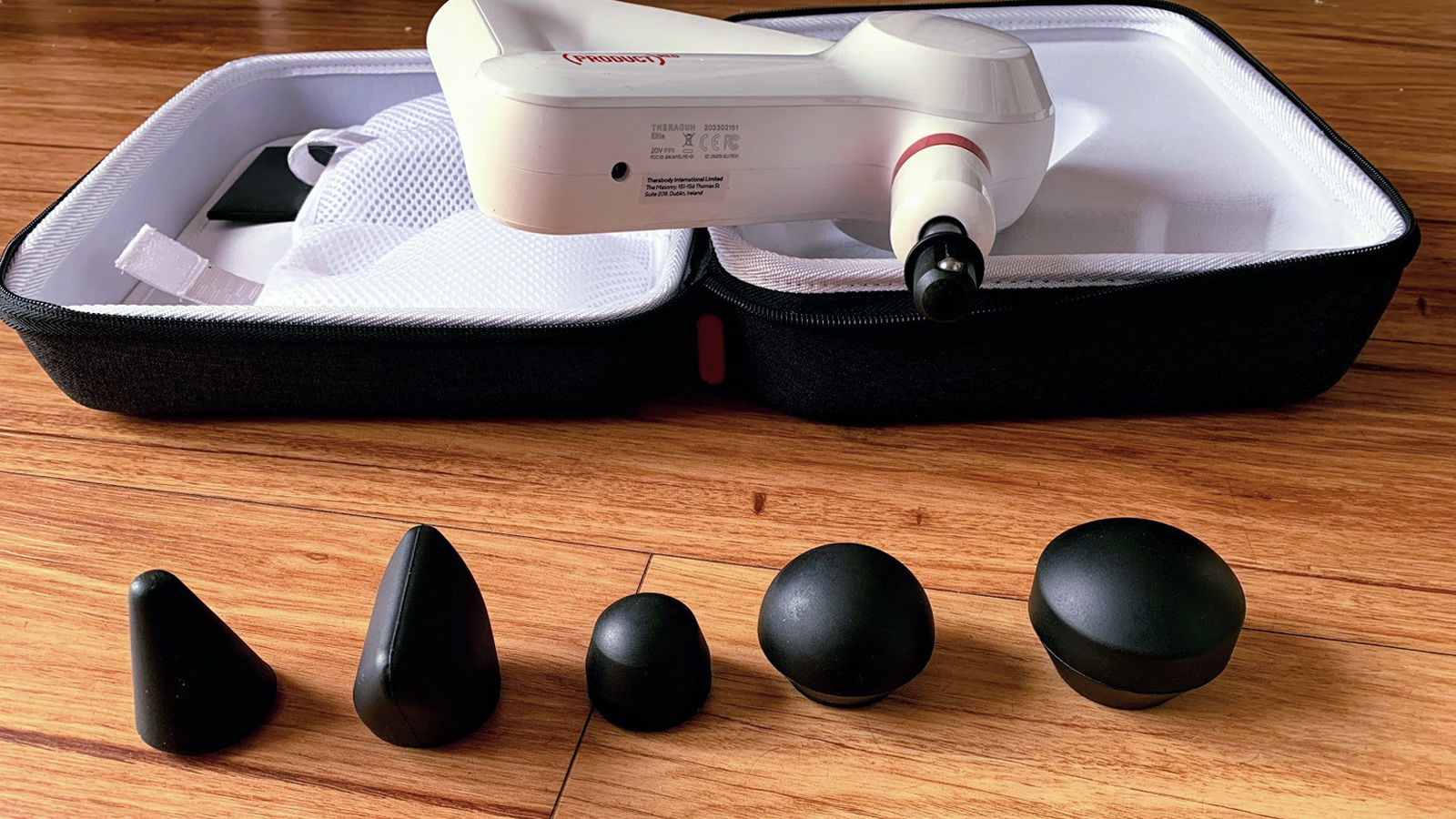 At £375 / $399 from Theragun the Elite is more expensive than most of its competitors, though you could argue that, being a premium product it’s no surprise that it has a premium price.

The Theragun Prime is £100 cheaper and offers similar specifications – a simpler display and 30lbs of force instead of 40.

If you’re an athlete and need to warm up and recover regularly, the Theragun Elite might be well worth the outlay. For consumers, it’s overkill and you can get a vibration therapy gun which will likely deliver the benefits you’re after for considerably less money. You could of course use traditional methods, such as stretching, or an actual massage, to get the same benefits. But as a DIY alternative to a massage, it’s very effective.