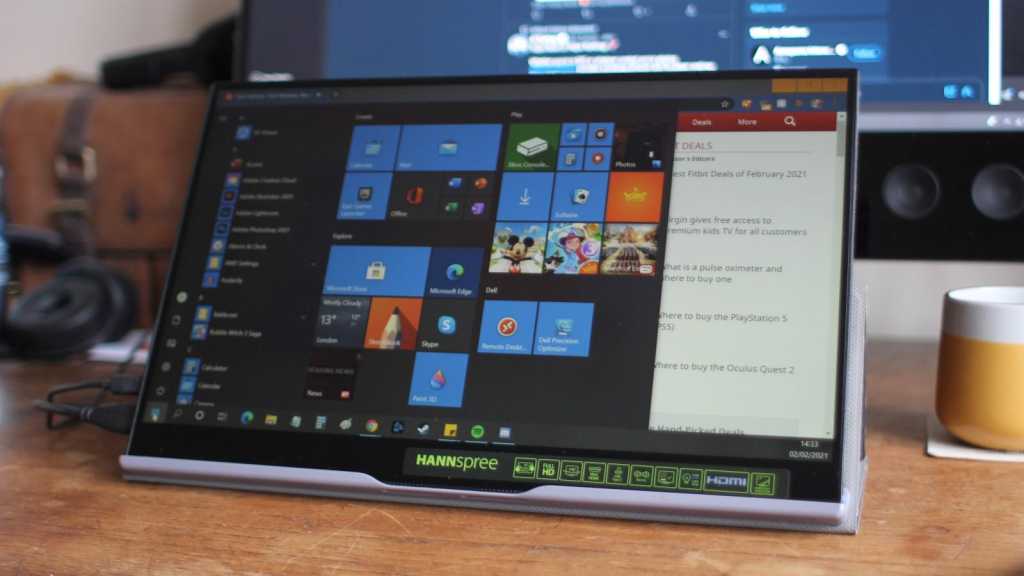 It might not tick all the boxes but Hannspree has made a decent option for anyone looking to get a full-size portable monitor with a touch-sensitive panel.

A portable monitor is arguably one of the most useful displays you can buy and Hannspree has an excellent option to consider in the HT161CGB.

It’s touted as one of the lightest full-size portable monitors around and also has many strings to its bow including USB-C, stereo speakers, 10-point touch and a Full HD resolution.

The HT161CGB is much like a tablet in design, although not when it comes to the naming system so we’ll have to stick to this clunky model number.

It’s extremely thin for most of the profile at just 11mm thick and gets a little thicker towards the bottom a bit like the design of Amazon’s Kindle Oasis. This makes the monitor feel very premium, as does the metal casing and small bezels around three sides of the display. 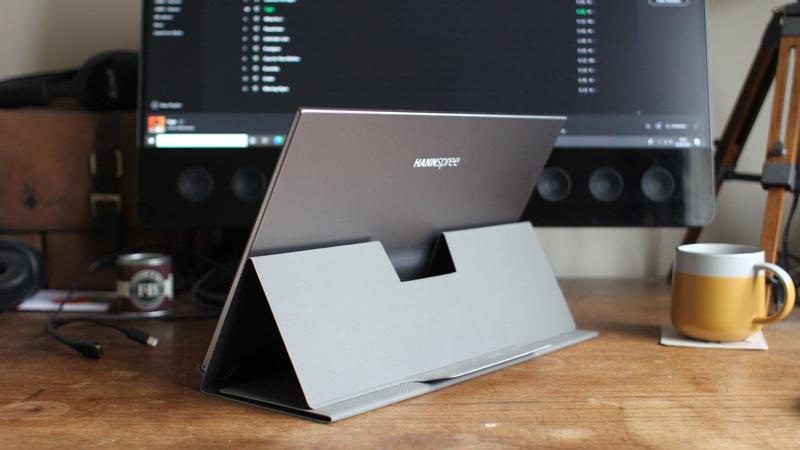 At just 770g, it’s not going to make much of an impact in your bag but note that the design doesn’t have a built-in kickstand like the Lenovo ThinkVision M14, which is also 200g lighter if a 14in display is large enough for you.

The lack of any kind of stand means you’ll need to use the supplied case to prop the HT161CGB up. It folds much like many tablet cases and the monitor snaps into place with magnets. While it closes up to protect the display during travel, it’s fairly bulky and there’s only one viewing angle available. 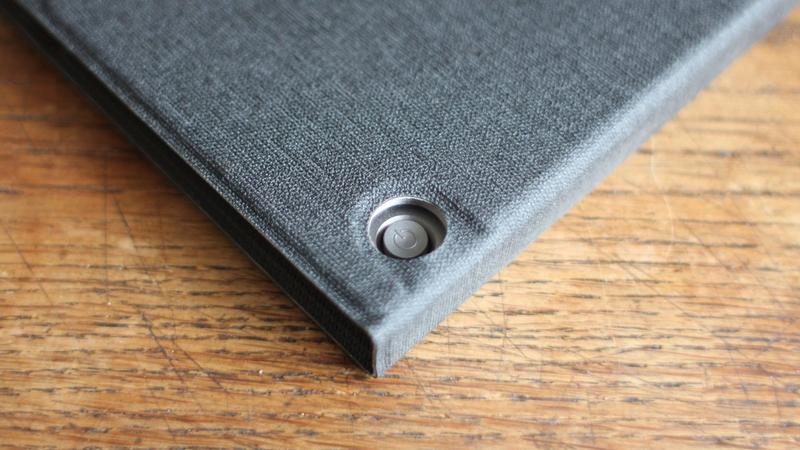 This case also means you have to use the control joystick through a hole. The joystick is used for power and to change settings like brightness via the menu and is incredibly fiddly to use with the case on – I lost count of the number of times I pushed the button in for ‘ok’ while simply trying to move in a direction.

Another issue – at least I can’t figure it out – is that you can’t change the default brightness. As the HT161CGB starts at just 10%, this is too dim for the vast majority of situations so needs pumping up every time.

This model supports touch input up to 10-point but if you don’t think you’ll need that then you can opt for the non-touch HL161CGB. With toughened glass front, the monitor is glossy but I haven’t had many issues with reflections. Viewing angles are also good, quoted at 170-degrees. 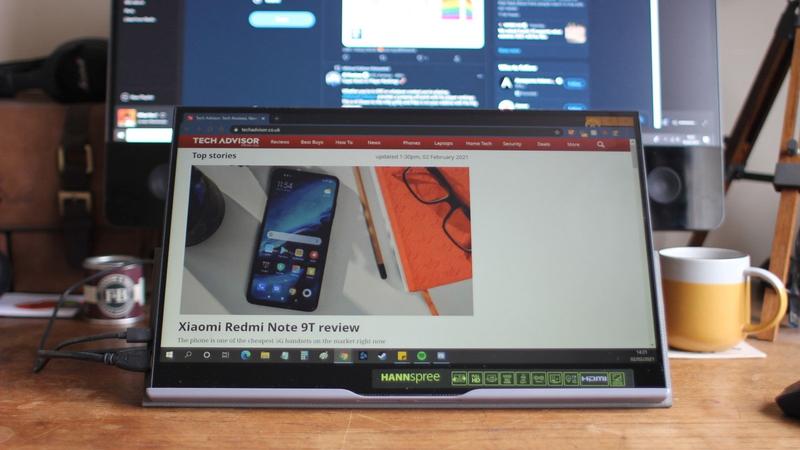 Oddly, Hannspree quotes two different brightness levels in the specs. One at 250 nits for the panel and 220 nits for the monitor. Well, using a SpyderX Pro colorimeter, I measure the peak brightness of the HT161CGB at 200 nits.

Also unusual is the complete lack of colour gamut figures. Regardless, the SpyderX Pro reveals that the display can manage 64% of the sRGB spectrum and 49% of both AdobeRGB and P3. Those figures are not great and perhaps why Hannspree avoids mention them.

While the display doesn’t look washed out, the performance means creative professionals working with colour won’t be able to use it for accurate work, although that’s perhaps unusual for a second monitor anyway. 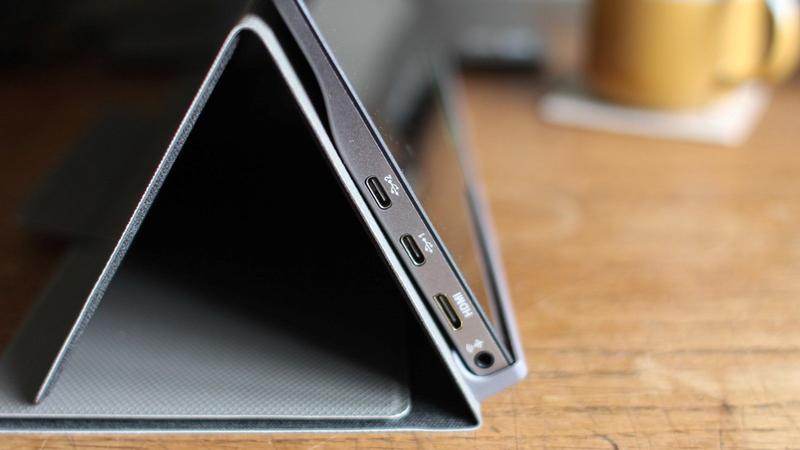 All the ports sit on the left edge and you get mini-HDMI for starters with two USB-C (3.1) ports as well. Note that if you’re going to use the HDMI port for input, the monitor also needs power via USB.

Three different cables are supplied so you should be all set for most scenarios and there’s also a headphone jack too which could come in handy.

If you plan to use a portable monitor for a range of tasks then the HT161CGB has lots of different modes available: Standard, Game, Movie, Web and Text. There are a number of further gaming modes, too, including FPS, RTS and MOBA along with three you can customise.

A portable monitor isn’t typically ideal for gaming, though. The HT161CGB has a response time of 15ms which isn’t ideal but will be fine for casual gaming. 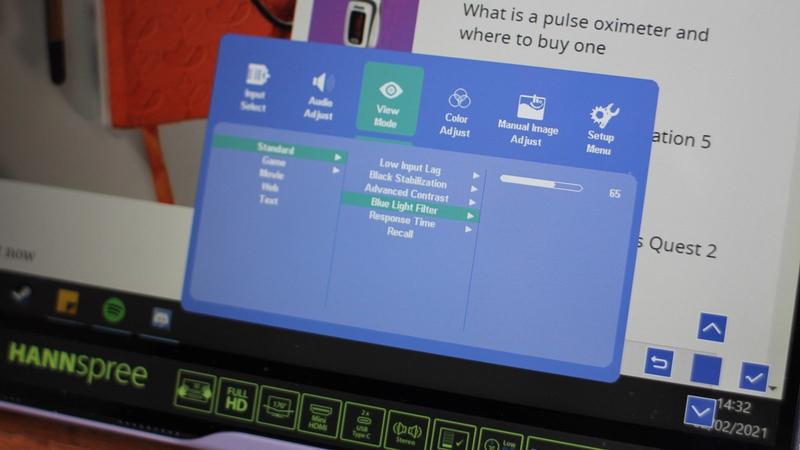 Something well advertised is the Low Blue Light mode but this doesn’t have a dedicated mode or button. Instead, you’ll have to dive quite deep into the menu and choose how strong you want it to be on standard or game modes.

It’s unusual to find stereo speakers on a portable monitor but Hannspree has found the space. They might be stereo but sit right next to each other in the middle of the bottom edge so don’t expect to actually get a sense of a stereo field.

They’re also only 0.5W each so produces a very weedy sound meaning you’ll only want to use them when absolutely necessary.

The official price for the Hannspree HT161CGB is £249 and if you don’t need touch input then the HL161CGB is more affordable at £199.

You can buy the monitor from the likes of Ebuyer, Amazon with the non-touch model available from those same retailers as well as Viking Direct and Technoworld.

At the higher prices, it matches a key rival in the Lenovo ThinkVision M14. Something much cheaper if you’re cash strapped is the Acer PM161Qbu – it’s also 15.6in Full HD but comes in at £169, although you can get it from Amazon for just £105.

At the same price, it can’t quite beat the ThinkVision M14’s portability and clever design but there’s a lot to like about the Hannspree HT161CGB.

If you want a full-size monitor with a touch-sensitive screen then this is easily one of the best on the market. The display offers a high-quality picture inside a sleek and slim frame. It has a good set of ports and even speakers if you really need them.

The main downside here is the reliance on the case as a stand, which only has one viewing angle and makes the control joystick on the back of the monitor very difficult to use.