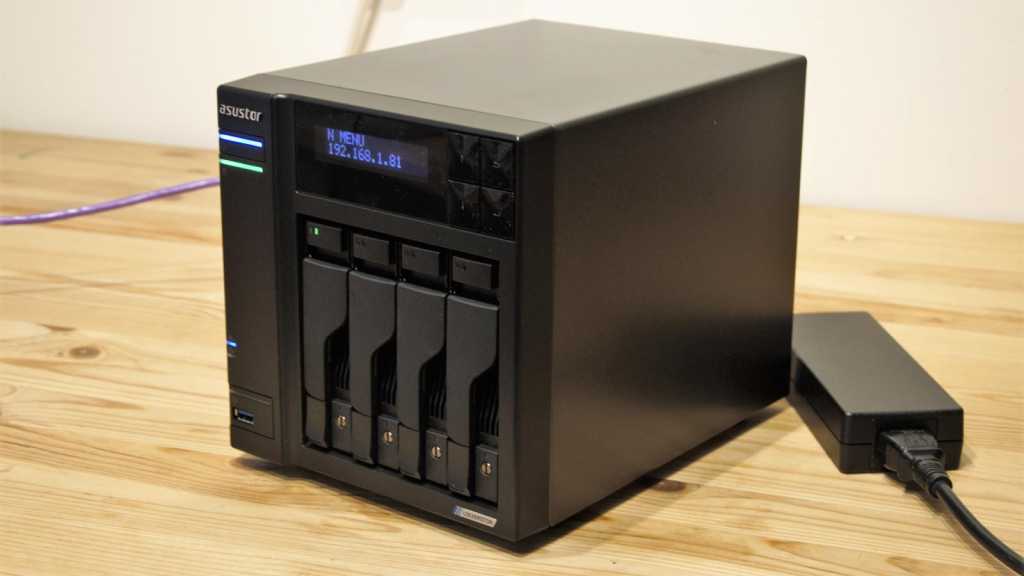 With an impressive set of specs, plenty of NAS enthusiasts are going to be keen on owning one of these. It effectively leapfrogs the glacial increments of other brands and unashamedly aims to be the best Synology alternative.

Asustor, as the name hints, is a subsidiary of Asus and was established in 2011 to develop cloud networking (NAS) and video surveillance solutions.

Ten years later, this brand has established a reputation for delivering well-made and specified hardware for both small and medium businesses and home users.

Asustor has recently released some new products into its ‘Power User to Business’ range, and I’ve been testing the Lockerstor 4 AS6604T, a four-bay NAS with many desirable features.

Removing the AS6604T from its packaging for the first time, it’s almost impossible to not compare this hardware with that made by the market leader, Synology. And, the AS6604T uses much more metal and less plastic than a similarly priced four-bay NAS by that brand.

The drive trays are mostly metal, and the inclusion of an informative display panel elevates this design over many competitor designs.

It might seem a minor point, but being able to see the IP number that the box was given by the network enables rapid access to the web interface without the need to use a utility or other methods to extract it.

The layout is nothing radical. It sports four vertically mounted drive trays on the front, along with USB 3.0 port and a few buttons, and two more USB 3.0 ports on the rear along with dual 2.5GbE LAN ports and a single HDMI output.

With HDMI included it is possible to connect a mouse and keyboard directly to the unit and work on the system like any other type of computer running a Linux distribution.

A large rear mounted fan draws air from the front and expels it rearward to keep the drives and system cool, and is temperature-controlled.

The specification states that the system can take two M.2 NVMe drives internally, and on some NAS boxes I’ve seen removable panels to access the M.2 slots. On this design, three screws must be removed to detach the case slid back to install these, and also access the spare DDR4 memory slot.

A removable panel would have been better, but realistically most users will not be adding or removing these items on a regular basis, so it’s hardly a huge inconvenience.

What none of this initial exploration of the AS6604T reveals is the amount of power that Asustor put in this box, and how in some respects it betters many of the products it is pitched against.

I’ve seen NAS boxes in recent years that had plenty of internal power, but were unable to effectively get that performance to the users they support. It’s an excellent selling point to put a quad-core CPU and lots of RAM in a NAS, but if it mostly sits idle because of a network log-jam, then it’s often superfluous.

At this price point, others have gone with four 1GbE LAN ports with the intention that these can be aggregated at the switch to provide more bandwidth to distribute to the connected users. A few have gone 10GbE, though that it an expensive technology to deploy.

Asustor has instead gone with a more affordable option with two 2.5GbE ports, giving an aggregated potential of 5Gb/s when used with a suitable Switch. And, by ‘suitable’ a solution like the inexpensive Netgear MS510TXPP is what I have in mind.

But interestingly, there is even more bandwidth in this hardware, if you know where to look.

This NAS has three USB ports all with the USB 3.2 Gen 1 (5Gb/s) specification. One is on the front with an associated button that can copy the contents of any USB drive plugged into the internal storage, and the other two are on the back.

But these USB drives won’t only work with USB storage and printers, as you might expect, but with a much wider selection of USB peripherals than most NAS boxes support. These include Wi-Fi and USB to 2.5GbE LAN adapters, expanding the available network bandwidth even further.

The obvious question is why didn’t Asustor engineers give this box a PCIe slot, enabling full 10GbE and 2.5GbE LAN adapters to be added to it? Well, it did include a PCIe slot but used it for the NVMe adapters.

A future version of this design might allow that to be swapped out for a card, but at this time those that want more network capacity should consider the USB adapter pathway.

One interesting note about the NVMe M.2 slots is that on other hardware I’ve covered these can only be used to cache the physical drives (or SSDs) in the standard slots. But Asustor never applied that distinction, therefore an NVMe drive can be defined as a cache resource or an ordinary drive like any other mounted on the unit.

With the limited capacity of NVMe storage currently, using it as storage might not appear a good idea. But capacities are growing, and it might be handy to use it as lifeboat storage during a reconstruction, or as a high-speed backup location.

Another notable feature is the HDMI 2.0 port that can output 4K video at 60Hz for anyone wanting to use this NAS as a media server. Asustor has a specific HDMI interface, Asustor Portal, that provides quick access to a selection of streaming services and functions. To make the most of HDMI output, a USB connected remote control is required, and that is an inexpensive item to add.

But that’s not an apples-for-apples comparison, as the DS420+ only offers 2GB of RAM (upgradable to 6GB). Has only a dual-core CPU, can only use its M.2 slots for cache, and has two 1GbE LAN ports, not 2.5 GbE.

For those wanting a cheap NAS box, the AS6604T doesn’t offer the same amazing value for money as the TerraMaster F4-422, which undercuts even the DS420+ and includes 10GbE networking.

But for the specification, the AS6604T combines a high-quality solution and great value for money. And, for those that like the style, but only need a dual-drive solution, Asustor has the AS6602T that sports a nearly identical specification but costs $150 less.

This pricing probably pushes this design more to business users, even if many home users are now transitioning into 2.5 GbE networking as the affordable alternative to 10GbE hardware.

Check out our chart of the best NAS drives to see all your options.

There is plenty to like in this design. It doesn’t slavishly follow what Synology is doing and injects some desperately needed independent thinking in what has become a stagnant sector.

With a difficult to fault hardware package, function-based styling and excellent flexibility, there are many NAS scenarios that the AS6604T fits like a glove. It ticks many of the critical boxes; supporting the BTRFS file structure, NVMe caching, aggregated LAN connections, a dedicated HDMI 2.0 port and excellent VM support.

But, and this is a problem across the Asustor range, the Asustor branded application suite doesn’t have the range or polish of its Synology counterpart. And, frankly, that’s the standard by which all NAS are judged these days.

This one weakness stops the AS6604T being a direct competitor to the Synology products. Because in terms of the hardware specification and corresponding price, this is undoubtedly better value.

Any potential purchaser needs to decide if the application suite of this product covers the intended purpose, and if the AS6604T covers those bases, give it some genuine consideration.

For those where the feature set overlaps their requirement, the AS6604T offers an excellent platform that can perform multiple functions effortlessly. Asustor has neatly positioned it to exploit the transition to faster LAN speeds already underway.